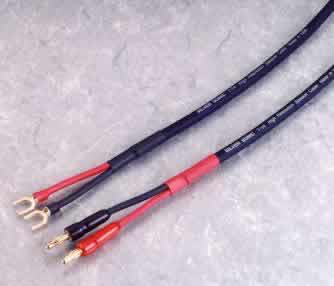 Most mass-market, audio retail outlets in the Southwestern United States sell standard, 10-gauge Monster Cable as their "top of the line" speaker cable. High end audio salons sell what they refer to as "cheap cable" for people on a budget, usually Monster Cable© or a generic equivalent, and several varieties of 'proper cable' for people with larger bank accounts. As I paid for my most recent set of speakers, the proprietor of a local high end salon tried to sell "proper" cables to me. At $112 USD per meter, he considered his favorite cables to be a bargain.
Adding up the components, we had: 2.5 meters of cable per side, plus connectors and sales tax, totaling well over $600 USD for a set of speaker cables. That was nearly as much as I paid for the speakers I had just purchased from him. There had to be a better way.

To someone with my budget, the improvement in audio quality attained by the use of high end cables as opposed to affordable cables is simply too small to justify paying the high price; for the cost of an expensive set of speaker cables, I could replace my digital and analog sources, thereby achieving a far greater improvement in sound quality.
The question arises: are there any affordably-priced cables that will make a significant improvement in my system over standard, mass-market, Monster-type speaker cables?

D. H. Labs, located in Jupiter, Florida in the Southeastern United States, produces cables for hi-fi audio use at prices that are not much higher than typical, mass-market cables. Of course, the company claims the cables to be high quality, but are they worth the extra cost above standard cables? Better still, could they be a bargain for the budget-minded, audio enthusiast?

What is Silver Sonic Cable?

Silver Sonic T-14 speaker cable, manufactured by D. H. Labs, contains a pair of 14-gauge, stranded wires composed of silver-plated, oxygen-free copper (OFC). The two conductors are covered with color-coded Teflon© insulation. The insulated conductor pair is surrounded by a "vibration damping" filler material, essentially a synthetic fibrous material.
The cable assembly is held together with a dark blue sheath labeled with silver writing. The complete speaker cable is only about one-quarter the diameter of typical, 10-gauge, mass-market cable. It is simple looking and does not have the appearance of "high tech".

Silver Sonic cable was obtained in bulk. Two pairs of gold-plated, banana plug cable ends and two pairs of gold-plated spade ends were obtained at the same time. The cables were cut to equal lengths, at 2.4m each. One pair of banana plugs, for the amplifier ends, and one pair of spade plugs, for the speaker ends, were then soldered onto each cable.
Cables are also available in pre-cut lengths with terminated ends. While the B&W speakers used for these tests can be bi-wired, only single lengths of cable were used - this was a test of budget-priced cable, and bi-wiring would immediately double the cost.

Positive Impressions
My initial impression of the Silver Sonic cables was that they lacked bass. It seemed as though bass was lost in the changeover from heavy-gauge, mass-market cables. After several tests, what became apparent was that the Silver Sonics did not have less bass; they had cleaner bass. The bass extension was still intact and all the bass was present, but it was tighter and better controlled with the T-14 cable. Bass drums sounded deep and clean instead of booming and resonant; kick drums sounded quick and sharp. Bass response with the heavy gauge, standard cables tended to sound a little bloated and imprecise. This was an impression that was not welcome, particularly when using a Dynaco ST70, an amplifier that tends to bloat bass, even under the best circumstances.

In the mid-range, the Silver Sonics again sounded cleaner than standard cables. However, unlike the bass, the mids seemed to have a stronger presence with the Silver Sonics. The mids did not sound as though they were being accentuated, but rather, the mids sounded less muted and more natural. The Silver Sonic Cables also had clearer and cleaner highs. The highs sounded slightly brighter and more detailed. LPs played through the ST70 had cleaner, smoother, and more musical highs with the Silver Sonics.
Well-recorded CDs sounded better than ever. The overall sound seemed more balanced and neutral with the T-14 speaker cables.

Changes to the sound stage were more subtle with my system. The soundstage seemed somewhat broader and slightly deeper with many recordings, but remained unchanged with others. Three-dimensional imaging was noticeably clearer and more distinct.

The Silver Sonic cables have a relatively small cable diameter compared to many other speaker cable designs. They will fit more easily behind and through some small places that are a tight squeeze for larger cables.

Negative Impressions
For the price of these cables, it is hard to complain about them. Still, the biggest problem observed with the Silver Sonics during my evaluaion was that they sometimes can be a little too revealing. Using the Silver Sonic T-14 cables in combination with a Decware SE84B (a very fast and detailed, single-ended amplifier) and B&W speakers (which sometimes glaringly reveal system and recording faults), poorly recorded CDs can sound less than pleasant.
I believe this would also be a problem with most solid state amplifiers, but the Marantz I sometimes use during evaluations was not available for confirmation.

The Silver Sonic Cables are very stiff, resulting from their double plated construction. A permanent kink can result from bending the cable too sharply. A kink of this type may result in physical damage to the silver plating. Would minor damage of this type be audible? Probably not, but that question can be answered only by deliberately kinking, bending, and otherwise abusing a sample of this cable and comparing it with an undamaged sample, something I am loath to do to $75 cables. The lack of flexibility could be a liability in restricted areas around some audio installations.

D.H. Labs Silver Sonic speaker cables offer great value for the money. They do what speaker cables are supposed to do, which is, to transmit as much signal as possible between amplifier and speaker while adding a minimum of sonic artifacts, and they do it at a price that is not only reasonable, but a genuine bargain.
I look forward to sampling their interconnect cables in the near future.