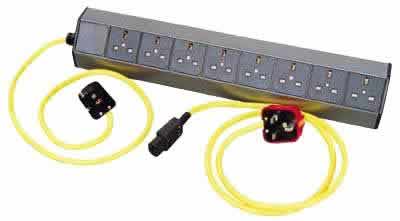 As I sit in my listening position facing the stereo the thing that catches my eye isn't the polished beauty of my IPL speakers nor the gleaming chrome of the Audion valve amps - it's the miles of cables all over the place. I (and my wife) am beginning to think one of those nice stack systems with one plug has it's attractions... (none of them musical...)

Perhaps worst is the jumble of mains leads everywhere, not helped by the inordinate number of boxes requiring juice. The Hydra helps by powering the monoblocks, preamp and CD player, but I find myself continuously running out of sockets. Adding to the misery are the French mains plugs, (designed by some faceless beaurocrat I suspect) which are simply horrible to use, often requiring so much force to go into the gang socket that they break.

I'm not going to get emotional about mains sockets but this is a very nice piece of kit. The trianguler section metal chassis offers up the sockets at 45 degrees ready for you to plunge your oh-so-British 3 -pin plug deep into their silky folds... Ehem... Enough imagery I think. But this is a lovely thing to use and I'd even think it worth installing and using British plugs and sockets for their sheer physical superiority over the continental alternative, though it has to be said each does contain a fuse, a potential weak point sonically...

The Gang socket also contains a surge protector and RFI filter claiming >50dbl attenuation at 40 mHz For most of us that sounds a good thing though there are some (Naim for example) who frown on anything placed in the mains that acts as a filter.

Lastly the gang socket is connected to the mains via one of SonicLinks own mains leads, a hefty affair of obvious quality, Silicone insulated and with silver plated conductors - note the photo shows a yellow lead, it is in fact thicker and dark grey...

As a gang socket it cannot be faulted. The sockets and casing have immense solidity yet accept the plug like (desperately searching for an analogy here...) er, you know... smooth and easy like...

It took a fair while to swap enough leads over to British plugs (they won't be going back) and the result was a fair bit tidier and probably a lot safer than the stacked gang sockets I had as an alternative. A few years back 8 sockets would be plenty but now many systems will fill them all, even my audio only system ran out - 2*monoblocks, pre-amp power supply, turntable power supply, active step-up, cd player, tape and tuner.

Changing 8 plugs, using different leads etc makes back to back comparisons nigh on impossible and so I'm going to hedge here. My critical components are all powered by my Hydra which is a pretty purist piece of kit, though you have to make it yourself. I couldn't honestly say that the Sonic Link was better, but nor did I feel anything was lost.
I could kid myself I heard differences, my Hydra I suspect is a little brighter and more forward but I wouldn't bet my life on it. However compared to cheapo gang sockets it did seem to be more open and gave the impression that a level of noise, a sort of background sheen had been removed, certainly a worthwhile improvement.

As I said before it's a nice piece of kit. It's very well made, helps protect your equipment and certainly is a lot nicer to use than the alternatives. It's also a reviewers dream :-)
Ultimately I don't think it's a major sonic upgrade compared to the Hydra, but to be honest that's not why I would buy it, it clears a lot of mess and anyone with a serious system should certainly consider it as a long term purchase.