A Drama in Seven Acts

For some years now, digital scales are quite common for measuring vertical tracking force (VTF) in a phono setup. This can be done with high precision, even with a resolution of 0.001p, which is far more than is necessary.
There are some high price digital scales available for hundreds of EURO, but the prices indicate that this typical "high end" scam. Indeed I doubt that there are persons who can hear a difference in sound when the VTF changes for 0.01p. Anyway, when a company from China asked TNT whether we would like to have one of their precision scales for review, I thought: Why not. I already had a 0.01p resolution scale. Why not have an even better one. Okay, this report is what I experienced, when I made contact with the company and ordered such a scale.

Their first price quoted was low: the 10g/0.001g model costs 28 USD. This was ridiculously low, considering the features.

Act 2 - The Postman Takes What Is His

In a second mail they added 24 USD for shipping. They said they have to use DHL as carrier. Still OK.

When it was time to discuss methods of payment, they said, they cannot receive money with credit card or paypal, only by bank transfer. Unfortunately, international money transfer to countries outside Europe is very expensive in Germany. Total costs including bank fees is 80.86 EUR.

Well, in Germany customs and VAT have to be paid for items coming from outside the European Union, so the carrier charged me for custom fees and his own charge fee 20 EUR. Now that adds up to just a bit more than 100 EUR in total. At that point I could have ordered such a scale with 0.001p resolution from ebay delivered from UK for much less. This is an interesting story about an item ordered supposedly cheap from China, getting more and more expensive until it arrives at your home.

The scale arrived in a plastic box with a 10g calibration weight, a screw driver and batteries. The screwdriver is necessary to open the case for attaching the batteries. A very short user manual makes the thing complete. This scale was to use AAA cells rather than button cells. I heard stories that some digital scales consume a lot of button cells, so I was rather pleased until now. 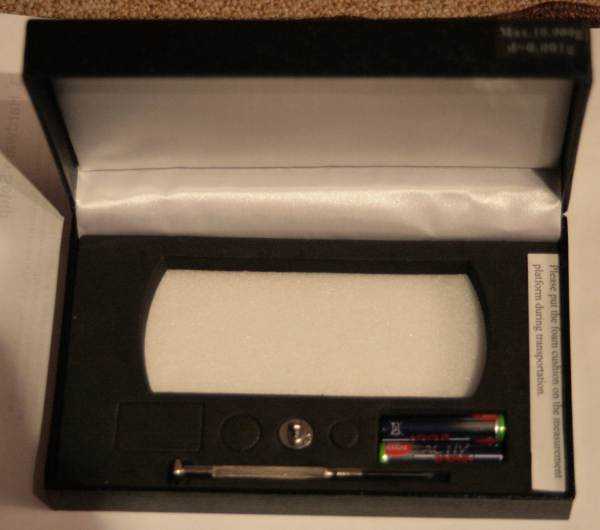 Unfortunately, the scales always showed 0.000p, regardless of weight put onto the scale bar. Only when I put excess weight (a 50p calibration weight from another scale), it showed some meaningful numbers. I tried the steps for calibration, but nothing I tried made the scale work as intended. When I reported this to the Chinese company, they sent to me another sample - free of costs, I have to add.
The second sample showed a similiar error: I had to put more than 12g of load onto the scale, before I got higher numbers than plain zero. I managed to put a screw of 12g onto this second scale, and I tried to get meaningful reading. But even when zeroed in, the scale showed e.g. 1.8p when the reading should be 2.5p, verified with a second scale.

I also reported this to China, begging them to send a sample they had tested for function before shipping, but they haven't send me another sample.

Act 6 - Inside the Scale

When I got the replacement scale, I opened the first one, to see its construction. The scale is built around a bridge of strain gauge elements. A bar is attached to this bridge. 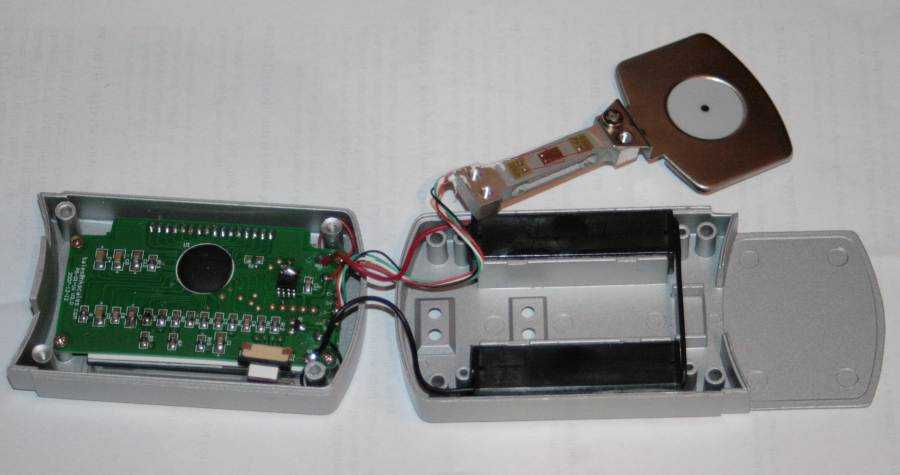 I discussed this topic with other high end enthusiasts. I was not surprised to find they experienced similiar things. Obviously complete containers of non-functional digital scales have found their way to Europe. In one case the European importer has returned a whole batch of defective digital scales back to China. In the end, after lot of hassle, they got working samples, they exist, finally.

I have learned my lesson and I have paid for it. It would be great if others could learn from my story, too.

My advice is simple: If you need such a 0.001p resolution scale, don't buy it directly from China, but rather from an European reseller, and pay with paypal. Give back any bad scale, be it non-working, or battery-eating.