The phono stage I am going to review this time comes from a recently established company in Italy and to give you a clearer view, especially for non-Italian readers, I think it would be worthwhile to give you some information about the company and the designer behind it. Going back to the early '80s, in northern Italy, close to the town of Vicenza, a group of investors decided to create a company manufacturing speakers with both excellent performance and trendy looks and finishes. The company was Sonus Faber that through several company evolutions has now become, the McIntosh Group. One of the technicians in Sonus Faber was Fabio Serblin who, in 1991, decided to create his own company Fase Evoluzione Audio that produced, until 2002, several excellent amplifiers both with its own name and also as Sonus Faber. At that time they produced a phono stage named Phonodrive that is still very well regarded today, having very low noise, a wide and deep soundstage, and sounding very well. It was the typical phono stage of the '90s with a separated power supply and a small long box with a black flat front. Rumours say it is one of the best MC phono stages (without a step up transformer) for the Denon DL 103 and I have tried to find one in the past, but it is on sale very seldom since owners don't like to part with them. In 2002 the production stopped and Fabio Serblin continued in the audio business as a designer for other brands until 2020, when he decided to reopen his businesses with two distinct brands: Serblin & Son that produces and distributes amplifiers through the traditional channel of importers and dealers and Faseaudio that sells a dedicated range, only available on-line. Faseaudio has today one product in their range and that is the Phonodrive 2.0 we are going to test.

From the first moment, you notice it is unusual. The retail price is 990€ and products in this price range tend to use boxes made from steel panels or extruded aluminum of industrial production with some customisation of the brand and logos. Here we have a product that is "solid" (architects will say "monolythic") weighing approx. 2,5Kg, made from a shell produced from solid aluminum, shot-peened and anodized resting on a wooden plinth. The feeling is of solidity, just like picking up a brick. It doesn't resonate like a bell, and the reaction to be tapped is rather muffled and deadened. Cases obtained from solid metal already exist, but they are more usually to be found in very high level pieces of equipment since they are quite expensive both in the raw material used and in the machining to produce the piece. It is the first time I've seen wood used structurally in an amplifier; the base is worked as a ladder and leaves some openings on the joint between the shell and the wood base. Design like this is good to look and it offers several advantages: it deadens vibrations in the casing, the openings allow fresh air to flow insideto be expelled from the round holes on top of the front face and, last but not least, allows construction in class 2 or double insulation which means there is no need for an electrical ground connection. European norms (UL isn't very different) have two main categories for home appliances: class 1 with earthing and safety through a differential switch and class 2 where every part under mains voltage is insulated through two layers of insulation in such a way that, in case that one level of insulation fails, the second will guarantee the safety of the user. The advantage for a phono stage is evident: no earth connection means getting rid of the noise problems that often occur with ground loops while mantaining the correct safety level. The only negative in this is that the IEC socket on the rear panel isn't the usual 3 pin but rather a 2 pin "8" shaped. There are cables available for this type of socket or, as I did, you can buy a plug and modify one of your own cables. All in all, not a big issue.

The front panel has just a chromed round switch surrounded by a crown that is red when the Phonodrive 2.0 is connected to the mains and turns white when you switch it on. It is nice looking, simple, elegant and modern; I do approve of the choice. The rear is much less attractive: two pairs of RCA for input and output, two DIP switches, one per channel, to set load and capacitance, and two small switches to choose MM/MC and an extra +6dB of gain if you have a low output MC cartridge. Preset loads for MC cartridges are 100, 400, 1000 and 47,000 Ohm but you can combine them to have also 74,80,91 and 286 Ohm. Most MC cartridges should fit well in one of these loads. In my test, I used 91 Ohm for the ZYX R1000, 100 Ohm for Shelter 901 and 286 Ohm for my Denon DL 103S. In case you want to connect an MM cartridge you can choose between + 100pF and + 150 pF. Considering that an average phono cable adds some 100pF/m you can choose between +100 to +350 pF.

If the outside is unusual, so too is the inside. One of the critical points in a phono stage is the quality of the power supply. It must supply very clean power, but at the same time have the power to cope with very strong transients. Classic power supplies have transformers that generate strong magnetic fields which can disturb sensitive gain stages. That's the reason why many phono stages have the power supply in a separate box or, if in the ame box, encased in separate compartment and enclosed with metal to reduce any interference. Using a different type of power supply can solve this problem by reducing the size of the magnetic components. For the Phonodrive 2.0 a switching power supply has been chosen which menas that you need tiny inductors. Switching power supplies are in use in some phono stages, but there are very few of them. Plenty of care has been put into the filtering of the mains and there are two power supplies: one larger for gain stages and the second smaller for the microprocessor controlling all the functions. 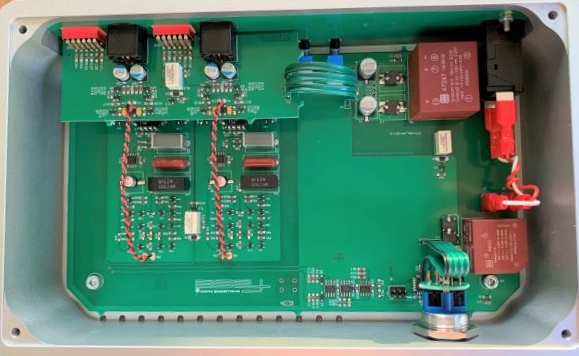 Power goes into two gain stages completely separated so, in this small case, you have a dual-mono construction: these are benefits of SMD technology that allows designers to compress circuitry saving costs in the assembly and improving the overall quality. With such a compact construction the length of the signal path between the components is reduced to the minimum. I know that at the frequencies in phono stages these effects are of second-order, but everything helps. Gain is obtained through a circuit that can be divided in four blocks:

I began my listening with the Denon DL 103Son a Sony TTS4000 turntable. My Denon 103S is heavily modified since it is without the white cover, it is mounted on an HD graphite structure, and has a boron cantilever with a Shibata stylus. The sound reminds me of a Shelter 501, but with just 0,3mV output against the 0,5mV of the Shelter. Some hours of burn-in with the Cardas test record and we are ready to start listening to the first record with Fleetwood Mac's "Rumours"; side 1 second track "Dreams", the refrain of the song is a harmony between two female voices (Christine McVie and Stevie Nicks). Usually, you can clearly hear that there are two distinct voices, but they seem to come from the same point in space as if both were together in the center of the stage and singing on the same microphone. With the Phonodrive 2.0 the two voices are in the center of the stage, but a half metre apart asif they were using two microphones. It is a record I have known for at least40 years and this is a detail I had never heard before. Immediately you notice a stage that is as wide as your room, but also deep, at least half of the room. With the Blood Sweat & Tears' song "Hi-De_ho" the lead voice is in the middle of the room, bass and drums center, but next to the wall in front of me. Every instrument has a precise position and is of the right size and with the right harmonic content.Dynamics: "Ride across the River" from "Brothers in Arms", by Dire Straits: simply explosive as it should be. Listening to a better cartridge and I move to my ZYX R1000 Airy 3S on a Denon DP 6000. It is the low output version of only 0,24mV: again no problem to the Phonodrive 2.0, just two dB more of gain in the input of my line stage to have the same listening volume as before, and I have reduced impedance on the Phonodrive 2.0 to 91 Ohm. Now the amount of detail grows exponentially. Muse's "Madness", Outlaws' "Green Grass and High Tides", Grateful Dead's "Sugar Magnolia", Rolling Stones' "Beast of Burden"; the list of all the records I put on the turntable is long and boring, but believe me, I spent several hours listening again to old records, always asking myself what new things I will find in them. It did manage to give a credible stage also to AC/DC records without losing one gram of punch, as it should be. It isn't a "politically correct" sound as sometimes you can hear in newly released components: here if you want to make some noise, you have it with the feeling that it has everything perfectly under control.

Consumption of electricity is negligible. In stand-by it uses less than 0,5W as required by 2013 European norms. If you want you can leave it always on, but it sounds almost perfect from cold. In use it doesn't get warm, and I never had any issue with interference or EM disturbances. You don't need any serious tweaks: a good power cable is always a good idea and you can tinker with soft feet or with spikes wit the usual effects, but it is more a game of adapting the sound to your tasteor your system rather than something absolutely necessary.

Defects: it is tough to find any. Of course a multi-function display or a remote or some independent inputs to connect different cartridges would be welcome, but for less than 1000€ you can't ask for more.

I'm going straight to the point: it could be priced twice or more the current level and listening to it nobody would complain. Right now this is a good deal and for many this might be your definitive phono stage so I warmly recoomend you to have a good listen to it. I don't pretend you all will like it, as I have, but for sure it will be a very interesting listening session.
Fabio Serblin told me he is thinking about some future developments (balanced circuitry, etc) but, to be on the safe side, I bought the one under test. I won't sell any of my current phono stages, but the Phonodrive 2.0 deserves a place in my system.