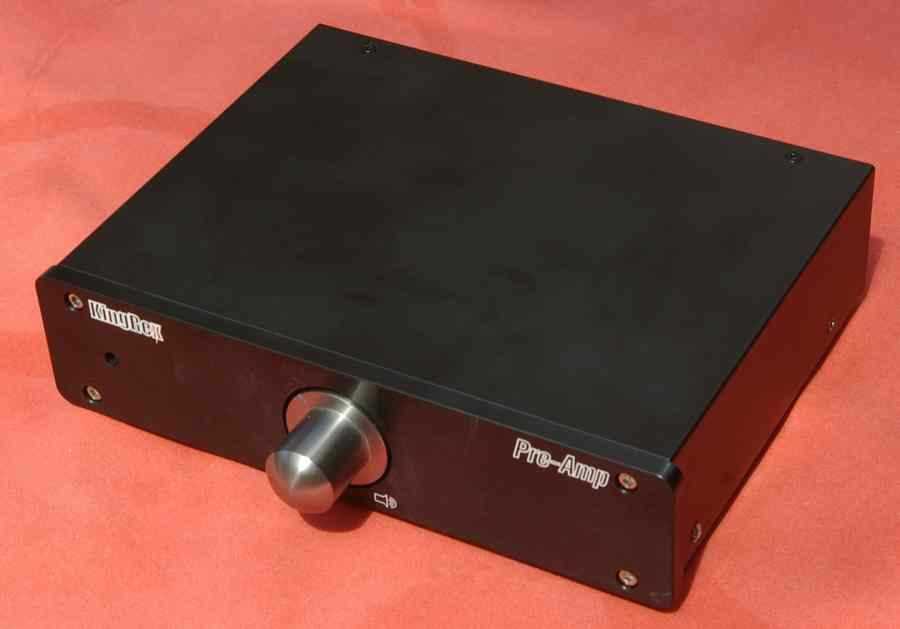 A while back I had the pleasure to sample the KingRex T20 power amp, one of the best sounding, and certainly the best built of the current flood of Tripath based amplifiers. In fact coupled with the exquisite JB3 speakers they've produced real hi-fi in my office. However that said, anyone reading my original comments on the T20 will see that though great for the money and likely to please many, it wasn't quite my cup-of-tea.

Beyond that, the one snag with the T20, and quite a few other such amps is that it's a single-input power-amp with a variable volume control. Now this is fine for those out there using the amp with a computer as source (as I did much of the time), but to classed as something relevant to most hi-fi users it needs more than one input.

So you can imagine I was pleased when KingRex sent me their latest baby, a tiny matching pre-amp. What I expected was a pot-in-the-box with a switching input, how wrong could I be...

First let's get the build quality issue out of the way before we start on the serious stuff.

As with the power amp this is a little jewel. Think micro 'Cello' meets Lab 47 and you'll get the idea. The machined volume knob was silky smooth, beautifully finished casework, good quality binding posts etc etc. Small hi-fi like this, if done properly can be unbelievably classy and a stack of pre/T20/power supply looks pretty sexy tucked away, and no partner, however finicky, could fail to like them. 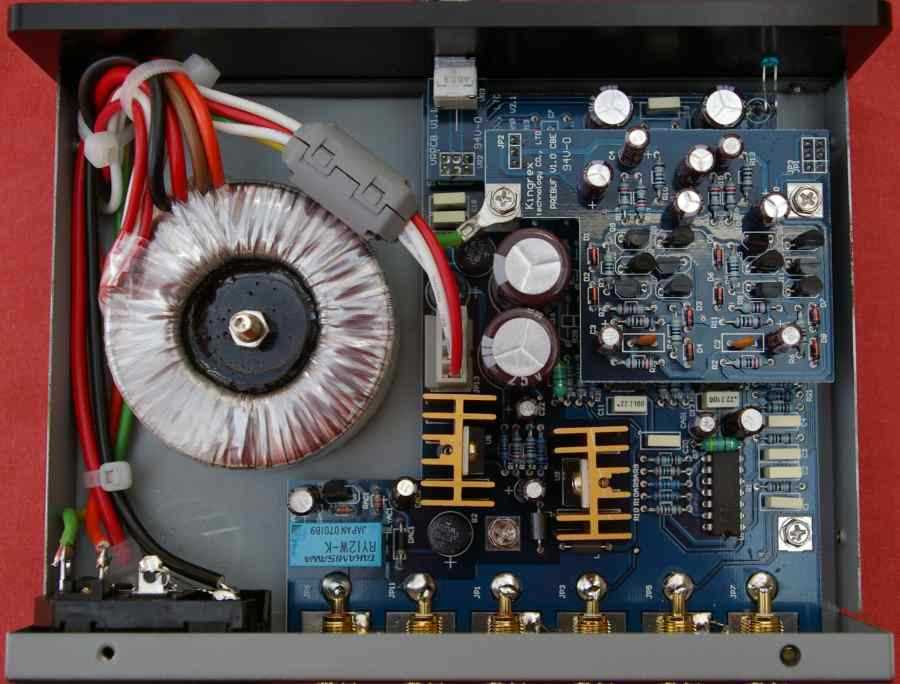 To add to this user-friendliness there is no off-board power-supply, just a standard IEC input to the amps own toroidal transformer with an LM317 regulated output.

The surprise comes in the technology used. As stated above, as the T20 is capable of being driven 'bare' and has it's own volume control, I expected the pre to be simply a passive device with a better volume pot and switching for more inputs. Well in fact it's a sophisticated op-amp based pre-amp, not only that, but rather than the standard switching, the KingRex 'senses' which of the two inputs is in use and automatically switches to that. No doubt there will be sonic benefits claimed for this arrangement, and it does keep the frontplate "clean" but the arrangement does have its disadvantages too, see more on this later. 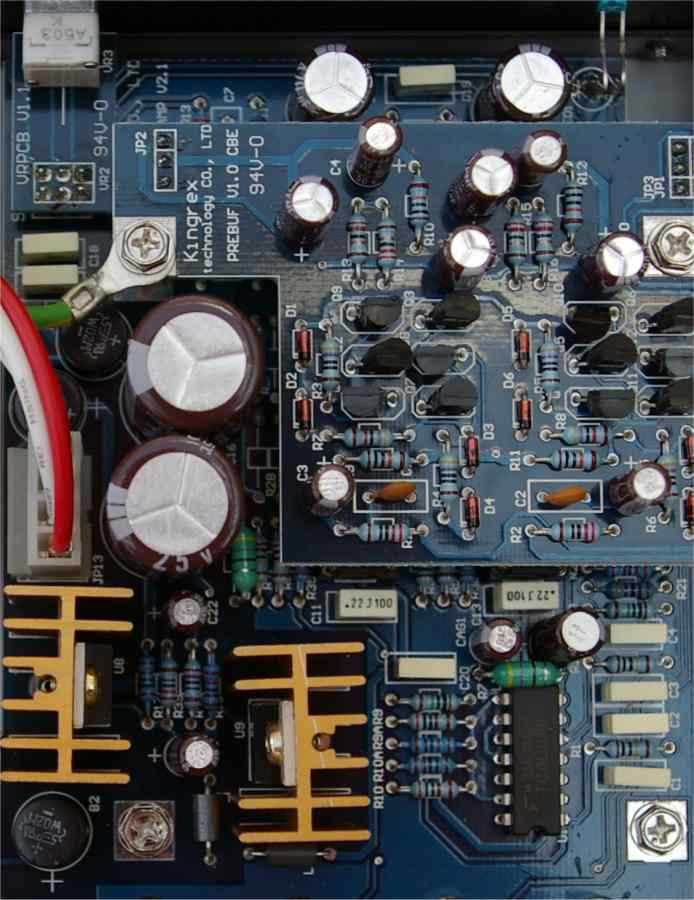 As you'd expect plugging this little baby into the mains and thence to it's matching power-amp was simplicity itself. We're not talking tweeky valve hi-fi here, you couldn't wish for anything easier. Then just pop the phono inputs from whatever sources you are using and switch it all on. Great...

It doesn't run hot so can be tucked away on a bookshelf (along with those gorgeous JB3's) and you have what must be the smallest, neatest true hi-fi system you can buy. All I wish (and yes I have hassled them to do it) is for KingRex to produce a tiny "Micromega Micro" type CD drive.

But there are snags. The first is that vinyl users are in trouble. The problem is that all stages/cartridges etc produce some residual noise. That in turn causes the amp to switch to that input. So there you are listening to some CD, and as the sound fades from one track to silence, at some point you'll get good old fashioned cartridge hiss/hum cutting in. The upshot of this is that either you use only digital sources which are effectively silent, or you switch off whichever component is not in use (tuners will of course need to be muted). This not only defeats the convenience aspect of the automatic switching, but also means that anyone seriously into vinyl will have to put up with a 'cold' phono stage each time they want to play a record. Most such devotees of the black-art leave phono stages permanently on - that's not an option with the KingRex. 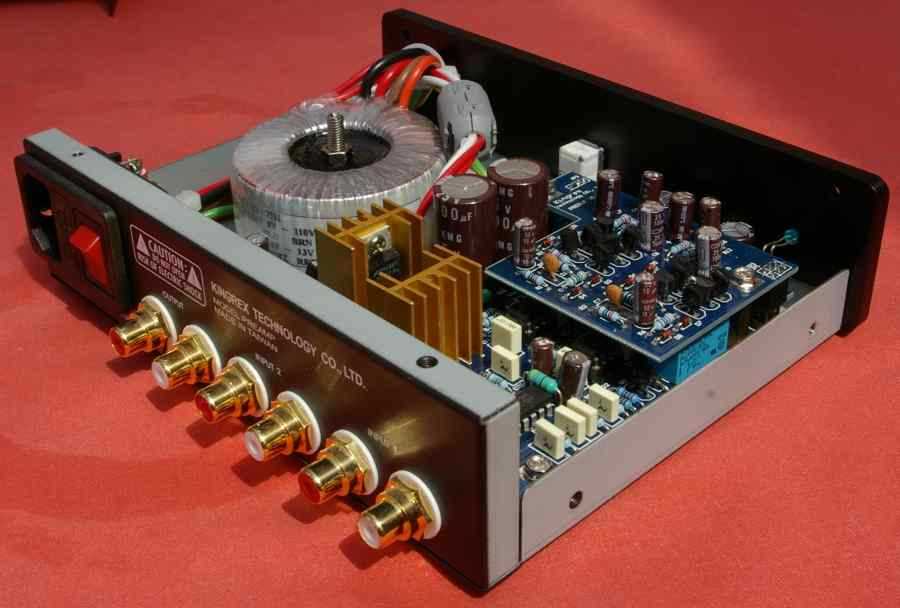 This of course is irrelevant to people coupling the KingRex with its natural partners, CD players, DVD players, Squeezeboxes and Digital radio, but of course here you quickly run into the other snag - the two-input limit.

Again, this too is irrelevent if you are using this little amp combination as a second, or office system, but the single biggest glitch in the whole kit-and-kaboodle is that both in combination with the T20, and in conjunction with other quality power-amps, the KingRex Pre-Amp is so good you will want to use it in your main system in place of all but the very best pre-amps...

When KingRex offered the pre-amp I did warn them that I'd only be giving it a small 'taster' review as what with the T20 and JB3 review I thought I'd covered most of what needed to be said on the KingRex sound. I feared that I'd mostly be repeating my comments on the T20. But here an apology, because in the Pre-Amp they have produced something that allows the T20 to sing in a way it didn't when used solo.

If you look at my comments at the end of the T20 review I concluded:

" It's not harsh, as in grainy and distorted, in fact the top end is noticeably smooth and extended, it's just that it can be forthright without the warmth or weight to balance it out. This is of course very personal and dependent on partnering equipment but a characteristic nevertheless. But with care in partnering the KingRex is, as John has said, a superb budget amp with real hi-fi capabilities, given the price it's also something of a bargain."

Now I've always been a fan of active pre-amps and the KingRex Pre-Amp just showed what a really good pre-amp can do. Gone was that slightly edgy, thin character to be replaced by a body, and power and grace the T20 lacked when compared to the best. It also maintained this stability regardless of volume.

Let me give you an example. Billy Idol's 'White Wedding' is a gorgeous piece of over-the-top pop. His voice has huge dynamics (I actually sing this with a terrible rock band, and no I can't do it) - one minute his voice is rich and deep, the next a rabid howl, a real rock tour-de-force. That contrast, that power, was only hinted at by the basic T20, with the Pre-Amp it just made me want to give up my amateur wailings forever. The bass line that drives the whole song is a bouncy, fruity and contrasts with the splashy percussion effects in a way that gives the track frenetic pace. The difference between the bare T20 and the T20+Pre-Amp was again stark, the former emphasising the percussion to the detriment of the whole. Don't get me wrong, the T20 is a fine amp showing all the strengths of the best T-amp clones - great detail, speed and huge soundstage width that shames most amplifiers, but I have always found them as a breed to be a little on the edgy, compressed side for my personal taste.

No longer, the Pre-Amp could have fooled me into thinking I was listening to a really pricey valve amp (and you know I'm a valve user), maybe not a mega-buck SE, but one of the better PP's and very like a 300b PP I had here a while back that cost 20 times as much.

Reviewing the T20 was just something I had to do, and only really became fun when I put it into the office where previously I'd had no sound system and that seemed its natural environment. In the main system though whilst I could appreciate the T20's strengths, I looked forward to taking it out of circuit so I could get back to my valves. With the Pre-Amp added I often forgot that I was supposed to be testing, something which is very high praise.

So of course now I had to play with the Pre-Amp in place of my own. Pulling out my AudioNote pre, something which cost 20 times + the Pre-Amp and which needs a regular diet of valves was a little nerve wracking and to be honest I put it off for a while. But in the end here's what I found - please note the huge disparity in costs!

1 - As far as residual noise was concerned there was no contest - the AN has some, the Pre-Amp doesn't QED. However driving my own Opera 300PSE amps the power amps tend to swamp both anyway:-)

3 - In direct comparison, the AN is still the pre-amp I fell in love with a few years back. It still gives imaged a tactile feel that leaves the Pre-Amp a little cold. It's hard to pin down what's going on as the AN seduces you with female vocal, shocks you with a rim-shot or can make your heart race. BUT the Pre-Amp is close, too close for all but the most obsessed to justify the expense. It doesn't sound the same, though it's silky delivery and power could fool you into thinking it is a valve amp, and at no time could you fault it, it just sounds a little less like real humans with heartbeats playing real music. I know this is a pathetic cop-out but it's a measure of the huge abilities of that tiny black box that it's even mentioned in the same breath as the AN let alone seen worthy to be put up against it in a head-to-head.

And during this phase of the test, remember that not only was the Pre-Amp now coupled with big bucks 300b SE amps, but also driving my main speakers -Loth-x Loth-x Polaris - and REL sub, a combination that only a madman would drive with a $400 pre-amp. This is a full-range system (down to 16 Hz) and any problems in any area are ruthlessly exposed. The Pre-Amp, even with the T20, drove them beautifully and left me with the feeling that such a ludicrous pairing was actually 100% sonically viable, and more to the point something that I could happily live with - not the case with the T20 on its own in that system.

I hopelessly underestimated the KingRex Pre-Amp. In partnership with the T20 it delivers on the promise made three years ago by the original T-amp, true high-end sound for real-world money. If I were allowed to award a personal 'component of the year' this would probably get it (it's only June after all...). For the money it's almost impossible to fault, in a money-no-object situation it can still make a strong case for itself, not least because of the convenience. But in case you think I'm going soft after all these years it's not perfect (nothing is), and for my own use I'd have it different, so here's the wish-list...

I'd like 3 inputs, one at least of which I would like to be able to switch in and out for vinyl*. I'd also like a bypass on the T-20 so that instead of having to just leave the T-20 volume at maximum, it could have a direct path from the Pre-Amp. And please make that CD drive:-)

*KingRex have just informed me that a new Pre-Amp with 4 inputs and better power supply is due out soon!