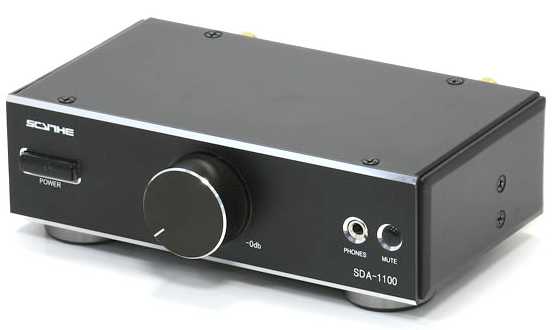 More than one year ago I was discovering and reviewing the Scythe SDA-1000 amp, a very interesting integrated amplifier based on the Yamaha YDA138 Class D chipset. That review caused a stir among budget-conscious audiophiles and that, completely unexpected, rapidly-growing interest made Scythe decide to invest some effort in making the SDA-1000 a better amp. So here it comes, the new SDA-1100, same chipset, same power output, same features and, thankfully, same low price tag!

Don't think at the SDA-1100 as a simple facelift. No, this amp is a completely redesigned device. Clean the blackboard, please, and start again. The PCB is completely new (see pics) and the layout looks much better now. Moreover, the SDA-1100 uses a continuosly adjustable volume pot, whereas the SDA-1000 used a stepped attenuator (which I criticized a little bit). This should make fine adjustments of listening level way easier.
The cabinet is now available in a good full black metal jacket (no silver option as before) while three good looking rubber feet substitute the diminutive discs used on the previous version.
The external switching PSU now accepts IEC standard mains cables, instead of the poor figure-8 which was default with the old PSU. This means you can easily use good (special?) mains cables with the new SDA-1100. The power output of this PSU has remained unchanged (3 A - 12 V).
For other features, technical details and specs please refer to my previous review of the SDA-1000.

You might ask WHY this amp has been completely redesigned few months after the first release hit the market. I was asking myself the same question. Hence, I decided to ask the men in the know, i.e. the guys at Scythe. More precisely, here's what Andreas Bunen, product manager at Scythe, answered:

I know this doesn't answer my questions but there's nothing else we can do, just sit down and listen to the new amp. Perhaps the PCB has been completely redesigned for the SDA-2000 integrated amp (same chipset, more features) so they decided to use the same PCB for both models. Who knows. 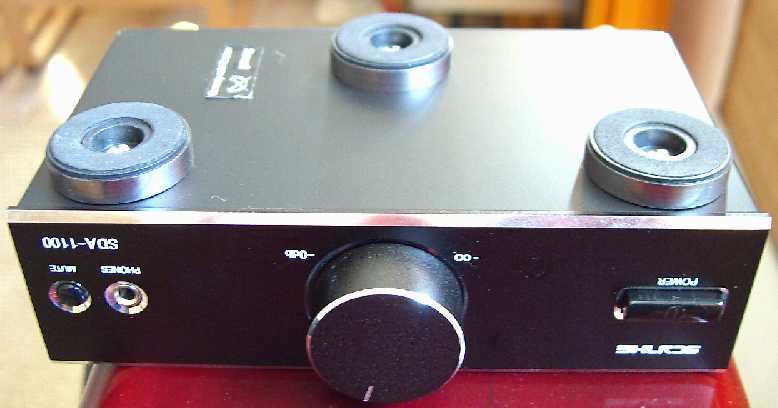 Scythe SDA-1100 - see the new isolating at the bottom 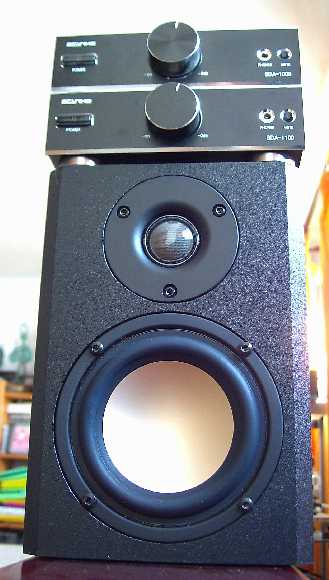 I've extensively tested this amplifier against its natural competitors and, of course, against the original SDA-1000. I've also used the Kro Craft two-way speakers that Scythe sells in bundle (for just 100 €!) with the SDA-1100 (a review is already available here on TNT-Audio). For 60 € you can also find the SDA-2000, with four line level inputs, tone controls and two blue VU-meters! The SDA-2000 has the very same heart of the SDA-1100.

The first thing one notices is that in order to get the same listening level one needs to turn the volume pot clockwise much more. The difference is NOT subtle as it accounts for nearly 45°! Don't be fooled by this feature, though, as the power output is exactly the same, only the position of the volume control changes. Hence, when comparing the two amps avoid thinking the new one sounds lower because of the different position of the volume control! I've seen many audiophiles failing to understand this elementary rule: the position of the volume control has nothing to do with the max power output of an amplifier. Many amps reach their max output close to 12 o'clock. Not so the SDA-1100. If in doubt, crank it up.
The second thing one notices is the slightly different tonal balance, now warmer and softer. No, the amp doesn't sound warm, it is just less bright than before.
The third thing that can be noticed is an increased level of transparency and improved refinement: the sound seems reproduced with some extra care while the aggressiveness of the previous version is almost gone. Furthermore, tiny details are easier to detect now and, overall, it seems the sound is richer in harmonics. This helps with voices, strings and cymbals, which are reproduced in a more audiophile way by this new 1100.
Bass performance is similar: the 1000 has a stronger bass while the 1100 delivers better extension and control.
Summarizing, one can say the new SDA-1100 is a better-balanced performer though it may lack some of the sparkling attitude of the previous model.

With the power output being the same you can't expect differences in this department: 8 watts are still 8 watts. Sorry. Because of the slightly different tonal balance the SDA-1000 sounds more dynamic while the new 1100 appears more relaxed. It is mainly a matter of personal taste: the 1100 is more jazzy while the 1000 feels much more at home with rock. The punch of the bass frequencies appears a bit stronger with the 1000 while, as said, bass extension seems better with the 1100. Don't forget I'm talking of extremely small differences, though.

The virtual image created by the SDA-1100 is slightly larger and deeper than before. The height of the image seems unchanged. Also, a kind of surrounding sound can be experienced with certain recordings. The previous version was a bit more in yer face sounding and the image was more blurred, especially when playing intricated musical programs, with many instruments. Still, the SDA-1100 doesn't reach the level of performance of the Trends TA 10.1 or of the NuForce Icon in this particular area but it is still remarkable considering the price tag.

You can copy and paste all the advices I gave on the previous review. Power output is still the same, so use sensitive speakers to get reasonably high listening levels. When matched to its natural partners, the Scythe Kro Craft speakers (< 85 dB/w/m) I've measured peaks of 89/90 dB at the listening seat, two meters away the line of the loudspeakers. You can't have a party, but it is loud enough to annoy your neighbourhoods.
The continuosly adjustable volume control is a welcomed gift, as it allows extremely precise adjustments. Moreover, since the input sensitivity seems lower you need to turn the volume clockwise more than before to get the same listening level. This might cure a certain attitude of the previous version to distort piano notes when played by a very high-output source.
The new layout might help reducing noise when the amp is used inside a PC cabinet (or so they say) but I haven't tested the amp in this way so I can't comment.
Feel free to experiment with special mains cables, the IEC socket in the PSU will make every test easier and quicker. Not sure this works with any kind of mains distribution but I've noticed a small difference inverting the position of the mains plug into the wall plug. Feel free to experiment and report.

Manufacturing & finish.
With respect to the previous 1000 edition you get better isolation feet, a power supply that can be used with IEC mains cables, a better volume pot and a nice all-black finish. Everything else is similar to the previous release so please refer to the Complaints section of the previous review.
Sound.
I can't understand why the SDA-1100 mutes the output when pushed hard at high listening levels while the 1000 simply enters into clipping mode. More sensitive thermal protection, maybe? I've even tried to exchange PSU's without significative results. While the SDA-1000 clips, the SDA-1100 switches off (temporarily).
The tonal balance is slightly different, the new 1100 being more laid-back and refined, while the 1000 is much more aggressive. While the SDA-1000 could be considered slightly bright, the SDA-1100 is more neutrally balanced.

This new release cures some faults of the previous one and adds a touch of extra refinement and overall balance which are welcomed. Anyway, there's no reason to sell the old version and purchase the new one unless you're on the market for a small, cute and incredibly good sounding amplifier and you don't have any. This is still a truly u n b e l i e v a b l e bargain.