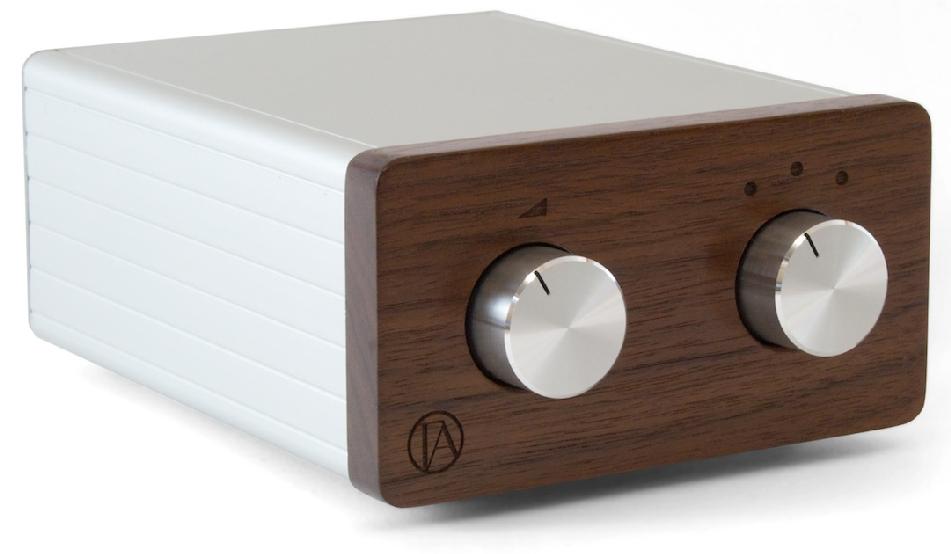 The virtue of transparency

Tisbury Audio describes itself as a “small and passionate company based in London, England.” That seems to just about cover it. They offer a small range of hand-made audio products supplied factory direct, enabling them, they say, to offer top quality electronics at highly competitive prices.

Tisbury also make a headphone amplifier, the Challenge 1 and are promising new products for 2015. But the item under review today is their passive pre-amplifier, the mini-pre.

Most amplification systems are in two stages, although they may be integrated into a single amplifier. The preamplifier controls volume, switches inputs and outputs and may control things like tone and balance. The main amplifier simply recreates the output from the preamp at a higher current and voltage to drive loudspeakers. An active preamplifier adds gain to the signal which can help signal integrity as it passes through filters and may give more volume, or punch to the sound. This extra gain comes at the expense of signal degradation from additional gain stages. A passive preamp by contrast adds no gain – it controls volume entirely by attenuating the level of the signal from the input device. If well-built and well matched, this should give the purest signal but, in my experience, this can be at risk of sucking some of the life out of the music. The Tisbury mini-preamp claims to offer very high quality through choice of components and hand construction.

One issue that can affect the usefulness of passive preamplifiers is mismatching of output impedance to the rest of the system. Tisbury claim an impedance of zero ohms at full volume which should remove or minimise the risk of the “sucked out effect” making this a very versatile device.

The mini-preamp is a small box made of anodised aluminium with a walnut fascia. The front features a volume control and a three way channel selector. The rear has three sets of line level input phono sockets and, somewhat unusually, two outputs. Despite being UK made it looks similar to many mini hi-fi components from the Far East. The quality is higher than many such items however and whilst not having high-end visual pretensions the wooden front is attractively designed and the overall unit is nicely finished. The knobs are decent quality and move smoothly and the socketry is normal gold plated fare.

Although ostensibly a simple device this preamp has a couple of useful features. The overall working range of attenuation can be varied between 0dB, -10dB and -20dB. This will help with system matching. Switches on the base also control whether the second output sends a fixed level signal (e.g. for a loop to a separate headphone amp) or is also attenuated by the volume control.

The volume control uses SMD stepped attenuators. Tisbury say of these: “Our SMD stepped attenuators use a 'series' configuration, similar to the excellent DACT and Goldpoint attenuators. These have a track of resistors connected in series and the volume is varied by moving the output up and down the track. This mimics a standard potentiometer and is ideal for audio. They typically have long life, low operation noise, extremely high sound quality, and fairly consistent impedance throughout their range.” 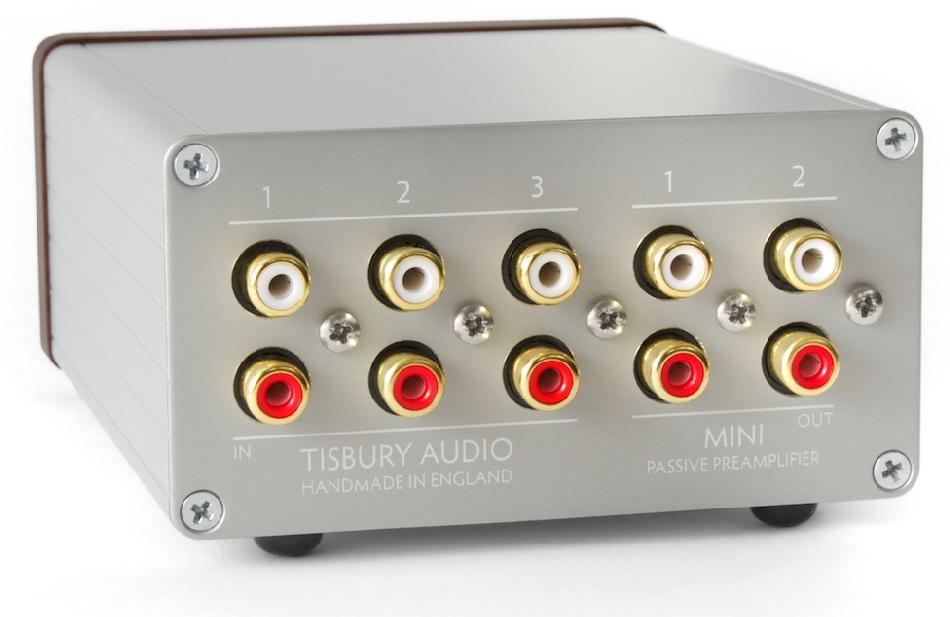 A passive preamp like this is simply a volume control and a switch. As such it can be used classically between sources and a power amplifier. Normally high quality pre-amps are expensive so they are seldom seen outside the high end. But at this price and quality it can also fill a role in a system using one or more small digital switching amps. Cheap, high quality Tripath based amps usually come with one, or maybe two, inputs. This is fine for minimal systems but in most circumstances this can be pretty constraining. By putting a mini-preamp into the circuit it is possible to have more inputs and an output for a headphone amp or subwoofer at reasonable cost and, as we will see, virtually no signal degradation.

This is where it gets tricky. I don't have any high end passive pre-amps against which to compare the Tisbury and my aural memory is nowhere near reliable enough to make the often seen claims “this preamp is better than another which costs $20K”. So I thought about how I might use the preamp in a couple of specific, practical ways and dig out comparisons from there.

I have a custom Gainclone chip amp which uses an integrated passive preamp. That amp allows direct input to the power stage so I was able to switch preamp duties between the Tisbury and the integral passive pre. I set this up to drive a pair of Acoustic Energy AE509 loudspeakers and fed the lot from a PC running Foobar through an Asus Essence STX card for transport.

The sound was simply very good. An 88kHz rendering of Bach's Brandenberg Concertos on period instruments by the Academy of Ancient Music was open, airy and accurate. It gave a first class sound stage with good instrumental separation and timbre. The accuracy really brought out the difference the period instruments make.

I have a soft spot for picked acoustic guitar. I listened to a couple of Kelly Joe Phelps favourites and was again struck by the sweet open treble. Still with the blues I listened to Robben Ford's early album Talk to Your Daughter. His cover of the Yellowjackets' Revelation is one of my favourites. It works spectacularly well with this system. The bass is clear and distinct and the guitar sings out just beautifully (I just wish I could play like that!). For some more vocals I dug out a Neville Brothers Greatest Hits album. This confirmed the impression that the system could handle rhythm very capably as well as delivering vocals in a very natural and comfortable fashion.

There was no trace of the “sucking out” effect I'd feared from putting a passive amp into an alien system. I changed back to the pre amp in the integrated case. That gave quite a different presentation. It was punchier in the bass and seemed faster but did not have the airy treble and relaxed soundstage of the Tisbury.

To finish I incorporated the Tisbury into my usual setup. This involved changing out the Gainclone for a Lym Audio T-Amp. The Lym, kindly left with us after a review, is the phono model which has only one line input and only speaker outputs. Basically it is a very good, simple, low power T-Amp. Adding the Tisbury adds further inputs and, with a suitable adjustment to the dip switches on the base, facilitates a loop out to feed my separate headphone amp. Comparing the sound with the Tisbury in circuit versus a direct connection to the T-Amp there was a slight cut in bass impact but overall it was pretty transparent. It's definitely something to consider to add flexibility to a minimalist system. It's cute too and I was a bit disappointed when the time came to send it back!

There are other reviews that compare the Tisbury favourably to mega-buck pre-amps and, from my time with it, I'd have no reason to doubt that this is comparable to some much more expensive preamps using similar technology. It's a good sound in a well-made and attractive small enclosure and the commercial offer, in terms of price, returns policy and warranty make it a pretty unbeatable offer. Highly recommended.