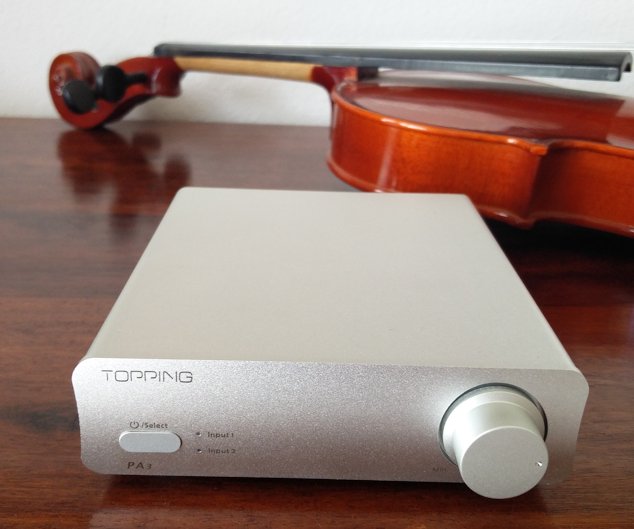 This is the first time we have reviewed a Topping HiFi component, though this Chinese company has been around for a long while. Its products are readily available on many web stores, but now Topping is officially distributed in Italy by AudioAzimuth, and this has made this review way easier. Dealing with local, official distributors solves custom duty troubles and technical problems that may arise during the reviewing process. Moreover, dealing directly with a Chinese company is not always an easy task. Thanks AudioAzimuth for making things easier!

AudioAzimuth has loaned us a Topping MX3 amp/DAC as well, which we have reviewed here. The MX3 uses the very same power amplifier chip as the PA3 I'm going to write about.

The PA3 is a tiny Class D integrated amp, with two line inputs, based on the Texas Instruments TDA7498E chipset. The TDA7498E, powered by the supplied 32V/5.5A PSU, is capable of 70 watts per channel on a 8 ohm load and 80 watts on a 4 ohms load. Impressive, given the size! The official TI datasheet (see the linked PDF) explains that the power output can be even higher, when powering the chipset with a 36V PSU.

Considering the minimal weight of the PA3 - 515 grams, without PSU, which itself is less than 500 grams - this amp has one of the highest power/weight ratio I've ever come across. Saul Marantz's prophecy has finally become reality: in the Seventies he said that the “amplifiers of the future” would have been palm-sized and extremely powerful. And he was damn right.

The Topping PA3, though quite minimalistic, has been carefully designed. The volume pot (sorry, no remote!) is by ALPS, the passive components are not exactly of the run of the mill kind: Nichicon, Omron, Epcos...quite good stuff for a budget amp!
Then you have a smart MCU that protects from overloads, overheating and excessive/insufficient voltage. The nicely finished aluminium cabinet has rounded edges and no screws in the front fascia. The two line inputs can be selected via the power-on switch, a neat feature! The PA3 is available both in silver and black and measures just 17 x 12 x 3.7 cm (WxDxH).
If you need to explore more detailed tech specs, have a look at the official website. 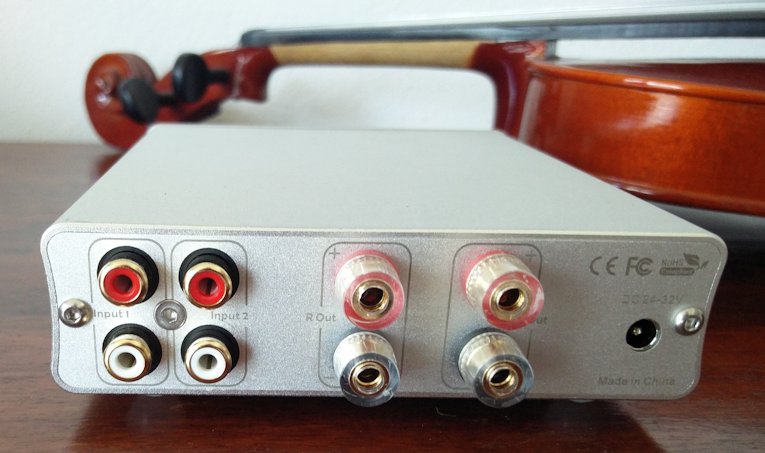 I've tested the PA3 against its brother, the MX3 which uses the very same chipset, with a lower voltage PSU (review will follow soon), and against one of my “reference” inexpensive Class D amps, the old Dayton DTA100a, which was similarly priced, though with a lower power output.

The Topping PA3 is undoubtedly a well engineered and designed component, not just a cheap DIY board placed inside a nice cabinet. Its tonal balance is mostly neutral, just a little bit dry, dare I say analytical.

Voices, for example, are crystal clear, with a prominent presence effect. Male voices appear lighter than they should be, but they still sound natural and smooth. More or less the same thing can be said for guitars and other string instruments. They appear naturally metallic and rich in harmonic content, just a bit on the dry side. Piano and organ notes are precise, with excellent attack and decay time, so much that you wouldn't believe they are being reproduced by such an inexpensive amplifier.

Globally, this amplifier is extremely transparent and precise, like you'd never expect. Even the high range is extremely detailed, though definitely not fatiguing. It is not harsh nor stingy.

More or less, the same behaviour can be found in the mid-bass and bass range: notes are well articulated, precise, and extremely controlled. Depth and power of the bass range are impressive as well, though not as powerful as with the Dayton DTA100, which is somehow less controlled, but a little bit more involving. Yes, it is less precise, but bass slam seems better. The PA3, on the other hand, can control woofer membranes even during the most demanding requirements of the musical program, be it pipe organ pedals or synthetic bass pure tones. In this territory, the Dayton appears a bit more confused and out of control.

Compared head to head, I'd say that the PA3 main virtues are: precision, control and detail. The distortion level is very low. On the other hand, the Dayton appears a little rougher, less refined, more easy going. This helps with bad recordings, that can still sound involving, while the PA3 is definitely less forgiving.

Dynamically, these two amps are still quite different: fast and lively the PA3, a little bit more relaxed the DTA100. There's, of course, a huge difference in terms of power output, a gap that can be detected during highly demanding dynamic variations: while the DTA100 can be found in trouble, from time to time, the PA3 doesn't clip so easily. And don't be fooled by the fact that the power of the PA3 really kicks in once you pass the 12 am position of the volume pot. If that's the case, just fearlessly pump up that volume, and the PA3 will deliver!

When comparing the ability to create a good 3D soundstage, the DTA100 performs slightly better, in terms of size (especially depth) of the virtual stage, while the PA3 is more precise and focused, but geometrically less capable. The depth of the image is affected by the slightly forward character of the Topping amp. On the other hand, the focus of the image and the contours of performers inside the stage are very good, certainly better than one might expect considering the price of this tiny amp. Once again, Tripath-equipped amplifiers are hard to beat in terms of soundstaging.

I'd summarize the differences between the two amps as follows: if you wish a more precise, clean and detailed sound, excellent with good recordings of acoustic music, choose the Topping, as it easily outperforms the Dayton, bar none. If you are a die-hard rock fan, or a trip-hop pinhead like yours truly, who trades precision in favour of emotional involvement, then the Dayton could be a better choice. Certainly it is less refined than the PA3, which is, dare I say it, more HiFi sounding. 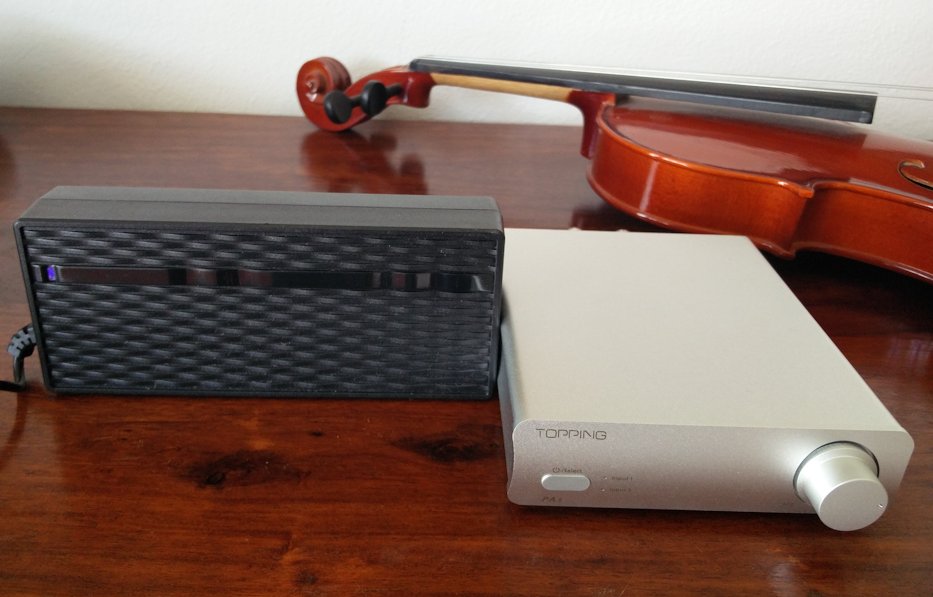 Manufacturing & finish.
This amplifier is really well made, hence it might seem inappropriate to complain about something, considering the asking price. Anyway, sorry, but I can't resist ;-)
A remote control should be mandatory, even at this price. And a bluetooth input. Yes, I know the MX3 does have many different digital inputs, but I'm just asking for a single bluetooth one, not USB/coax/optical etc. Just a plain bluetooth antenna.

The weird combination of input sensitivity and volume potentiometer characteristic forces the listener to crank up the volume above the feared 12 o'clock position. Since many audiophiles believe it is not safe to pass this limit they might complain about an apparent lack of power.

Browsing the web you could find someone complaining about a certain amount of hiss coming from the speakers. My unit was dead silent, just a slight background noise could be detected putting the ears close to the tweeters. This was certainly inaudible from the listening seat.

Finally, there's a warning in the owner's manual about a possible residual electric charge on the cabinet. This is considered normal and not dangerous. The reason for this is due to the built-in electromagnetic interference suppression circuit of the PSU. Actually, this weak current was detectable in my test sample.
Sound.
Being precise, transparent and detailed it might be quite unforgiving with lesser recordings. Moreover, the slam of the bass range and the depth of the stage could have been better.

The PA3 is small and lightweight, hence stiff or heavy cables might flip it upside down. If that's the case, put a weight over it. Allow a couple of days of break-in before judging its sound. Warm-up doesn't seem strictly necessary, though. It sounds quite good right from the start. As for ancillaries, given the high power, it can drive even low sensitivity speakers, just avoid dry and open speakers or sources, or you'll be in trouble.

This Topping PA3 has many virtues and it sounds astonishing for the price. Once, small and inexpensive class D amps had low power and just one single line input. The PA3 offers lots of clean power and two line inputs, more than enough for any aspiring audiophile on a budget. At this price and with its whopping power/price ratio, the Topping PA3 is hard to beat.