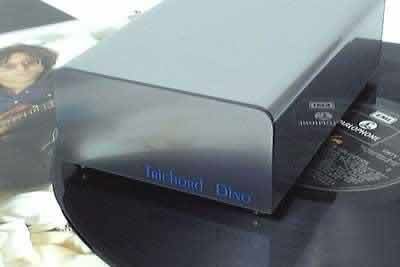 Trichord are the electronics arm of Michell engineering and have been responsible for a range of well received pre and power amps and of course phono stages. The Dino is their attempt to produce a phono stage that will appeal to the mid-market rather than the high-end. From being a deserted market a few years back this price point is beginning to be positively cluttered with stages all after our hard earned cash.

The Dino is a two-box design. The power supply being a small toroid in a plastic box. This provides the raw AC which is regulated in the stage itself. It's ugly so hide it. The Dino proper is prettily cased in a silvered perspex box complete with sexy blue LED. The front is unadorned, the phonos, power supply plug and earth post being round the back. 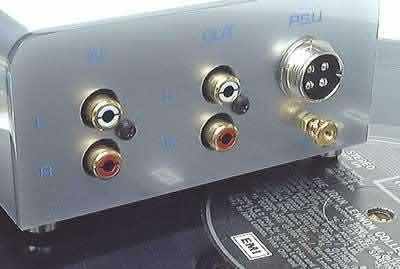 Underneath is the Dino's secret weapon. Two sets of DIP switches give a range of input resistances, capacitance and gain - enough to match all but the weirdest cartridge. This kind of flexibility makes the Dino pretty upgrade proof - start off with a cheapo MM and progress through various MM's and MC's and the Dino will keep pace. A bigger power supply is available as an upgrade so further protecting the beast against obsolescence.

As to the 'Guts' my ignorance of electronics is well documented so forgive me if I hand over to Werner to help me out...

"The Dino is in fact a simplified Delphini, graced by a few later-day upgrades to the circuit. It is a two-stage phonopreamp with passive RIAA equalization between the gain blocks. The front-end comprises an SSM2017 microphone preamp, with variable gain and input impedance (Delphini uses here a different IC biased into class A), the second stage is a FET-opamp compounded with a discrete transistor class A output (The Delphini has a current-feedback output stage). The all-important capacitors in the RIAA filter are MCap polypropylene film and tin foil types, while the Delphini has a combination of these and polystyrene caps. The power supply consists of an external 40VA toroidal transformer, feeding an in-box rectifier with 2200uF smoothing per phase, and then two low-noise voltage regulators built from discrete components, each referenced to a red LED. The upgrade power supply employs a bigger transformer and a first stage of supply regulation with ICs. Owners of an Orca linestage of course can run their Dino (or Delphini) off that one's PSU, which is a cost-effective solution with much sonic benefit."

All of which sounds pretty bloody impressive to me...

One note about this... Here the Dino is being fed a signal from a £6000 front end into £3000 amplification and on to £6000 speakers. So outside the price range of its intended market. However the £100 GramAmp2 had worked well in this set-up so I didn't feel too guilty. The review system will of course pick apart the Dino ranged as it is against a very good all-valve pre-amp.

So with that in mind I bolted up the Music Maker and wired the Dino in - It needs warming up first as it's a bit clanky from cold.

I slapped on Bronski Beat's 'Tell me why' - a favourite of mine for showing speed, a natural (for Jimmy Sommerville) voice and space, particularly all the electronic 'slapping' sounds that swirl at the back of the soundstage. The result was light, open and bubbling with detail, fully exposing the Music Makers natural ability in these areas. The bass was tight and tuneful, 'playing the tune'.

Slipping on 'Take Five' again showed an open detailed sound. Piano was fixed in place with a good harmonic structure. The acoustic bass was nice and dry the drum hits having the required echo from the back wall. Compared to the Audion stage there was a certain lack of weight and warmth but this was a question of balance rather than a fault.

Then I hit a snag... Bolting up the Dynavector DRT-1 and trying the Dino with the Dynavector step-up produced a hopeless missmatch. I can't quite pin down why but the sound varied from hideously distorted to just nasty depending on DIP switch position. This meant that the Dino could only be tested run as a MC preamp rather than as a MM driving an MC via a step-up. I know this sounds bonkers - I mean who is going to buy the Dino then shell out for a step-up on top? But it would have allowed a more direct comparison with the MM only Audion.

So it meant than the Dino stacked up against the Audion+Dynavector (£3000) as an MC stage. Tough...

The result here was a considerable difference between the two set-ups. The Dino again offered an open and clear view of events, the Audion + step-up had considerably more weight and authority. The Dino didn't sound that different with the DRT-1 compared to the Music Maker. Soundstaging was much the same but the ability of the DRT-1 to produce a big acoustic and the signature of an instrument was lessened. The Piano in 'Take Five' sounds like a big complex instrument with the DRT-1, the Dino made it sound a little thin.

Nina Simone's voice on 'My Baby Just Cares For Me' is so 'real' on a really good system, once again the Dino sounded a little thin compared to the reference but the percussion of the piano was well handled and the bass suitably snappy. At the top end the cymbal just had a hint of tizzyness, a characteristic I'd noted before when used with the Music Maker. As this is my 'job' this sent me fault finding and I tried various records with lots of high frequency energy, 'Keb Mo', 'Blue Rondo a la Turk', the Sheffield Labs' King James (stunning) and yes, if provoked I could find just a hint of tizzyness regardless of the cartridge used. Many systems (people) wouldn't notice, but I did, and once spotted it sometimes irritated.

The Dino is a spectacularly flexible stage. It's well built, packed with technology and will remain 'upgrade' capable for a long time. The sound is open and detailed, tight and controlled, what it isn't is a valve stage or a facsimile of one. If you want something with a warm, smooth sound, or a silky top-end look elsewhere and top valve stages have nothing to fear, but at it's price there's little that will handle as wide a range of cartridges with such ability.