Back by popular demand! 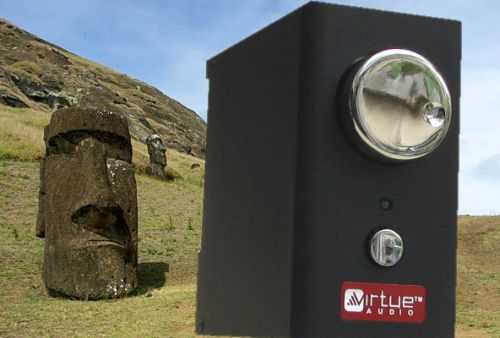 Back in September 2008, TNT was privileged to be the first review site to audition some class-T amps from a new company called Virtue Audio. You can see from my review of the VA ONE and TWO amplifiers that I liked them a lot. In fact over the last couple of years, the TWO has just about replaced my beloved chip amps in my own system. Not surprisingly, the word soon got about that the Virtue amps were something special, particularly at their price, and eventually Virtue Audio completely sold out their first production run. Those who had 'missed the boat' could only look out for second hand examples, or wait for the new Virtue amps to be produced. Early this year, the new models finally came off the production line, and once again, I was very pleased to get a sample for review.

This time round it was intended to produce only a Virtue ONE.2. Externally, the new model looks much like the original, with only a revised rear panel to tell us that it is the MK II version. The speaker terminals have been re-arranged so that the right channel speakers are plugged in to the two speaker terminals on the right, and the left ones on the left. On the original ONE, the right speakers were plugged into the lower pair of terminals, and the left ones on the top pair. The case sleeve has also been slightly altered to make it easier to attach spade terminals to the posts on the right side of the case. The rear panel is now also plastic-coated to reduce the chance of shorting anything while plugging or unplugging the speaker leads. There is also a warning label to remind you that best practice is to turn off the power when you change speaker connections.

It's inside that the real changes have taken place. First off, the pot has been replaced by a stepped attenuator. In operation there are no audible clicks from the attenuator switch but you can feel the steps through your fingers as you change the volume level. Another change is the ability (by moving a jumper) to bring a 90 hz high pass filter into the signal path. This is for when using the subwoofer output so that the 'main' speaker drivers can be 'relieved' of trying to produce the lower (bass) frequencies, thus giving the amp an easier time, and improving the reproduction of the higher frequencies. Virtue have also added a soft-start circuit (required if you want to use a battery or other high current power supply) , slightly lowered the noise floor 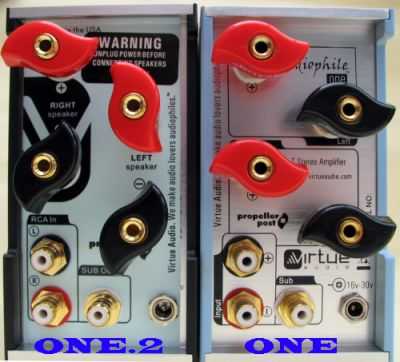 As I usually do for such reviews, I connected the Virtue.ONE.2 up to burn in using a tuner as source, and load resistors instead of speakers. I left the amp running for three or four days continuously with the volume control set to 12 o'clock. The amp never got more than slightly warm in this set up. Then it was time to put the ONE.2 into my main system, replacing the original VA ONE. I had a bit of dilemma in deciding which power supply to use with the ONE.2. The unit comes with a 24v SMPS unit that Virtue recommend replacing with something better. So why supply it in the first place? Well it is all part of Virtue's commitment to help the customer get exactly what they want at the lowest cost. In other words, the 24v SMPS is just to 'get you going' and keep the price of the ONE.2 as low as possible. TheONE.2 sounds quite reasonable with the basic SMPS but considerably better with a 30 volt supply. Virtue recognize that the power supply is a very important factor in how their amp sounds, and accept that customers are probably going toy want to use something of their choosing, whether that be a better SMPS, a linear mains supply, or batteries. In the end I decided to disconnect the Paul Hynes regulated supply that I had been using, and use the 30v SMPS originally supplied by Virtue with the original ONE and TWO amps, and available as an option for the ONE.2.

Having listened to the original ONE for a few hours, I switched to the ONE.2. There was very little change, with the ONE.2 exhibiting slightly greater clarity while retaining all the good points of the ONE. So I had fast punchy bass,good clarity and detail, and a clear and unfatiguing top end. Sound stage was large, deep as well as wide, and the imaging was very clear. There's not much more to say about the sound without repeating what I wrote in the original review. In short, I strongly recommend the Virtue ONE.2 as I did the original ONE. Unfortunately the cost has gone up from 299 to 369 US dollars, partly due to the weakness of the western currencies but also because you now get a stepped attenuator in place of the pot, the soft-start circuit, and the other mods. 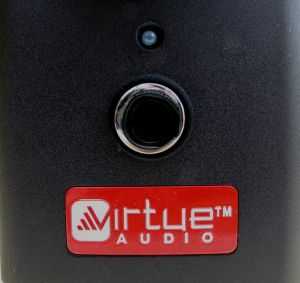 Plugging the Paul Hynes regulated supply into the ONE.2 brought all the same gains that it had with the original ONE and TWO amps. The bass got tighter, detail slightly better, background slightly blacker. It really took the amp to a higher level, and I think that you would have to spend a lot of money to get something significantly better.

While compiling this review, Virtue changed their minds and announced a TWO.2 version of their amp due to popular demand. That will have copper binding posts instead of the gold-plated brass on the ONE.2, and Auricap DC blockers instead of their own-brand Virtuecaps. It also has the larger reservoir capacitor. The price is set at 449 US dollars but as ever, the company have bent over backwards to help their customers by offering a 40 USD reduction if you don't want the Auricaps (ie you want to use your own choice of caps). Given that these DC blocking caps are an important factor in how the amps sound, this is a very welcome option. The TWO.2 should be available some time in May (2010).

In my opinion, these 2050 chipped class-T amps sound significantly better than the 12 volt varieties, and allow us to drive a much wider range of speakers. Perhaps unsurprisingly, the 2050 chip has become very popular with DIYers in much the same way that the LM3875/LM3886 chips did with the chip amp builders but you won't find many DIYers with the ability to produce something as classy as the ONE.2. Even considering the price increase over the original ONE, I still feel that the ONE.2 is well-worth the asking price, given the quality of the product-build, and the sound quality that it produces. So yes, this product gets a very strong recommendation from me!