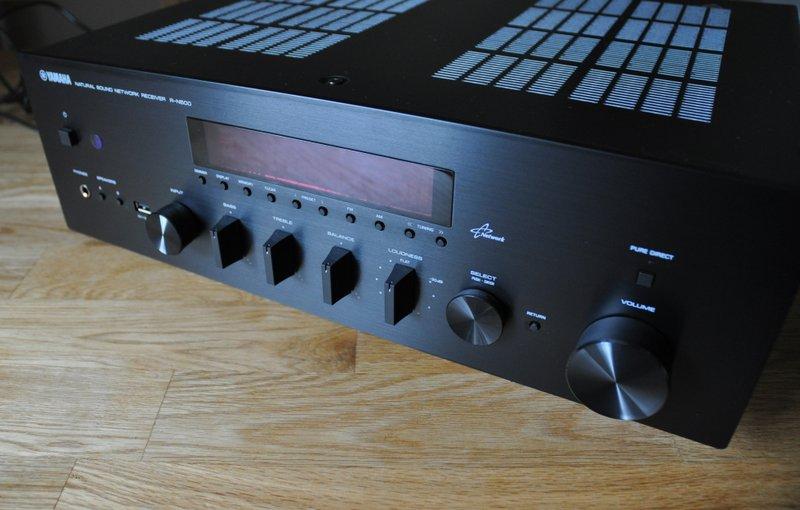 Retro is very much of the moment, it seems, and I kind of like it. A modern Mini or Fiat 500 will never have the appeal of the original, but it will have the convenience and safety of a modern car, with the looks of a style icon. The best of both worlds, if you look at it in a positive way. Audio isn't immune to this fashion, just have a look at this Yamaha receiver. It looks like it has come in straight from the seventies, but it's actually very much of the moment. Yes, it is a stereo FM receiver, but it is a network player too.

I honestly can't remember the last time I encountered a proper stereo receiver. When I was young it was the thing to have: a handy combination of an FM tuner and a stereo integrated amplifier in a single box. And that's just what the Yamaha R-N500 is, actually, amongst other things. Yes, it really contains a stereo AM and FM tuner for old fashioned analogue radio. It also contains a phono stage, tone and balance controls and even a 'loudness' control! The A-B speaker switch and headphone output aren't missing either. This would all have been completely normal in the seventies, but 40 years later it's not really the norm anymore. Even the looks are straight from the past. Just in case you think I'm overreacting: when was the last time you saw a captive mains lead on a component?

So, the Yamaha looks and feels a bit like a dinosaur, but luckily it also contains a DAC and a network connection. It features Apple Airplay as well and even more forward thinking is the inclusion of Spotify Connect functionality, of which more later. It can play files too, not just from a NAS but also from a memory stick inserted into the USB connector at the front. Digital input includes optical, coaxial and USB, so it is difficult to see how you could fail to play your digital music on the Yamaha. For analogue replay there are line level and phono MM inputs, and a subwoofer output.

Hanging of the end of all of that functionality is a nominally 80 watts stereo integrated amplifier, making this one of the more inclusive and contemporary all-in-one solutions of the moment. And it won't look out of place next to your turntable and vinyl collection!

There's a lot to try here, and it all seems to work just fine too. I didn't have any problems at all. The included remote is a bit plasticy, but it works and at this price level you cannot expect slabs of aluminium. The display is very good and easy to read. Airplay, Spotify Connect, file replay from usb stick, digital and analogue input, it all simply works. Hook it up, press play and you're off. Again, just like in the seventies.

The player can be controlled by an app, which also controls file replay. I used the iPad, and that worked well, but I have to admit it is all a bit rudimentary. The OPPO app is better, and even that one is not as good as I'd wish.

The really interesting feature, for me, is Spotify Connect. This means that you can use Spotify on any device, your phone, tablet, PC, Mac etc. and select the Yamaha as the device to play the music. This does not mean that the music is then sent from your tablet or phone to the Yamaha. Your tablet only runs the user interface, enabling you to select the music. It then contacts the Yamaha and tells it what to play and the Yamaha then gets the music, directly over its network connection. This means that all sound processing happens inside of the Yamaha without it having to adjust to an external clock or depending on a separate connection to send the music from the tablet to the Yamaha. In theory this is a far more flexible and superior solution than using airplay, for example. 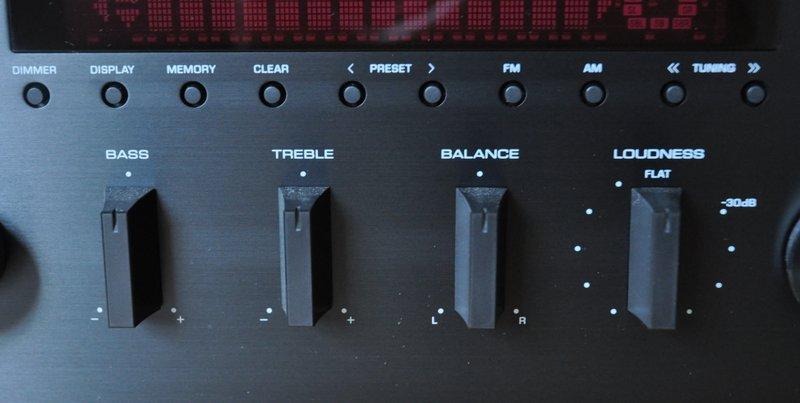 What do I expect from a Swiss army knife of a component that includes a relatively powerful amplifier and costs less than half what my OPPO Blu-ray player costs? Not much, to be honest, but I was soon proven wrong. I still had the Magneplanar M1.7 speakers around when the Yamaha arrived and I couldn't resist trying it with these. I didn't really expect it to do well, but I was very pleasantly surprised from the very first track. This thing is actually not bad! Not bad at all!
OK, the Hypex NC-400 modules did a better job, but the difference was much less that I had ever dared to think. The Yamaha is a bit softer in the bass, somewhat less detailed in the midrange and less sophisticated in the top-end, but that's not to say that it sounded bad. Soon I was actually enjoying it!

Airplay from my iPad sounded very well indeed, and when I switched to Spotify Connect the sound quality went up a little bit. Digital input from the OPPO worked very well, as did the analogue input, to be honest. The tone and loudness control can be bypassed, and this does improve the sound enough to be worth it. Just switch the tone controls back on for background listening, and off again for serious listening at higher levels and you'll be fine. It's nice to have the option of tone controls, and sometimes even nicer to be able to switch them off.

At this price level, and with this feature set, there will always be an element of compromise where the sound is concerned, but in this case the overall result is actually very good with no real weak points. If this receiver can sound pretty much OK driving relatively difficult and revealing speakers like the M1.7 then there cannot be much wrong with it. Whatever is lacking only becomes clear in a direct comparison with a better amplifier or source, but listened to on its own the Yamaha is perfectly satisfying. It has enough weight and drive to rock and is refined and subtle enough for jazz and classical.

I suspect that for most people, myself included, this receiver would actually be all they would ever need, even in terms of sound quality. Obviously, if you're going to spend 2k or more on a pair of speakers then you'd want to spend a bit more on source and amplification than this Yamaha, but for most real world speakers this receiver would actually do quite well. It will certainly be able to drive them.

Do we dare to use the word bargain here? At this price level I think it is justified. The feature set is a bit strange, being a mixture of retro and contemporary, but there's very little missing. For many people the Airplay function will be extremely handy, I suspect, but if you happen to be into both Spotify and vinyl then this machine is made for you. And if you are into anything else than surround sound, it still is all you'd ever need. Even just as a network player this is outstanding value.
The sound quality was the biggest surprise. It might not be high-end, but it's not very far off. Throw in the retro look and the tone, balance and loudness controls and I don't think you can go wrong with this. Well done Yamaha.