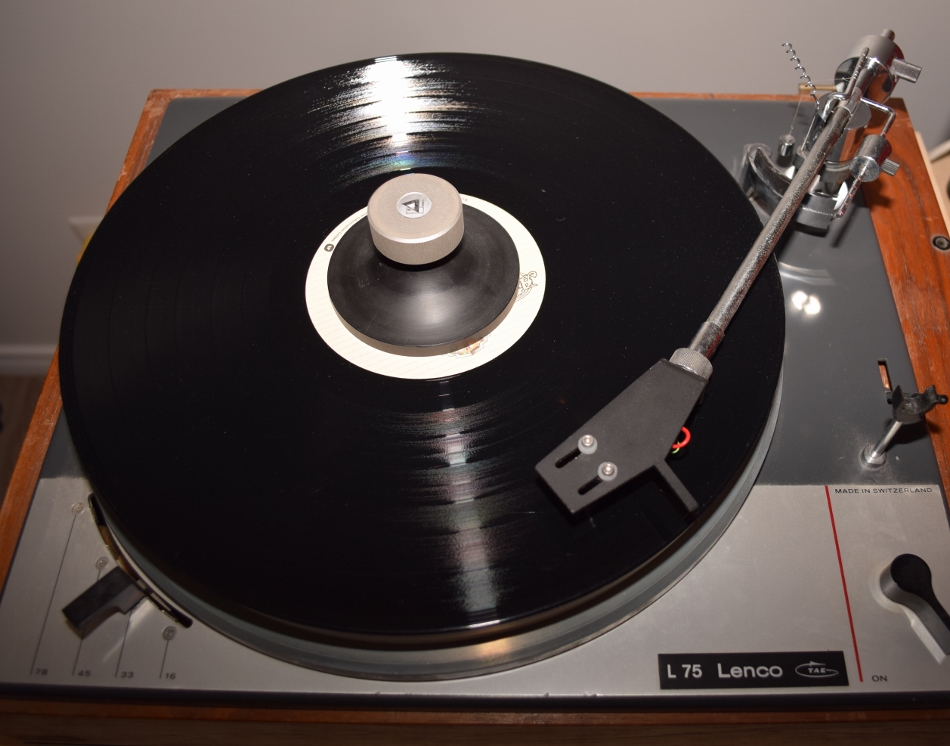 A vintage idler drive Lenco in good condition, cleaned and adjusted, with no modifications other than to the tonearm, sounds better than any new $1000 turntable on the market. Put on a used RB300 series tonearm or a Jelco (this writer has done both) and the result will outperform some turntables at more than twice that price tag. A lot of people have criticized the original Lenco L75 / L78 tonearms. They are generally considered to be not worth keeping on the original turntable and should be the first thing to go if the budget permits. Well, they are right, a 50-year-old Lenco tonearm typically has some major issues. However, that being said, there are some fixes for these issues and a repaired Lenco arm can be a great temporary solution for those who want to put into service an old Lenco without spending a lot of money on a replacement tonearm. The most important issues or deficiencies of the vintage Lenco tonearms are with the headshell, the pivot V bocks and the counterweight shaft connection.

This is the Part 1 of what is intended to be a two part series. Part 2 will discuss some additional Lenco arm tweaks yet to be tested, and relies heavily on the very extensive expertise of Pierre Lurné who has recently joined the TNT-Audio team. Pierre has a lifetime of turntable and arm design experience and has provided some interesting comments about the Lenco arm.

There have been several versions of the L75/78 headshell over the years however they are very similar and have the same weaknesses. They are made of a light gauge metal soft enough to bend with your fingers. I know because I bent one this morning. In the post RB300 era (launched in 1983) such a design would generally be considered totally unacceptable. Over the many years since their production, corrosion and wear issues with the headshell wiring and connectors typically becomes a problem. Another big irritation is the cartridge mounting arrangement. This bizarre design would take way too many words to adequately critique so please refer to the photos below.

Lenco used a non-standard connector between the headshell and the wand so any after-market headshell using a standard (a.k.a. SME) connector won't work. Happily, there is now available an excellent replacement for the original headshell. It can be easily found on Ebay, just punch in “Lenco Headshell” in the Ebay search box and it should appear near the top of the list. It is a bit expensive but still way cheaper than a new tonearm. It comes with jumper wires and a collection of shims to aid in matching with various cartridges. The jumper wires are not the best quality but they do the job. Of course, many sources for better quality jumper wires at various price points can be found on the Web. This headshell has been running on one of my Lenco's for over a year and is performing very well. It's quite rigid, cartridge mounting and alignment is easy and solid, and the contacts to the arm tube are very good. Installing this headshell actually solved a hum issues that was present on one of my turntables. 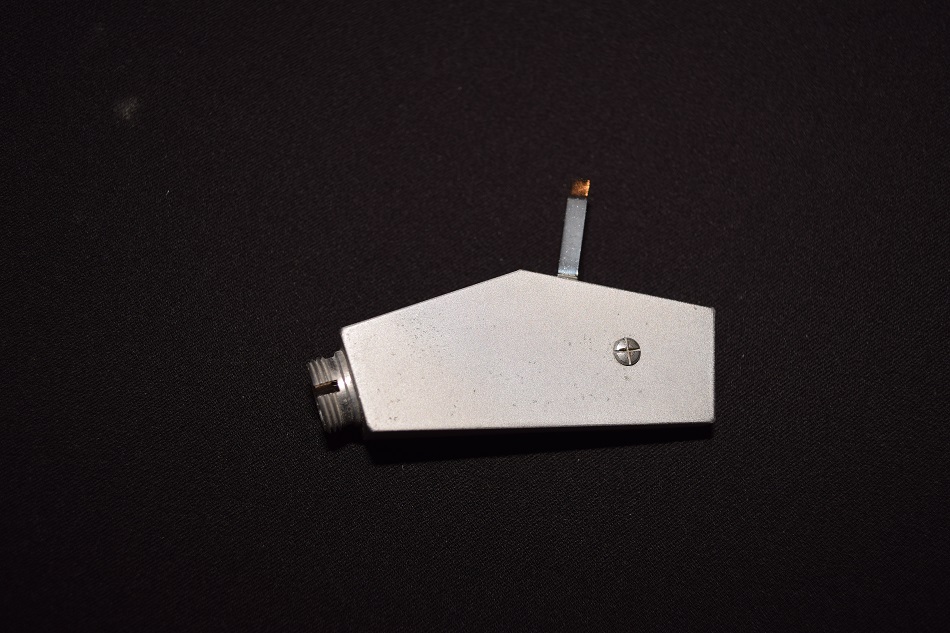 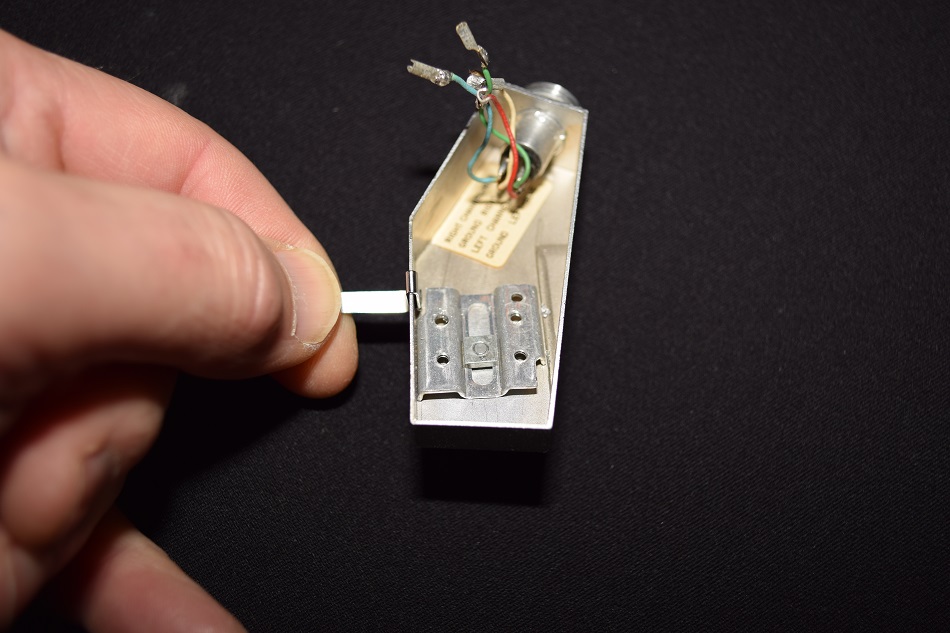 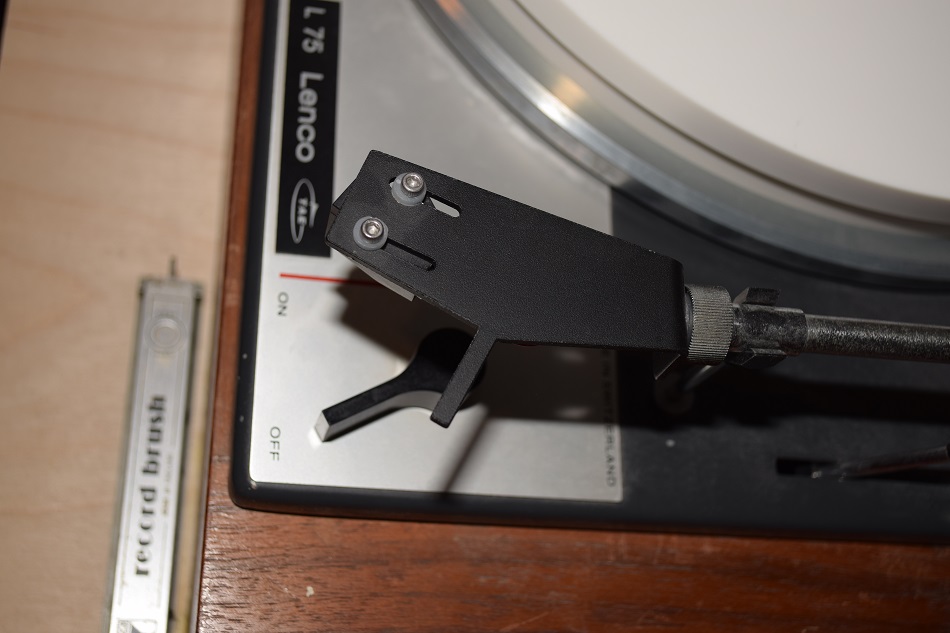 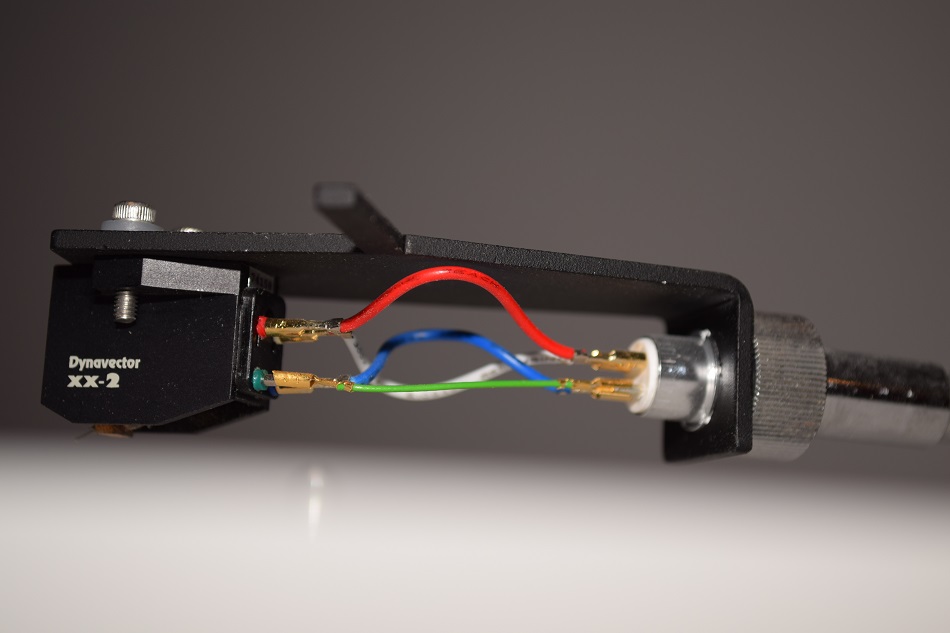 The Lenco arm wand pivots on two V blocks that are made out of some kind of soft rubber. Most of the many Lencos that I have purchased over the years had worn out V blocks. Replacement is reasonably simple for most DIYers and there are a few sources for V blocks to be found on the Web. They can be expensive but still a lot less than a new tonearm. They have appeared in Teflon, hard rubber, plastic, brass, and probably a few other materials. Again, Ebay is a quick way to find some. Some versions made on 3D printers have become available. Of course, there is also the ultimate DIY solution; cut to size 2 pieces of aluminum from a beer can, bend and glue on top of the worn-out V-blocks. Having tried this, it does work, however it is difficult to cut and install the metal V perfectly in order for the arm wand pivots to seat snugly and level. Many people will tell you that the Lenco V-block design was not a very good performer even when new and therefore the arm should be replaced. Certainly, when compared to modern designs this is true, but replacing these blocks with aftermarket offerings of harder materials is still an option worth consideration for those who don't wish to spend $500 to $1000 on a replacement arm. 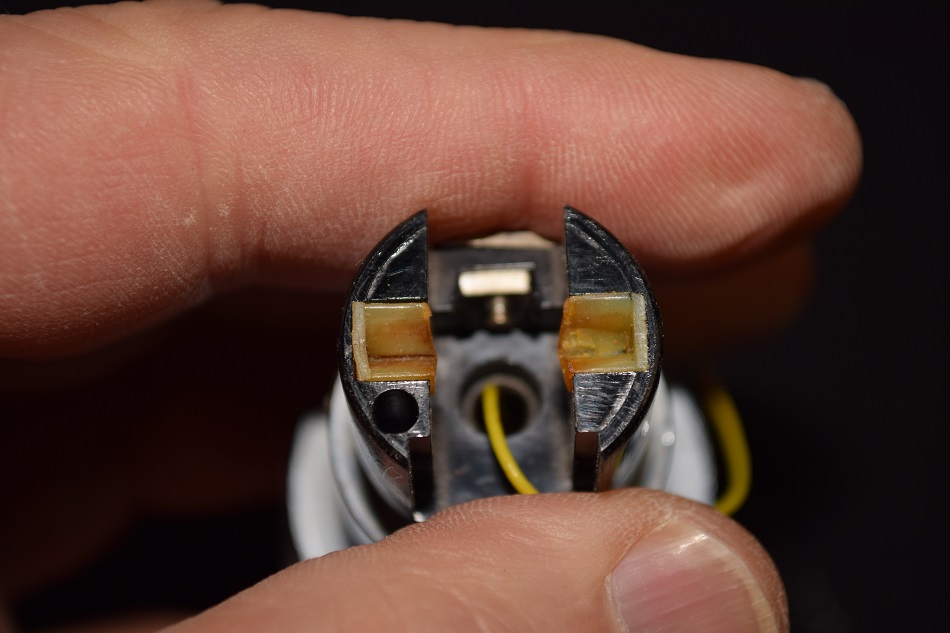 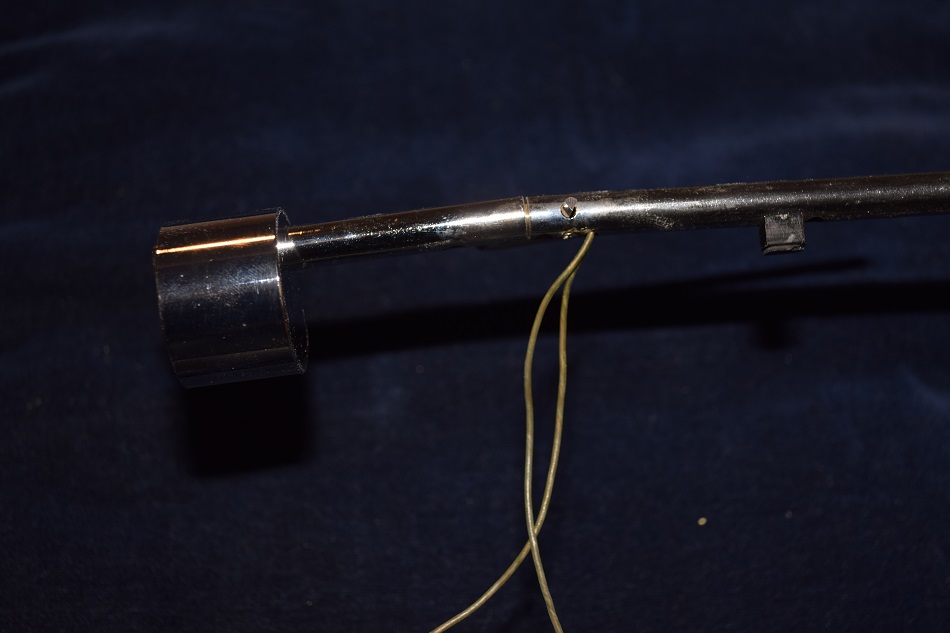 The easiest solution is to simply weld the 2 parts together using liquid metal and a short piece of metal rod. It looks ugly but it does the job. Note that in the photos below, the metal pin that is welded to the shaft turned out to be slightly too big to fit in to the cap that holds the arm wand in place. Not every DIY idea works on the first try! Make sure you do a test fit to ensure that everything will go back together before welding something to the arm wand. Others have had success with simply gluing the parts together with epoxy. These solutions of course defeat the original design strategy but, in any case, a floppy counterweight is probably worse than no decoupling. It also looks silly. What will your buddies think? Considering that the purpose of the whole exercise is to have a low budget fix for an obsolete tonearm, this compromise is reasonable. For those interested in further researching this idea, Pierre Lurné, expressed some very interesting thoughts on the topic of vibration decoupling in an article that appeared in Stereophile magazine in 1987 and republished in 2010. In this article he specifically expressed a preference for a non-decoupled counterweight. You will have to look for it as I have not obtained permission to reprint it here. 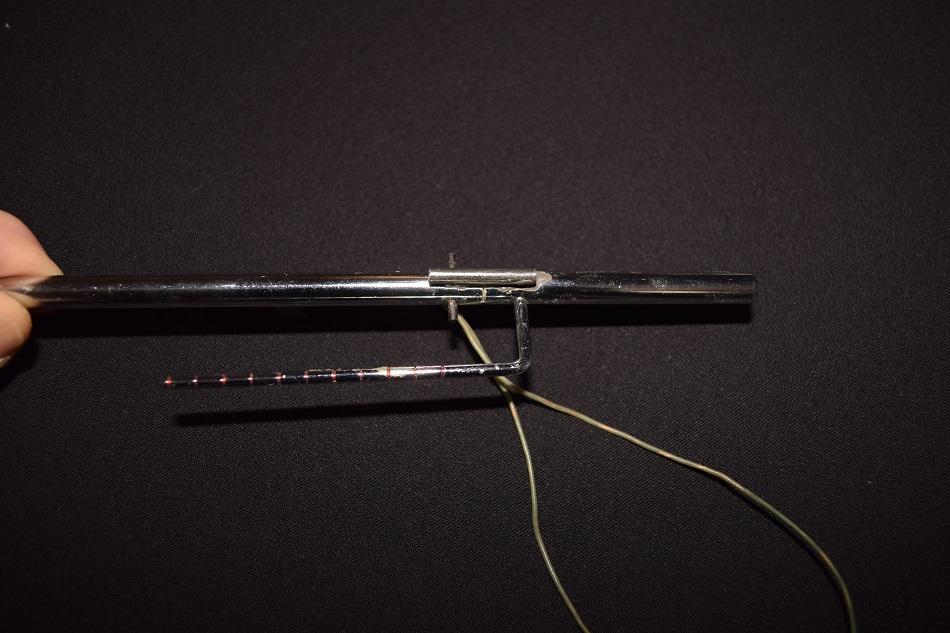 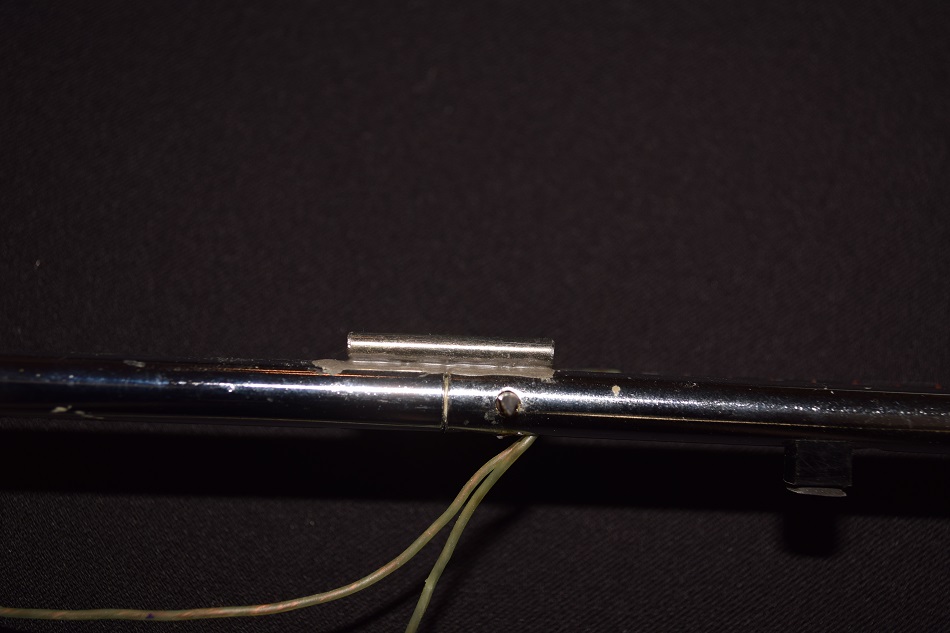 One popular fix for this problem is to wind some thread or fishing line in the joint between the arm wand and the counterweight shaft. This will spread apart the two parts and take up some of the looseness. This solution works however over the long term the line tends to work its way out of the joint and one has to start over. One solution for this is to glue the line in the joint and then wrap it with metal tape. Of course, the counterweight is then no longer on a decoupled shaft. 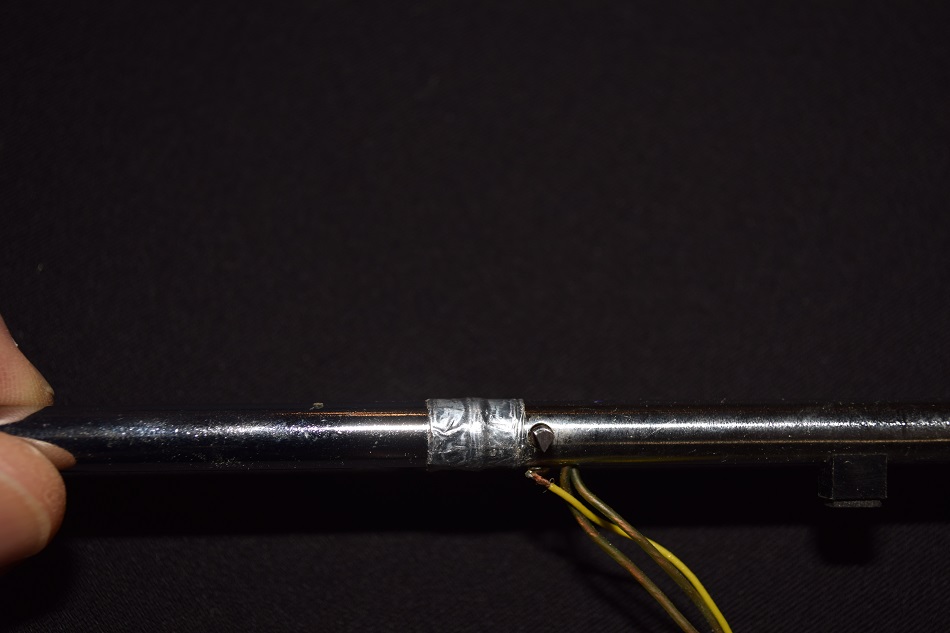 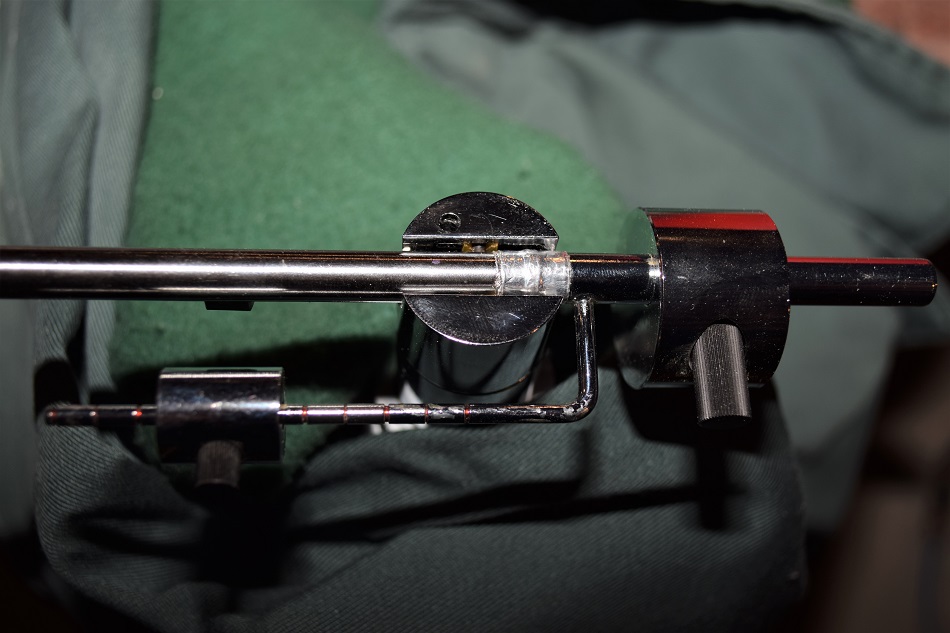 My system presently includes 2 Lenco idler drive turntables, one of which is close to original. The original plinth has been glued and screwed into 1.5 inches thick of Baltic Birch plywood. It uses an original Lenco tonearm with an Dynavector DV XX2MKII cartridge mounted in a new headshell. It has the new V-blocks and the fishing line and metal tape repair has been implemented. Some leftover plywood, V-blocks and a new headshell for a sound that can embarrass some much more expensive turntables!

So, there you have it. Get your Lenco arm back in the game in 3 easy steps. Enjoy.