The X-Cables (It's out there)

Since I have written the last two Interconnect Articles I had both some feedback from you, the Readers and have made a few more Cables myself. All but one Cable where versions of the XLO Geometry, which I have decided to call X-Cable (due to the crossing conductors making many, many X's down the length of the Cable).

I have now setteled down to two basic Versions of this Cable. They are called X-1.5 and X-3. The number denotes the distance between the begin and end of one complete turn around the core.

So the X-1.5 has one complete turn (or twist) every 1.5 cm. An X-1.5 Cable is shown below. I'm measuring the Cables Capacitance. The black blob on the left-hand side of the Cable is a Anti-RFI Ferrite. 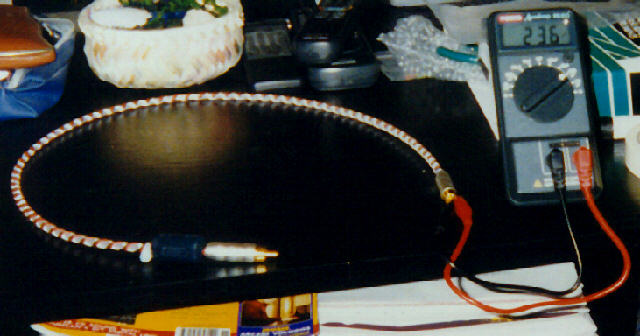 The X-1.5 Cable has about 200pF Capacitance per meter and a loop-resistance of about 0.2 Ohm per Meter. The Inductance is fairly low, about 1uH for a 1m Cable, though I cannot measure inductances this low.

The X-1.5 Cable uses about 1.5-1.6m Wirewrap Wire for each of the 12 individual conductors. I personally find this Cable to be very natural sounding, with a fine tonal balance and excellent imaging and soundstaging.

But the price is a rather large Capacitance. This may just not do for really long Cables (like the 5m I will need in the Future for the link from my Pre to my Mono-block Amp's (under development). In cases like this the X-3.0 is the better Cable. Here a complete Turn (or twist) is persent only every three centimeters, roughly halving the contact-area between the two separate conductors and halving the Capacitance of the Cable to 100pF/m. It also uses only 1.2-1.3m Cable for each individual conductor and hence has a lower Resistance. 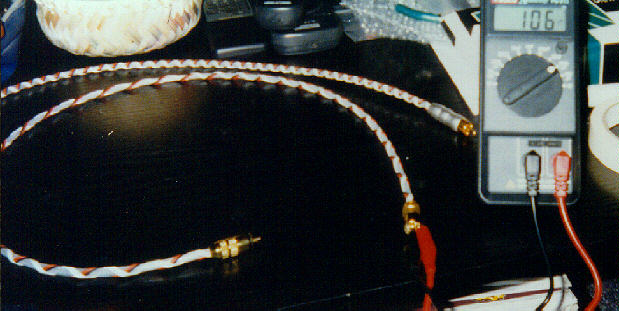 The UBYTE-I Cable - a large Byte?

Inspired by Joe Skubinski's "Superconductor" Cable I tried recently something similar. As it uses the same base-cable as my UBYTE Speaker-Cable (the UBYTE Moinker was coined by Pat from Analog Research and stands for "Usually Beats Your Terrible Engineering) I decided to name this Cable UBYTE-I Cable (UBYTE- Interconnect Cable).

I used the complete "Low-Loss Satellite" Cable which normally gives me just the Air-spaced Core. This has a 18-Gauge solid copper Center Conductor, a solid Copper-foil shield over which there is a copper-braid and a PVC-Sheath.

I remove both the PVC Sheath (yuck) and the Copper Braid. The PVC is just plain bad and the Copper-Braid makes for a multi-stranded conductor, no way I let that in the Signal-path.

So all we are left with is the Solid Center-Conductor, the air-spaced polyethylene inner insulator and the outer solid copper-foil. The Cable is now re-jacketed in Polyolefin (or better Kynar) Heatshrink (don't forget to shrink the heatshrink...) and simply terminated in decent Phono-plugs.

The Plugs from Maplin which I recommend in the resource-guide are well suited to work with this Cable. Making a Pair of these Cables takes about 20minutes. The material cost (including Plug's) for a 1 Meter Pair is approximatly 16 UK Pound/ 26 US Dollar (if polyolefin heatshrink is used).

The UBYTE-I Cable is not half-bad. The Capacitance (65pF/m), Resistance ( 0.04 Ohm/m) and Inductance (0.4uH/m) are all very low, making this Cable technically very close to the "ideal cable". The base-cable is rated up to 1000Mhz, so this Cable should be good for that much as well.

It would probably also make an excellent digital interconnect, but as you may know, I feel that the S/PDIF interface is so unacceptable that all possible benefits of an external DAC are negated when using it.

As for the subjective sound of the UBYTE-I Cable, it looses a little transparency against the X-1.5 and the X-3.0.

However non of the other Cables (including some rather pricey commercial stuff) I had around came close to matching it. Considering the much reduced amount of work (when compared to the X-Cables) and the excellent Performance of this Cable, I have no reservation recommending it for all but the most demanding applications.

I found that the slight lack of transparency benefits the use of the Cable with CD-Players. Between my CD-Player and the Preamp, some of the CD's recorded very "edgy" where smoothed out just enough to be more listenable without any notable loss of information. When used as Interconnect between the Preamp and the Poweramp while playing Analogue Records the UBYTE-I fares less well. Here the slight loss in Soundstage width and depth as well as some loss of fine inner detail becomes aparent. Still a cracking performance, which again proves, Cable are Science (mostly at least) and not magic...

I have loaned this Cable to my Boss here at work, together with an X-3.0. He has got an all CD-System with an Audiolab Integrated Amp, Arcam CD-Player and Heybrook Speakers.

I got the X-3.0 back while he decided to pay me for the UBYTE-I (no I'm not telling you how much I charged :-P ). If that is no recommendation, I don't know what is.

More hints from inside the Cable Kitchen

To make the X-Cables I nowadays mark up the Core in 1.5 cm (or 3.0cm) distances with a pencil so I can get the marks off easily. This gives you some Idea of what the spacing should be and makes sure that your Cable has a consistency that matches any commercial product.

Having been recently shown some Cables made up after my recipe, I noted that I have not stressed enough how important it is to pull each strand TIGHT after about every ten turns enough. While the performance of this Cable will not suffer much if you leave too much slack in the Cable, it does not look particulary good.

Now this Guy was however able to improve on my Cable on the termination front.

The Phono-Plugs I'm using now do not sound as good (very very small difference though) as the cheaper units I used to use. But for that slight drop in performance you get a Strain-relief and the Plugs are much easier to solder on the ground-side. They also look a lot better (important if you charge for Cables ;-) ). Now I have allways clamped the Strain-relief directly on the Cable. Kynar is tough enough to dig it.

Well this Guy decided to wrap the point where he clamped the strain-relief down in PTFE-(Plumbers)Tape. Very clever. I was not so happy about the small amount he used, but briliant Idea. So buy some of the Mummy-wrap (PTFE-Tape) and put some serious amount down on the point where you are going to clamp the strain-relief down. It does improve the sound enough to put the plug broadly in line with the one I used before....

Some people have had problems finding the Low-Loss Satellite Cable I recommend. I have decided to provide a complete set of resources for buying Cable-Parts in another Article. But if you can find any type of Cable using an Air-spaced inner insulator of about 5mm Diameter you can use it. If has any stranded/braided shield (in case of it being used for the Linear Pair) remove the stuff as well as the (usually PVC) sleeving.

Some have found it problematic to strip the center-conductor out of Cable which was different from the stuff I recommended. Until recently I felt justified being smug about it, after all they where using the wrong cable!

Well I eat crow here. Comming back from Maplin with more of the Cable to make a few more X-1.5 Cables I noticed that this Cable looked different from the Stuff I had before. And sure as it is, the center-conductor was almost impossible to strip out.

Here is how I did it. I clamped the conductor into a small vice and started rotating the Insulation around the conductor. This eventually breaks the bond between conductor and insulator and thus allows the Conductor to be stripped out. If you feel this is too much work, leave the connector in and connect it to ground at only one end.

If you want a Balanced Interconnect, you can use the Center-Conductor as Ground-Connection. Of course the Cable is much more flexible with the Center-conductor removed....

Another one was "How do I strip the @&^%$£ Kynar-insulation of without cutting the Conductor?

Well I tell you how I do it. It's not very hygienical (don't tell people that actually buy those Cables yeah?) but the only reliable stripper I have found are my teeth. So if anyone know's of a cable-stripper that strips kynar of teflon reliable, drop me a line....