Over The Top Speakers 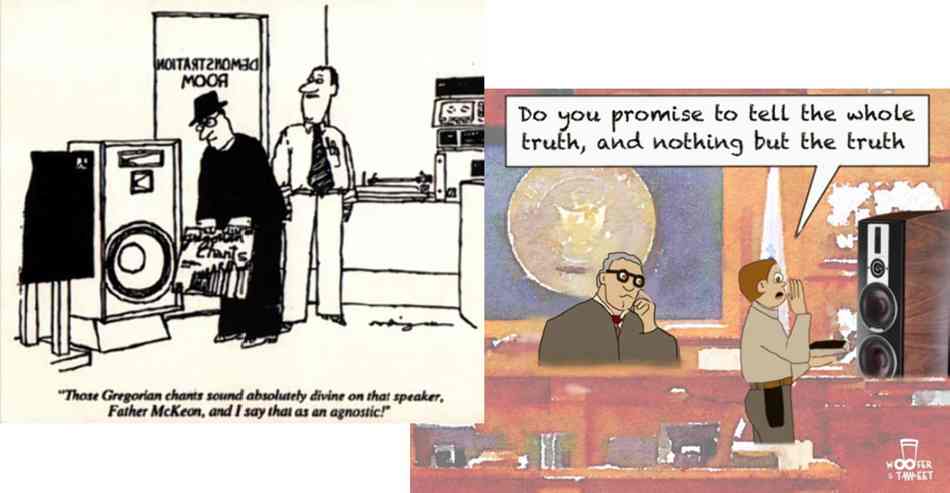 This build came about in part from a desire to use some speakers I had just acquired and also, in part, to see how far I could “push the envelope” in making a somewhat unusual yet effective speaker system. I need to point out that there is very little new in cabinet design - The Onkens, the name comes from a Japanese designer who took the original Jensen Ultraflex design and modified it. Then came Jean Hiraga who applied audiophile thinking (sideways and reverse logic) and built his “Petit Onken” which I copied in a very successful build using Altec 604-H drivers. Plus I tried to make them less monolithic in looks.

Peter L Jensen and Edwin Pridham in 1915 developed the first speaker as we know it, the Magnavox. In 1927 he started Jensen Radio Manufacturing Company. HERE is a link to the original plans for the Ultraflex and HERE and HERE are links to an informative Russian website. Going sideways a bit, William E Haskell developed a method of lowering the bass pitch in organ pipes by a method surprisingly similar to the basic Ultraflex design HERE. I'm not really suggesting this was part of Jensen's thinking, but to me it is an interesting coincidence.

A gentleman called Joseph Hofmann came up with his IRON LAW which states that, in essence, you need a large cabinet for low bass if sensitivity is also required. Hofmann was the “H” in KLH speakers. Irrevelant to this but again interesting is the quote attributed to Carrol Shelby: “There ain't no substitute for cubic inches!” 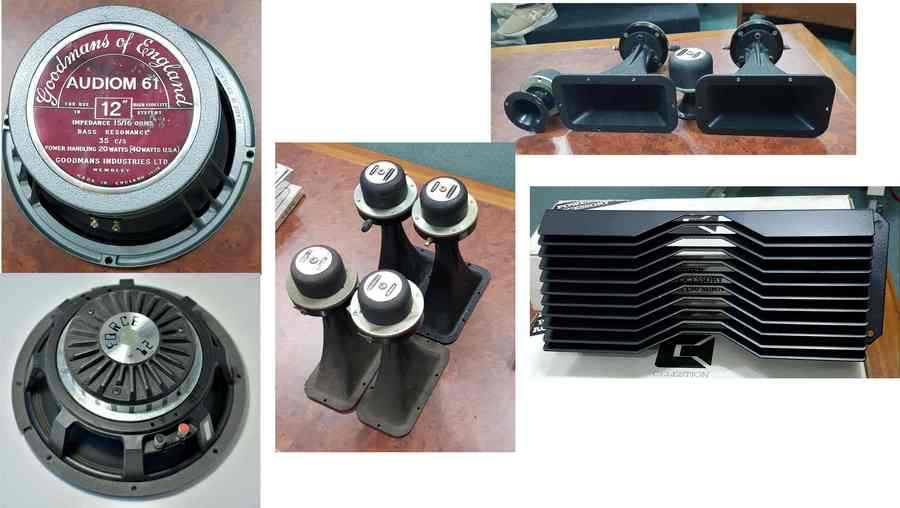 The speakers I had to hand were:

The picture Top Right shows a pair of Goodmans Trebax tweeters which I decided not to use as from previous experience I had found that they were fragile and very hard to repair.

Via a very good friend I also acquired four brand new Celestion lenses. Again from experience I know that mounting twin treble or mid range units side by side causes interference (a type of comb filtering) and lenses sort this problem out. Plus they look nice!

If anyone is interested troll the VOX website. VOX were the only amplifier manufacturer to sponsor The Beatles and their first amplifier used an Audiom 51 and Midax horn, later VOX switched to twin Celestion 12" drivers but kept the Midax.

The Force 12 is also a guitar speaker.

I had planned on using the Onken cabinet in Jean Hiraga format, but soon discovered that I needed more height to mount all the drivers and I decided to lengthen the cabinet by 200 mm thinking that if needed I could fit something inside to reduce the volume. I listened to both the Audiom and Force 12 out of the cabinets and whilst they a very different, they seemed to “blend” when played together.

The Audiom has a warm sound with quite a bit of upwards extension (the Axiom is basically the same thing with a wizzer cone attached) and the Force 10 a cleaner (less coloured) sound and also extends upwards. Both seemed to be equally sensitive (the Force 10 is rated at 98dB/Watt/meter). The Audiom sensitivity is unknown, but at least that of the EV's. The Goodmans has a 35 Hz Fs, the EV 55 Hz. 16 Ohm for the Audiom, 8 Ohm for the Force 12, but as I was going to drive them in parallel that didn't matter much to me.

The Cabinet itself was built with thick walls and all but the bottom panel and the two interior panels are 36 mm thick, the sides, top and front, ended up at 40 mm. The walls are made up from a 20 mm chipboard laminated together with a 16 mm supawood (MDF) and then a 4 mm Rosewood veneered ply. The chipboard has a plasticized black film on one side. 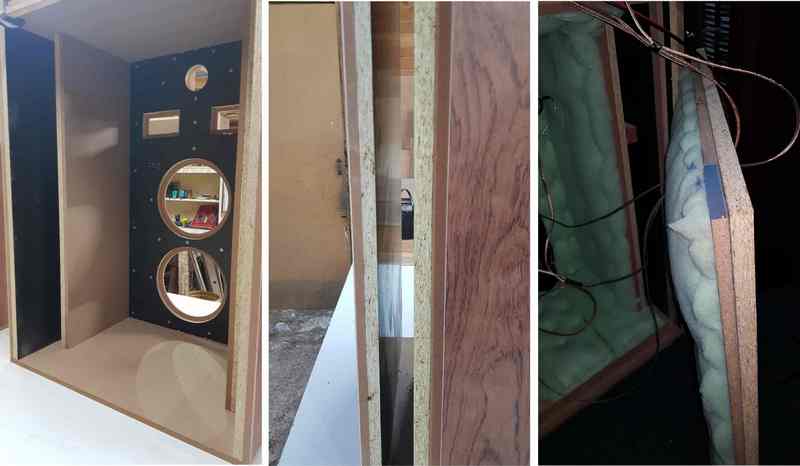 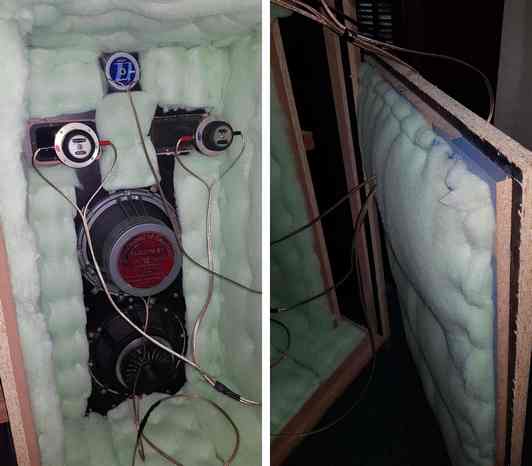 The damping material is a local type used for heat insulation and is slightly less good than fiberglass or Dacron thickness for thickness; however this is 100 mm thick before stapling in place and unlike Dacron or fiberglass it doesn't need small batons to hold it from coming apart. Unlike the standard Onken/Ultraflex designs, the rear panel is removable (26 screws) and stepped to give a good air seal. 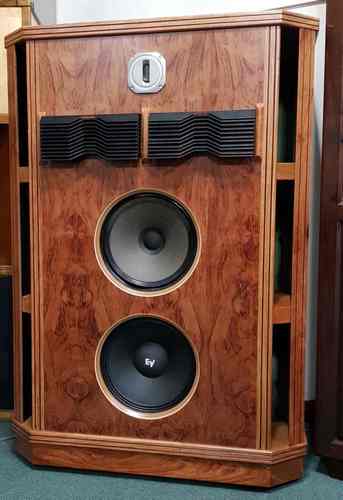 There have been suggestions by many, both on local forums and elsewhere, that Baltic Birch ply is the way to go with any speaker cabinet. Reasons quoted invariably include the superior sound or tone.

To that I reply: I am not building a violin where resonance or “tone” is needed or indeed wanted. I require my cabinets to be as non-resonant or “dead” as possible. MDF is more dense than ply - it weighs more.

Structural strength is not a requirement, as apart from its own weight the only work done is to hold the speaker driver from falling off so superior torsional stiffness is irrelevant and the build is such that the cabinets are enormously rigid.

Crossovers are very simple. The 12" units are driven full range in parallel, mid horns likewise but with a simple cap in series to limit the bass and the same on the slot tweeter. I used a variable resistor to limit the gain on the mid range but subsequently removed it as the speakers are in balance.

I don't measure my speakers as such (Shock! Horror!) but once I get the various drivers in balance I do run a sweep test to check if there are audibly noticeable peaks or dips. In this case there are none, or at least none that I and others can hear!

The astute will notice a gap between the floor and the cabinet. That is due to them being on casters, the bottom skirt is from 25 mm solid Rosewood.

The sound is, and here I am repeating from people that have listened - “very realistic, reproduction of the sax is as I hear it when I play mine, likewise the piano” and “you don't get better than this”.

I find it very easy to not hear the speakers, only the music/performance/recording with these cabinets.

This unlikely combination of speaker drivers works better at music than any speaker system have heard to date with one exception, and I own that.

They are transparent to the point where a cello or double bass is as you hear them in concert, no extra bloom, no enhanced sound, just natural.

I think a large part of this is due to the phenolic diaphragms in the Midax horns not being edgy as metal ones often are and the lack of inductors also helps (in my opinion).

Another opinion is that it is very probable that the DIY'er can build something very much better than anything but the most expensive bought system and sometimes better those. I encourage those who are able to try!