Trust in your ears only (official slogan) 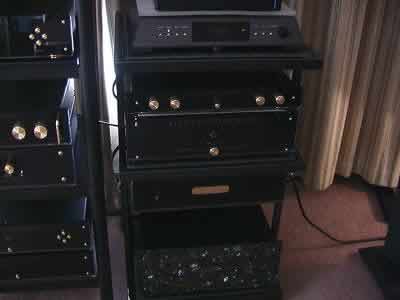 Vox Trade, with its one and only Mr Mladjen Vojinovic, one of the nicest people I have ever known, was of course there - and in full force. We were shown practically the entire production portfolios of Norway's Electrocompaniet and Denmark's Dynaudio.
Most would have been happy with that, but not Mr Vojinovic, who also displayed several units from Britain's Meridian and dCS, plus most of USA's Transparent Audio line.

Electrocompaniet is so well known and respected, in addition to being a company I feel very deep respect for, that I will waste no special time on them, but will say only this: I can't think of any other European company which beats the Americans at their own game so well as Electrocompaniet does.
The dynamics and spaciousness, but without any loss of detail, which most (but not all) Electrocompaniet products demonstrate, with that oh-so-typically-American feeling of limitless power, always leaves me drooling in the end. And the good Lord knows I wasn't the only one left drooling, they'll probably have to dry clean and repaint that room after the show.

Dynaudio, on the other hand, I'm not so happy about. Yes, they are supremely linear, unbelievably clean and detailed, with probably vanishing distortion, and can accept prodigious amounts of power with no signs of stress, but to me, they sound too cold, too analytical, almost clinical, which, by the way, is my general view of Scandinavian audio, with honorable exceptions (EC for one, and Dali has some models in the economy class I'd buy straight off, not to mention TACT Millenium, made in Denmark, but designed by a Serb, Dr Radomir Bozovic). 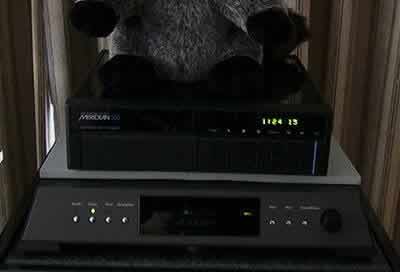 But the star of that room, and in its field the show as well, was the dCS DAC. With my apologies to our honorable Editor-san, if Wadia is what CD is all about, then dCS is what CD should have been all about, but never was. You want clean? You want warmth? Detail? Space? Vocals? Bass lines? Whatever? Buy this dSC and you'll get it all, but I mean ALL. As I hear things in this life, there's dCS, then one or two empty places, and only then do we see Wadia and others trodding along.
They used a Meridian transport in alternation with an Electrocompaniet transport, and in both cases, we got some sounds which are quite hard to believe. I wish to God they also had a JBL 4312, or S2600, on hand, for dynamics to blow your mind, because there, Dynaudio just doesn't cut it, good as they are. But, to its credit, even so, the dCS backed by some 250W per side from Electrocompaniet, went a long way in blowing our minds as is. An awesome combination that - EC power amp, Meridian used as transport, dCS as DAC and Transparent Cable for power, interconnect and speakers. Man, Pavarotti was THERE!

4Audio stuck to its basic formula, but did go out of its way, for once. These folks are plain dealers, they make nothing, just sell tons of it, and they are good at it.
They had a home theatre room which ran feature movies like "Matrix" and "Face off" at ear splitting levels, but the audience seemed to like it. I didn't, so I moved on, noticing the speakers were from Mission and Yamaha, and digital decoding and amplification were from Yamaha as well.

But the next rooms were much better. Two were dedicated to strictly commercial stuff from Technics, Marantz and Yamaha, with Yamaha, Tannoy and Mission speakers in evidence. It was all right given the price points they had set to match, but not even remotely exciting. Just all right.

The third room was the best. There, they had more upmarket stuff, such as selected models from Marantz (6020, KI, etc), Yamaha, Tannoy and Mission, introducing a reasonable NAD line there, and, lo and behold! - AR speakers!
Now, that made my day all right, and I was rather happy after hearing the prices. But real happiness set in after they connected the larger AR speakers to the NAD 317 integrated amp (newer version, the one where they got it really right) and used Yamaha's 993 CD player as a source - I don't know, perhaps that was a lucky shot in the dark which did kill the elephant, but that system sounded right. Not fantastic, not astounding, but definitely right, it had a rightness - and a rightiousness - about it. Very good in view of overall price, though no match for the truly great. No compression, good to very good focus, very good dynamics and I would say low distortion even at higher levels. 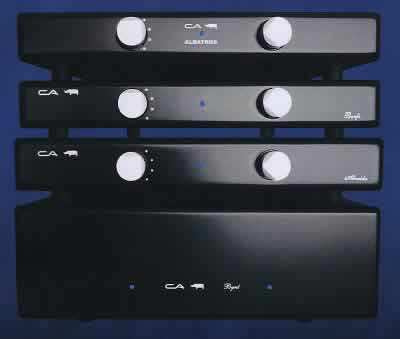 Cicmil Audio (e-mail enquiries: caudio@eunet.yu) is a small, start-up company founded by a Belgrade enthusiast, who just made his first public appearance. But he did so in style, offering one integrated amplifier, a tube preamp, a solid state preamp and a solid state power amp.
All solid state electronics have no capacitors in the signal path, and all have a frequency range out to 500 kHz (tube pramp to 100kHz). All have 4 line inputs and volume control only, but all are dual mono, and the solid state preamp can accept an optional phono RIAA board. All use very high quality gold plated, Teflon insulation RCA Cinch connector and heavy duty gold plated brass speaker connectors.

Mr Cicmil insisted on demonstrating his equipment line on speakers of his own construction, which I believe are not up to his electronics - not bad at all, but I think the electronics are better. The sound heard was a little veiled for my liking, and dynamics left something to be desired, but even after pressuring him, I could not get him to change the speakers.
Or the interconnect cables, which he also makes and insists on. Nevertheless, I think I heard through the speakers, so to speak, and will try to obtain these units for testing, as their prices are more than reasonable; for example, his tube preamp "Bonfa" costs just $380 ex-works, while his "Byrd" solid state power amp (2x70/120W into 8/4 Ohms, Sanken output transistors, 2x200VA toroids, 2x40,000uF capacitance) costs just $573 ex-works. And he gives discounts for system, so his SS "Almeida" preamp ($440) and SS "Byrd" power amp ($573) cost $970 if purchased together, a discount of about $40.

Try lifting them, and you'll see what the phrase "solid build" should mean. Minimalist design at minimalist prices, I'd say. But we'll see if they can be made to sound better yet - I think they can.

The best for last. Karan Acoustics (e-mail: vox@eunet.yu) was there too, with Mr Milan Karan, owner and designer, there as well, a rare sight, all 195 cm and about 105 kg of him. Well, he's a man who defies tradition and convention - some of his proprietary circuits are by default pronounced as impossible by engineers, who then learn they they are listening to the music from the impossible. I have seen this at work several times.

But this is High End - note the capital letters. This is what Krell used to be like, before going commercial, what Levinson still tries to be, and what every small company dreams of being. This is also a dangerous thing to be, as the whole philosophy hinges on the arguable genius of one man, backed by a competent team.

Let me come clean here - this is what clean sound is about, and these guys have it. It costs heavy money, but this is limited territory, not many are truly left in it sound- wise, though good marketing compensates it for most of them. You think I'm kidding here? How about a preamp which with its power supply in a separate box weighs in at 24 kg (53 lbs)? Or a 450/810/1,500W into 8/4/2 Ohms, which uses two 1.2 kVA toroids, with a damping factor of > 10,000:1, 8 Ohms, 20Hz-20kHz, weighing in at a mere 80 kg (184 lbs)? And costing only $3,879 ex-works? His printed circuit boards are all fully gold plated and he makes his volume control using a 64 position, 32 vacuum gold plate over silver relays and 0.1% tolerance resistors.

His DAC upsamples 16-bit to full 24-bit audio using four Burr-Brown PCM-1704 processors in a fully balanced topology for a dynamic range of 126 dB - guaranteed! His clock has a tolerance of - believe it or not - just 2 picoseconds! And he thinks about us poor folks, so he makes an integrated amp, which goes from DC-300 kHz at -3dB, uses a 600VA dual secondaries custom low loss toroidal transformer, with 2x40,000uF of high quality caps, for 2x180/300W into 8/4 Ohms, all in a neat, compact, 16 kg (37 lbs) package. This baby costs what would seem a most reasonable $ 1,234 ex-works.

Oh yes, they have a speaker, too, each box weighing in at 270 kg (620 lbs each!); it's a four way system, but it wasn't on the show. And no, I'm not going to test that one, if I put it on my condo floor it would probably go though the floor down and down, and I live on the eigth floor, so it's a long way down, and the post office, which is on the ground floor, would sue my pants off me.

The demos used Dynaudio speakers, which I think were well below the job in this particualr case. Good as they are, they are no match for these electronics, which I think could wreak havoc even on notorious speaker loads such as the otherwise excellent Apogee speakers.
Even so, the sound was, well, out of this world, easily the best, or at least among the very best I ever heard, Krell/Levinson/Kensonic/etc included. It reminded me of New Zealand's Plinius amps a little, which I also find to be supremely clean and effortless, but if memory serves well, Karan's 450W baby is still cleaner and more spacious. Either way, these are some electronics, I believe in no small measure so simply because Mr Karan has no plans to go commercial class, he knows what he's good at and wants to stay there, not dabble in what he knows would require compromises he's not ready to make.

Anyway, I asked for his integrated and he said no problem, anything I want. Now, that made my day once and for all. So, I expect that we'll have a full review sometime in January.

Of course, there were others too, but they were of no greater consequence. One company showed Primare and Copland systems, another was offering just about any connector, wire or plug you can imagine and some you can't even imagine. But these were me-too events rather than really interesting.

My only gripe about this show was the notion that audiophiles love jazz and listen only to jazz - at one point, everybody and their dog were playing jazz. Well, that cleared the crowds very quickly, so soon, we had more than just jazz again. Jazz is great for those who like it, especially when they want to get rid of those who don't like it, myself included. Just not my cup of tea, though I like Dave Brubeck's "Take 5".

All in all, the Belgrade Audio Show 2000 was an event well worth having and visiting. It doesn't compare with older, better established shows in Europe, in good part due to the poor economic situation after 10 years of sanctions and NATO bombing, but they all started out once and were all small once.
The point is it has started to draw the crowds back to audio, and it has started to fire up the local audio industry. I hope I will not be misunderstood when I say I think Serbia has much to offer and will indeed offer much in the years to come. Here's hoping. It's a good start. Well done, all.

Companies with products on the show (alphabetical order):