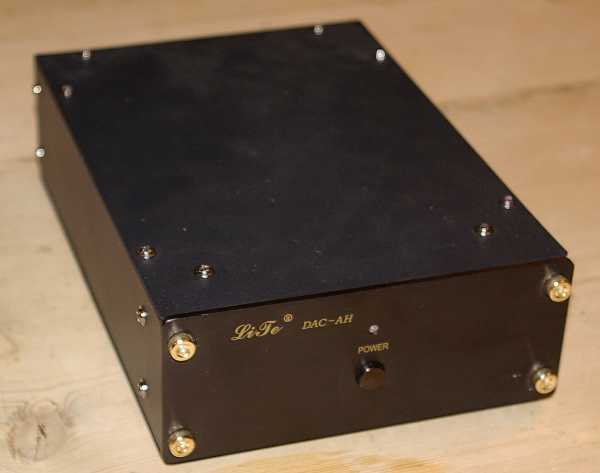 Many years ago in the early days of CD the little British company QED produced a stand alone DAC (one of the first) called the 'Digit'. It was a small plastic box with a wall-wart power supply. It cost about 200Euro which at the time was a bargain, and they sold by the truckload. I was reminded of this when reviewing the Dice DAC a couple of months ago. There again was a small plastic box + wall wart that upgraded any cheap transport and frightened quite expensive competition. It's a sign of the times that such a product actually costs less than the Digit and contained a few designer parts and interesting technology to boot - amazing...

But what am I supposed to think when a similarly priced DAC drops through the post, but in this case in a very well finished, bolted together, alloy box weighing 2 kgs and looking like it could cost 5 times as much?

First impressions are very encouraging, a sturdy and rather classy case, a simple push switch on the front and good quality connectors round the back, both RCA and Toslink. But never judge a book by it's cover - so 5 minutes of undoing bolts (not self tapping screws) and the guts are exposed. So what do you get? Well primarily a surprise! See that fat transformer, three independent regulated power rails, no less that 8 paralleled Phillips TDA-1543 Dac chips, a CS 8414 receiver and Burr-Brown op amp. A magnifying glass showed up Elna 'For Audio' and Sanyo caps . All laid out on a neat board. There are no 'boutique' components, it's just all good stuff. I think I'd be right in thinking that anyone trying to do a DIY copy of this would be pushed to buy the parts alone for the $200 asking price. This is one of those components that makes you feel like you've cheated the market, construction in China is obviously a big factor, but even then it's hat's off to Poth-Audio. 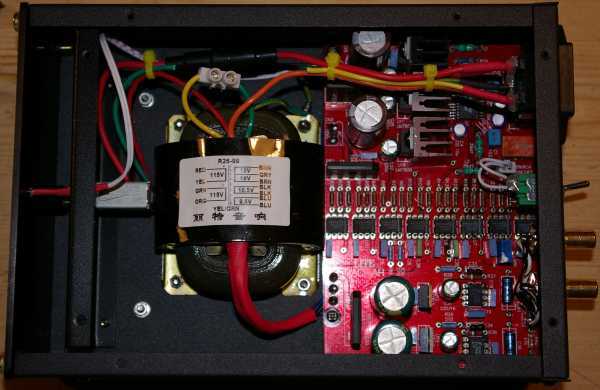 The DAC-AH is a zero oversampling DAC rather like the Dice mentioned previously, but in this case the whole thing is even closer to our own 'Convertus' DAC, particularly in the use of paralleled DAC chips, and as many of the technical arguments are common I'll send you there for the discussion on Zero-oversampling etc. 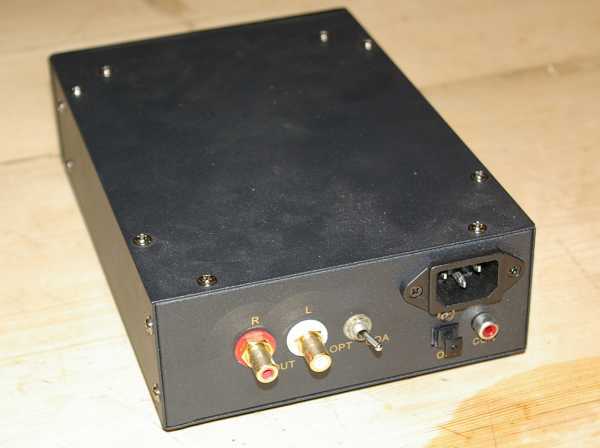 Like every other zero-oversampling DAC I've tried, the DAC-AH sounded a little flat and undynamic from new, only to improve over the space of a month. The worst in this respect (shockingly so) was the Audionote Zero, perhaps due to its valves, but the DAC-AH didn't buck the trend.

Once burnt-in the result was extremely pleasing. It's tempting not to be over-critical when reviewing something so cheap, and to be thankful it just exists, but in this case the DAC had to work it's way through several combinations in different systems, some of them costing many multiples of its price. However it was also interesting to compare it with the Dice at almost the same price point.

Once again the strength of the zero-oversampling concept came through with a lively presentation bubbling with energy and detail. In this respect it was very reminiscent of the Dice, but there were obviously differences. The Dice is not capable of the sheer scale of my more expensive DAC's noteably the built-in DAC of the Opera CDP 5.0. I had hoped that the DAC-AH might bring this attribute to the party, but the truth was that not only did it trail the Opera, but also by a much smaller amount - the Dice. One reason for this was a certain bass shyness; what was there was articulate and involving but the real growl of a big bass string passed it by, the bang! of a jumped on bass pedal having the leading edge but less of the substance. In some situations this can be an advantage, especially it'll help systems with poor bass control - better good bass than lots of bad bass - but with a full range system that bottom octave was a little lightweight. Remember though that the scale of the Opera is probably it's single biggest asset and you could buy 15 DAC-Ah's for the price.

Further up the scale the DAC-AH retaliated by being more refined than the sometimes rough-and-ready Dice, and this delightful midband performance rather dominated my notes on the beast. Being bass-light I can forgive and adjust to, but the mid-band is where the music is and the DAC-AH performed well out of its price range. Listening to female vocal in particular the DAC was a pleasure to sit in front of. Ultimately the big Opera is better at differenciating harmonising voices and giving the texture of instruments but it's not a huge difference. This excellent midband also enabled it to throw a reasonable sound stage, as good as the Dice, but unlike that DAC less prone to collapse when things get busy. I suspect the Dice would be better with a bigger power supply, but the point is that the DAC-AH doesn't need such upgrades.

The top end is pretty sweet, not vinyl-like and not as airy as better DACs but perfectly acceptable and again good for the price. There were times when I felt it was lifting certain 'tings' higher in the mix than ideal, and cymbals could be grainy, but reproducing a big crash cymbal is probably the hardest thing hi-fi has to do (and a noteable CD weakspot), so no great shame for a $200 component to fall a little short of the ideal...

Having become all excited about having found a DAC for my 'T-system' I guess it was inevitable that another would follow hard on its heels. Are we hitting a golden age in budget components? Certainly Chinese manufacturing and a hugely competitive marketplace are helping, but perhaps it's also that retail prices are now more closely reflecting manufacturing costs. I have no doubt that 5 years ago this DAC, marketed by a western company would have been hailed as a bargain at three times the cost.

So here's a budget piece of equipment that needs no excuses made for it in build, component or sound quality. It doesn't need to be hidden and you can fool your hi-fi friends who are not-in-the-know that you paid $1000 for it. It's not perfect of course, and it's a prime candidate for those of you who like to 'supercharge' equipment with better components - but as it stands the DAC-AH is a bargain. Yes it is obviously much more expensive than the T-amp, but considering its complexity and build quality it's value for money has to be of the same order.