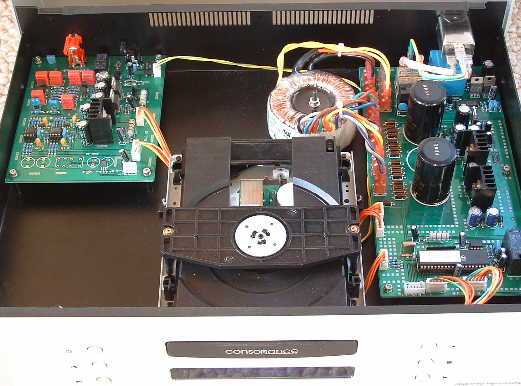 Consonance continue their relentless tide of new products with the "CD120 Linear high end player". No doubting their confidence in this product with a name like that, nor their chutzpah in announcing its pretensions at just 1030 € (converted from UK sterling price £695). Several other webzines seem to conflate this model's spec with the Reference 2, but this is hardly surprising with Opera Consonance's confusing rate of nomenclature and model release rate. However, during the months that I have lived with this player, it has received several awards of the 'best of year' variety. Does it match this hype, or is it just this year's flava?

Ian Large of Alium Audio made no claims for this player when he delivered it to my house, leaving its performance/price ratio to speak for itself.

So what do we have here?

It is a bit hard to pin down precisely what we are about to listen to as my net-trawls of Consonance websites appears to reveal different versions of the CD120L story. How very postmodern of them. The common features, as listed above, of the different specs seem to be that this red book cd player claims no oversampling and no digital filter. This is claimed to reduce phase shift accross the audio band and otherwise jolly splendid performance figures for the usually quoted cd parameters. I thought 88.2kHz sampling constitutes 2X oversampling, but who am I to quibble?

The non-Oversampling DAC concept is claimed to have been first proposed by Ryohei Kusunoki in late 1996. He states "the issue is not either it is Non-Oversampling or Higher-rate-sampling, but the use of the digital filter can cause smearing in the time domain."

Consonance claim that they have confirmed this "smearing effect on the sound caused by the use of digital filter" through listening experiments, and that it is very obvious. Consonance assert that the problems of red-book cd arise from the digital filter implementation rather than the 16bit/44.1kHz format. Having heard the various demonstrations of recording and playback at higher sampling-rate and bit-depth, I suspect the Consonance argument is rather an oversimplification, there are obvious technical advantages vs disadvantages to each approach, and audible differences too. The audible effects are not always as we might predict, and my time with the Zero One Ti48 upsampling hard-drive & Ar38 DAC provided me with ample opportunity to play with different sampling rates, filter topologies and noise shaping algorithms applied to identical red-book cd data. Perhaps, what Consonance have actually done is fundamantally changed one aspect of cd playback in this player, but whoever heard of a high-end audio manufacturer lacking in hype & chutzpah?
"The sound of Progression is enough to prove this matter," Consonance claim, enigmatically.

This output filter topology is attributed to Yoshi Segoshi, who I uderstood to be the original translator of Kusunoki's papers into english. Confused? This reviewer is certainly confused, because I do like to understand the provenance and evolution of ideas have emerged, both in technology and in music. For most folks, what really matters is the sound quality, not the technology or its history. It is useful to know when different products share similar technologies or philosophies, because these will usually give some clue to the predicted sound, and thus enable readers to decide whether to travel to audition similar products. UK originated Audio Note DACs immediately spring to mind. "In Progression I/V conversion is handled by a passive device instead of an active one. The result is a superb transient response without any over-shooting, and still maintains the output voltage of 2.35V". We shall soon hear whether these claims are borne out by experience, as the Chevin audio modifications to my Shanling CDT100c were philosophically similar and very effective, although the Shanling output is reduced to normal line-level whereas the consonance is a very high 2.35V, so beware the extra thrust this player gets in a retailer's A-B comparison. 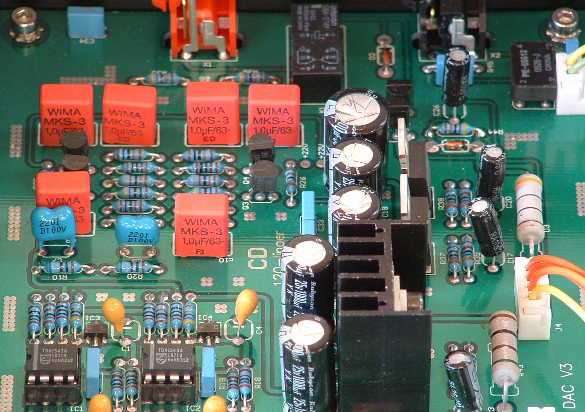 The more I read of the theory, the more sensible it seems to me. The only caveat might be that if this player is connected to amplifiers with high levels of global feedback, or perhaps with poor slew-rate limits, those amplifiers might be upset by the sideband images that might be present in the ultrasonic domain.

The CD120L, as I will insist on renaming this player for brevity's sake, also has no op-amps in the analogue stage, just JFETs. FETs are known to have distortion spectra more similar to valves (tubes) than bipolar transistors. JFET lower-order distortion products are reputed to swamp, effectively, the much harsher sounding higher-order distortion products. Also JFETs allegedly have better balance between even-order distortions and odd order distortions; even order (2nd, 4th etc) sound like a creamy old Vox AC30 guitar valve-amp, while odd-order (3rd, 5th etc) sound like a cheap 9V fuzz-box. Many years ago Sony based a whole upmarket range on these properties of FETs.

This player is as sensitive as most reasonably solid cd players to the support underneath it. Like most motorised audio-storage retrieval devices, it benefits from a non-resonant firm support. It gives of its best mounted on the Something Solid rack due for review soon. No further benefit is gained from adding an extra isolation shelf upon the standard one supplied with this rack. It does benefit from standing on either Something Solid Dissipating Feet or on Avondale Audio feet in place of its own. Either of these latter options is indistinguishable from the other, but both release an extra degree of pace and clarity. 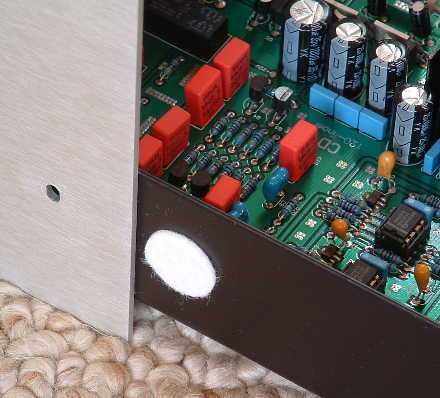 Typically the sound opens up slightly when the top cover is removed, but placing a BrightStar IsoRock5 on top of the player achieves a similar, and safer, effect. The top cover is a folded sheet of brushed aluminium. This as thick a sheet as I have ever seen, beaten only by those components that use much more expensive billet aluminium casework. Furthermore, the lid is damped against the base chassis by 4 large felt pads, which is excellent at this price-point. Regular readers will know that I prefer non-metal casework but this is close to the ideal on a mass-produced item.

Cable choice usually depends on the source componant rather than the input, but this player is fairly insensitive to wire. It seemed to work OK whatever I hooked it up with, although Consonance's own cable is a very tight fit on the plugs, threatenning damage. Thinner, lighter mains-cable may be slightly better than Consonance's optional hawser, but the differences are tiny and I would not be able to identify them blind.

Inside there are a few Wima MKP caps on the output board. There's some big electrolytics whose labelling is a clever mimic of BHC, without actually breaking any copyright laws. The audio supply juice feeds from a good sized toroidal transformer (whose electromagnetic-field is therefore predomionantly vertical) spaced well away from the converter and analogue sections. The boards look well made and well spaced in the case. Better yet, there is a solid feeling anodised black remote control that is a pleasure to hold and use, and therefore MUCH BETTER than those horrible plastic ones often supplied with much more expensive players. Along with the usual Consonance white cotton gloves, this remote control inspires confidence and pride of ownership, so other manufacturers take note please; plastic remote controls belong with cheap supermarket DVD players, not high-end audio. 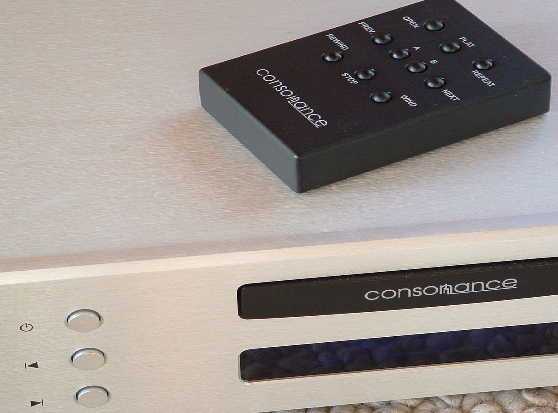 The cd 120linear sound is a different experience from the digital familiar. The high frequency timing is in a higher league than most digital sources. My 13 year old son immediately noticed that, compared to my modified Shanling CDT100c, the high frequency percussion (cymbals, tambourines, bells etc) is more coherent, in a way that is usually lacking with red book digital. This one area the Chevin Audio modifications have lifted the Shanling way above average, so the Consonance CD120L is in a very special league for timing.

Even with output as processed as Pony Club the percussion in The Streets is obviously better than the Shanling, although the Shanling has much better midrange, especially vocals. The hotrod Shanling displays more coherent low-frequency rhythm with some material, but the Consonance is more pacey with some dance music.

This is a tough experience to describe, as rhythm pace & timing (PRaT) are usually the province of one product in any 2 componant challenge. The Avondale Arcam Alpha 5 has always been my digital benchmark in the PRaT stakes. Indeed, my preconception, after the first, brief audition, was that the Consonance cd120 linear would fall some way between the Avondale Arcam and the Chevin Shanling in most respects, but it gradually surprised me with its impeccable timing performance. Experiences like this are what make all this hi-fi activity worthwhile.

I anticipated that the Avondale would have best PRaT, Consonance second and Shanling third; but that soundstage, timbre & naturalism would be the reverse of this order; that these would be the placings for the whole bandwidth and all instruments.

Wrong!
The Consonance times superbly at high frequencies, better than any I have heard from cd before, yet it is far less coherent at midrange and lower frequencies than might be expected from this performance. Tenor and bass registers are still best served for rhythm & timing by the Avondale. Hence the Avondale still punches well above its weight for pace, indeed, the Avondale flits like a butterfly and stings like a bee in the heavywheight championship of the bass.

Ian large notes that the cd120L responds well to tweaking. He suggests a good inexpensive mod is to change the input caps to 0.47uf Hi-Q black gates, and use SCR 1.0 uf caps on the output stage. I would endorse both these proposals as likely to lead to worthwile improvements, having tried both series of caps myself, but this review is straight-from-the-box.

I'm lucky enough to have the DAS Harefield active loudspeakers in the system at the same time as the Consonance cd120 linear. This combination are providing the best phase performance, from a digital source and moving-coil loudspeakers, that I have ever auditioned. This is a new benchmark for this parameter, with these technologies, in my experience. Not many mid-price products can boast such excellence in any parameter. 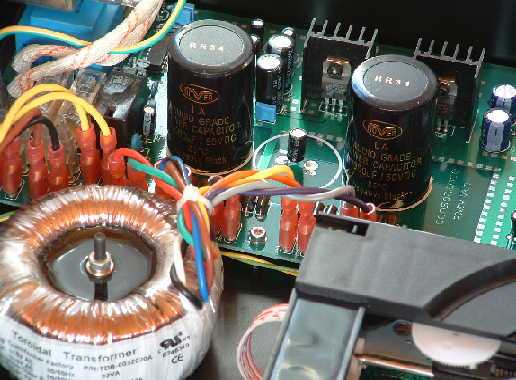 TNT-Audio tells it like it is. We do not have to pander to advertisers, nor to readers who demand a flavour-of-the-month conclusion. Our findings tend to be less clear cut, requiring more work from you, dear reader.

The Consonance cd120 linear cd player does a lot of stuff well. It performs some parameters better and some not-so-good as other players. The Consonance is competent in most parameters at the price, but its forte is timing. YOU, the listener, have to decide whether this is the stuff that lights your candle. Percussionists should love it for its clear portrayal of all those tinkly bits of tackle they like to tap.

BUT, no other player has this balance of virtues at this price. and if you want this unique balance of musical virtues...
You should listen to the Consonance cd120 linear cd player...

The Consonance cd120 linear is an outstandingly musical player at its price-point and if that sets your pants on fire, I recommend you take a listen. Take a listen anyway, just to hear how good red-book cd can time, because cd theoretically shouldn't be able to time hf this well at its sampling rate.