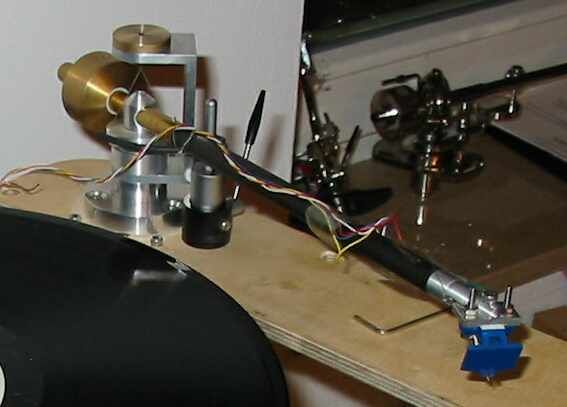 This sort of tonearm has raised a lot of interest through its uncommon construction: suspended by strings, held and positioned by two strong attracting neodynium magnets. It got very much praise on hi-end shows, be it in Germany or abroad. It is unique in its presentation, and built with a watchmaker's precision, that is what audiophiles all over the world lust for.

Friends of mine bought it and praised it, too, saying it would be better than an SME V. So I asked Mr Schroeder for a sample ...

Mr Schroeder has a whole range of tonearms, a budget model No 2, a standard model No 1 and a Reference model. The last one even allows repeatable VTA adjustments similiar to the SME V. Due to high demand and a long backorder list, a current production review sample was not be available. But a used one was available, so I tried that.

Now I am the owner of a used Schroeder No 1 tonearm since beginning of July 2002.

Unique to this tonearm is, like to all Schroeder toenarms, the string suspension and the magnet loading. To understand this, one should have a look at Frank Schroeder's web site, which - ahum - is a bit basic, but shows how the tonearm is working. More pictures showing more details and possible armwands are on the web site of Schroeder dealers and importers.

What I like with this construction, is that it never wears out, because the only thing that can go "kaputt" (damaged), is the string, which is basically a fishing line, that you buy in special shops. I appreciate that this tonearm is made to last very long without any doctor needed, having seen (and repaired) gimbal toenarms like Zeta and Linn Akito with sticky bearings or unipivots like ARO or Moerch with damaged bearing cups respective bearing spikes.

Said tonearm is a used one, sold by its maker, Mr.Frank Schroeder in commission for a client, who needed selling. The tonearm itself was made in 1986, and it looks like a mix between current No.1 and No.2. It has the same armtube and general construction like the current No.1, while the mounting base looks more like that or current No.2, while being beefier, compatible with Linn mount rather than Rega mount. The wand of the No.2 is a double layer carbon construction, and not interchangeable. Mr Schroeder confirmed that there is no difference in sound between this used tonearm and a current production No 1, but current production No.1 have even better built quality and setup is now independently for the crucial parameters.

The wands are interchangeable and additional wands can be bought separately. I got this tonearm with 9 inch carbon wand, made of triple layer carbon. For reasons of comparison, I had a second wand made from ebony. Mr Schroeder told me, that this ebony wand was only for comparisons, and that current production armwands are built different. Wooden armwands can be made from a wide variety of woods, not only ebony or palisander, but also balsa (for highly compliant pickups) and many others. The choice of wood should be guided by the effective arm mass which is suitable for the cartridge. Whereas the carbon wand has approximately 12g effective mass, with wooden wands a wide range of effective masses is possible, suiting cartridges like VanDenHul Colibri as well as Ortofon SPU Royal N.

The wands have aluminium mounting platforms at the front, where the offset angle could be adjusted in a range of a few degrees. The wands are going through a hole, where a fixing screw clamps them. The rear end comes then out of the other side of the hole and the counterweigth can be attached then. Overhang and azymuth can be adjusted by loosing the fixing screw for the wand and pushing respectively rotating the wand. It is not possible to do these adjustments independently with my tonearm, and when adjusting the overhang, balance and tracking force have to be adjusted afterwards. Though current production Schroeder tonearms are made to do these adjustments independently, as the rear end is fixed with the bearing, and only the front wand is changed. Both wands came without internal cabling (for costs reason ;-)) and I installed my tonearm wire at the outside of the tonearm. So it was possible to change wands, keeping the same cable and cartridge holder, just by unscrewing 3 screws (one for the cartridge holder, one for the counterweight, then the fixing screw), moving 2 adhesive tapes for the cables. I was able to change wands in five minutes, then.

The tonearms base has a fixing screw for VTA adjustments, similiar to those found on most British tonearms, like Linn Ekos. The magnetic gap can be adjusted with a hex key, and the antiscating with a knurled knob. I adjusted the magnetic gap quite wide, as it affects the damping of tonearm movement, and I do not like the sounds damped too much. I also do not like using the damping facility on SME tonearms. 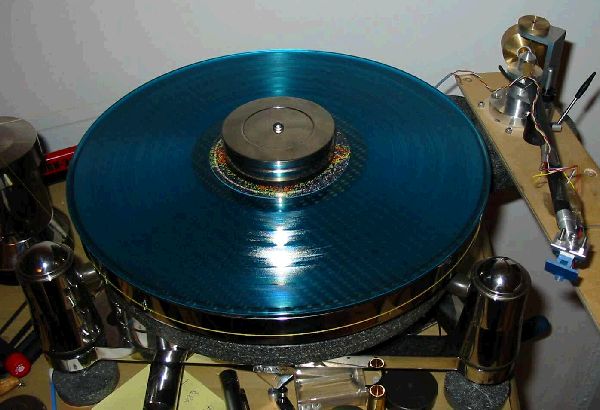 My sample is 16 years old, and it looks, well, like a used tonearm, but not better or worse than a British one that old. All threads and screws are well built, the wand does slide well in its fixing hole, and the counterweight can be moved gently on the rear end of the wand. I have seen tonearms corroding after 10 years, e.g. a Graham 1.5 which was offered s/h by a Munich hi-end dealer, but all signs of age I see on this Schroeder come from the brass, which is getting darker a bit. Though current production Graham tonearms are looking like they are made substantial better.

How does it sound

So far I tried Linn Klyde, Linn Arkiv 1 and Tubaphon EMT TU2 with this tonearm, and I never was disappointed. The moment the needle hit the groove, I immediately experienced a naturalness and an ease of sounds, especially with voices and natural instruments, which are uncommon to most tonearms, even in the superarm league. The total absence of mechanical sounds was seducing, comparable to my earlier experiences with air bearing tonearms. There was no highlighting of treble or details, like known from some superarms, just as if this tonearm was invisible. The spectrum of colours was wide, near infinite. GREAT!

What about bass? Now, before listening I suspected that the string suspension bearing didn't have enough rigidy for good bass, like most unipivot tonearms in real world use. Even in this respect the Schroeder tonearm surprised me in a positive way: the bass was both tight and natural, like combining positive characters from both gimbal and unipivot tonearms.

Now the two arm wands: At first I listened with the carbon wand, then I installed the ebony wand. At once a big grin came to my face. Voices so beautiful, music so integrated ... like a very good tube amp, I was immediately reminded of Shindo, the music appeared to be supernatural. Penderecki, Varese, Xenakis, Beethoven, Berio, without exception, they voted for Schroeder. But when the going gets tougher, like with pop music or 70ies Jazz, I preferred the carbon wand, which is leaner and cleaner and less damped. And when I want it to rock, Tori Amos, The Doors, Bill Frisell, Frank Zappa, Art of Noise, John Coltrane, they all decide for the Schroeder tonearm.

Now, how good is the Schroeder relative to its competitors? Bearing in mind, that I listened to it only on two turntables, Pluto 10A, and Thorens TD124-1, I can say, that it is above most superarms like SME V, Wheaton Triplanar, Immedia RPM2, Forsell Air Bearing tonearms, which I owned, too. I am quite disappointed with some superarms, as they can sound disintegrating or mechanical, a price paid for high, sometimes exaggerated, detail resolution. Among those, I consider the SME as the best of the rest.
What I missed a bit on the Schroeder was the ability to produce a big, seamless impact like the Pluto gimbal tonearms are able to, which have the same wholeness, but sound a bit less natural. BTW, the Pluto tonearms are way more expensive than the Schroeder, that says it all.
According to Mr Schroeder, his Reference tonearm uses magnets which are lot stronger, and thus is more powerful in the musical presentation. I would be happy to confirm this in another test. To judge the Schroeder from the musical reference of known tonearms, that old SME3012-2, it plays on its merits and extends frequency range and resolution without sacrificing that what the old SME is famous for, namely musicality.

To condense it in one phrase, especially when listening to classical music, there is really no alternative, even if cost is no object.

I heard saying that the Schroeder also matches with Platine Verdier and Scheu DIY turntable, but cannot really comment on that. Mr Schroeder himself uses his tonearm on a grease bearing Garrard 301 in a Loricraft style plinth. If there is a tendency in sound character at all, then there is a slight warmth, as a consequence of absense of mechanical resonances, so it can be combined very well with hi-resolution hi-end cartridges, and also with hi-resolution phono stages.

This Schroeder tonearm is absolutely and relatively an excellent audio product, with no real competition at its price, and one has to spend a lot of money to get something similiar musical. Built quality, construction, expected longevity, naturalness, resolution, dynamic, in every respect, the Schroeder tonearm defines the current "State Of The Art" of tonearm production. The retail seems to be high, but for a hand made product of such a quality, it is cheap. Needless to say, I bought that review sample.

As soon as current Schroeder tonearms are available for review, a follow-up will come.