John Miles, guitarist & arranger, dies aged 72 after an incredible career as a vocalist, guitarist, keyboard player and musical director & arranger. John Miles picked up numerous awards throughout his career and he's probably best remembered for his solo career peak in the mid 1970s. During the 1970s John Miles had four top 50 albums & four top 40 singles, when chart places were harder earned, as well as numerous prime time TV appearances. Similar success in the US charts led to John Miles and his band supporting Elton John, Fleetwood Mac, Aerosmith, Jethro Tull & the Rolling Stones on US tours.

Your Old Scribe saw John Miles live in 1979 when revisiting his home town. Our group of friends went to an open air gig mainly to see local NWBHM rock band Jameson raid. Headlining the show was John Miles who we'd heard on radio & TV. From our stage front vantage point we were impressed with John Miles's craftsmanship, musicianship & songwriting skills. There was a confident fluidity to John Miles' playing that simultaneously had us both relaxing and bouncing about. Wolverhampton Borough Council had noise complaints from 25 miles away according to the local rag. 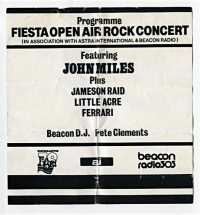 About the same period John Miles contributed to Alan Parsons Project albums Tales of Mystery and Imagination (1976) and Pyramid (1978), which have been audiophile & audio show staples. John Miles also appeared on a BBC Sight and Sound In Concert watched by a young scribe's circle of neophyte audiophiles. This programme is of historical interst to audiophiles because it was a simulcast. The gigs were simultaneously transmitted on both BBC Radio FM stereo and BBC television, usually on Saturday evenings. So dragging the family TV to our audio systems or vice versa was necessary. In those days most European families had just one bulky limited audio bandwidth cathode ray tube television in the house which will be an unrecognaisable scenario to anyone under 40. Therefore the BBC Sight and Sound In Conceert shows were an early opportunity for watching as well as listening to live or recorded music in the home. John Miles was one of the memorable early examples.

The onrush of punk dominated the music papers and the daily tabloids which in the UK sidelined many of those musicians associated with the previous rock generation. John Miles responded by touring with Tina Turner as keyboard player, guitarist & backing vocalist and playing on her albums. John Miles also played Hammond organ for Joe Cocker and took the vocal parts of Robert Plant & Paul Rodgers for Jimmy Page. The last 20 years of his career saw John Miles involved in musicals. John Miles remained married for 50 years, another unusual success for a rock musician. John Miles was born in Jarrow, in the North-East of England and died 72 years later just down the road in Newcastle.