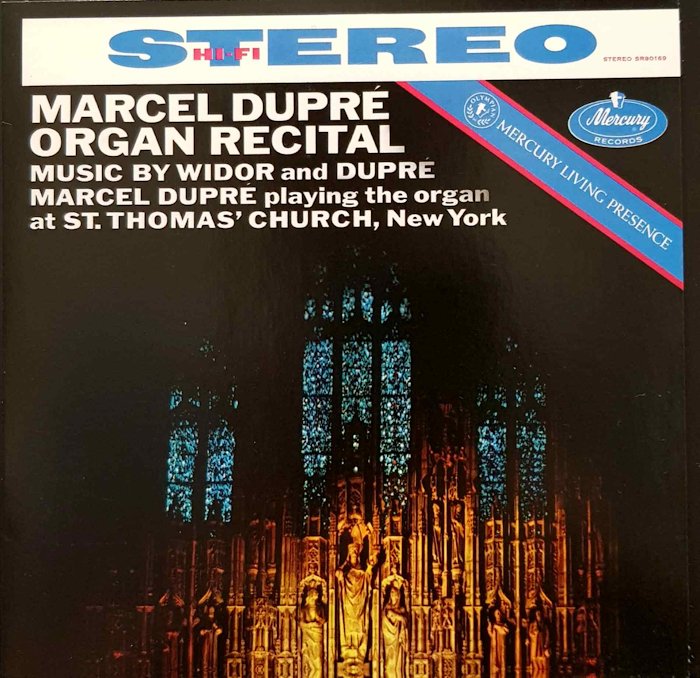 In trying to review a recording as opposed to a performance, let alone a re-master or "repair", there are many things to be kept in mind. Some of them relate to how the original sound was captured, how, over time, other releases were made and then finally the benefits or not of the current offering. Mercury Living Presence has always been somewhat special as from the start Bob Fine who designed the scheme to follow for all his recordings was ever the tinkerer, always wanting to do better and willing to change the actual recording process, but staying true to his original concept of what worked best from the microphone placement point. A single microphone for Mono and three for Stereo hung around 25' and over the orchestra rather than at instrument level as he determined the best capture point was there. Mix down to Stereo essentially split the center microphone feed and added to the Left and Right. This was usually handled by his wife Wilma Cozart (Fine).

After Mercury had been sold off and CD's arrived, it was decided to re-release the Mercury catalogue. As it was a less than stellar offering, it didn't sell so Wilma Cozart was dug out of her retirement (Bob Fine having died), the original tape equipment and mixing gear exhumed from her basement and resuscitated. (Note 1) Wilma went to work using the original Master Tapes and the Mercury catalogue of classical works as we know them today, released. During this re-mastering some works were mixed down to LP and one that springs to mind is the multi record/disc of Janos Starker's rendition of the Bach Cello Concertos. I had both versions and all my audiophile friends marveled at the sound of the LP's and whilst appreciating the CD version they all favored the LP set. Wilma Cozart is on record having said while the LP's were very good with a warm sound the CD's were closer to the original Master Tapes. Here's a link to the article on TapeOp.com.

I limit myself here to the Mercury recording of Marcel Dupré, circa 1957, playing the Aeolian Skinner organ in St Thomas' Church, New York. Original release on Mercury LP. The comparisons here are from the Wilma Cozart CD mix-down and the latest by her (and Bob Fine's) son Tom Fine, with "repair" work by Jamie Howarth's Plangent Process. 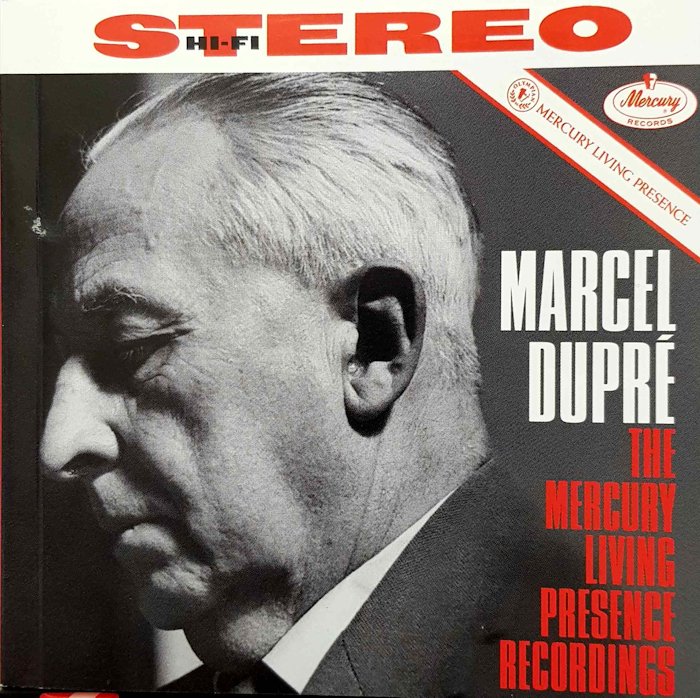 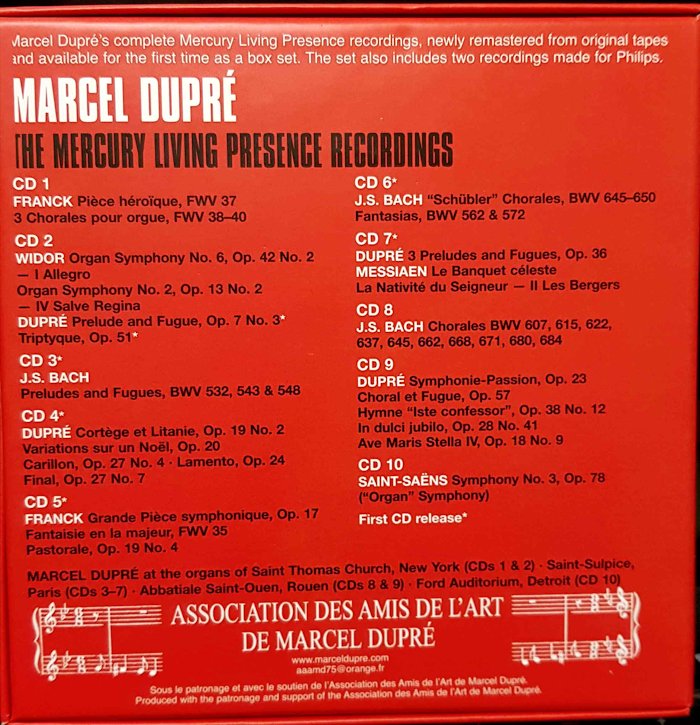 Quoting from the Plangent website: «Every analog magnetic recording starts with a motor dragging a rusty strip of plastic over rollers and guides, across scraping metal parts», which pretty much describes the tape recorder. Wow and flutter, scrape flutter and a whole host of problems go hand in hand when the engineer tries to resurrect an old recording. Tape degradation where time has dried out the binder sticking "the rusty bits" to the tape and something called "sticky shed syndrome" which can cause the tape to stick to itself plus the age of the replay equipment just add to the hassle. For a better run down of the Plangent Process see here. For a more technical explanation see the AES Paper and also the Interview with Jamie Howarth.

The Aeolian Skinner organ as used in this recording was finished a few days (mid June 1956) after G. Donald Harrison died of a heart attack which was brought on by working long hours in sweltering heat in order that the organ would be ready for the inaugural concert to be given by Pierre Couchereau, titulaire organist of the Cathedral of Notre-Dame, Paris. The recording under review here was performed by Marcel Dupré on October 17, 1957 and was completed in the early hours of the morning, with many stops and re-starts due to traffic noise and the rumble from the subway which passes under the church.

For the recordings three omni-directional microphones were suspended 30' above the floor and somewhat back from the organ case and the microphone signals sent to the "Mercury Truck" parked outside the church. It is not stated what recorder was used but as the subsequent re-masterings were done on Ampex recorders I assume the modified 3-track Mercury Ampex was used. The Wilma Cozart re-mastering is the stuff of legend, see note 1 above. This re-mastering is by her (and Bob Fine's) son Tom Fine. The first generation 3-track tapes were transferred to high resolution digital using the Plangent Process. This aligns the audio to the high frequency bias signal on the tape. The process removes time domain "smear" caused by the mechanical processes of recording and playback along with other issues such as scrape flutter, which results in greater clarity and a clearer stereo "focus".

Anything I could say about about this latest set of recordings can be summed up by the following sound clip. The first part is from the Wilma Cozart CD then repeated from the Tom Fine/Plangent rendition. The difference is quite startling, especially when played on a hifi system - there is a huge increase in clarity and detail. In the Cozart version the organ action is just not there whilst in the Fine/Plangent take not only is the action noticeable but faults in the action come through too although you won't hear this in the clip. Total playing time is just over a minute. Widor, Allegro from the 6th Symphony. For organ buffs the following link is to the Aeolian Skinner organ of the time.

From what I can hear the Plangent Process is a very worthwhile change for the good. Jamie Howarth's credits stretch through from The Grateful Dead to Woodie Guthrie and many others.

All fed through a custom switching unit that allows instant coupling any of the amps to any of the speakers.