Firing on All Cylinders

Part I: Some General Remarks

Miracles do occasionally happen. Consider cylinder records and phonographs. Both disappeared from the market in 1929, by which point the players were yesterday's technology and much of the music recorded in that format was unfashionable or downright corny. Yet today surviving cylinder records and players remains readily available if not abundant on auction sites and in specialist forums; yes, some rarities command high prices, but many cylinders routinely sell for only a few dollars, and basic players in good condition can be had for around the price of a modern Pro-Ject or U-Turn turntable--maybe a third the cost of an iPhone X. A miracle, indeed.

Even the miraculous, however, can come with a learning curve, and cylinders are no exception. With this article and its successor, I intend to take the reader—prospective collector and simply curious alike—by the hand for a brisk walk up that curve. My goal is to provide basic familiarity, an understanding of the fundamentals. I don't plan to be exhaustive, and I hope you won't find the journey exhausting, either.

Any good tour begins with a published itinerary. In our case, to keep things manageable, I’m going to limit the discussion to the common types of cylinder record and Edison cylinder phonograph that an aspiring collector would be most likely to encounter in the United States. Why? In the first place, machines sold by Columbia, Edison's sole major US competitor, seem to be more scarce, even though they originally tended to cost less than their Edison counterparts; not surprisingly, those of more marginal competitors are even more uncommon. Second, Edison machines were sold worldwide and so are likely to turn up everywhere; I don't know what's most available in markets outside the United States (although I would expect Pathe to predominate at least in France), but I think it's a fair bet that Edison phonographs are at least present in most of them. So, with those ground rules set, "Button Up Your Overcoat," "Pack Up Your Troubles in Your Old Kit Bag," and let’s "Tramp, Tramp, Tramp," shall we?

To begin with the records themselves, all cylinders are shaped as hollow—well, cylinders, like a Campbell's soup can with both ends lopped off, and usually about that size: while some in other sizes certainly were issued, the common, standard ones were roughly four inches long by 2.25 inches in outside diameter (for those of you with a metric fixation, that's about 102 mm long by 63 mm in diameter). The inner surface of a cylinder may be broadly ribbed or smooth, may or may not be of the same material as the outer surface, and may have metal reinforcing rings at the ends. Unlike the outer surface, which is perfectly square across, the inner surface tapers slightly, meaning the openings at either end are of slightly different sizes. The earliest cylinders carried little or no identifying information, but later ones usually had the name of the selection, maybe the artist, and the catalogue number engraved in the thicker end, which could be squared off or beveled. The groove runs around the smooth outer surface like an extremely fine screw thread and plays from the end with the larger opening (never labeled) to that with the smaller one (likely labeled). Groove pitch is 100 threads per inch for a two-minute cylinder, 200 for the later four-minute type.

In general, cylinders were manufactured either from solid "wax"--actually a mix of various ingredients, like paraffin and stearic acid--or as a liminate with a celluloid playing surface over some sort of supporting core. Wax cylinders could be white (very early), tan to dark chocolate brown (later, but still early), or black (after about 1902). Two-minute cylinders were made of softer wax than Edison's four-minute wax "amberol" cylinders, which tend to be more brittle, but both types wear down with play and are fragile, calling for careful handling. In particular, one should avoid touching the playing surface; to hold a cylinder, spread your index and third fingers to engage the inside surface.

Celluloid cylinders, in contrast, do not wear appreciably. Edison's were all of the four-minute type and had a core of plaster, which is more rugged than wax but still can break up, leaving the playing surface to deform beyond playability, or swell, preventing the cylinder from mounting properly on a machine or even splitting the surface. Some other manufacturers' cylinders had a cardboard core, often reinforced with metal rings at the ends, making contact with the player only at the ends to avoid Edison's patents on the tapered cylinder bore. The most common color for celluloid cylinders is a dark cobalt blue, that being what Edison chose for his "blue amberol" four-minute cylinders, but Edison also issued a line of celebrity celluloid cylinders in purple to compete with Victor's red seal disks, and other companies issued celluloid cylinders of both two- and four-minute types in black or pink.

Turning to players, the "mandrel," which corresponds to a disk machine’s platter, appears to be a rotating metal cylinder driven by the motor but actually is slightly tapered to match the inside of a cylinder record, technically making it a truncated cone. The mandrel always is supported by a bearing at the larger, left end, in later machines exclusively so. Earlier machines featured a second bearing for the right end of the mandrel, mounted on a swinging support bar or "end gate." In these models, before playing the cylinder one must swing the end gate across the right end of the mandrel and latch it into place; after play, one must release and pivot it back out of the way before removing the cylinder.

Each machine will have a "reproducer," corresponding to the modern phono cartridge. It is a round metal box with a stylus mounted underneath and a small tube jutting from the top. The sound emerges from this tube and passes, either directly or through a little piece of rubber hose, into a horn, which brings it up to room volume. Some Edison reproducers are equipped with selectable dual styli to play both two and four minute cylinders, but most have only one for one type--the most common are the Model C and for the latter a Model H. They look largely the same, but be careful: playing a two-minute wax cylinder with a four-minute stylus will damage the record.

The reproducer is mounted in a sliding metal carrier that arches over the mandrel. (The reproducer was fixed and the mandrel moved under it in some late Edison machines, but these uncommon and expensive models are outside the scope of this article.) A "feed screw," or long, threaded rotating rod, drives the carrier, and hence the reproducer, across the face of the record mechanically in syncrhronization with the lateral progress of the record's groove. The feed screw may run behind and parallel to the mandrel, or it may be an extension of the axle on which the mandrel rotates. In either case, it may run at a single speed, in which case it will be limited to playing only two-minute or only four-minute cylinders, or it may have a gear shift to accomodate both.

To position a record for playing, slide it to the left onto the mandrel like a sleeve, starting at the end without title engraving, if any. If you start with the wrong end, the cylinder will bind on the mandrel long before sliding all the way on. Because of their matching taper, when properly placed on the mandrel the cylinder will snug against it and stop rather than sliding all the way across and off the other end. Be careful: depending on the material from which a cylinder is made, if you press it too hard onto the mandrel, you can easily burst the record into bits. As noted above, the plaster core of a blue amberol cylinder may have swollen to the point the record won't fit on a mandrel; if so, you can cut it back down to size with a "reamer," readily available from specialist supply houses and on eBay; in essence, a "reamer" is a tapered wooden rolling pin with coarse sandpaper glued on. Expect one to cost around $25 to $30 in US currency. 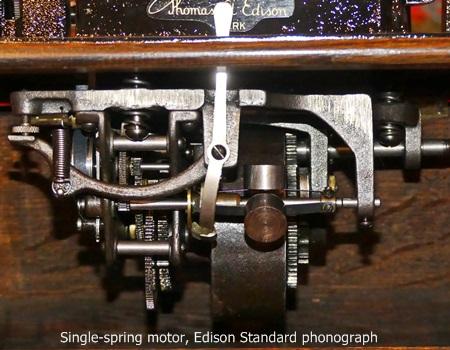 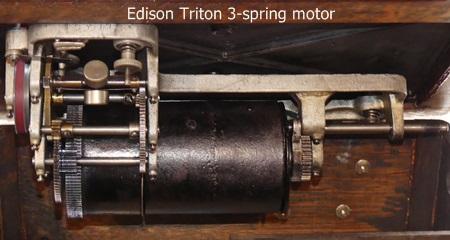 Naturally, to play the cylinder, some motive force is necessary to turn the mandrel. Surprisingly, the first Edison machines actually had electric motors drawing power from wet cell batteries. Other sources of motive power, early on, included treadles, like those driving the contemporary home sewing machines, and even water pressure. Eventually, however, the company settled on spring motors as the most practical solution for service in the home. Various designs were offered and sometimes recycled; the Amberola 30, for example, was fitted with the motor designed for the Fireside open horn model. Most Edison motors had a single spring. By contrast the largest, the "Triton," installed in the most expensive Edison machines, was a powerful triple-spring design.

Let's pause here. The next article in this series will delve into some particular phonograph models that collectors are likely to encounter today.