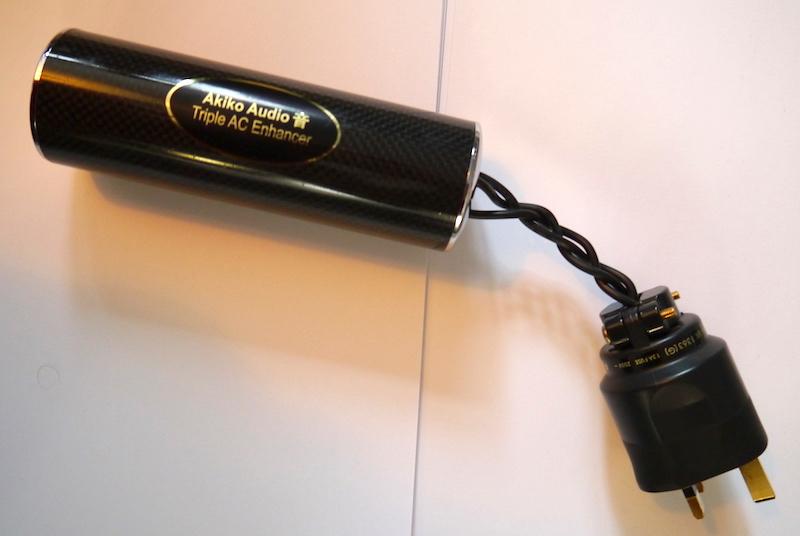 Back in November 2013 I reviewed the Akiko Audio tuning sticks, since then Akiko have been busy developing some additional products based on the same philosophy.
What we have here is an AC tuning stick on steroids. This new version has three seaparate compartments containing new active materials assembled into a very neat carbon fibre tube. The three compartments are connected with separate wires to the earth connection of the mains plug, a very fine Furutech FI-UK.
The pins on the plug are treated with SilClear contact enhancer.

The Triple Enhancer should be plugged in along side the rest of the audio system, either into a wall socket or power strip where the system is powered.

Initially I setup a separate headphone based system for evaluating the impact of the triple enhancer, I wanted to see the impact on a system without any other mains improvement technology.

The system consisted of a Gigabyte Brix PC running Audiophile Linux v3.0 as the source, the DAC is the Maveric Audio D2 modified with the Burson Supreme Sound discrete op-amps.

The regulators have also been changed from the regular LM7815/7915 types to discrete, higher performance types from Fidelity Audio.

The DAC feeds a Burson Audio Lycan headphone amplifier, a most unusual open frame design that allows the user to experiment with different op-amps. This one came with the latest generation of discrete op-amp.

The musical selection is controlled using the MPad application on on Ipad and the headphones are Demand Better Audio Headlite HPA, a super set of Grado based headphones that are most comfortable to wear and sound so good.

This setup is all powered via a regular power strip into which the Akiko Triple Enhancer is also plugged.

I listened to the system for several hours before adding the Akiko device, it is very quick to insert and remove the Triple Enhancer so easy to establish a before and after comparison.

If only audio was that simple, you plug something in and immediately notice an improvement! In my experience you can change your audio setup and there is a difference but it takes a while to evaluate and decide if it better.

In the case of the Akiko Triple Enhancer it was hard to immediately tell there was a change. Akiko also say you must leave the tuning sticks in place for a considerable time before the impact becomes audiable.

At this point I am sure the scheptics will be saying this is all woofle dust and magic if you cannot tell an immediate difference.

Devices like the Akiko Triple Enhancer are never going to dramatically change the sound as you expect when changing a main component like the speakers or amplifier.

The impact is more subtle, the tonal balance is not changed, you hear more of the texture of the music, deeper into the sound stage, a more relaxed sound.

Listening to the Mark Islam album "Blue Sun" the saxophone has a more natural breathy quality as does the trumpet, the musical performance is more enjoyable.

Turning to one of my favourite female artists, Mary Black and her album "Collected" from what seems a long time ago, 1982.

After listening to the Akiko Triple Enhancer in the headphone system I turned to my regular setup with speakers. This system has a DC blocking mains lead feeding a Lampizator Silk filter to provide as high a quality mains supply as possible. I was not expecting the impact of the Enhancer to be as obvious as the earth should be cleaner and so having less influence on the sound. The Silk has four independent outputs, each is separately filtered to help prevent the audio components interacting with each other.

The power amplifier is plugged into one output, the DAC another with the Enhancer in a third, the pre-amp does not need any power as it is an MFA Classic transformer based and purely passive.

Even with this optimised setup the Triple Enhancer managed to add some magic. As with the headphone system the soundstage opened out revealing more detail and three dimentionality. The vocals from Mary Black revealed her breathing more clearly with a quieter background.

Another of my favourite female vocalists is Diana Krall and the same effect was apparent, quieter backgrounds and cleaner, more transparent vocals.

Please do not email me and complain unless you have tried the Akiko products. I am sure I will upset some folk as I like the triple enhancer, in my system it largely does what Akiko claim.
The only claim I would argue with is that the effect is not subtle, in my systems you could plug in and remove the Triple Enhancer and there was no immediately obvious change, it was over time you heard a difference.

I find you can plug in a system and it will give you 80% of the capability immediately. Over time you tweak the setup, move the speakers a little, change some of the cabling and the sound improves.

The Akiko Triple Enhancer is one of those tweaks to your system that will move you towards achieving the best sound possible. I will be keeping the Triple Enhancer as I like the way my system now sounds.

Akiko offer a 14 day money back guarantee so give them a go. I hope, like me, you gain further enjoyment from your system.


While listening to the Akiko Triple Enhancer I noticed Akiko had launched a USB Tuning Stick at €129 so I purchased one. This device plugs into a spare USB in the source PC/MAC.
I fitted it to both the headphone setup and the regular system in one of the spare PC USB ports. Akiko suggest you can also add them to a NAS drive or DAC.
The none believers, will of course, shout rubbish, I suggest before committing their opinion to to email or some over opinionated forum they give the USB tuning stick a go.
The USB Stick does help to push your system towards it's full capability. The digital sound is cleaner and more relaxed, edging the digital system closer to and analogue sound.