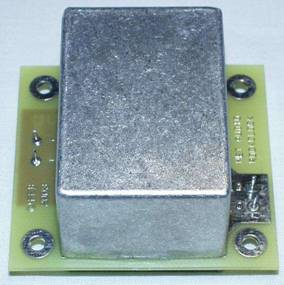 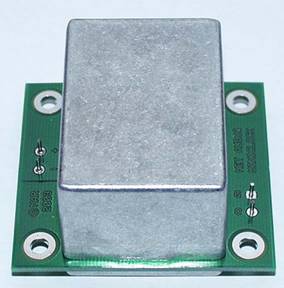 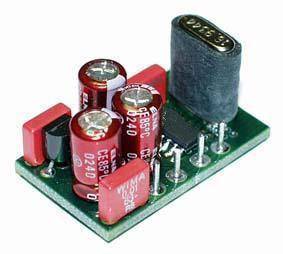 NET Audio is a company devoted to the fight for a good digital sound and against jitter. The products are essentially high quality clocks and other devices for tweaking CD players. David Pritchard, the owner and technical director, has sent us a complete set of their clocks for a review.

These devices are designed to substitute a CD Player master clock; in practice, normally it is necessary to dismantle the original clock components (typically a crystal with two small capacitors) present on the player board and connect at its place the output of the new clock.

The operation is usually not difficult, but requires some electronic knowledge, at least as far as recognizing the crystal case and the clock topology is concerned. Just to override these issue, a few specific mounting instructions for some well known CD Player are present in the Net Audio site. Many more are however available on other clock producers sites on the web.

OK, OK, the look is not important at all for units that must be enclosed inside the CD player cabinet. But you see, just looking at an electronic device can give a lot of information about it...

Net audio clocks are solid devices mounted on a high quality boards. The boards are double side, with metallized vias and insulated surface. In the case of Rock- and MiniClocks, all the circuit is enclosed in a very robust cast metal (iron?) box, mounted part on one side and part on the other side of the board, so that all components are enclosed.

In this way, the circuit is perfectly isolated from the outside world, which grants not only a good protection of the clock from external EMI (ElectroMagnetic Interference) but also the other way round. This is not less important: I have an open uncased clock that irradiates so much RF power to cause measurable effects up to a few inches apart...

MicroClock is instead mounted on a very small card, that should fit absolutely in any player, and is so small that can be normally mounted directly over the board. Microclock components are rather high quality: for example Wima capacitors are used.
It also has an on-board voltage regulator, which makes it less sensitive to the power supply: in this way it is possible to connect it to the dirty internal power lines of the player without too negative effects.

The tiny board is rectangular, and I would have preferred to find the clock outputs on the short side as in this way it would have been easier to mount it directly in place of the crystal: The difference is that you just need two wire sections 1.5cm long instead of 0.5 cm to connect it to the board. However, you will better try giving the clock some further support, as the electrical connections, are a little too long to grant mechanical stability by themselves: the clock is completely unprotected, and dangling around could in facts cause very dangerous short circuits.

The CD Clock power supply is a non-regulated low voltage power supply. It is constituted by a small transformer to convert 230V into approximately 12V peak, a discrete components rectifier bridge made of soft recovery diodes and a set of high quality filter capacitors, essentially Elna and Wima. The board is single side, but there are many very small SMD components mounted on the lower side of the board. The filtering circuit is completely passive, but rather complicated.

All the connections here (both the 230V and the low voltage ones) make use of screw terminals.

I will not enter further technical aspects, as I have been specifically required to avoid presenting images of the circuits or discussing such details by NET audio.

We have spent a lot of time in taking measures of these clocks, plus another couple I already had as reference. These references are two well known commercial clocks for CD tweaking.

Given our limited lab instrumentation, we have mainly focused in getting visually significant measures, more than precise clock jitter values.

Apparently, the most significant visual measures can be obtained in the most simple and direct way, that is measuring the clock spectrum with a spectrum analyzer.

My oscilloscope/spectrum analyzer has a limited sample rate and number of fft points, so had to take my spectrum analyzer to the limit (and possibly over...). An article describing details of these techniques is on the way.

The spectra have been gathered with the clocks in a stand-alone setup, powered by their own power supply unit (PSU) and loaded with 100ohm resistor in series with a 47pF cap placed at the end of a 10cm twisted couple from a UTP Cat.5 cable. The load was in parallel with the 100pF/1M spectrum analyzer input impedance. Note that all clocks, but especially the RockClock, proved rather sensitive to the load: the selected one seemed reasonable.

In particular, the three Net Audio clocks were powered by the CD Clock Power Supply, unless otherwise noted.

All clocks had been running for at least 45 minutes before measuring, in order to reach an acceptable level of thermal stability.

As you'll see, all spectra are centered in the diagrams with all the central spikes superimposed. This has been done in order to make comparison easier. In facts, the clocks proved to have slightly different central frequencies, as expected. Even though the differences where only of the order of 10ppm, definitely small and pratically irrelevant, it proved more than enough to screw up detailed spectrum diagrams.

Random phase noise, that is random jitter, is here represented essentially by a risen noise floor, an increased width of the main spike and the presence of "skirts" around it. The other spikes, especially the ones a few KHz off the center spike, could well represent non-random jitter, but might also be analyzer artifacts, essentially alias of higher clock harmonics.

These first set of measures should already give a precise idea of which is the absolute level of the clocks.

The Mini and Rock clocks sport the lowest noise floor of the group. Unfortunately, they seem to have also some kind of problem: the skirt is wider than the competitors and also than the MicroClock ones. On the contrary, the MicroClock appears perfectly in line with, if not better then, the performance of the references regarding the spike width, but the risen noise floor shows shows a higher random noise.

So, have we got everything we need? Not at all. There is something strange, here, that requires further investigation.

In facts, look at this close-in of the spectra above. It is clear that the width of the skirts above was essentially caused by the reduced resolution of the analyzer: here the RockClock still has some skirt, but is at a very low level; moreover both the RockClock and the MiniClock sport a central spike that is definitely thinner than the others, which should mean that their phase noise is lower. So?

If you go back to the second spectra diagram (+-1KHz), it is clear that most of RockClock problems are caused by PSU related jitter (the absolute level of PSU harmonics in the spectrum - not displayed - is so low, that these spikes cannot be caused by any kind of intermodulation).

This is the comparison of the spectra of the Mini and RockClock with the regulated power supply vs. the previous measures for the other clocks.

As you see, now both RockClock and MiniClock show a far better behaviour: the central spike is thinner then the others, the PSU related line are almost invisible and in any case far lower then the others, in general the noise floor is better than competition.

It could be the case of ascertaining if the two spikes on the right are really alias of higher harmonics, as I assume, or other jitter problems; however, jitter should cause symmetric spikes, and here the spikes on the other side are far smaller; moreover, they do not appear at all on the output spectra.