Another set of interesting jitter measures can be obtained by gathering the audio spectrum at the output of an unit while playing a 11.025KHz sinusoidal tone at -3dB with the LSB toggling every 192 samples. 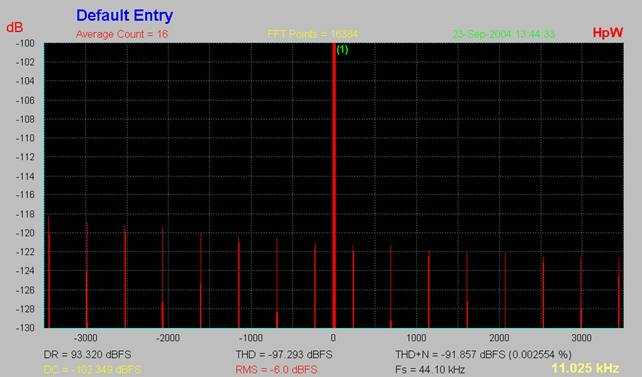 This is the very low level (see the dB scale on the left referred to the central tone) signature of the original signal, a line at the fundamental with very low level spikes at 229.65...Hz odd harmonics at the sides. Jitter adds extra symmetrical side lines at the two side of the fundamental, or lengthen existing ones.

This is the final test of jitter effects, that is what really happens to the digital signal because of all conversion processes inside a CD Player. Note that the clock makes a significant difference, but, as you'll see, the spectrum signature is mainly defined by the player, a Pioneer PD-S 505 "Stable Platter" unit.

In principle, the clocks and PSU were installed in the same positions. The PSU power input was connected to the internal power supply posts, and its low voltage output was connected to the clock with a short length of twisted couple from a UTP Cat.5 cable. The clocks outputs were connected to two stout pins I had mounted on the player board in place of the original crystal using a 10cm length of twisted couple from a UTP Cat.5 cable, without adding any further termination (as suggested by the instructions). Only exception, the MicroClock was mounted over the player board and directly connected to the pins, as this would be the most probable setup for such a small element. All clocks were powered by their own PSU.

From this kind of spectra is also possible to calculate the total jitter. As said above, this is the full CD player jitter, and NOT the clock jitter, so it is only loosely related also to the clock behaviour. These are the values I found: I made several measures to check and smooth out the results, so I report the average, the minimum and maximum values measured, in order to give also an indication of the spreading.

A few notes. First of all, just to be very clear, the real clock jitter is far less, probably between 2 and 50 ps for all the clocks. How significant are the figures above, then? I would say not so much, especially given the low class of the player, as an absolute level.

However, most of the jitter shown here is PSU related (50Hz or higher harmonics) or data related (229.65...Hz or higher harmonics) and so this can give some more information on how much each clock and its PSU can be influenced by external factors. Note also that here the clocks were driven by their own PSU, so the not exceptional performance of Mini and RockClock can be easily explained. Note instead the outstanding result of the MicroClock, which sports the best overall performance!

And yet... I do not think to violate Net Audio request if I say, without any further detail, that the quality of on-board power supplies of Miniclock and RockClock cannot for sure be considered lesser than the Microclock one.

And then, which is the explanation for this... hypersensitivity of the clocks to mains harmonics? This is for sure no easy to answer question, but we thought it was not correct to leave it open.

In order to gather some more information about these clocks, we have chosen to address the most refined and complicated technique available for phase noise evaluation.

In practice this consists in using an RF (radio-frequency) mixer in order to mix the clock under test with a second reference clock which should in principle be absolutely stable and have a very low phase noise. If the second clock has exactly the same frequency of the clock under test, the low frequency mixed signal is the phase noise. For the sake of precision, it represents the sum of the phase noises of the two clocks, but a spectral analysis of such a signal for different clocks using the same reference clock can give reliable qualitative information.

Here too, each clock has been connected outside the CD player and has been powered through its own power supply. The measurements were taken after 45 minutes after powering up the clock under test, while the reference clock was left on continuously for hours.

The parameters to evaluate here too are the width of the skirt, the height of the noise floor and the presence of spikes. The graphs are the average of 8 acquisitions of 262K points at 96KSps, for a total acquisition time of about 20 seconds.

As you can see, the results are really interesting. The RockClock is the less noisy of the set, while the MiniClock is affected by some more spikes, but is still better than the other reference clocks. Note, in particular, that the RockClock and MiniClock skirts are definitely thinner than the competitors'. The Microclock, on the other hand, finally shows clearly its limits, as expected, given the far simpler structure and the reduced price.

The results seem hardly compatible with the data previously gathered. As a matter of fact, there is a rather important aspect to clarify. The measure set up is rather complicated, because it is composed by a variable oscillator and a mixer, apart from the clock under test. In order to thoroughly avoid any kind of ground loop and any direct input of low frequency noise from the oscillator, both clocks are inductively coupled to the mixer, that is they are coupled through RF transformers (small ferrite toroidal cores with a few enamelled solid core copper wire loops as primary and the same number of loops as secondary).

Hence, at least in appearance, the problem detected in the previous tests is not connected to the power supply regulation quality, but probably to some kind of coupling, loop or other undesirable behaviour whose effect completely disappears when the clock output is not DC connected to the system clock input.

Back to Part I | Fast Forward to Part III