A mat for CD's 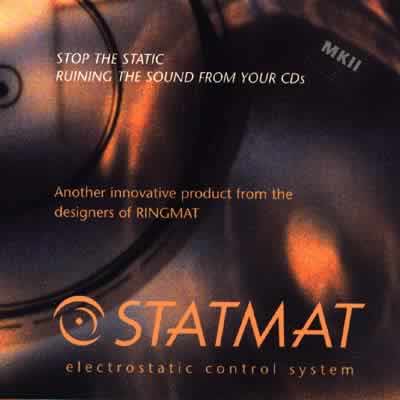 In the world of Hi-Fi tweaks 20 quid is a very small sum. What you get for your money is a thin CD sized film with a geometric pattern printed on it. If it wasn't for the undeniable success of the same firm's Ringmat, tested a couple of months ago, I'd have been inclined to dismiss this as another way of getting small change out of us.

So first the theory...

With all tweaks there is some pseudo scientific garbage at best, simple Zen philosophy at worse, and many rely on the placebo effect - "I've spent money so it must be better" - for their effectiveness.
Here the Statmat appears to have at least some scientific validity. The reasoning is fairly simple. Inside a CD player you have a chunk of polycarbonate spinning at high speed in a warm dry atmosphere. The result is a not unsurprising build up of static electricity. Ringmat Development's contention is that this build up is not even but results in *hot spots*.
This much I think sounds pretty logical. The next bit is more tricky in that these *hot spots* are supposed to interfere with the recovery of phase information from the disc. I don't pretend to understand this, though certainly I can see that the plastic laser lens might find tracking the hot spots tricky.
To cure this the Statmat is not just a simple plastic film, the geometric pattern is conductive, the idea being that this disc redistributes the static charge to eliminate the *hot spots*.

Using the Statmat is very simple, you just lay the film on top of the CD in the player draw. In my case the Micromega Solo is even easier as the film just goes onto the CD before the clamp.

The first time I used this I had a good friend with me who is also a Hi-Fi nut and along with my wife we first listened to a track, then ditifully repeated the process with the Statmat in place. The result was startling, all of us were quite taken aback at the improvement.
The music became more open, as if the noise floor had been lowered. The imaging improved and there was far more air and atmosphere. At the end of the track I leapt up and removed the film and we listened again - no difference! And here we come to the biggest problem in reviewing this product - it does have an effect, but that effect remains after the film is removed!
Simple A/B comparisons were impossible, as the Statmat made a difference only once - when first used... I can only think that the redistribution of the *hot spots* remains for some time after the film has been removed.
However for me there is no doubt that the improvement it makes is of the magnitude that I (and my companions) would be happy to identify *blind*, if a *blind test* were possible.

As with the same companies Ringmat I find myself giving this bit of tweakery a wholehearted recommendation despite my scepticism in the beginning. At a mere 20 pounds it is cheap enough to experiment with, but I can't see many people going back to not using it.
The only downside with the Statmat is that it is a bit of a fiddle to use for those made lazy by the ease of use of CD players - turntable owners will have no qualms...
In my case I found a little labour saving idea applicable only to those lucky types with a top loading player using a full width clamp like my own Solo.
I laid the film face down on a sheet of paper and sprayed the back with some of that glue used to mount photographs. I then pressed the clamp onto the film, picked it up and presto! I had a clamp with a permanent Statmat attached.

Worth a try then, and please, as always E-mail your own experiences...