A tale of three (phono) stages 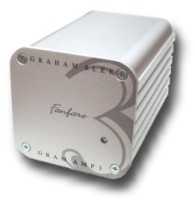 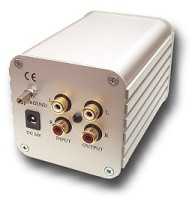 The Graham Slee Fanfare is a dedicated Moving Coil RIAA phono stage. Contrary to the more common practice of making switchable MM/MC stages, Graham Slee has always had a very strong opinion against phono stages being built to provide more than one level of gain, and generally have recommended using a step-up transformer to load a MC cartridge into a MM phono stage. The Fanfare is their first forray into a MC stage, but still true to their original philosophy this device only has one gain setting (61.5db), and is not suited to accomodate MM cartridges (more specifically anything with an output greater than 4.4mV).

The Parasound Zphono is an op-amp based unit that is designed to be used with MM and MC cartridges. Significant to note is the commendable 10 year parts and 5 years labour warranty.

The Cambridge Audio 640P is also designed to be used with MM and MC cartridges, and includes a subsonic filter. It features single-ended 'Class A' gain stages and discrete transistors.

In general, the differences were quite small. A magnitude I would roughly characterize as a bit greater than what you would expect to find between digital gear, but smaller than differences between loudspeakers.

The one difference that is not small at all is that of background noise; (at a medium-high volume setting and no signal) the noise from the Parasound was 4-5db greater than the Graham Slee, which in turn was only 2-3 db higher than the Cambridge Audio unit. Ironically, the Parasound is the only unit in this review that has a AC polarity switch to help eliminate hum but yet has the worst result in that aspect; the switch made no noticable difference. The ~7db difference in noise between the Parasound and the Cambridge Audio unit made an unavoidably noticable impact when listening to music, especially on quieter passages.

"Tea in the Sahara" (The Police; Synchronicity; A&M SP-3735)
Compared to the Parasound, the Graham Slee eaked out just an ounce more of depth and slam on the electric bass, but in absolute terms the differences were very small indeed.

"Still crazy after all these years" (Paul Simon; Greatest Hits; Columbia; JC35032;)
In direct comparison the Parasound sounded a bit weak and thin on vocals, whereas the Graham Slee's presentation was considerably richer and fuller.

"All blues" (Miles Davis; Kind of blue; Columbia; wpc-3163)
I use this track to dissect the HF and LF regions, as represented by the piano and the double-bass respectively. I'd have to call the comparitive performances a photo finish at lower volumes, at higher ones the Graham Slee had a slightly leaner presentation with a slight bent towards the HF region while the Cambridge Audio seemed to have a bit more depth in the nether regions and a slightly warmer presentaion in the treble. I wouldn't prefer one over the other at this point.

The Parasound was obviously noisier and also a bit lesser in detail at either end of the spectrum, when compared to the Cambridge Audio unit.

"Rag Hemant" (Ali Akbar Khan; Indian Architexture; Water Lily Acoustics; WLA-ES-30)
I use this track to examine the upper mid-range and treble regions, represented by the tanpura and the sarod respectively. Again, comparisons of the Cambridge Audio and the Graham Slee were within a hair of each other. At times the Graham Slee seemed more detailed and open in presentation, with better dynamics and seperation between instruments and notes, and at times it was the Cambridge Audio. At this point I have to throw out any conclusions I thought I may have arrived at, especially since I am doing this in realistic (i.e. less than laboratory) conditions. I will have to call it a draw between the two units.

Consistent with the findings on the previous track, the Cambridge Audio unit had a lot less noise and a fair amount more detail in the upper-mid and high frequencies, in comparison to the Parasound. The Cambridge Audio also had a more open-sounding presentation than the Parasound, allowing a better seperation of each unit of sound.

"One way out" (Sonny Boy Williamson; The Real Folk Blues; MCA-Chess; CH-9272)
At higher volumes the differences between the two amps were a bit more apparent, the Graham Slee seemed a bit more detailed in the mid to highs and the Cambridge Audio seemed to emphasize a bit more on the bottom end. The net effect was that the at moments the Graham Slee seemed a bit more open and cleaner (and preferable to me). Also at high levels the Graham Slee did seem to handle transients with a bit more grace than the Cambridge Audio. But again, my attempts at matching output levels is not beyond reproach and when results are this close I have to call it a draw. Differences between the Parasound and Cambridge Audio units were not easily discernible on this track at lower volume levels.

I intially tested the three units via the Cayin integrated and Dynaudio monitors and was not satisfied with not being able to hear differences reliably between the Graham Slee and Cambridge Audio units. I next repeated the tests feeding the Cayin into the Practial Devices/Sennheiser headphone combo, same results. I finally resorted to driving the headphone rig directly from the phono stages and bypassing the Cayin, again the same results. There may indeed be a performance difference between the Graham Slee and the Cambridge Audio units - but it would take some degree and combination of better ears, testing protocol and playback gear to discern that. I am satisfied for all practical intents and purposes that the differences were null.

Although it comes with the best warranty and the lowest price point, I cannot recommend the Parasound unit due to the high level of background noise and relative performance. Especially with the Cambridge Audio being in the same price neighbourhood and performing significantly better.