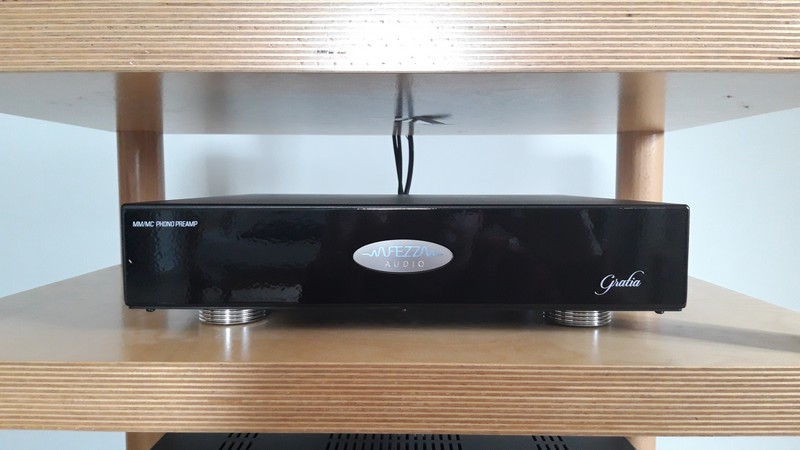 It never ceases to amaze me that for a format that had been declared dead in the 80s how many products there are for those of us who obstinately wish to continue with analogue audio. It's even more amazing that most of the products are very good. As an example I have 5 phono stages at home at the moment varying from around 300 to 1500€ and I could quite happily live with any of them. Yes, certain system requirements imply certain stages but from a purely listening point of view I believe we've never had it so good.

The latest arrival is the Fezz Audio Gratia. I'd heard of Fezz Audio and their penchant for tube amps so I was initially disappointed to find out the Gratia is a solid state device. However the old adage of it's not what you do but how you do it can often hold true in many domains and the fact that Fezz is running the Burson Op amps, a version of which was very favourably received by Mike in 2014, indicates that they mean business with the unit. This is further reinforced with solid build and some very nice socketry round the back. The Gratia is capable of running with both MM and MC cartridges with separate inputs for both. These are selected round the back along with gain and subsonic filter. The reviewer in me could complain that these would be better round the front but in reality they're set and forget and as I live with a CEC PH53 and a load of DIP switches I'm not really in a creditable position to...

The front panel looks like acrylic (but may in fact not be) and has a classy Fezz Audio logo that lights up when the unit is on (whether this adds or subtracts to the WAF I don't know but it will be harder to sneak one in unnoticed). The power switch is hidden on the side but again - this is a set and forget as the unit is meant to be switched on all the time. The version I have here is the black one but it's also available in white, red or burgundy to match the rest of the Fezz Audio range

Cartridge wise the Fezz will work with the usual MMs with a 47k load and according to the specs with MCs that need between 50 and 1000 ohms. I ran an Audio Note IQ3 for MM and a Reson Etile for MC (which expects a 100 ohm load). These were respectively mounted in the AN TT2 Deluxe and Linn Axis Turntables. Amp wise I started with my Canary 608LV but the slight hum present on MM became unbearable on MC. I spoke to Fezz Audio about this and they suggested an earthing problem. I'm not going to print their suggested solution as I think it's dangerous but it did prompt me to switch amps to an AN Oto SE for the rest of the listening. Now not everyone can do this so I'd more than is usual recommend trying before buying in this case. Speaker wise I ran either the LV IBX-RW3s or AN J Spes. Up for comparative purposes were the GSP Audio Accession and my own personal CEC PH53. 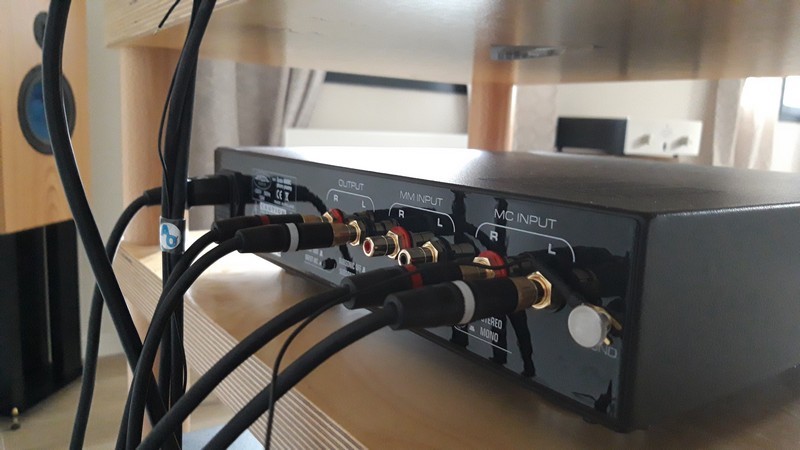 I started off briefly with Audio Note turntable and the IQ3 with the Gratia in MM mode and ran it against the GSP and it gave a very good account of itself. It doesn't quite have the wonderful precision of the GSP. The more expensive MM only stage has it slightly beaten on detail retrieval (which is still very good as we'll see below) and authority. But as it costs 50% more you would expect it to.

Moving to the Linn Axis/Reson Etile MC combo, I plugged in my CEC PH53 for the second round of tests - a similar character resulted as with the MM (logical as there's just an extra gain stage for MC added to the circuit) so the musical examples below relate to this round. Before getting to that though I can report very low noise levels even on high gain settings with no hum once the amp compatibility issue I mentioned above was sorted. So on with the tests. I cued up a set of remixes I have of Madonna's Love Profusion. In all of the mixes the Gratia put in a powerful performance but without the nimble qualities I admire in the CEC. The Gratia concentrates on the sound of the instruments and performers whereas the CEC will probably tell you more about how they're being played themselves. The Fezz Audio will surprise you when the bass kicks in but the CEC will have your foot tapping throughout the entire track. Similar characteristics were noted during Pink Floyd's The Divison Bell. The Gratia will tell you a lot about Dave Gilmour's voice and picks up better the synth noises and sound effects in the mix at the expense of a little suppleness and flow.

I then dug out Zappa's Sheikh Yerbouti as this is often a good test for anything. Here things got interesting and whilst the Gratia continued with its detail and bass depth the CEC fought back with better projection of instruments in space and overall drive and projection. Again the Gratia sorts out the complex mix better but the CEC manages to give a better impression of voices from the background being really further back and not just what the recording engineer wanted.

I finished off with Who's Next to confirm my impressions. The Gratia started out with superb separation on the opening synth parts to Baba O'Reilly. The CEC then fought back with a more human quality to the guitars. Don't get me wrong - the Gratia isn't bad at this type of thing. It's just the CEC is better and it's one of the reasons I love it. It also made more sense of Keith Moon's rather bombastic drumming although I'd say the Gratia won the realism of the drums contest.

As a closing experiment I also ran the Gratia with the AN Io 1 MC with AN step up. This was interesting in that I'd been previously running the Audio Note Zero Phono previously with this combination - which is a great setup and my current favourite of the stages I have at home. The Gratia didn't leave me feeling I was missing out on much. I admit I wasn't doing any critical listening at this point - I was just enjoying what the system did  - always a good sign.

As a parting thought I read Mike's review of the Burson op amps and the richness of tone he describes is pretty spot on description wise for the Gratia. Now this may be coincidence and 6 years later we're a few generations further down the evolutionary path of these devices but the Gratia could certainly never be accused of sounding thin. I guess this could also be due to the usual occupation of its designers with valve amps. It certainly indicates that these devices work and work well.

This hasn't been the easiest review as this is a) a very good stage and b) one that is better in certain respects than my habitual reference for less money but isn't universally better. Ideally I'd like to combine the strength of both my reference CEC and the Gratia and then I could say buy it unreservedly! Unfortunately life isn't like that so I'm going to have to proffer an opinion so here goes. For those of you who favour detail and instrumental tone above projection and flow this is a tempting proposition. It's very well built and I think it is certainly worth every penny of the very reasonable 625€ Fezz Audio wants for it. If foot tapping is your thing I'd probably suggest something else and I'm sure there's something to fit the bill in these very pages. Otherwise (subject to checking the amp compatibility I mentioned earlier) it could very well fill many people's phono stage requirements for some time due to the possibilities of running a large variety of cartridges and a highly creditable overall performance.