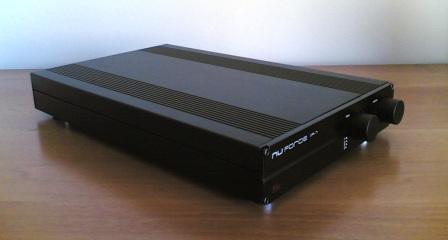 NuForce product range includes a few of the best sounding "class D" or non-conventional amplifiers in the most recent years.

TNT Readers already met their Reference 9 power monoblocks, monsters that pack more than 1kW output peak power in a half size low profile case and sport a terribly detailed, transparent, almost dynamically ferocious and yet musical sound. Their products include also the Reference 8.5 power amp (same circuits of the Ref 8, which they have substituted, in the Ref 9 box), with a somewhat less aggressive but extremely musical sound, the 9SE amp (review pending), the P-8 and P-9 preamplifier (review pending too).

In the US it is sold bundled with the OPPO DV-970HD, which is not available in Europe as it is not CE certified.

The chassis structure is very similar to the Ref 9 one, departing obviously for the front and back panel. The chassis is available in black, silver or gold anodized aluminum with sandblast finish.

The front panel maintains the deep horizontal line so typical of all the power amps of the range. Here, however, a few very small leds and two knobs are present on the right side. By the way, each unit comes with three sets of knobs, one in each of the available chassis finishes, so that the owner can choose the preferred colour combination and modify it any time.

The unit controls are very simple. They are completely microprocessor controlled: the knobs are free running, evidently connected to digital encoders. 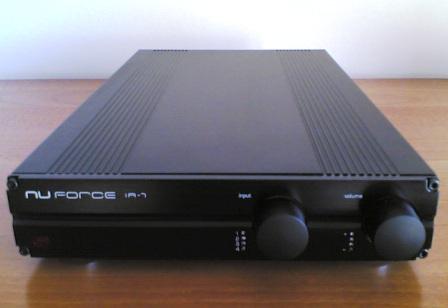 The left knob is the input selector. The units has four inputs. The selected one is identified by one of the small leds on the left side of the knob. The knob has also the function of stand-by switch: you have just to push it.

The right knob is the volume control, completely digital, ranging from +30 to -70dB in 0.5dB steps. The step size is quite fine, but this allows for a very accurate level regulation in any condition. The leds on the left of this knobs give a very rough, 4 step indication of the level, and also an end of range warning because in this condition they start flashing.

On the quite crowded back panel from the left you can find four RCA sockets corresponding to inputs 1 and 2; then two 3.5mm stereo input jacks, implementing inputs 3 and 4; then other two RCA sockets, implementing the pre-amplifier line output. It is therefore possible to use this unit as a pre-amplifier or for bi-amping by driving two additional external power amps, or also as a pre-amplifier, switching off the power amp via the booster switch, next on the panel.

Then there are the four high quality, large size, completely protected and isolated power output posts, that can receive bananas from the back and from the top. The protection here is welcome, as the room between the knobs is very reduced, and an improper action could easily cause an unwanted short circuit, in case of naked posts.

After this you can find the power switch and the IEC power cord connector.

The remote is apparently built on specs. It has a very limited number of buttons, so it is easy enough to use. 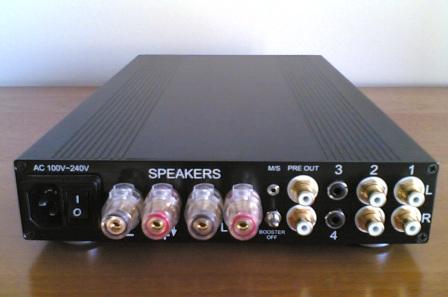 The information about the unit are rather scarce. As far as I know, it seems that the unit has been obtained combining Ref 9 amplification circuits with a scaled down P-8 preamplifier and a single 8 series switching power supply with big reservoir capacitors like in ref 9.

The result is a very high quality unit with a somewhat limited power pack.

Also general information about technology is not so available. The unit is based on an advanced approach that, based, as all the Class D products, on the fact that an audio signal can modulate a power oscillator, departs from the classic PWM (pulse width modulation) approach because it does not make use of a fixed frequency oscillator, nor of a saw-tooth waveform. It is therefore called Analog Switching Amplifier.

With respect to most amplifiers, NuForce technology has some specific difference: it provides an extremely low output impedance (damping factor of 4000!!), a very extended frequency response (up to 100KHz), and an extremely low distortion.

The boards are stuffed with many SMD and few through-hole components. The packing however is not so "crowded" as we are now used in digital components, which might indicate some attention in trying to keep some level of components isolation. The boards show, in any case, a highly complex circuit.

Looking at the published data, the high frequencies are very extended (-3dB at 100kHz) but the power bandwidth appears somewhat limited at low frequencies, with a -0.9db at 20Hz. Distortion is quite low at any power.

In the review sample, the volume control is slow, both with manual control and via remote.

The position of the buttons and their labels on the remote, IMHO, are not optimal. I would have preferred the volume buttons in a separate area, with the usual > and ± markings. Instead these are with all the other buttons and simply labelled UP and DOWN.

When switched off, the unit causes a thump to be emitted from the loudspeakers, in any case with no sort of consequence or risk. Note however that adding a relay to an output with an output impedance in the order of milliohms would be a sacrilege, it's far better keeping the "bump"...

In some circumstances, the units seems to emit a very very subtle whistle. The fact does not cause any real problem, not even in near field listening (that is, with the listening point at 3' - less then 1 meter - from the loudspeakers, configuration I use in one of my systems). To be honest, probably I would not have even noted the point, had I not been warned about it in advance.

The unit requires a not so short break-in, before showing the best performances. During break-in, the amplifier gets less aggressive, more educated, polite, while bass increases.

The final sound is clearly in the NuForce league. It is definitely not euphonic in the traditional (audiophile) sense, but very transparent, clear, fast, neutral, perhaps with an hint of cold that in any case causes no prejudice to musicality.

The highs are very extended, crisp, brilliant but also absolutely smooth and never edgy or harsh.

Low frequencies are very tight, precise and go very deep. The sense of rhythm and pace are good.

The sound is very musical and natural: the IA-7 has a very good sense of rhythm and pace essentially because it is so fast and transparent.

The sound stage is wide, detailed, precise. Depth and ambience are present as far as they are present in the recording. Nothing is added, and apparently nothing is subtracted with respect to what's on the disk: with an adequate source the support limits are easily made evident. You will discover that all those CDs you have do not sound all the same, but, as LPs, each of them has its own sound.

I spent some time comparing this IA-7 with the NuForce Ref 8 power amps. To some extent, the IA-7 is even less forgiving than the Ref 8: the fuller, if not slightly hypertrophic, bass of these last monoblocks helps a little in enhancing the rhythm and making the sound even more musical and involving, but for sure less detailed and precise.

With my large power-eating floorstanders, well known as a very difficult load not because of low impedance (in theory not less than 5-6ohm) but because of impedance phase rotations, the low frequencies seem even more articulated, but for sure a little recessed and shy. This effect - instead - does not show up with bookshelf 'speakers. Mid and high frequencies seem on the contrary in the same league as the 8 Ref ones.

Even with this difficult load, at normal (ok, high...) listening levels the IA-7 flies as high as the best amplifiers I have tested through the years, excluding Ref 8's. Cranking the volume knob up to levels that are hardly sustainable (for the listener), but for sure not acceptable (for the neighbours...) causes the sound to bloom and get far too warm, as happens with any normal amplifier of comparable power, with no symptom of "digital" distortion.

This integrated amplifier is outstandingly precise, detailed and transparent. It does not add anything to the sound, and scarcely hides anything at all. Also the preamplifier stage seems really very good, neutral, transparent, fast, precise and pinpointing. A perfect control, up to a point of shyness, in the bass region can also be very attractive where this section takes over an unnatural bloom due to bad interaction between loudspeakers and environment.

All these qualities would make any integrated amp interesting, at any price tag. With IA-7 price tag, things get just outstandingly interesting.

Do not make the mistake of underrating it. Used in a less than adequate system, it will give a very good result, but only with a rather high level system you will not risk to waste its potential and/or to have source defects made evident.

I strongly suggest that anyone interested in a medium (or also high) level integrated amp should give IA-7 a chance. It is no easy listening, NuForce are really in a new league by themselves, and getting acquainted with them requires an open mind and some serious amount of time.

However, I do not think you'll ever regret about spending your precious time this way.

Special thanks to Jason Lim of NuForce and Dimitri Toniolo of Mad For Music, NuForce Italian distributor, for the help and support.