OPPO, based in California, produce digital media devices. They are OEM for various customers, and also sell a few digital players with the OPPO brand.

Our review, as usual, is limited to CD playback, as today CD still seems the most used media, and if its position can be endangered, this is because of MP3 files, and for sure not because of DVD-A or SACD.

In spite of its ridiculous cost, compared with any HiEnd unit, the OPPO player has been presented in AV magazines as an outstanding value for the money and a giant killer; in particular NuForce have a review of these units on their web site with extremely positive words, and also sell them in bundle with some of their products (in USA: in Europe these players cannot be imported because not CE certified at present time).

On the other side, I invite you to keep always in mind the price tag... even though I am afraid I have been the first one to forget it, driven by all the hype I read.

The apparent unit height is even less than the effective one, due to the high hoof the unit has. The front panel in facts is extremely slim. The finish is good, for the price at least, even though a little more sparkling than I would like. 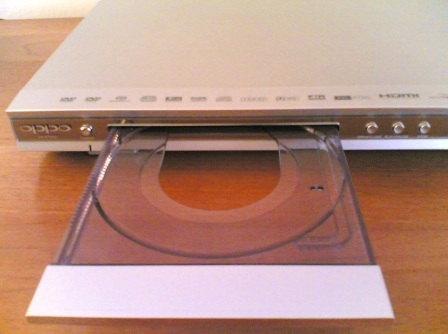 The front panel controls are very basic. From the left you can find a small chrome button implementing the standby switch, the very slim disk drawer, in transparent plastic (very nice) three more buttons for open/close, run/pause and stop; then there is the display, with a strange amber colour, and finally a small door, with a nice (apparently) magnetic closure system, which hides the flash memory card reader (compatible with Memory Stick, Secure Digital, Multi-Media Card, and SmartMedia) and USB sockets. 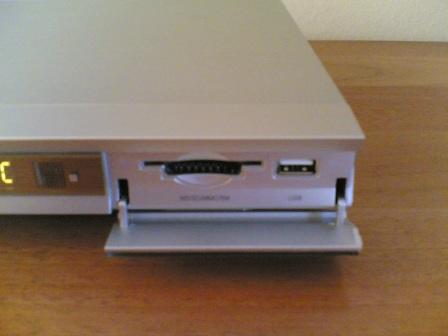 The back panel is much more dense. On the left there is a small asymmetric socket for the power chord, without ground connection. In the center there is a block of other sockets, including HDMI output, mixed, front, rear, center and subwoofer analog audio outputs, composite, s-video and RGB video outputs, electrical and optical digital audio (S/PDIF) outputs. 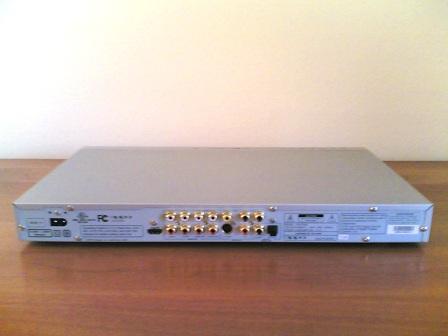 The remote has, as usual, a huge number of switches, but they are placed in a rather intuitive way, so that it is not too difficult to use it. The remote has a "Glow in the dark" keypad, that is, after being exposed to light, the keypad is luminescent in darkness. That's right, it looks like the ghost of a remote...

The various controls have sometimes non-standard behaviours. For example, to get to a full stop, you need to press the stop button twice. It is not so pleasant.

The disk drawer is very thin. You can close it by pushing, but I do not feel comfortable... even though the OPPO web site says "Special disc tray - thin, flexible and strong. Can tolerate some bending without breaking.".

The drawer completely encloses the disk, even on the sides. You need to put a finger under the drawer and lift the disk through the wide opening in the bottom of the drawer; doing so, however, you'll for sure leave your fingerprints on any CD/DVD you play, which is less than optimal, unless you get them by the center rim.... or you wear gloves...

The load time, even though shorter than on other multiplayers, for anyone used to CD players is simply infinite. It is really a pain not being able to insert a CD, close the drawer, press play and go to listen.

The power chord is extremely thin and has an asymmetric connector that is rather uncommon, at least in Europe, AFAIK.

I am used to having more buttons available on the front panel. I would have liked to have at least skip forward, back and repeat.

Given the good reviews it received, I tested the DV970-HD in my main system. For the best audio sound, Jason Lim of NuForce suggests to use the front channels with a specific set-up. In facts there is a small advantage with this choice.

The OPPO is supposed to be a champion of high resolution. In facts the unit shows a transparency and detail that could not even be imagined in any CD player of just few years ago. The sound is net, precise, fast, immediate.

Not that all CD players were especially dumb, in the past; however most of them had a very unpleasant tendency to scream, with acid and/or edgy top frequencies that were really a pain for the ears.

Now all of this has completely disappeared: high frequencies are very extended, detailed, fast, never edgy or acid. They could appear excessive, compared with older players. Instead they are plainly realistic, correct, as far as to become unpleasant when in a live session the portrayed instrument or voice would be such. There is no moderation, no taming, in this sense.

The sound stage is wide, detailed, rich, the position of the players is precise and realistic, depth is present as far as it is available in the recording.

Everything fine then, with this little monster? Well, for the price it would be exaggerated, wouldn't it?

Actually, when compared with my reference - the prototype of a new DIY DAC - the OPPO DV 970 sound seems a little weak in a few areas.

First of all, its pace and rhythm seem a little bit confused. While with the reference I find myself very involved in music, tapping with my foot or my hand, this hardly happens with the OPPO; sometimes the music seems a little "meaningless", without sense.

Second, the unit seems just a little too lightweight, nice, too educate, too polite. Sometimes I would prefer more body, heart, courage, push. There is no evident lack of dynamics, only it is tamed, emptied, never brutal even where the music should better be brutal. The sound is overpolished, lucid, with a strange and innatural light, which remembers me the Audio Nemesis DC-1 DAC.

Finally, some details seem more confused than with the reference: some sibilants, some thin rumors, some subtle detail, the sound of cymbals in the background seem just a little more jammed, less natural, precise, sophisticated, as though there was some grain, very thin but perceivable. As usual, the jamming is more evident in most complex musical plots.

Just to have a better positioning in current market scene, I decided to compare it with an up-to-date similar product, a very recent, entry level player, last son of an illustrious family, with an high audiophile reputation and double cost.

The OPPO DV 970 confirms to be too light, delicate, immaterial, less rhythmic and involving, even though in this area the competitor takes also advantage from the bloom of its bass, which is slightly predominant. In change, while this last shows some grain that smears the minutest detail, the OPPO is better in terms of refinement: its sound and its sound stage are far cleaner, more precise, levigated, detailed.

If you are interested, you can also read our measures and technical notes.

If you are looking for an absolute reference, OPPO is not your choice. I am very choosy, but all the hype you can read about it seems to me "a little exaggerated".

However, you must consider that, right because of all the hype and consequent expectations, it has been tested in a system whose value is at least 50 times the cost of this multiplayer, and whose components are champions in the price/performance game. It would be a very hard, if at all reasonable, test for any system; without such expectations, I suspect the review conclusions would have probably been rather different...

The naked truth is that the OPPO player, despite its far more refined and transparent sound with respect to direct competitors, shows big issues in terms of rhythm, body and verve when compared with products specifically oriented to audio.

This, together with the strange behaviour in the controls, seems to show that it has been thought, developed and optimized as a Home Thatre device, more than as an audio source. On the other side, its huge flexibility, in terms of number of different audio media supported, cannot be denied, and is a plus difficult to find in competitors.

To draw a bottom line, the DV970-HD cannot be considered a reference player, but still remains an interesting bargain.