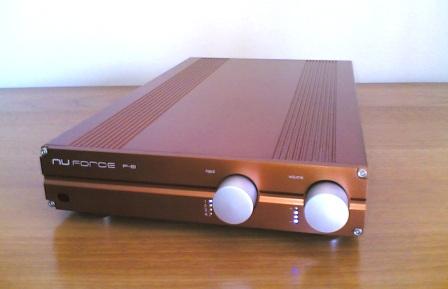 Indeed, NuForce is getting a lot of reviews on TNT. Too many? Perhaps it is really so, but in my view this company is proposing very good sounding units at prices that, in a sane market, would immediately redefine the whole market geography. Unfortunately, hi-fi addicts have the insane pulsion to buy, and hi-end (but also mid and low-end) companies have fully leveraged this aspect for years, building up their own images as sole icons of true hi-fi.

No surprise, then, if a new entry as NuForce, sponsoring a new technology as class D, has found some resistance in entering the market. And no surprise if yours truly pays so much attention to this new entry.

The P-8 has been the first NuForce preamplifier; it is not a very recent product, but its price tag makes it one of the few preamplifiers eligible for a mid priced system. So I was really interested in verifying the level of this unit, as not always power amplifier producers are able to achieve the same results with pre-amplifiers.

The unit makes use of the usual NuForce cabinet, low profile and half size. The colours available again are the usual ones, silver, black, gold and copper, to match the 9SE power amps. Three sets of knobs, in black, silver and gold color, are included with each unit.

The front panel is exactly the same as the IA-7 preamp, which is a further indication of the very high industrialization level reached by NuForce designs. Even the controls have the same functions: the left knob works both as a power switch (pressed) and as an input selector (when rotated); the right one has the functions of volume (when rotated) and muting (pressed) control. The usual small leds give some indications on the state of the controls. 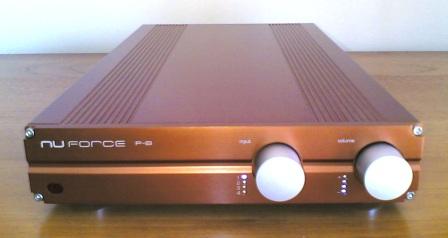 The back panel is, as usual, more crowded. The unit has three RCA inputs and one more input implemented as a 3mm stereo minijack. The output is double, balanced and unbalanced, and there is also a 3mm headphones output. A very complete set, I would say, even though I always prefer RCA inputs. 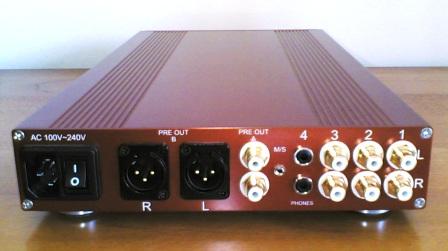 Operation is really straightforward, nothing strange or particular to flag.

The interior is in perfect order, highly professional, perhaps more efficient and cost effective than... cosmetically correct, as we see in other cases. But only sound matters, isn't it? 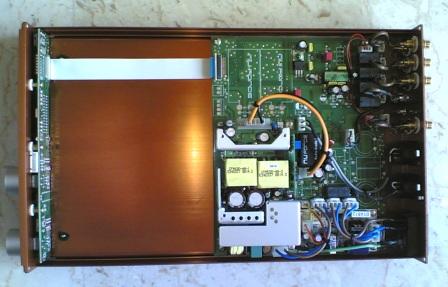 Well, no particular issues in operating the unit... even though all the notes about IA-7 integrated amp still hold true.

Contradictory? No. The fact is that most of the (very minor) operational problems I found at the time, do not appear any longer such after a while.

Note, by the way, that this unit is perfectly silent, no subtle whistle is ever to be heard. I was not able to cause any click nor thump to be heard through the speakers during any switching or muting/restoring operation; only, avoid (as usual) switching the preamp on from the rear power switch when the power amps are on (usual caveat).

Even this unit requires a rather long break-in, before showing the best performances. Initially, its sound is large, bloomed, the bass is longish and not so pleasant, the highs a little too aggressive. Break-in cures all these problems and presents the user with a rather different unit.

However, since the first listening the unit shows its league, and proves to be something perhaps not absolutely perfect, nor the best unit in the world (and at this price tag it would be really excessive to expect this) but really different from most of the competitors. In facts it really approximates the concept of "a wire with a gain" more than any reasonably priced unit I have ever listened to.

But let's start with the usual parameters. Once the unit has completed its break-in period, the bass is tight, but not small, controlled, but not thin, very fast but not in a hurry, detailed to the point of separately reproducing each wave crest, and still it maintains an almost physical effect. Something really difficult to find at this level, in any unit. The sound of cymbals, if correctly registered, is involving, full, very realistic, correct. The wrap up is a very full bass, with an impact perfectly perceivable in any circumstance.

Tonal balance is perfect: even though the huge transparency and the extension of the highs can make the unit appear to have a preference for high frequencies, even in the most complicated plots you can always recognize all instruments correctly portrayed in their tonal extension and colour, so that you must really recognize that each band is at the correct relative level, with no predominance at all.

The sound stage is rather wide, if not exceptional, and sufficiently deep. Each player, singer or instrument seems bolted to his own location, and often isolated from the others by a silent curtain. No curtain instead is present between the player and the listener, any small vibration is extracted and reproduced.

As already said, the unit is extremely fast and detailed, analytical. Quite often, you are able to listen to the single instrument in an orchestra, to the single player in a choir: something that really shows the excellent introspective capabilities of this unit.

Introspection: this is probably the keyword. Everything seems to be resolved in this terms. The presentation of the single instrument is precise, almost pedantic, each vibration seems to be separately handled and sent to the listener with the highest care. Even the environment echoes seem to be deconvoluted and associated to each player.

You might well expect that all this introspection might be connected to a cold and impersonal sound. Instead, what makes the unit even more interesting is the fact that all this detail does not make the unit cold or impersonal at all: it makes it essentially transparent. All the musicality which is encoded into the discs is conveyed to the listener together with all its detail, and the rhythm of the music is all there, pretty involving.

Well, as far as we know, we may have now the best audiophile unit in the world, you'll be thinking. And yes, perhaps you are not so wrong. But, in my view, that audiophile term in this case also describes the limits of this unit.

Which are its defects, then? Well, you have already read all (or most) of them, I must say.

In my view, the only absolute defect I found is that its sound, though not harsh at all, is however just a little less silky, smooth, refined and sweet then the best tube units. This is, IMHO, a matter of fact, and a fact that might well be expected, for such a price tag (I would say that what was not to be expected, instead, is the exceptional performance in other areas).

However, there are some more aspects that need to be addressed. We need to get down to the core of our business.

During the last Milano HiEnd, talking with a printed paper colleague (should I better say competitor??? there is a very special relation between these guys and TNT writers.... something that might require several large psychology books to discuss in detail ;-)))) he pointed out that in general NuForce sound is more detailed, precise, realistic than real live sound, which is obviously not correct.

In principle I can agree with this, but in practice this "absolute" statement has a very relevant flaw. We can only judge a system by playing a record, but actually, no one is normally able to know which was the original sound, even though sometimes you are informed about the pick-up technique used, and the placement of microphones. Even when you are present at the recording venue, the psychological and temporal distance between the event and the playback is normally such as to make the comparison scarcely significant. Moreover, most recordings, especially in the past, were mixed to give good results when played in the most popular playback systems, which for sure were not of very high quality.

So, it is far from surprising that when you play on a modern, very high resolution system a recording obtained with a multimicrophonic approach, that is placing a microphone a span away from each instrument or singer and then mixing down everything into two channels, the sound of the instruments is not the same as in a live show! Actually, each of them sounds as you would hear them if you were just a span away: no masking, no disturbs, no attenuation, no echo (if not artificially added...), lot of details that you would never hear a few meters away.

I must say that with Ref 8, Ref 9, Ref 9SE, IA-7, IA-7SE I still tend to think the issue can be tracked back mostly or exclusively to the recording. In the case of P-8, however, I have the suspect that it really goes a little too far. The sound sometimes seems a little adulterated, more subtle and lubricous then necessary, as with some paper in oil capacitors. As a result, with several recordings its qualities are somewhat in excess, the sound of instruments is too much detailed, the introspection digs a little too far to the point that the listener tends to be distracted by the minor details and does not get the global vision of the music, the whole plot is exploded into several different items, and the correlation between them seems somewhat unexpressed.

This is more evident in classical music, especially with low quality recordings, but also with some... "audiophile grade" records, where evidently the need to introduce special effects when played on any reasonable quality system produces a caricature of the original event when played in a top system.

So you might think we have here a hyper detailed, unforgiving preamplifier, with a not perfectly smooth sound. But is this the correct point of view? Not at all. There are a few important elements to take into consideration.

First of all, the unit has been compared with very high quality tube preamplifiers. In absolute terms, very few units can go through such a test without showing any flaw. In particular the sound is only very slightly less liquid and smooth than the references, which is in my view already a great success.

Secondly, the unit has a few areas (transparency and precision, in particular) in which its performance is better than the references.

Finally, if you just compare P-8 tag price with any decent preamplifier on the [Italian] market, you'll realize that, apart a few products of minor brands, this unit is probably the less expensive available. So, you simply should not expect it to be as good as the best units, costing ten or more times.

Actually, the P-8 excesses were barely perceivable, even though the unit has been tested in a very high quality system. I would really be very surprised if they should prove perceivable in a economically balanced system.

However, it approximates or makes better than the reference units in some areas, which makes it a very good unit, independently from its price tag, and a great bargain if you consider it.

So before buying a new preamp you are strongly suggested to give P-8 a chance, listening to it as long as possible to get used to its sound. At the end, perhaps you will decide that this is not the ideal pre-amp for you, but for sure it will open your eyes about what you should expect for the money.

Special thanks to Jason Lim of NuForce and Dimitri Toniolo of Mad For Music, NuForce Italian distributor, for the help, support and huge patience...