Carlo Morsiani, designer of high-end turntables and arms, listens to the T-Amp 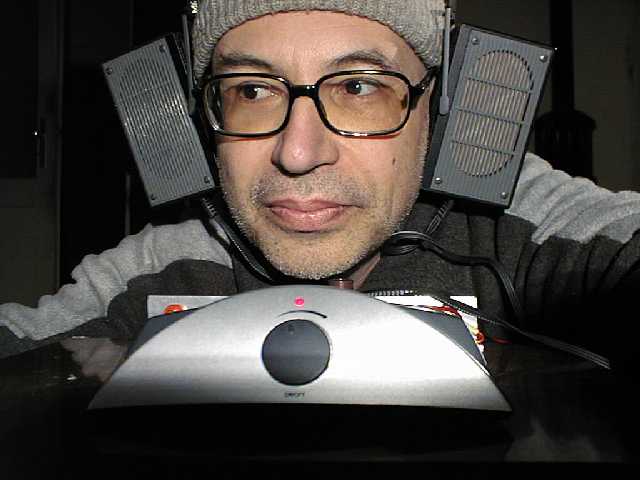 For the 3 following tests with 3 different playback systems I employed as source a Grunkel DVD player, a budget product, still decent. If the Sonic impact T-amp is really what it is told, I think that it must demonstrate this even without high cost sources. Then I wanted try what happens to people without an high class source. For this reason I deliberately resigned to employ my tonearm and turntable. From this point of view it is like as the test was done by any audiophile, and not by a manufacturer of tonearms and turntables. It shouldn't be told that I do this to emphasize my products. These remains untouched in these tests.

First test: T-amp and the Dynaco A-25.
I puchased the Dynaco A 25 enclosures in 1973. The 10' original woofers were broken and replaced by Advent 8' woofers, the foam replaced by natural cautchou surrounds made by me. So the bass is quicker and more articulated than with original 10' Seas woofers, the tweeter is the Seas original. In 1973 the A 25 were powered by a Dynaco preamp and 40 watt pwer amp, in 1976 these were replaced by a Sugden A 48, 45 watts, with the class A bias at 5 watts, the upgrade was noticeable. The A 48 was better than the Quad 303 and Radford, and the cost was reasonable for that time. Then I started collecting Sugden amlifiers, in 1984 I purchased the A 28, with 10 watt class A bias, then in 1992 the new A 21 A, with 25 watt in pure A class.
In 2000 I made a Gainclone with LM 1875 chips, then in 2005 the T-amp arrives and kills everything!
I do not regret anything, before the T-Amp my Sugden amplifiers served me with really high fidelity, it was very difficult to find something better, even at higher prices. Furthermore Sugden amplifiers never had failures. I have enjoyed even the Lm 1875 Gainclone for some years. The Dynaco-Advent hybrid speakers do not have high efficiency, so the T-amp can not deliver huge sound pressure without clipping, but if the T-amp is not forced beyond its power limit, the sound is delicious, the bass is well controlled and the detail retrival is very good.
I selected a DVD video by Incognito "live at ohnefilter". The band leader, the famous Bluey Maunik, plays often the rythmic guitar as accompany, in a band rich of bass, drums, percussions, 3 horns, 2 keyboardists, 4 soloists singers and choruses, the Maunik's guitar has some problems to be distingushed in such complex mass of sounds.
Now thanks to the T-amp I do not make efforts to follow Bluey's guitar. A second interesting element to control is the understandability of the words sung in english, in Italian there are more vocals, for this reason it is easier to understand, for an italian, of course!
In english thre are more consonants, these are more difficult to understand, mainly for an italian, of course! The T-amp makes the english sung words more understandable for me, and this is a great feature.

Second test: T-amp and Stax Sigma earspeakers.
Do not call this headphones, baby! This is not in the sense that it is a too huge tool, but really the maufacturer calls it "earspeakers", or speakers for ears, because the drivers are large, but the weight is not excessive.
In summer this is not the coolest thing I know, because the air can not circulate inside, but when it is not so hot to sweat, the listening is fabulous.
Thanks to the large electrostatic drivers the bass range is powerful, and the soundstage is not located inside the head, as it happens with standard headphones, thanks to the drivers angled at 90° degrees from the ears.
The efficiency of 89 db/1 watt is closer to speakers than headphones. But the drivers are close to ears, so the T-amp allows to listen at high levels without any trace of clipping.
I tested the Sigma with all my amplifiers, and my own live recordings made with Sennheiser MKE 2002 head microphones, the Sigma is my reference listening tool, I know very well what it can do. But now I must say that I believed to know it, the Sigma driven by the T-amp is even better. And I listened to the DVD player only. The ambience of the "ohnefilter" club now is better felt, Bluey's guitar is better located, and the voices are perfectly understandable.

Third test: T-amp and the big horns.
It is impressive to see the tiny T-amp installed in my big horns system. The lowest efficiency driver has 105 db /1watt. The system has 4 ways, two amplifiers, with electronic crossover for the low filter at 200 Hz. The two bass horn enclosure measure cm 120 wide, cm 90 high, cm 60 deep. The woofers are Altec 421, the mid-low horns are Doppenberg Oris 150, with IMG stage line SP 20 A speakers, the mid-high are Electrovoice SM 120 horns, those of the fabulous Sentry 3° speakers of 1976, the supertweeters JBL 2405.
The amplifier driving the woofers is now the Sugden A 21, I had for test more powerful amplifiers as the Marel Ha 350, which is clearly better, but I can not afford it.
Anyway the A 21 is better than a lot of other amplifiers I tested. The A 21 makes what it can, but it offers a tighter bass than many other amplifiers. The amplifier driving the upper 3 ways was until now the LM 1875 gainclone. I made this when was presented the Final Lab powered by not rechargeable cells. I tried the batteries, with 3 lead acid units of 12 volt, 7 amps in series for a total of about 39 volts at full charge. But then I preferred the classic mains power supply with toroidal transformer.
This has a more stable voltage than batteries, these during peaks showed voltage going down. After 4 listening hours, the rechage was of 10 hours.
The T-Amp is powered by a single battery of 12 volt, 7 amps, and an electrolytic capacitor of 2200 mf in parallel. After 4 hours listening, the recharge was ready in 5 minutes. I live in a country house, I can listen to Music as loud as I want.
My horn system has a very wide dynamic, such horn system can be installed in a small theatre. Before yuo can hear distortion from the horns, the tympanic membranes of your ears are overloaded!
The sound pressure meter measures a medium sound pressure of 90 decibels in the listening point, at the speakers more than 100 db. Audiophiles in their houses hear at 80 db, beyond this family and neighborours complaints arrive. I do not have neither of these problems.
The sound pressure is such as felt at a live rock concert, the bass is a punch to stomach, the drum pedal like a gun shot. With the Gainclone the system can sound damn loud, but the T-amp can sound loud the same, regardless the t-amp has lower power than the gainclone. In this case the horns' high efficiency lends a hand to the T-Amp.
Moreover the T-amp is quicker in the attacks, the Bluey's guitar is more distinguishable, voices more understandable and materialized at the center between speakers, the soundstage is more extended in depth, width and height.

Without Lucio's T-Amp test, I would have never purchased the T-amp. Thank you Lucio!