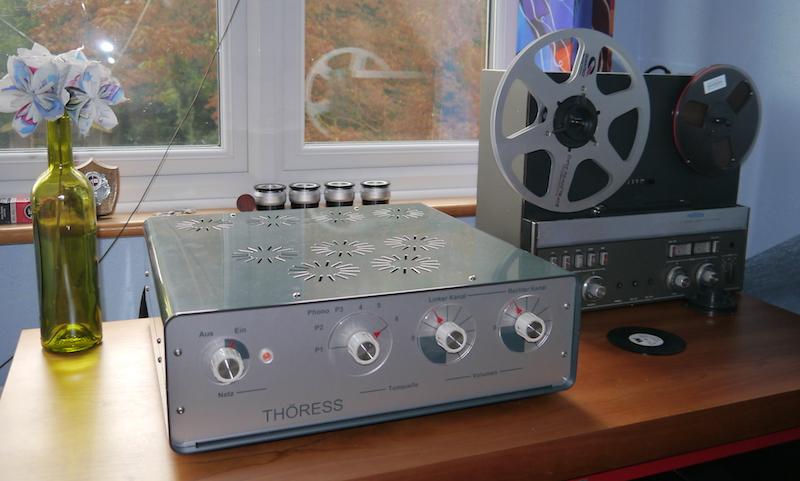 Listening to music is a very personal thing and finding a system to deliver the music is the same, we all like something different. The THÖRESS pre-amp dares to be different in looks and delivers a musical experience that is hard to forget. As you can see in the picture below the pre-amp is beautifully constructed, with point to point wiring and not a printed circuit board in sight. The THÖRESS pre-amp is designed to match the THÖRESS 300B monoblock power amplifiers that I reviewed in October 2016 beautifully built and classically sounding amplifiers of the single ended triode format. 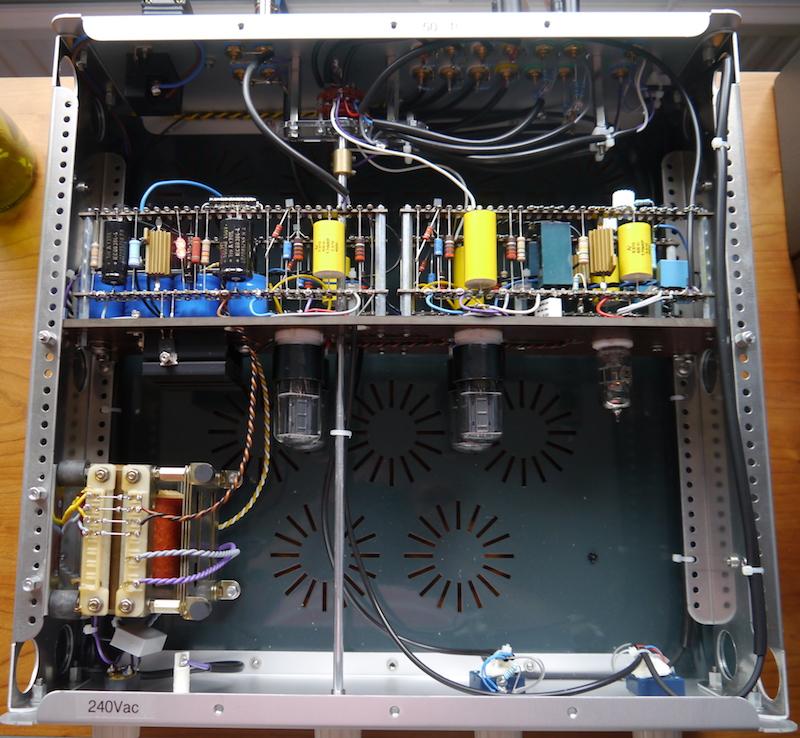 THÖRESS pre-amp view of the internals

This is a dual function pre-amp as it has a valve phono stage as well as the regular pre-amp functionality. The THÖRESS pre-amp uses dual mono volume controls, I prefer a single stereo volume control though I soon got used to the THÖRESS. The phono stage uses a single PCC88 and a pair of 12SN7GT valves with no step up transformers to deliver as standard a moving coil input. All the valves in this pre-amp are carefully selected and matched new old stock (NOS), no cheap Chinese valves here. Even though the valves are NOS they are not expensive to replace, a complete set will cost around €50 or more for the rarer manufacturers.

There are three moving coil inputs that can be configured with different load resistors, these are soldered to tags next to the phono sockets. A moving magnet phono stage can be requested in place of the moving coil as required. I plugged my turntable, with the Benz Micro Wood cartridge, into the middle set of phono sockets and never found a reason to change as the sound was perfectly balanced.

The pre-amp uses another pair of 12SN7GT valves as the output stage and they are capable of driving long interconnects into loads as low as 10kOhms. The pre-amp has dual output allowing a bi-amped setup, it also has a monitor output for one of the sources that is not switched.

Setting up the THÖRESS pre-amp is very simple, the review sample came with the valves fitted so it was just a matter of connecting up my turntable, DAC and Revox A77. The valves are automatically biased, like most valve pre-amps, so there are no adjustments to be made. After a few minutes warming up it had settled down and was singing beautifully through my class D power amplifier, driving a custom pair of speakers using an open baffle bass driver along with super tweeter plus single full range driver mounted in a carbon fibre sphere.

I also tried the THÖRESS pre-amp with my valve power amplifiers (Leak Stereo 20 and 50), they also worked well and allowed the system to give that wonderful all valve sound. I completed the review with the class D amplifier, it is very transparent allowing me to easily hear what the THÖRESS pre-amp was adding to the music. 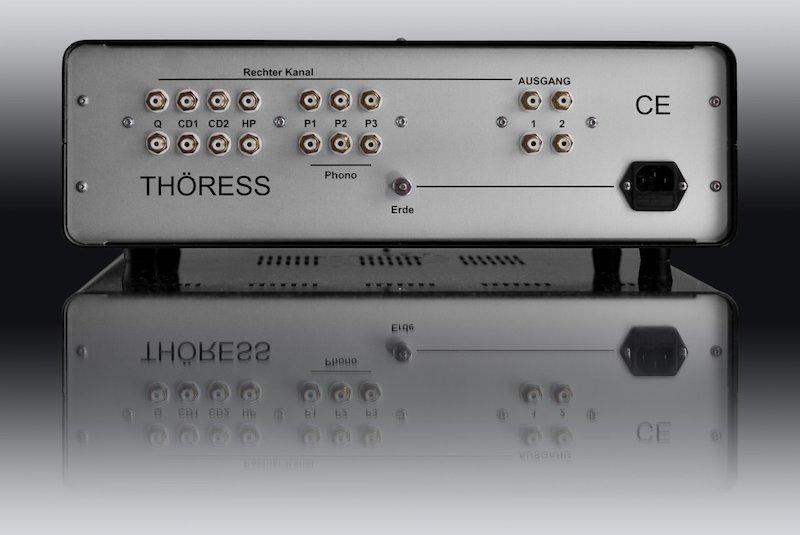 Listening to the pre-amp

Once warmed up the most obvious attribute of the THÖRESS pre-amp is a beautiful harmonic structure and well laid out soundstage. This is like no other pre-amp I have heard and you are really drawn into the music. Once heard you will find it hard to live without the THÖRESS. It was easy to spend many hours enjoying the vinyl collection and lost in the music.

The phono stage is amazingly quiet for an all valve circuit, the system is so transparent with no distractions from noise. My regular pre-amp, the MFA Classic is very neutral, adding nothing to the music in the way of artificial colouration. The THÖRESS is similar in many ways adding little apart from some valve warmth. This may sound like I am under playing the THÖRESS, this is not so as the MFA with a decent phono stage will cost more than the THÖRESS. The THÖRESS phono stage on it's own is the equal of any in the €3,000 to €5,000 price point making it seem relatively good value.

Using my digital source the music was delivered with lots of detail, great rhythm, with the bass leading edges well defined. Sometimes valve systems can lose the slam in the bass, expecially when the valves are beginning to fade. Like with my vinyl collection it was so easy just to sit back and enjoy the music, the THÖRESS just letting the music flow. It did not seem to matter what I was listening to, the THÖRESS was able to let you hear the music as intended. The MFA pre-amp seems rather flat and dull in comparison.

Switching source to the Revox A77 playing the tapes from Analogy Records that I reviewed back in May. The THÖRESS let the beautiful voice of Andrea Celeste project into the room with dynamics and swing. The percussion was detailed and realistic, not splashy as you might get with some systems. These analog tapes are something special and the THÖRESS lets the system really sing, with great harmonic structure, and rhythm, I could listen to the tapes all day long.

This is a large, bespoke pre-amp, built to order with the cartridge loading of the phono stage set to suit the owners cartridges. At this price point size is not a concern as the user is likely to have a custom equipment stand to show off the system and let it perform at its very best. The transparency and fluidity are extremely beguiling making it hard to live without, even in my rather adhoc and unusual system.

The THÖRESS let my favourite music and artists perform at their best, the vocals seemed much more natural and realistic than I have heard with other setups. You don't realise what is being added until it is suddenly not there, and you hear what the artist really intended. I will miss the THÖRESS pre-amp, it will be hard to return to my regular system.
If you have the opportunity to listen to the THÖRESS do take the time, in the right, matching system you will not be disappointed.