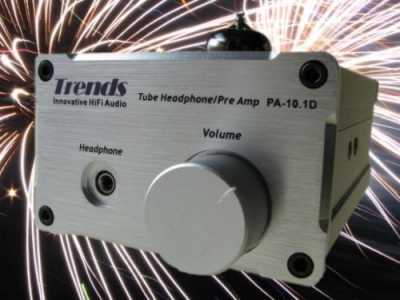 It's over five years now since I reviewed Trends' first product, the UD-10 USB converter/DAC, and since then I've been lucky enough to write about the entire Trends range. Their system has grown to include pre amp(s), power amp, integrated amp, and a dedicated linear power supply, all of which I covered as a system in this review. Trends actually had two pre amps, the original PA-10, and an upgraded PA-10SE, both of which I took a look at in this review in 2009. Trends have now brought out an alternative pre/headphone amp named the PA-10D GE.

The PA-10D GE looks very like it's siblings, the original PA-10 and the SE version. Only the front of the unit looks significantly different because Trends has given it a thicker (4mm) aluminium face-plate that does make it look a bit more classy. Inside ELNA Silmic II capacitors replace the Rubycons MCZ's and EVOX caps used in the SE. Trends claim that the Silmics give improved transient performance, enhanced spatial accuracy and low frequency realism. The choice of valve, ie Russian 6H23n or U.S.A GE 12AU7 remains the same as for the SE. These changes have pushed the price of the GE version up to 299 USD compared to the 269 USD asked for the SE. So is it worth the extra 30 dollars? 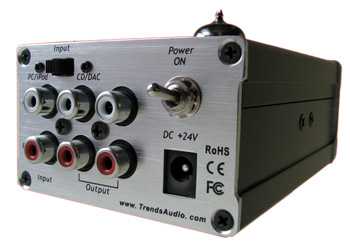 To assess the PA-10D GE I hooked it up between the UD-10 USB DAC, and the TA-10.2 power amp. The first thing that I listened for was noise, ie scratching when I turned the volume control knob, and hum. I am pleased the report that there was no noise at all. I then left the system playing music for 14 hours in order to burn in the PA-10D GE. When I returned, I had a problem. With the USB DAC plugged into the input marked 'CD/DAC', the system was much too quiet. I was using speakers of about 87 db sensitivity, and I figured that this would be a fairly typical speaker used with a Trends system. Reading the user manual, I noted that the input marked 'PC/iPod' had 6db of gain compared to the input marked 'CD/DAC' that was only 3 db, so I plugged the UD-10 in to that. That was much better but to be perfectly honest, I would sometimes want more gain, even in the smallish room that I was listening in. I suggest that inputs with a minimum gain of 6db and 9db would be much better!

So, with the volume control on the PA-10D GE at max I put on some music and sat back to listen. I had forgotten just how good the Trends components sound. It's true that I have heard better, but always at a significantly higher cost. The sound was rich, detailed, and well controlled, much like it has always been with a Trends system. There appeared to be slightly more sophistication with the PA-10D GE. Changing back to the SE version I didn't really feel that I was losing anything, and the difference was very slight. However when I listened to an audiophile test CD, and compared the sound of some well-recorded individual instruments I could hear that the GE did sound slightly 'cleaner'.

Using the GE version, I plugged in my cheap Sennheiser headphones to try it as a headphone amp. Now I freely admit that I do not do much listening through headphones, and my Sennheisers are budget phones. That said, the sound was enthralling enough to keep me trying many different tracks. I was particularly pleased with the bass, both in terms of volume and tunefulness. There was no hint of listening fatigue even after an hour or more, and I can imagine that with better quality headphones, the output of the GE would be more than satisfying enough for users who perhaps had to turn off their speakers late at night, but still wanted to continue enjoying their music. I should add that with the headphones there was more than enough gain, and the volume control was hardly above its minimum setting for most of the tracks that I played. Of course this will depend on the sensitivity of the headphones used, as can be seen from the following examples given on the Trends web site.

One word of caution when using headphones with the PA-10D GE. The thicker face-plate means that the socket is situated further back. The face-plate has been recessed, and the plug on my headphones fitted with no problem. But when I tried to use my extension lead, the plug on that had a wider body, and wouldn't insert far enough into the socket to make a reliable connection. 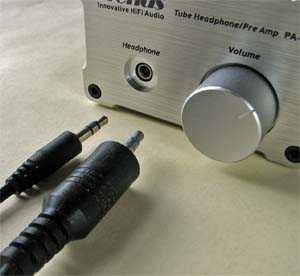 Trends wanted me to try using both the TA-10.2 and the TA-10.2P to bi-amp the speakers, so I set up the system as they had instructed. I had a couple of sets of speakers to try with this system: a 2000 UKP pair that I had on review, and some 'home-brews' that I had put together myself. What I found with both sets of speakers was that when bi-amping, the sound-stage grew slightly larger, with more space between the different elements of the music. It was very slightly more dynamic too. Did I prefer it to the single amp? Yes I did. In fact the sound was exceptionally enjoyable, and I found my listening sessions grew much longer than I intended. Trends asked me to try both vertical and horizontal bi-amping. 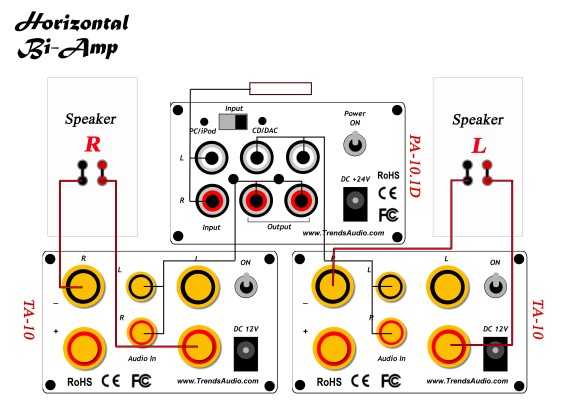 Please note that the above arrangement is incorrectly labeled and is actually for using each amplifier as a mono block rather than for horizontal bi-amping. 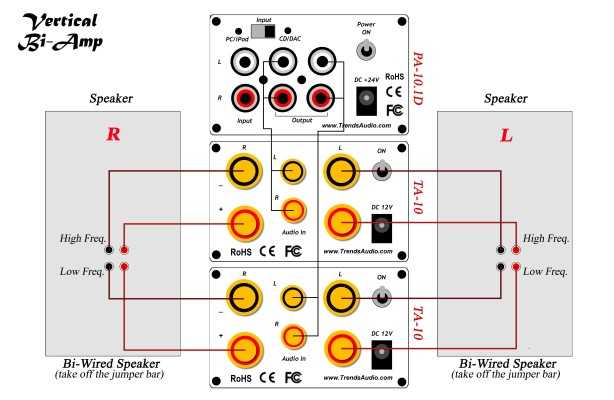 The sound further improved when I added in my own dual 12v linear power supply to feed both the power amplifiers (instead of the wall wart supplied with the amps). I wonder if Trends will offer their PW-10 power supply with twin 12 volt supplies as that really would be the 'icing on the cake' as far as the Trends system goes.

At a cost of less than 700 USD for the PA-10D GE, and a pair of TA-10.2P's, that's something of a bargain (for a bi-amp system) given the sound quality. But do keep in mind what I said about the gain. You may find that even with two power amps, the system may not go loud enough with your speakers unless they are over 90 db efficient (and most smaller speakers aren't). That said, add in a UD-10.1 lite (or better still UD-10.1), the 'right' speakers, and a computer source (or iPod), and you will have a system that will satisfy you for a long time to come.

It's not difficult these days for anybody to purchase modules, build them into attractive enclosures, and sell them as hi-if. What sets the winners apart from the losers is their ability to fine tune their equipment to make enjoyable music, and in that respect Trends certainly seems to be a winner! Over the years they have concentrated on refining their products rather than producing new ones, and that policy has paid off. By no means outdated, their components have stood the test of time, and grown together to produce a system that is truly greater than the sum of its parts. I can recommend them highly, more so if space is really at a premium and you don't want to compromise sound quality.

Summing up the new GE version of the PA-10, I would say that it is worth spending the extra money for it. If you already have the SE version though, there's no need to lose any sleep worrying whether you should buy the GE, you are not missing much!

PS - as I was finishing this review, I remembered that Trends had asked me to try the PA10D GE with both the valves, and I hadn't done so. My defence is that I was enjoying the music so much, it didn't occur to me to change anything. I think that the choice of valve is really down to personal taste anyway so I will just remind everybody that there is the ability to tune the Trends system by trying different valves in the pre amp.