I've already reviewed a component from Vela Audio, namely the Vela CD player which is the natural partner for the integrated amplifier now under test. Please refer to that review to know more about Vela Audio. The Vela amp has several things in common with its partner CD player: remote control, list price - which is exactly the same - cabinet and the plain-black looks.

A look under the hood

Like the CD player, the Vela amp is a rather big and solid component (43 x 32 x 8 cm, and 7,5 kg), with a good level of finish that makes it appear more expensive than it actually is.
The power supply makes use of a 200VA toroidal transformer from Elettromeccanica Taddei and of a quartet of 4700uF/63V filtering caps (two per channel). Internal wirings, from the power stage to the speakers binding posts, are made of OCC 7N cryo copper from AIRTECH EVO series. The internal layout is neat and clean as it is normally found on more expensive components.

In the rear we find the IEC socket for the mains cable, good and easy to use speakers binding posts and gold-plated RCA connectors. There are four inputs: three line level and one for phono (MM cartridges only). The line input labelled as AUX2/bypass can be configured in pass-through mode so to use the amplifier in a HT set-up, for example to drive the front channels. Also available are two line outputs: a standard PRE OUT (useful for connecting an active subwoofer, for example) and a classical REC OUT for external recording.
In the front panel there's also a minijack line input for connecting portable devices and a minijack headphones output. The remote, as said, is the same of the Vela CD player and can control both components.

The preamp stage is active and its gain is a conservative +6dB. The MM phono stage has a unusually high impedance (56 kOhm, instead of the standard 47 kOhm) and slightly high capacitance (220 pF). There are no infos on phono input sensitivity but its gain is a reassuring +60dB, so even low output MM carts will be stepped up properly.
The power stage seems to use a classical scheme with one transistor per channel, bolted to a massive heatsink. The volume pot is quite different from the usual ones: it uses a network of resistors and can be calibrated on 4 different settings of sensitivity. This allows the owner to get a precise microstepped volume adjustment with any kind of speaker, independent from its sensitivity. The fourth setting consists of 79 microsteps, 1 dB each. This means you can finely adjust the listening level in every situation. The balance control is adjustable as well and a step-by-step procedure allows the owner to set the AUX2 input as MAIN IN, to use the amplifier as a plain and simple power amp. Considering the price tag these special extra features are a welcome and unexpected gift! 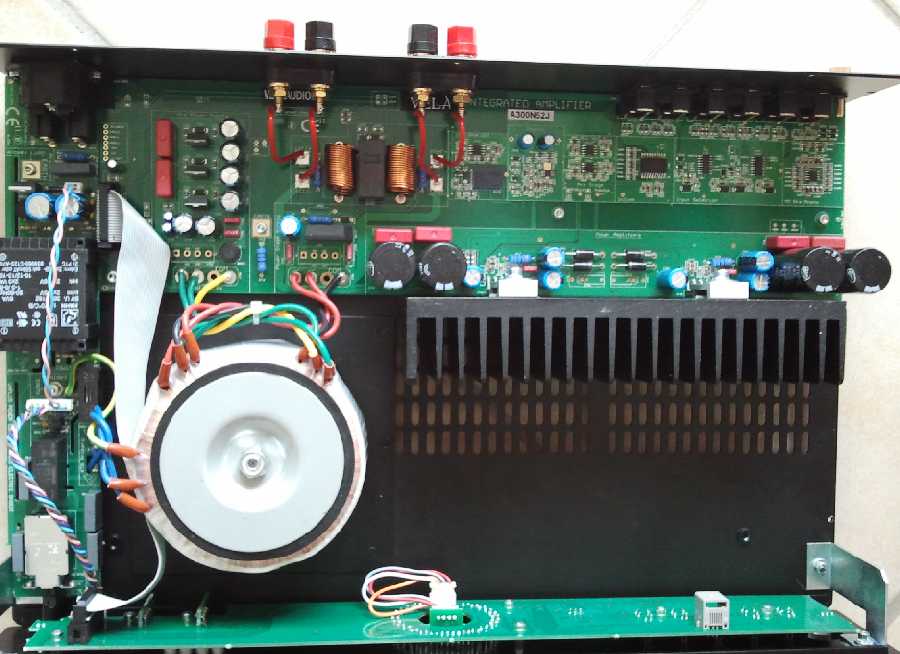 Having already reviewed the Vela CD player I was expecting a similar sound from the partner amplifier. Surprisingly, there are differences that should be noted. While the Vela CD has a tendency to sound soft and warm, the Vela amp is much more neutral, with a solid and punchy bass range and a more incisive mid-high range. It is not an agggressive sound but certainly it possesses a verve that was missing in the CD player. It is hard to say whether this kind of character has been a precise designer's choice or ot, with the aim to counterbalance the mild behaviour of the CD player. Who knows? Actually, The Vela Audio brochure states the two units were designed and optimized to play together...

The bass range, as said, has plenty of power, extension and punch. The mid-bass range is harmonically rich and, sometimes, a bit fat. As a result, percussions, electric bass and double bass benefit greatly from this kind of tonal balance and are reproduced in a lively way. Even the pipe organ is reproduced in a surprisingly realistic way, considering the price of this amplifier.

The mid range appears a bit shy, especially with voices. While the Vela CD player adds a velvet touch to the midrange, the Vela amp sounds a bit dry and, dare I say it, empty. Even brasses and electric guitars sound less aggressive than they should be. This dry character seems generated both by a lack of energy in this portion of the audio range and by a certain lack of harmonic content. Of course, it shouldn't be forgotten we're talking in absolute terms here, without taking into proper account the price tag of this amplifier.

More or less the same happens in the high range: realistic harmonic content is somehow missing and this becomes evident when listening to metallic percussions (cymbals, triangles etc.). There's nothing dramatically wrong but this attitude mercilessly reveals the budget-oriented price tag of the amplifier.

We're quite far from the big sound of more expensive amplifiers and we're also very far from the delicate transparency and detail of the best Class D mini amps. The Vela amp sounds solid, powerful and punchy, more than one could expect in this price range. We can't reasonably ask for more than that!

Comparing the amp and the CD player, I tend to prefer the tonal balance of the former, because it is much more neutral and linear: it gets the job done without adding too much of its own.

The output power of this amplifier is high so it is not easy to reach its limits during normal (ab)use. Of course, on highly demanding musical programs the bass range can suffer from a certain dynamic compression but one shouldn't forget there's a 200VA trasformer doing its hard work in the PSU. Forget the calm and rather relaxed character of the CD player, because this amplifier is dynamically lively and authoritative. Though not always lightening fast on attacks and decays, especially if the listening level is very high, this Vela amp remains emotionally involving. I was expecting a boring performance and how wrong I was! Even when dealing with the most aggressive and punchy tracks, the Vela amp shows excellent levels of PRaT, considering the price.

As a consequence, while the CD player was more at home with relaxed music, the amplifier can play everything, from Rage against the machine to massive pipe organ or orchestral works. Highly demanding dynamic requests don't seem a real problem but even in the microdynamics department its performance is more than adequate.

The sound, as said, isn't exactly big hence the 3D soundstage doesn't impress either. The height and the depth of the virtual scene, probably because of the rather shy mid range, are just sufficient while the width of the stage is rather good. Image focus should be better while the position of players and singers is rather stable, without fluctuations. Just to make things clearer, this amp can't create the wide and holographic soundstage of a, say, Trends Audio TA 10 (or a similar Class D amp). It lacks that kind of airy performance that makes the sound of those tiny amps really special.

Manufacturing & finish
More or less I can repeat the same things I wrote for the Vela CD player: there are very few things to complain of. You get all the inputs you might need, included a good sounding phono stage. Aestethically, a silver option should be made available, full black components might struggle to find their place combined with modern furnishings.
Sound.
If you forget, for a moment, the price tag, you can complain of a rather dry sound on the mid/high range and of a certain lack of harmonic richness. Bass and mid-bass are very good, but their energy, from time to time, seems to shadow the midrange. 3D imaging should be better as well.

In partnership with the Vela CD

The Company claims to have designed the amp and the CD player together, optimizing the tonal balance of both components in order to create a well balanced combo. Indeed, there's a kind of balance of attitudes when these two units play together. The relaxed aplomb of the CD player gets counterbalanced by the dynamic verve of the amplifier. That dry note of the amp is somehow mitigated by the velvet touch of the CD player. Though they can perform equally well in different contexts, it seems they give their best when used as a combo.

Rear view of the Vela amp: plenty of inputs there!

For just 499€ you get a powerful (50/8 Ohm - 75/4 Ohm) amplifier with plenty of inputs, MM phono stage included, and that's a 150€ saving, to say the least. Moreover, the amp comes with a handy remote control, the possibility to connect a portable device up front, a reasonable headphones output (which is missing on many competitors) and even a PRE OUT/MAIN IN feature that can be very useful. If you add that its sound is rather good and sometimes surprising you get the whole picture: the quality/price ratio of this amplifier is very high, certainly higher than that of the companion CD player.

Feel free to experiment with different mains cables and vibration control devices, they can make some difference, even if we're dealing with an almost entry-level component. Of course, play with the different settings of the volume pot until you can find the perfect match for the sensitivity of your speakers/ears. When choosing ancillary components - partner CD player aside - try to counterbalance the character of the amplifer. A neutral sounding CD player and open, airy speakers should work synergistically with the Vela amp. Considering the output power you shouldn't be concerned with loudspeakers sensitivity, unless your listening room is really big and you tend to indulge yourself with party sound pressure levels.

This Vela amp, especially when partnered with the Vela CD player, has been a pleasant surprise: for less than 1000€ you get a well engineered and nicely balanced combo that can be a valid alternative to similar pairs from NAD, Rotel, Cambridge and the usual suspects. As a plus, the Vela combo offers you that Made in Italy touch that is certainly a plus. Well done, Vela!