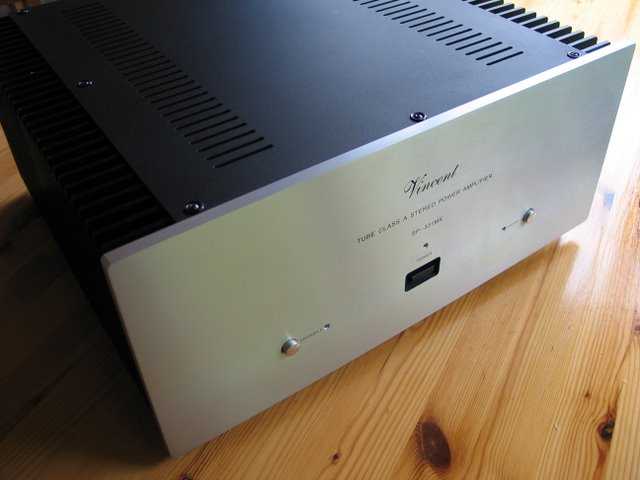 I have always wondered what a real muscle amp would sound like in my system, even before Musical Fidelity started telling us that we need hundreds of watts to produce decent music. There's something appealing about power, if only because providing it is the main task of any amplifier. I've had a number of amps in my system over the years, but almost all of them were about 50 watts and the most powerful one only reached about 65 watts. That doesn't seem to be a lot compared to some monster amps. It is not that I'm unhappy with my 50 watt Electrocompaniet amp, I'm just curious how much difference a more powerful amp would make.

My other fascination has always been class-A. I've had a number of class-A amps, even though most of them qualify as class-AB really. Class-A promises lower distortion and a purer, more natural sound. Lately I've also started to see the appeal of valves, as my new CD player, the Astin Trew AT3500, has a valve output stage and sounds wonderful, perhaps because of it.

So, the perfect amp should be powerful, run in class-A and utilise valves. Does that exist? Of course it does, but only at a price that is well outside of my budget. At least that's what I thought, until I noticed the Vincent SP-331MK power amp. It is powerful, at 150 watts, it claims class-A, uses valves and is reasonably affordable! That sounded too good to be true, I just had to try it. The reason why this amp can be so affordable is that, although Vincent actually is a German brand, their products are made in China. Vincent was one of the first audio brands to produce European designed audio in China. This amplifier still looks a lot like Vincent's first power amp, the D-150, which had the same power rating and also was a hybrid design. One of my brothers has been a happy user of a D-150 for years and still enjoys it on a daily basis. The SP-331MK could be seen as a modern and upgraded version of the classic D-150.

This amp obviously isn't class-A all the way up to 150 watts. The specifications claim that the first 10 watts are pure class-A, and the remaining 140 are class-B. So, it really is a class-AB amp then, albeit one that has more power in class-A than usual. Actually, you could say it is a 10 watt pure class-A amp with a 150 watt ordinary amp up its sleeve. Good for sophisticated late night listening as well as for loud parties. The next thing to notice is the fact that it isn't a pure valve amp but a hybrid design, with a valve section followed by a transistor output stage. There isn't any global feedback, both sections work independently with the valves providing voltage amplification and the transistors adding current. There are no less than 6 power transistors per channel, attached to very substantial heat sinks either side of the case. The power nicely doubles in 4 ohm load to 300 watts per channel and the claimed damping factor is substantial too, at 591, so this amp will be able to drive most loudspeakers on the market without any problem at all. 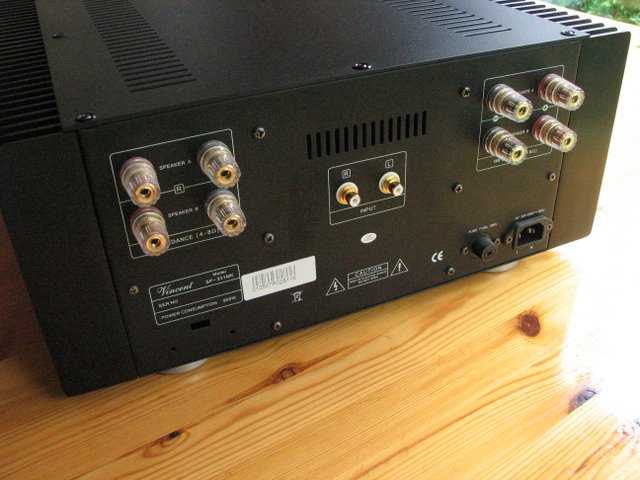 What really makes an impression is the size and weight of this amp. It is enormous and weighs an unprecedented (for me) 22 kilos! The size of the transformer is truly gigantic and it is rated at 800 watts! Just the front slab of aluminium alone must weight a kilo. The case actually didn't fit my rack and demanded the top position with much of it sticking out at the back. And it runs hot too! These big heat sinks aren't there just for show: they are needed. I checked the power consumption and found that this amp uses a whopping 270 watts, just sitting there without even playing music! This definitely isn't an amp you should leave switched on all the time! Not only will the room be too warm after a while, but the extra cost in electricity will be more than the cost of the amp itself over its lifetime! If you are an environmentalist, just stop reading. Actually, I'm a bit of an environmentalist myself and I have to say I was prepared to hate this amp for being so wasteful, not only with energy but also in materials. This is one component I was quietly hoping would sound bad, so that I wouldn't be tempted to buy it. But, sadly, it wasn't going to be like that.

The SP-331MK uses one 6N16 per channel for voltage amplification and this section has its own power supply with a 12AU7 valve for rectification. The 6N16 miniature valves are soldered in place and cannot easily be replaced, but Vincent claim a life expectancy of about 15000 hours, so that should not be a problem. The amp goes through a warm-up cycle when switched on, which takes about 20 seconds and makes life a bit easier for the valves and the other components, I assume. Fit and finish are excellent, and the amplifier behaved itself perfectly during the whole review period, with the exception of the on-off switch. When switching off this always sticks and has to be pulled out with fingernails to actually switch it off. A very minor flaw, I admit.

For the rest there's not much to mention about this power amp. Input is RCA only, with no balanced inputs provided, and output a double pair of WBT (style) terminals. The only special thing is that there are two extra switches on the front with which the two outputs can be separately selected. This allows two pairs of speakers to be connected, although many people will use the two output pairs for bi-wiring nowadays. All connectors are good quality and the whole amp feels very solid and well build. 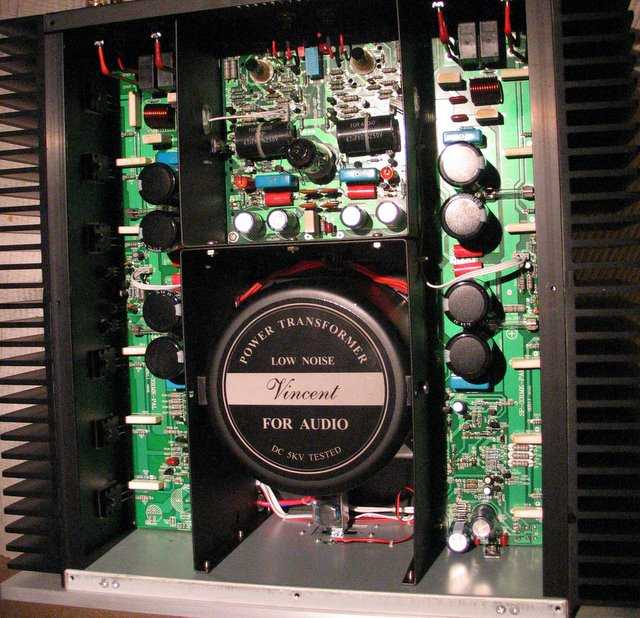 It took a bit of time to run this amp in. Some 40 hours of actual use, or about 10 kilowatt-hours to put it another way. It sounded promising from the start, but still had a bit of an edge to the treble, to be honest. But that disappeared and the result was a very nice and sweet sounding amp indeed. I had my expectations, of course. Who wouldn't have certain expectations when confronted with 22 kg of power amp, using valves and claiming class-A? All I can say is, it delivered. The sound is big and powerful, but still nicely detailed and transparent. There's a wonderful warmth while the bottom end is powerful and deep. And it does play considerably louder that any other amp that I've had driving my Dynaudio Contour 1.8mk2 speakers, which aren't very efficient and like a bit of current. The sound does harden up a little bit when you play loud, but only when you play very loud. At anything but rock concert levels this amp sounds completely in control and will never, ever be aggressive or less than pleasant to listen too. Impressive stuff.

The bottom end must be this amp's signature quality. It is really outstanding, for this price, and makes the whole sound more satisfying. I noticed deep bass notes on recordings that I had never noticed before. And it controlled my speakers so well that I actually removed the socks (yes) that I have had in the bass ports for some time now. With my Electrocompaniet, which certainly isn't weak in the bass, the bottom end would be too boomy without those socks. But the Vincent keeps a strong grip on things, only seemingly loosing it a little bit on very deep bass notes at higher volumes. Another thing that I noticed right away was the fact that bass had more definition and better pitch with this amp. Logical, with all that extra control, but very impressive as the bass isn't overly dry at all but actually nicely full and warm.

Sound staging is good too. That bottom end really helps to re-create hall acoustics and give physical presence to instruments like grand piano. The sound stage is a good size bigger than with any other amp I've had, but without getting things out of proportion. Focus and depth are fine too. The centre is strong and stable and voices are portrayed with good presence and excellent body. No thin images of instruments just hanging in space with this amp, but real people of flesh and blood, standing in a real space. I have to admit that the higher sound levels that are possible with this amplifier also help with this. And the absence of stress and distortion when you turn the volume up is a real joy, even after several weeks of use. 'Addictive' is another good word for this. I do have to add that I'm not actually playing that loud at all, just a bit louder than before and only occasionally. You don't need to be a hard-rock fan to appreciate what this amp can do.

It even sounds quite good straight after switch on, making it less of a problem to switch it off when not in use. It does sound slightly better when warm, after about 20-30 minutes, but it is already quite satisfying when still cold. That is a really good thing, considering that 270 watt power consumption figure and the fact that these 6N16 valves are difficult to replace.

The amp was also easily capable of showing the difference between my own Astin Trew AT3500 CD player and the North Star Sapphire that was on review. Both the warmth and tonal richness of the AT3500 as well as the precision, control and resolution of the Sapphire were reproduced without any problems and without breaking a sweat. This ability to convey the personality of the source is actually quite impressive and proves how capable and neutral the Vincent amp is. It does have a personality of its own, of course, but it also allows other components to do their thing at the same time. Very versatile, especially for such a powerful design. The preamp used was my Django transformer linestage and cabling was either Chord Chorus 2 and Odyssey 2 or the Anti Cables and interconnects (review forthcoming). The Vincent was equally able to show the differences between these two sets of cables.

For the money this is an unbelievable amplifier. It can be a little difficult to live with, as it is very big, very heavy and runs very hot, but the sound more than makes up for that. There's a definite valve sweetness and warmth to it, combined with genuine power, excellent control and very good resolution. It has a warm and generous personality that doesn't dominate the sound. Very highly recommended.