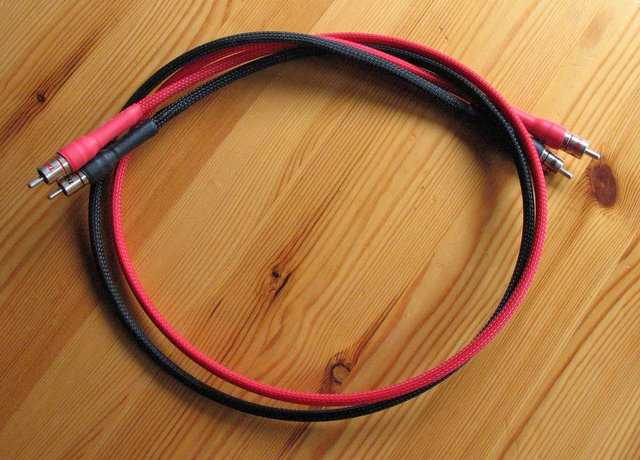 I suppose that, if anything, a modern audiophile could be defined by a belief in the sonic effects of cables. At least, non-audiophiles seem to think so and most of them strongly disagree. On first sight it does seem to be a bit ludicrous, I have to admit, to think that cables can seriously influence the quality of the sound that passes through them. I have no problems with the idea that one cable might sound slightly different to another. After all, cables have electric properties like capacitance and inductance and these can have an effect, if not on the sound directly then possibly on the equipment on either side of the cable in question. An actual difference in overall sound quality is a bit more difficult to explain. In budget systems the components themselves will almost certainly have a bigger effect than any cable, one would like to think.

Actually, I'm not completely sure about all these things, but many other reviewers seem to hear substantial differences between cables. I thought it was time to find out a bit more about this and decided to review some cables. Chord have a very good reputation for making high quality cables that aren't too expensive so it seemed logical to try some of theirs. Now, the next complication is that the current thinking about cables also includes something like 'consistency' of your 'cable loom'. The idea is that cables will work better if used consistently in your system, so your interlinks will have to match your speaker cables, and some people even suggest that the mains cables should be part of this too. Chord's advice for my system was to use the Chorus 2 interlink with the Odyssey 2 speaker cables, so that's what I did.

Then, finally, there's the problem that the effect of cables will depend on the components they are used with. This means that you should ideally reconsider your cables whenever you change one of your components. This could be costly. It also means that reviewing cables becomes a bit of a lottery. For that reason I tried these cables with a few different components, and in several combinations. 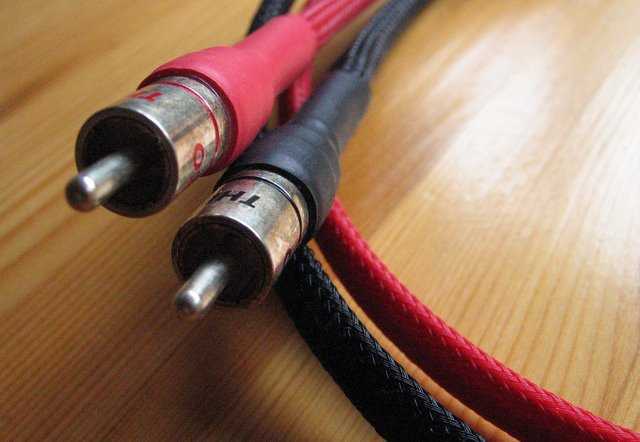 My own interlinks are home made, with the best cable I could find at Maplin's, which is Shark pure silver balanced cable. They are terminated with WBT Nextgen plugs, one pair with the copper version and another with silver nextgens. Both the actual cable as well as the plugs are quite exotic, not to say expensive, so I do assume this is probably as good as DIY interlinks get, within reason. The actual cost of just a set of WBT silver nextgen plugs is over £100, and the cable is £80 per meter, so even the materials for a 1 meter interlink are almost the same price as the Chord Chorus ready made ones. The shop price for cables like mine would be well over double the price of the Chorus interlinks. Obviously I was curious how they would compare to a ready made commercial cable of comparable price. One remaining difference is that my own cables are only 60 cm while the Chord interlinks are 1 meter, and this does give my cables a slight advantage, as shorter cables tend to have less of an effect on the sound.

These Chord cables are very well build and finished. A lot better than mine. It just shows that making something as simple as a cable isn't as easy as it seems. The speaker cables came terminated with banana plugs, and these were of good quality and had been connected very carefully. Both the speaker cables as well as the interlinks are quite stiff, making it difficult to connect them from time to time, specifically when equipment is close to a wall at the back. They are still a bit easier to use than mine, as my WBT nextgen plugs need to be locked which can be difficult and fiddly, especially when there not much space. The Chord interlinks on the other hand are very easy to attach, without requiring much force. Both the Chord interlinks as well as the speaker cables have a direction printed on them, and I always used them in the correct orientation, just to be sure.

The system used was my Astin Trew AT3500 CD player, my Django transformer preamp, my Electrocompaniet ECI-2 power amp and my Dynaudio Contour 1.8 mk2 speakers. Other components that were used during the long review period were the Naim CD5x, the Shanling CD3000 and North Star Sapphire CD players and a Vincent SP-331MK power amp. 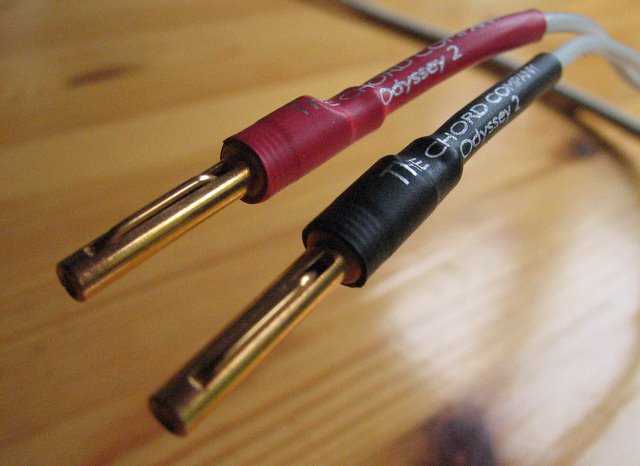 I started with the speaker cables. My own cables are Cable Talk 3.1, which are very basic and cheap. They are unterminated and I do have to say that the banana plugs on the Chord cables are extremely practical compared with having to work with bare cables. Obviously, some of the price difference between these two sets of cables comes from the fact that the Chords are terminated. But even in unterminated form they are several times the price of my Cable Talk set. Still, I cannot say I noticed a huge difference in sound between these and the Chord Odyssey. My cables are a tiny bit warmer while the Chords produce a little bit more detail and 'air', but the differences are only just noticeable, to be honest. Even in the long run, and after switching back and forth a few times I still couldn't hear more than a slight difference, and I didn't really develop a preference for one or the other set of speaker cables.

The next thing to try were the interlinks. I replaced both sets at the same time; the ones from the CD player to the preamp as well as the ones from the preamp to the power amp. I wasn't expecting much, as my own cables are quite fancy already, but to my surprise I did hear a small difference here too, and the Chord cables did seem to be slightly better than mine! They do show a bit more detail, a slightly cleaner and clearer top end and a little bit more space in the soundstage. My own interlinks seem somewhat soft in comparison.

But, and this is a big but, I never really had the feeling that these cables made a really substantial difference. Components came and went in my system, and I noticed clear differences between CD players, amps and speakers. And these differences always swamped the difference the cables made. Of course, high end audio is about subtle distinctions, but even with the interlinks I failed to develop a real preference for the Chord Chorus 2 or my own cables. This is a clear indication that the differences aren't very big, at least compared to the differences between the components I reviewed during the last few months. I was always very aware of the presence of a new amplifier or a new CD player in the system, even after a few weeks. But I quickly forgot about the cables, and had to check the back of the system to remind myself what I was actually listening to.

I also failed to notice any synergy between the Chord cables themselves, or between any cable and any other component for that matter. The effect of changing the cable seemed independent of the system context, except for the obvious fact that high quality equipment benefits more from a better cable than budget hifi. Miracles didn't happen, sadly, even though I wouldn't have minded the occasional revelation.

On the other hand, one would expect a commercial product to struggle when compared to a DIY solution of almost the same price. This is certainly not the case, as the Chord interlinks did perform a little bit better than mine in a direct comparison. I do have to admit that I think this is quite impressive and shows that there's more to cable design and construction than just using fancy and expensive parts. It is certainly not the case that my experiences have shown that making your own high-end cables is always cost effective. Actually, in this case I would say that the Chord Chorus 2 interlinks are the better option, as for a little bit more money you get a longer cable that sounds slightly better and is easier to use. This might sound sacrilegious in a review for TNT, with all our DIY recipes, but it is what I experienced. 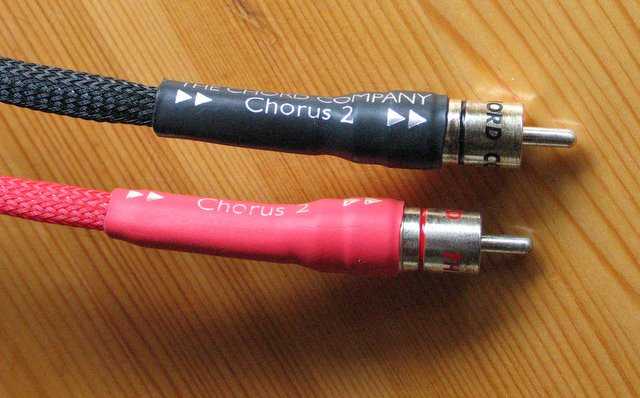 I expected to hear some improvements compared to my own, very basic speaker cables, and not much difference for the interconnects but, if anything, it was the other way around! The speaker cables are still of good quality, though, and practical in use. Given their relatively modest price there is very little to complain about. The interlinks are more expensive. But they did beat my DIY interlinks, if only by a whisker, and I have to admit that I was quite surprised and impressed by that.

I haven't been hearing shocking differences, but to be fair I wasn't expecting them. I guess I am a bit of a cable sceptic in the sense that I think that the sonic gain you can get from cables is limited and spending big money on cables is only sensible for top-of-the-range, cost-no-object high-end systems. The improvements that can be made with power supplies, like the Naim Flatcap, vibration control and good system matching are simply bigger, to my ears, than the effects of different cables. Having said that, these two Chord cables are still relatively affordable and do seem to be of good quality. I'm not sure how much further you could take this, but at this level it certainly still seems a sensible investment for a mid-range music system.

So, all in all I think these cables do deserve a recommendation. But only for use with good components. I do still think that the old 10% rule isn't a bad approximation. Perhaps we should change it to 10 - 20%. Spend that amount of your total budget on cables and you should be fine. And if your budget happens to be large enough for these cables I would certainly recommend an audition.