Guide to the best HiFi stereo system - at the least cost

A book by W.A. James 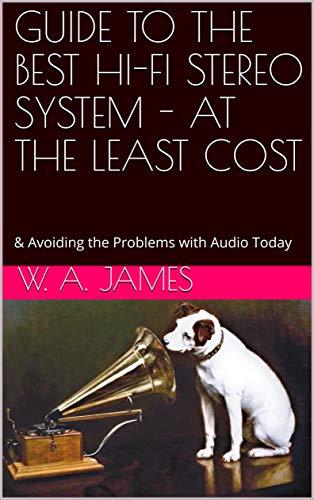 It is not often a book, written by someone mostly unknown to the audio fraternity, is launched. I have browsed the authors website on occasion and when the book appeared there bought it as much as for support for the author as for interest in his views.

This book is a compilation of much that has been published on the WAJ on Audio website albeit with some additions and sets out the authors views on audio and his feelings on the downwards path the hobby has taken over the years. An avowed disciple of J Gordon Holt's view that HiFi means just that, High Fidelity, as opposed to Audio for the sake of High End equipment he takes exception to why we have endless second grade equipment at inflated prices foisted on us. To say his views parallel mine is not moot and his constant reference to how important the lower mid range to faithful reproduction is totally valid.

A short quote from the Introduction - “This book is intended to serve as a guide to both the newbie and the seasoned audiophile as to how to target the best gear for assembling the very best and the most realistic audio system, at the very least possible cost”. The italics are mine, the sentiments are shared.

Along the line the author, W.A. James, dissects most of the things that go into an audio system and along the way tramples on some of the sacred cows that audio geeks take as gospel. His belief that high sensitivity, large cone speakers are a must for giving scale, dynamics and tone/timbre can't really be refuted and gives his reasoning as to why the audio market has gone the way it has, backwards from it's peak in the 60's and 70's. There is a great deal of information in this book and the author covers most of the important parts in audio although he eschews delving into the cable and tweak debate. There is much on everything through turntables, reel to reel tape, pre and main amplifiers and speakers, all of which are treated to his ideas of getting the best without taking out a mortgage on your house to get it.

His writings may be contentious, but so too were those of Galileo, Darwin and many others and judging by snide remarks from the current editor of Stereophile, J. Gordon Holt also. Speaking of which he tilts at some of the magazines and their complicity in dragging audio down to the depths it currently is.
An example: A speaker (which I won't mention here, Get The Book!) is given a rave review and only when the next model comes out are "faults" in the outgoing model revealed. I suppose many of us that read the mainstream supported by advetisers magazines have noticed this aspect and take their writings with the proverbial pinch of salt, WAJ does not.

In my opinion a worthwhile purchase and makes for some soul searching in our quest for audio nivarna.

The ebook is peppered with links so that the reader can view some of his source materials in the best tradition of modern writings and my only complaint is that I had to "register" my Android table as a Kindle to get the book. I found it a good read and at the price a bargin and refreshing in that there is no financial pandering to advertisers going on in the background.