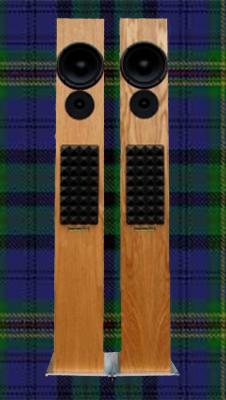 I didn't do many reviews in 2014 due to health problems but I was starting to feel a little better when Alacrity Audio wrote to me asking if I would like to review their latest creation, the Dundee6. As I had particularly liked Alacrity's other speakers with their innovative design that increases the output from smaller speakers, I accepted the offer. Instead of sending the Dundees via a courier, Alacrity delivered them, something that I was very grateful for as it was definitely a two man job to carry them up the stairs to my dedicated auditioning room. It's not that they are huge speakers, but they they a very solidly built, and come in flight cases that are just as well constructed.

As floor standers go, The Dundees are not large although they are quite tall (W x H x D: 180 x 1200 x 300 mm). Because of their comparatively small cross section, they are equipped with heavy metal base-plates into which are screwed four spikes. This arrangement ensures that the Dundees sit very firmly on the floor with no danger of movement. The drivers are arranged with the tweeter below the woofer, and further down the front baffle is a recess containing some sculptured acoustic foam. I don't doubt that the foam is there for good reason, but I feel that it could have been covered with speaker cloth to improve what makes a beautifully constructed speaker look slightly unfinished. The review samples were finished in English oak, but Alacrity can supply other finishes, eg Bird's Eye Maple, Rosewood, Macassar Ebony, or high-gloss colours. With the speakers placed closed to the rear wall, they blend in to even a smaller room, and take up no more space than a small stand mounted speaker on a stand.

As regular TNT-Audio readers may know, I have previously reviewed other speakers from the Alacrity Audio stable, namely the original Caterthuns, the Caterthuns-8's, and the Caterthun full-range version. The Caterethuns' 'claim to fame' is that they employ a method of extracting far more bass from a small driver/cabinet than is usually possible. With the Dundee6, that method is combined with a 1/4 wave tuned transmission line cabinet that takes the design a stage further. 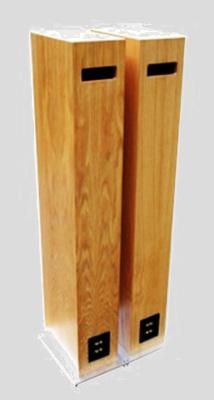 This is what Alacrity Audio say of the Dundee6:

Because our Acoustic Induction cabinet loading material acts as a 100Hz, 36dB / octave low-pass filter,
we do not have to find a way of absorbing all the mid-range, rear-ward radiation from our bass unit.

Therefore, the bass notes are fast, tight and immediate, with all the weight and extension you might expect
from such a design, plus a whole lot more.

warmth is improved, as is the stereo imaging.

And here are technical specifications:

I knew that, due to other commitments, I could only have the Dundees for a comparatively short spell so I got to work immediately. I removed them from the flight cases, screwing in the spikes to the very substantial metal base-plates, and positioned them, as Alacrity had suggested, close to both the side and rear walls.

It was recommended that I place the Dundees close to the wall behind them, and close to the side walls. After a bit of experimenting I found the ideal position in my room was with the backs of the cabinets 20 cm from the wall behind them (which put the drivers 52 cm from the wall), and 52 cm between the cabinets and side walls. It was also recommended to bi-wire these speakers, and that's what I did.

Assisting me in the auditioning of the Dundees was an M2Tech USB DAC (powered by the "Astin Trew Concord). Amplification started with a Yarland M34 valve amplifier and ended with a 55WPC home-built class AB amplifier. All this powered through a "James Audio power conditioner. I used both Audiophile Linux, and Foobar/jPlay on Windows 8 to feed the USB DAC.

The Dundees were already well burned in so I was able to get straight down to auditioning them. And as you may expect from a speaker with such a price tag, they were immediately impressive. The bass is the first quality that makes itself noticed (but not in an intrusive manner). It's prominent, clear, fast, tuneful, and well integrated, and it goes all the way down without diminishing as it does so. It isn't just bass guitar that becomes more tangible, voices develop a more life-like tone (with more body), and drum kits simply come alive. And the clarity of the bass means that it doesn't muddle the midrange, so that is crystal clear too. It should also be noted that even at higher volume levels, the bass was so well controlled that I had no issues with room resonances (with the exception of the track 'Dub Tractor' from the Talvin Singh album 'Back to Mine' that always sounds as though it is going to destroy my room regardless of what it is played through).

I don't recall hearing the heartbeat at the start of 'Dark Side of the Moon' sounding not only so clear, but so real. Rock music from the likes of Rory Gallagher, Walter Trout, and John Bonamassa sounded so 'solid' and so loud without actually having to play too loud. Leftfield, Deep Forest, and Massive Attack not only sounded 'deeper' but also 'larger'. And that weight of bass does not come at the cost of speed. The Dundees sounded fast, no matter what was playing through them.

Scale was another factor that could not be ignored with the Dundees. Whether it was tracks from Dadawa's 'Sister Drum', the soundtrack from the film 'Gladiator', or some orchestral symphony, the Dundees made it sound massive. Individual performers also appeared more life-sized through these speakers. I had always thought that scale must in some way be related to the size of the drivers, but the Dundees use only 6 inch woofers that turned my theory of scale, and bass output, on its head.

At this stage I should also say that in my opinion, the Dundees, rated at only 86 dB efficiency, benefit from a more powerful amplifier. I started off with the Yarland M34 that is rated at 35 WPC (watts per channel) but noticed that as I pushed the volume higher, the sound lost something, sounding more compressed. My 55 WPC transistor amp was better able to drive the Dundees louder, but even that ran out of steam at what I would call 'party levels'. At levels up to what I would call 'neighbours are away' the Dundees sounded very good with both these amplifiers, but if I owned the speakers, I would be looking for something a bit beefier to get the best from them at higher volume levels. 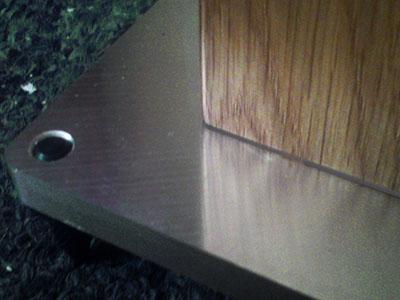 Alacrity also offer a granite baseplate as an alternative to the metal one.

The midrange was crystal clear, the top end sweet, and never tiring, and there was no shortage of detail. This all made for excellent imaging. In fact, this was one of the best imaging speakers that I have ever heard, if not the best. Not only was every element in the recording portrayed ('solidly') in a particular part of the sound stage, the space between them was quite discernible too. Not only was the sound stage well-defined, but it was large too. Unlike the other Caterthuns that were placed very close to the wall behind them, and had less depth to the sound stage, the depth with the Dundees was very impressive. The depth of sound stage was further enhanced by how well items such as drum kits were so well defined. With the Dundees, the drum kit sounded as clear as the vocalist, or instruments at the front of the sound stage.

The Dundees have incredible dynamics. I love the track 'Terminator' from the Yello album 'Pocket Universe', and through the Dundees it was just like being attacked by a pair of acoustic machine guns (I do hope that my neighbours were out at the time!).

Listening to individual instruments, they all sounded quite lifelike, with a rich and varied tone, and no doubt helped by the scale that made them appear life-sized in the sound stage. The sound stage was always wide and deep, and running my usual test with the 'Q' Sounds on Roger Waters' 'Amused to Death' album revealed that there was nothing wrong with phase issues. With the music playing, the Dundees simply faded away, and being located close to the corners of the room, were never physically intrusive even in my comparatively small auditioning room (3m x 3m).

I have a single listening seat in my auditioning room, and I tend to lean from side to side to see how wide the sweet spot is. I found that moving side to side made little or no difference, but as I got up from a seat on a few occasions, I noticed that the sound changed slightly. That may have been due to the arrangement of the drivers, with the woofer on top of the tweeter, or perhaps the height of the drivers which are sensibly positioned almost half the height of a typical room in a domestic residence. This didn't really matter, and, after adding cushions to my listening seat to listen at different heights, I decided that I liked my original listening height as much as any other.

The Dundees are very likeable speakers, offering a great deal of clarity and realism, PRaT to make any foot tap until it is tired, and bass to put a smile on the face of even the most hardened sub-woofer fan. The overall signature is slightly on the warm side, just enough to make them an enjoyable listen. And all that in a comparatively small package. The Dundees take up no more floor space than a small stand mount speaker on a decent stand, and can be placed well out of the way at the back of the room. They do come with a hefty price tag though, so I am having to be at my most critical, and do a bit of nit-picking. I've already mentioned that I felt that the Dundees should be partnered with a powerful amplifier, and that's not really a criticism, it's a fact of life with speakers with such a low sensitivity.
And I've also mentioned that panel of acoustic foam on the front of the speakers that I felt would be better covered in speaker cloth. The Dundees are pretty speakers and although that foam is functional, I do think that it could have been better presented. My only criticism is that although they have wonderful control over any type of music, I felt that they favoured more complex music, ie rock, and classical symphonies, rather than simple acoustic stuff. As such, I would say that although the Dundees sounded very good with everything that I played though them, they may be best suited to those that like rock or techno as opposed to folk, or who prefer full scale orchestral to chamber music. But that is being very particular about a pair of speakers that generally sounded better than much of what I've listened to in my life.
If you want the closest that you can come to a live rock concert in your listening room, the Dundees are probably your best bet. They do everything else very well too, and I guess anybody going out to spend nearly four and a half thousand pounds on a pair of speakers will want to audition them first, so I'll give the Dundees a big thumbs up, despite the price. Once again, Alacrity speakers left a huge smile on my face.