Proud to be different

This is not the first time a JMR loudspeaker has appeared here on TNT-Audio. In the past we positively reviewed the Twin Mk III bookshelf model and the Arpeggione floorstanders. Both these loudspeakers were, respectively, the entry-level models for the bookshelf and the floorstanding range. This time we're going to analyze a rather sophisticated design, a ∼3500€-range floorstander with several unusual features. 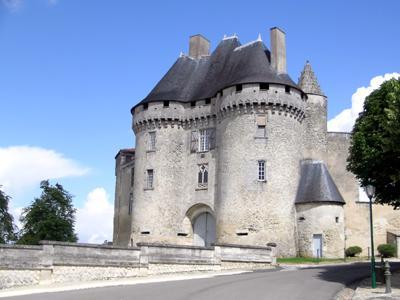 Jean Marie Reynaud products have been around since 1967 and today the Company plant covers a 2000sqm area. This means that JMR is one of the biggest loudspeaker manufacturers in France. Its founder, Jean Marie Reynaud, passed away in 2011 and now the Company is managed by his son Jean Claude, CEO since 2010 (Here a recent interview on TNT-Audio). JMR's facilities are located in Barbezieux, a small village of 4,000 people in the South-West of France. Being far from big towns I imagine things run smoothly and relaxed in Barbezieux, and perhaps this is the reason JMR designs have always been different from the rest.

These Cantabile Supreme floorstanders are another quite unusual design, indeed. First of all, they are a 2 & ½ way design in a transmission line enclosure. Secondly, the tweeter is an external unit mounted on top of the cabinet. The two woofers are 5.2" units with an antiresonant Zamak basket and a vented voice coil. The midwoofer which is devoted to the mid range has a central ogive to reduce air vorticity while the other midwoofer uses a soft dust cover. The magnets are shielded and connected to the rear panel with a steel rod, to increase the rigidity of the structure and dissipate the energy generated by the drivers.

The tweeter is a 1" silk dome unit with a double neodimium magnet. It makes use of a sort of front wave-guide horn intended to improve far field linearity. The air-wired crossover has different slopes: 6, 6 and 18 dB/octave. The two midwoofers work in parallel up to 600 Hz while the upper midwoofer crosses the tweeter at 3200 Hz! The network has been designed to offer a friendly load to the amplifier and makes use of high quality polypropylene caps and non-inductive resistors.

The cabinet, as said, is a triangular transmission line enclosure with a low-noise front firing port. The lower chamber can be partially sand-filled to improve damping and lower the center of gravity. 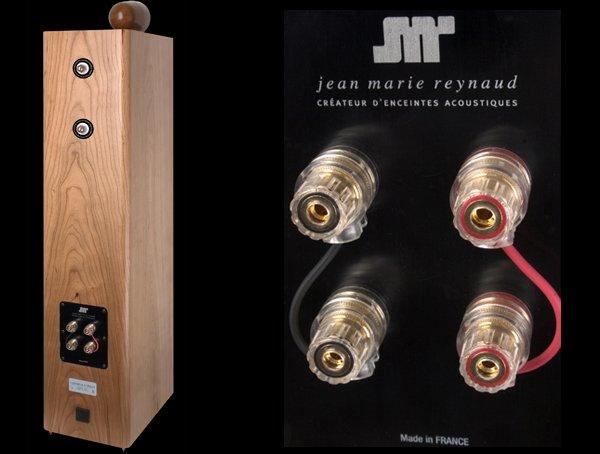 I've tested these speakers in biwire mode and decided to leave the lower chamber completely empty. After some A/B testing I've decided to install the supplied spikes.

Proud to be different 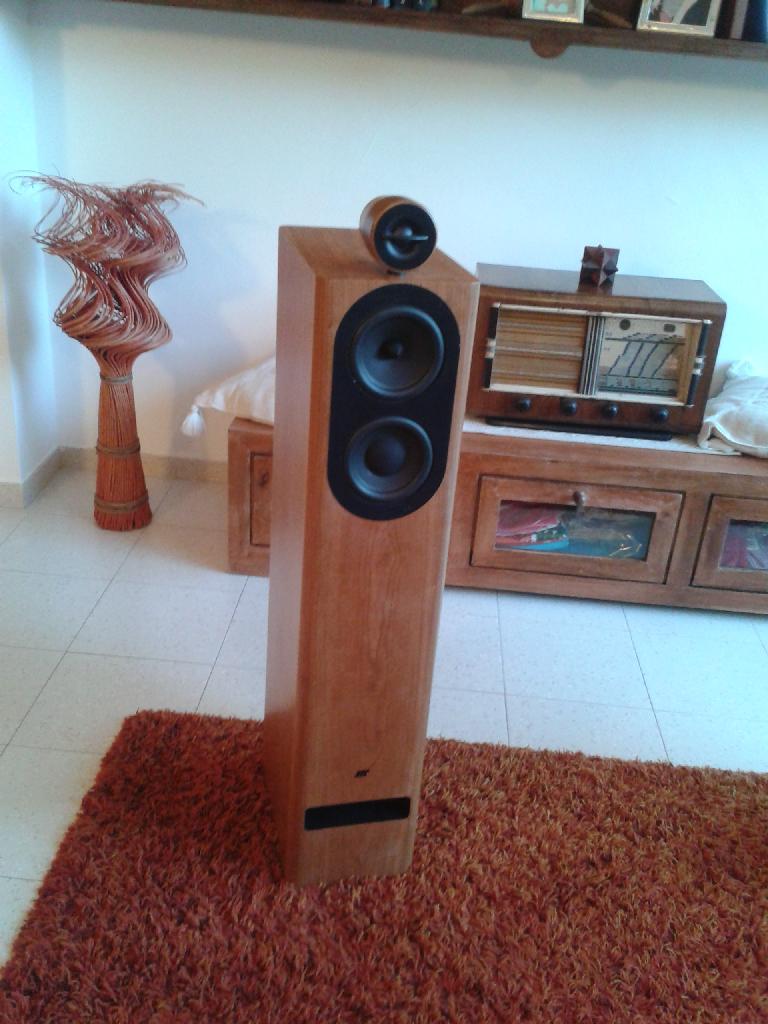 Right out of the box, ready to be moved to the listening room

Each time I approach a French loudspeaker that I want to review I admit I'm overwhelmed by a sense of helplessness. Prejudice, to be more precise. I expect a rather bright and thin sound, fast and precise but certainly not warm nor euphonic. Quite surprisingly, the Cantabile Supreme tonal balance is instead on the neutral side, with even a slight roll-off in the highest range and, of course, in the deepest bass. This is logical, considering the small size of the midwoofers! Even more logical if you consider that one of the two drivers is also forced to reproduce the mid range up to 3200 Hz! On the other end, while I was expecting a crisp sounding tweeter, I've found this dome unit precise and trasparent but never overbright or fatiguing.

Two aspects immediately catch the listener's attention after just the first notes: the mid range, extremely precise, gifted by a very natural sense of presence, and a general sense of realism, that makes the loudspeaker neither too forgiving or euphonic. These two characteristics, when paired together, tend to be cruel with the worst recordings, whose faults are then mercilessly exposed. On the other hand, this sane realism is a welcomed gift with good recordings: these speakers can retrieve, in a natural way, huge amounts of musical detail and information. Voices, for example, are extremely natural, precise, and comprehension of lyrics becomes very easy.
Even string instruments and percussions sound crisp, detailed and harmonically rich.

The sound of these floorstanders reminds me that certain full-range loudspeakers. This is not surprising, if you consider that a single driver covers the whole spectrum up to 3200 Hz! Of course, the second midwoofer and the tweeter add weight in the bass and refinement in the high range, respectively.

The bass range, thanks to the simultaneous action of the two woofers and to the transmission line enclosure, has weight, depth, speed and control, though the 35 Hz claimed extension appears rather optimistic to me. You won't find the typical boomy bass of tower loudspeakers with two woofers, these Cantabile Supreme's have control in spades. In a certain sense, their sound can be compared to that of high-end monitors.

Acoustic music (be it classical, jazz or folk) is the area where they perform at their best though they still sound reasonably accurate with other genres. Plugging in things like Rage against the machine, for example, is not disappointing, though certainly brute force isn't their favorite territory.
Their aplomb might appear, from time to time, a bit excessive. Massive Attack's most violent tracks, for example, force the speakers to their natural limits, especially in the bass. If the listening level becomes very loud, traces of compression can be detected quite easily and the sound becomes harmonically poorer. Lower the volume a little bit and the small midwoofers breathe again without effort.

These speakers are fairly sensitive, hence they can sound loud even with a limited amount of power. The midwoofers are small, but have a good travel, so their dynamic performance, staying within their physical limits, is very good. Control and speed are excellent and only killer tracks, played at unusual listening levels, can impair their performance.

Sheer volence and impact do not belong within their DNA, but these French speakers sound bigger than they actually are. Especially in the mid range, if the musical content isn't too intricate, they can sound really explosive: the snare drum, for example, is fast, dry and ear-splitting when needed, a real gunshot.

In the microdynamics department their performance is extraordinary, their ability to follow each and every minuscule variation is really outstanding much like some of the best monitors. Because of the transmission line load I was expecting a deep but lazy bass. Quite the contrary! 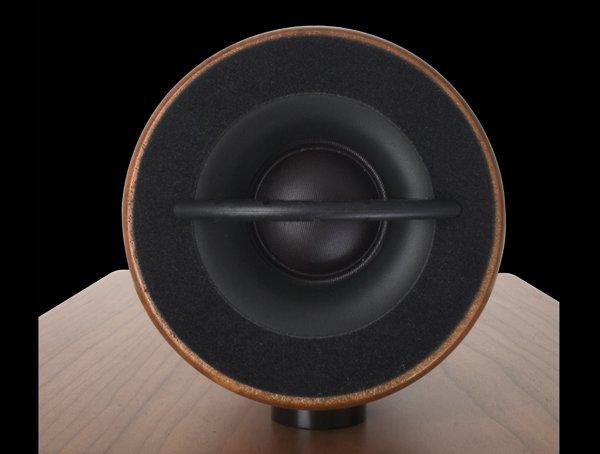 The cabinet is extremely stiff and sturdy and the tweeter is mounted externally. These two aspects help build a 3D soundstage that is extemely wide, focused and nicely stable. To get a comparable level of performance in these particular areas you would normally have to look for much more expensive loudspeakers. Geometrically, it is the width of the virtual scene that is truly excellent, while depth and height are just very good. Sometimes, the stage appears closer to the listener than one might expect but this doesn't affect the realism of the performance: three-dimensional illusion is excellent and you can detect, without any doubt, the position of each and every singer or player within the virtual stage.

Personally, I've preferred listening to the JMR's with the original spikes in place. Each speaker uses 4 spikes so finding the perfect equilibrium position might be a bit tricky. You might want to use some spikes shoes, like the Atacama ones, which use a soft rubber disk to interface with the floor. These devices, somehow, attenuate the effect of the spikes: some aspect might improve, others might get worse, so it's up to you to decide. In the end I preferred using the spikes without spike shoes.
For the best tonal balance keep the speakers far from the walls while optimizing the virtual 3D image requires that you need to experiment with some toe-in. Each listening room is different, so feel free to experiment with different amounts of toe-in.

The owner's manual recommends at least 50 hours of break-in but the test samples I received were already broken-in, so I can't confirm or comment. In any case the manual claims that the break-in procedure will be complete after between 200 and 500 hours, which sounds quite bizarre to me, considering the 300 hours difference between these two extreme values (however volume and music style could have a bearing). Moreover, 500 hours are equivalent to 2 hours a day for 8 months!!! Again, I can't confirm, for sure that the speakers sound significantly better after the first hour of listening. If you're listening to these speakers in a HiFi store, be careful and avoid trying to judge them before one full hour of intensive use (background listening doesn't count).

Amp matching. Considering these speakers are not a tough load, despite their 4 ohm nominal impedance, and are quite sensitive, any good mid-powered interated amplifier will suffice. Even a 50-watt tube amplifier could be a very good choice. Because of their tonal balance I'd avoid partnering these speakers with bright ancillaries, otherwise the final result might be excessive and fatiguing.

Finally, since one of the midwoofers acts almost like a full-range driver, I'd avoid using the dust grids, as they influence the frequency response in the upper mid range. Luckily the tweeter is mounted externally, hence it is independent from the dust grid.

Manufacturing & finish.
These speakers have been built with very good materials and a high level of craftsmanship. Just to cite an example, the dust grids are held in place with small invisible magnets! The tweeter remains quite exposed but the plastic waveguide works as a source of protection. In any case, be extremely careful with kids, this external tweeter is too attractive!
The owner's manual is good, though a bit brief. The quality/price ratio heavily depends from the quality of the finish and the originality of the design. Hence it is difficult to consider the Cantabile Supreme an irresistible bargain. Actually there are many competitors around the 3000€ price tag.
Sound.
These speakers are refined, precise and rather complete from the tonal point of view. My personal opinion is that the midwoofer, being forced to reproduce the mid range, is a bit over-stressed. In presence of strong, deep bass notes midrange clarity begins to suffer, which is logical if you consider it is the same driver that does everything. The transmission line system extends the bass range more than a standard bass reflex enclosure would do but, of course, it can't do everything. Hence, especially in the deepest bass, some trace of confusion and loss of articulation can be detected. With respect to the soundstaging performance, the height of the scene should be better. Finally, as already remarked, these speakers are not friendly with poor recordings.

JMR is not new to original thinking and designing. The character of these speakers is much less French than you might expect, though a certain presence effect of the mid-high range can't be denied. They're at home with classical, jazz and acoustic music in general, but lack some of the aggressiveness that is needed with rock and modern electronic music. These Cantabile Supreme might be the right cup of tea for a music lover who prefers detail, harmonic richness, transparency and precision and who can tolerate an idiosyncratic behaviour with bad recordings.