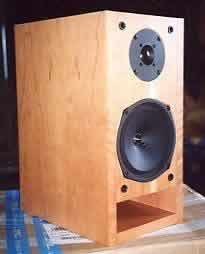 Regular readers will know of my experience of the Loth-x Polaris, a mighty full-range back-loaded horn of awesome ability. I still have a pang of regret every time I look at photos of them taken in my room - ho hum. But at 5000 pounds a pair we're talking serious money and spending more on a pair of speakers than the family car wasn't an option.

Given the price it might seem to be expected that they'd be something special, but Loth-x's commitment to single ended amps and the very efficient speakers that they require to work properly goes right through their range. So having tasted one of their three flagship models I though it would be interesting to have a look at what they can do at the very bottom of their range - the 300 pound BS-1's that are the subject of this test.

The Polaris were massive horns, in total contrast the BS-1's are fairly small standmounts, the 'BS' standing for 'bookshelf'.. My pair were finished in a rather attractive real wood, blond veneer. In most speakers such veneering is done in a way as to give the impression that the speaker is cut from solid. The BS-1's are different in that they look as if each panel was veneered before it was put together, giving the impression of a box made of slabs of wood.
One reason for this is that the 'port', such as it is, is not the usual 'hole' but a large full width slot running across the bottom of the baffle. The overall effect is highly unusual and visually quite effective. The cabinets seem heavy and well built for the price with the black drivers contrasting with the pale woodwork. Allen bolts hold the main driver which adds to an impression of a speaker beyond it's price point. Good quality, gold plated, single wire terminals are fitted.

Apart from the odd port and 'slab' construction the BS-1's appear to be utterly conventional two way small box loudspeakers. A soft dome tweeter backs up a pulped paper mid/base. However appearances can be deceiving...

In most two way speakers the crossover between the mid/bass driver and the tweeter is between 2000 and 4000 hz, a frequency chosen because of the limits of the drivers i.e. few tweeters like going below 2000 hz, few woofers over 4000 hz. There are good reasons for doing this but disadvantages too. This 'typical' crossover area is where the ear is very sensitive and where a lot of a typical music signal is to be found - the upper midband. For it to work the crossover must be smooth and even, keep phase relationships between drivers and the characteristic sound of each driver must be similar. There is also the question of the 'Doppler effect' (see Polaris review).

An alternative approach is to run one of the drivers well beyond the normal normal crossover point, Cabasse tend to run their tweeters down to 1800 hz and others like Epos run the Woofer well up the frequency scale. A few like Triangle run a main driver up as far as 10,000 hz using the tweeter as a 'super tweeter' only to fill in the 'ting!' at the top. Loth-x take this latter approach to its logical extreme with the BS-1. In fact the same driver is run 'full-range' in other models with the help of a whizzer cone.
Here once again the bass/mid driver is run without any crossover so its roll-off is due solely to the limits of its high frequency extension. Getting a driver to cope with the stresses and speed required to cover a range of frequencies between 50 and 10,000 hz is a tall order especially in the budget field where more compromises need to be made. That said one requirement of such a semi full-range driver, a light cone, also has the advantage of conferring high efficiency, essential for use with single ended valve amps. The soft dome tweeter rolls in by virtue of a single capacitor, it's the simplest possible crossover and one reserved for manufacturers who can build and match their drivers to one another as Loth-x has done.

I don't have the facilities to measure absolute efficiency but subjectively the BS-1s are very efficient. They seem an easy match for the Cabasse Sloop (94.5dbl) and were well ahead of the PMT's. This was gratifying. I've been searching for a speaker that was cheap yet useable with low powered SE's and the PMT had proved a disappointment both in terms of efficency and impedence (4 ohm). The BS-1 is an easy 8 ohms and coupled with the 300b Integrated amp Loth-x supplied for the test it produced very respectable volumes in my large (6.5*5m) room dispite there being only 8 watts on tap.

The 'in-room' response was less happy. The Polaris had produced an amazingly flat response curve, well up with the best conventional speakers I had to hand. In the same position and using the same ancilliaries the BC-1 provided the some of the worse figures I've seen (though all the others were quality speakers costing far more), with strong midrange emphasis around 1 khz. Above this treble rolled off smoothly but rather too quickly and at the other end of the scale bass rolled off quite early after a (port induced?) peak around 100 hz. The upper base was a little restrained. I'm not saying this was a disasterous result by any means but more conventional two-ways of similar cost will generally measure better.

Using a 3000 pound amp with 300 pound speakers would not be a normal recommendation but it is in this rarefied company that the BS-1 is designed to operate at it's best. As already mentioned the efficiency and ease of drive meant that a 300b was perfectly happy whereas with most small two-ways it'd be a question of a horrible missmatch. This is the BS-1's raison d'etre and it showed. That light cone made the main driver very fast and detailed. Timing was excellent and the bass punchy. However the bass was curtailed - putting the BS-1 near a rear wall helped but rather destroyed the imaging. A metre from the back wall the BS-1 excelled, and for such a cheap speaker image depth was exceptional. The downside was a lack of scale in music, the complete opposite of the Polaris.

The response anomalies also showed themselves as a 'cuppy' or 'papery' colouration, almost as if a whizzer cone was present. The shine was missing of the highest frequencies and as already mentioned, bass was limited. The overall sound was also dry with the Loth-x SE amp, a very revealing example of the breed, in fact the Audion pairing proved a better tonal match though they lacked the 300b's 'hear through' midrange. Overall it's a character that you may get used to and learn to ignore, see as normal, or it may irritate, these things are personal and once again dependent on the compromises you're happy with elsewhere in the system or indeed what music you listen to.

Which all sounds a bit of a disaster, but the BS-1's retained hints of the awesome coherence of the Polaris. Though scale was lacking it wasn't because the sound fell apart when things got complex.
Surprisingly the BS-1's handled high rock levels like 'Nevermind' with comparative ease - most small speakers run out of steam too early and sound compressed, the BS-1's seemed to take it in their stride, there just wasn't the bass to underpin the sound. In fact I'd put the BS-1 as a prime candidate for a quality sub like a REL where it could be let to do what it does best. Vocals were a mixed bag. Female vocal in particular had great projection and immediacy, Tracey Chapman's 'behind the wall' had the dry short acoustic the piece demands, however male vocal sounded rather nasal. For example Mark Knopfler had a worse cold than usual...

As it stands the BS-1 is happiest with small scale music and female vocal, light jazz like 'Take Five' being perfect, the BS-1's really loving the reedy sax and drum echo. It'll cope with more major stuff but the biggest snag the BS-1 has is that it is likely to be partnered with expensive amplifiers and therefore be compared with speakers from well outside its price range. Perversely putting it into a budget system is perhaps the worse thing you could do. Here the highly revealing nature will ruthlessly show up any cracks elsewhere. Any number of classic valve amps will dovetail far more effectively, Leaks, Quads, Rogers etc to name just a few. The emphasis being on using a warm, smooth amp - the Koratos proving too forward, the Audions ideal.

Reading the above it seems like a pretty mixed review but that would be missing the point - this is no 'me too' product. If you have a conventional budget system of CD player and integrated transistor amp then there are many speakers out there that will give a more even handed, though possibly less open view of events. BUT if you are into low powered valves and haven't the cash or perhaps more importantly the space for big horns or ported speakers then there are few alternatives to the BS-1. There are no 'no-compromise' speakers out there and the BS-1 has taken the low-cost/high-efficiency/small size route, which inevitably compromises bass extension and tonal accuracy. That the BS-1 works as well as it does is a tribute in itself.
The PMT costs not a lot less and you have to build it yourself, and in the final analysis is less well suited to SE amps. In fact despite an extensive search I can't see a ready built option that would do the same job.
This is a niche product but one that is spot on target, if your room can't take the wardrobe sized speakers high efficiency generally requires than you have few options. I might add that with its curtailed bass and front facing port, that if you do want to a speaker on a 'bookshelf' you could do a lot worse - making it a perfect 'rear effects' speaker in a serious surround set-up. There are many vintage valve amps and some cheap SE amps out there especially in kit form and right now if you are short of cash or space the BS-1 is going to be your first port of call. Loth-x are to be congratulated in producing something out of the ordinary that allows the magic of SE amps into more homes.