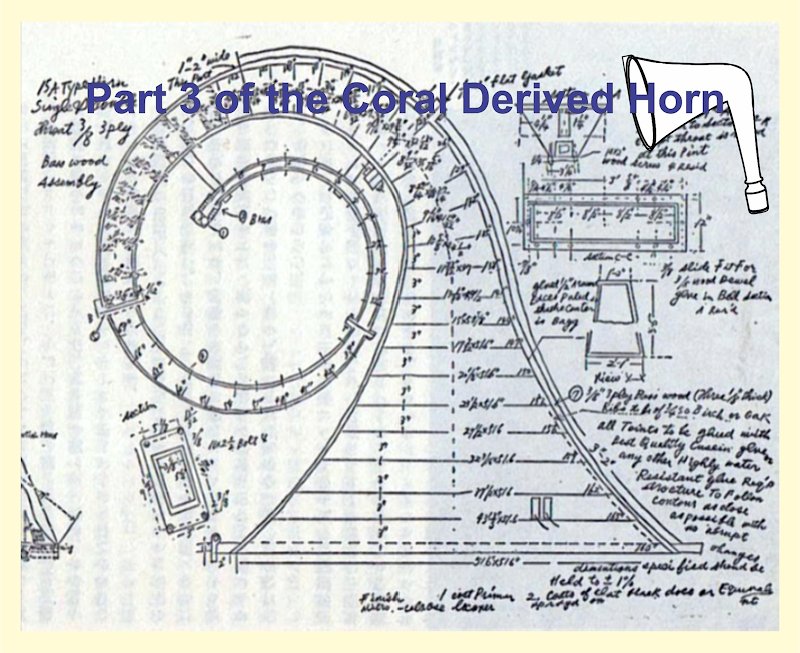 Go back to Part I and Part II of this series of articles.

This Coral derived cabinet has fascinated me from the outset and when a pair of Goodmans Twin Axioms came my way I started on yet another voyage of discovery. Having built the other two pairs with a painted black finish to save costs, this time I determined to go with Walnut with Rosewood trim. As with most so called full range drivers, I find I want a bit more treble and had a pair of tweeters which were to be incorporated into the front panel.

As nothing in my experience goes to plan, at the last moment I found a pair of the supposed Holy Grail of full range drivers, the Goodmans Axiom 80. Which were slightly smaller. Need I add that this happened after the cabinet was almost complete! To further annoy, after the cabinet was modified to accept the Axiom 80's, a friend took the Twin Axioms off me and had another set of cabinets built to house them. The "Ever Decreasing Circles" saying comes to mind.

The Coral cabinet was originally designed for drivers smaller than the 12" ones I used, so I felt on pretty firm ground going with the extra expense of wood finish. Goodmans drivers are all efficient/sensitive and both the Twin Axioms and Axiom 80's I assumed to be around 98 dB/W/m. I say assumed because there is very little to go on as in the day sensitivity was a given in speaker design. Twin Axiom details are here and information on the Axiom 80" is here. Here is a link to Fertin Acoustics who claim to be making a modern version of the Axiom 80.

What makes the Axiom 80 so special is that it has neither surrounds nor spider. The cone, at its periphery, has double cantilevers connected to a ring system as does the voice coil. Because of this the cone moves in an almost perfect piston like manner, with little or no bending moment applied to the cone and vanishingly small resistance to movement in/out. To quote Robert Heinlein: «TANSTAAFL or There Ain't No Such Thing As A Free Lunch.» There are downsides, all three of them:

a) No dust protection to the voice coil assembly
b) Despite the powerful magnet (17,000 Gauss or 1.7 Tesla) the speaker can only handle 6 Watts
c) It's a bit fragile - the cantilevers have a history of coming loose from the cone. One of mine failed this way but a dab of glue fixed it.

The specs claim a response of 20 Hz to 20 kHz, the cabinet limits that to 30 Hz where it roll off very sharply. 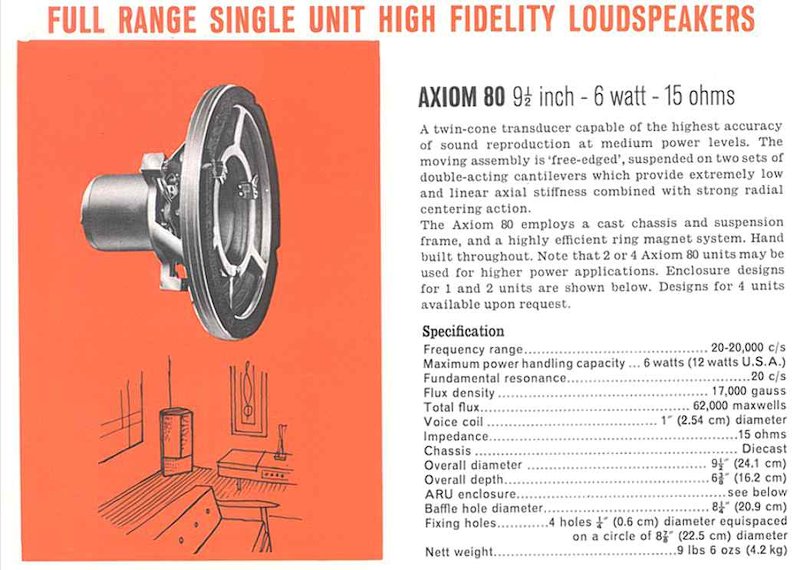 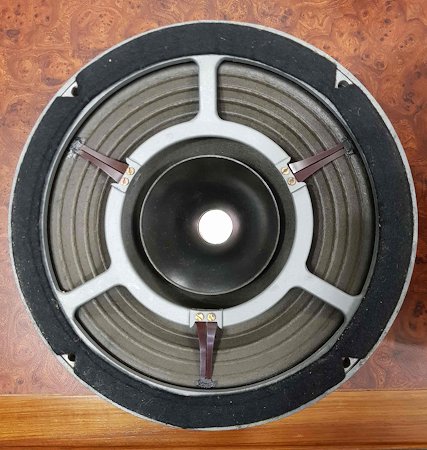 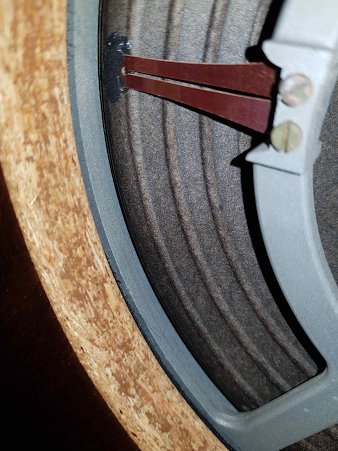 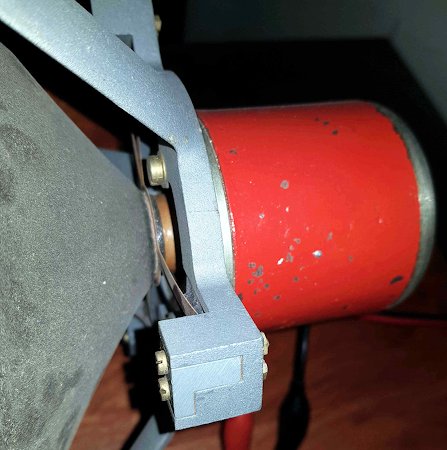 Looking closely at the above pictures the gap between the cone and basket is very small. This must have been a difficult and expensive speaker to make as there are many parts either cast into the frame or machined up to suit. Each of the cantilevers is adjustable, as are those that position the voice coil. In addition to that, the circular frame that holds the front cantilevers consists of two circular rings with three ribs which is then screwed to the main basket and with machine screws into threaded holes. 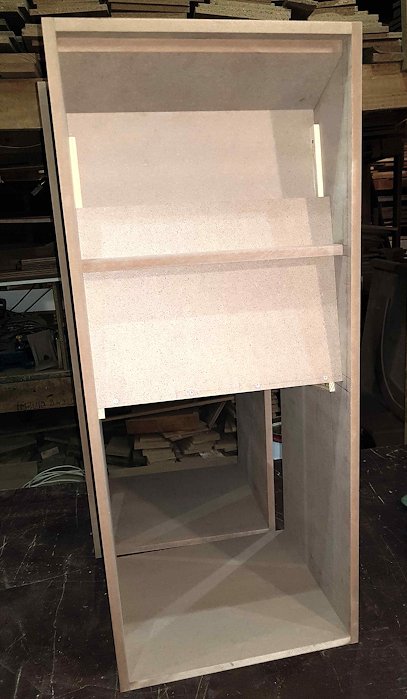 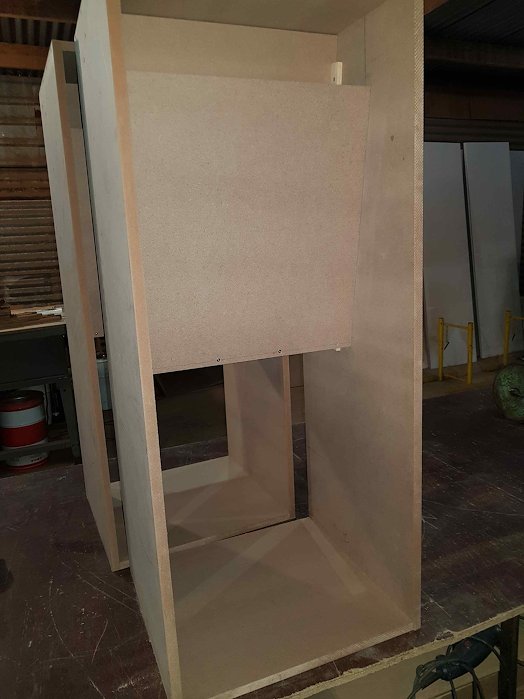 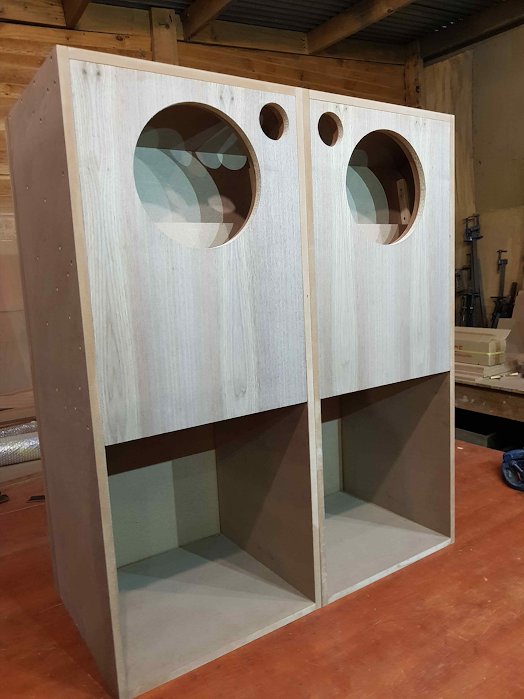 Interior from the front and rear. The picture on the right has an extra hole for the tweeter. These pictures are before adding the final 16 mm veneered panels. 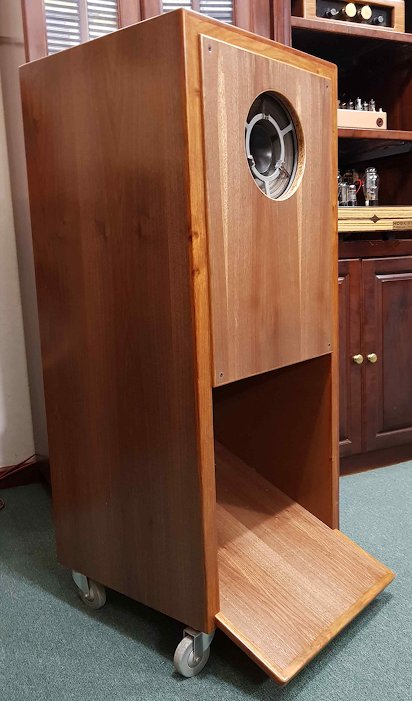 On the Left clad with veneered panels, tongue to help couple to the floor and ready for the Twin Axioms. Center and Right is the modified version with an additional speaker panel to adapt the slightly smaller Axiom 80. The set made up for the Twin Axioms did not have the protruding tongue as they were destined to stand in one place - mine had to have wheels as I need to move them from time to time. The look much nicer minus the tongue, but as they say "needs must when the devil drives!" There is no obvious difference in how the cabinets couple to the floor with both giving copious bass until the roll off point at 30 Hz. All exterior panels are made up of two 16 mm panels glued and screwed together. On the Twin Axiom version the speaker mounts from the outside against the 32 mm front as in the previous cabinets in Part 1 and 2. Due to having a third panel in the Axiom 80 "fix" the driver frame was rebated into the 32 mm front and a third 16 mm panel screwed on top hence the slight protrusion of that panel (Center).

What you get however is astonishingly realistic sound with tiny things not usually heard in the more normal speakers. And I'm not talking about being able to differentiate between gross things like ("Is it a Clarinet or Oboe in full orchestra" or "I can hear the the mixtures in the organ but can't hear when they break back"). The level of detail in the true sense, like being able to separate violins in ensemble or being able to hear that the brassy sound is a Cornet rather than a Trumpet, is usually beyond any normal speaker. Including a pair of Sound Lab electrostats I once owned. In fact these speakers (Axiom 80) are the closest thing I have heard to my Altec A7 clones here, although obviously they are not quite as powerful. They do however play more than loudly enough to give a convincing imitation of concert level for normal orchestra works, Jacques Lousier, Jazz at the Pawn Shop and the usual audiophile favorites are reproduced with aplomb. Listening to Guy Bovert playing a smalish organ the differences in intonation of each pipe is easily heard likewise each small adjustment to the swell shutters.

If one ignores the drivers abilities and concentrate on the cabinets one begins to appreciate that they are a marvelous bit of design by Coral and my tweaking by making the horn mouth larger seems to have helped. Keep in mind that a piano's bottom note has a 28 Hz fundamental tone and this is reproduced well. The cabinet as built does not have any extraneous resonances or colorations and because it is horn loaded, efficient. My listening room is 64 sq. meters and all of the iterations of this cabinet fill this space with no effort. That the internal dimensions are correct is evidenced by only tiny cone movements even when pushing hard even with a driver with no surround (seal) between the front and back. Unless you regularly play bass heavy music you won't need a sub.