Is this where I get felt? 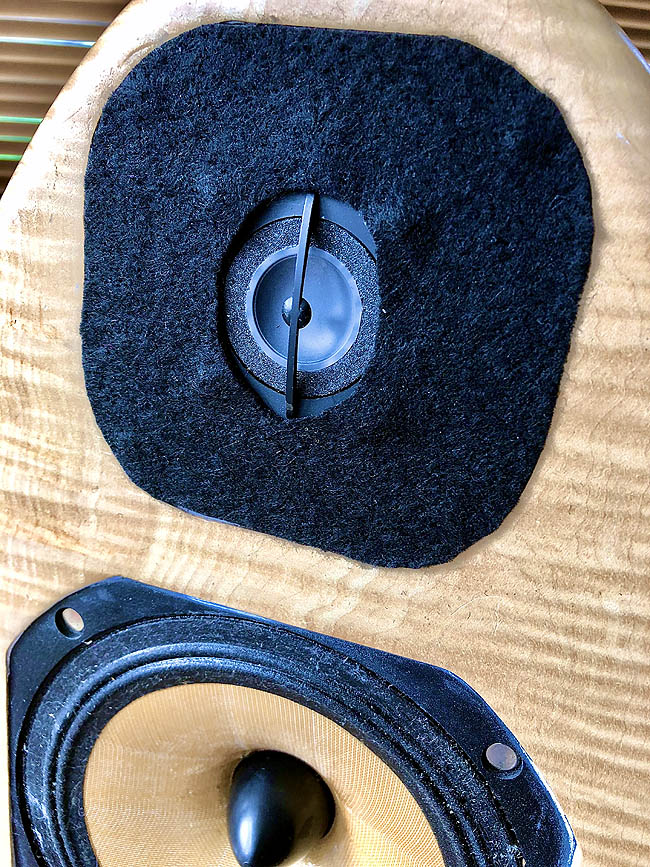 The in-room response of most loudspeakers bears scant resemblance to the published frequency response curve at any volume. Whether passive crossover or active crossover, or even angle full-range driver, the dispersion characteristics of each driver (except dipole panel loudspeakers) will vary according to frequency. Hence, in any room except an anechoic chamber, the total sound energy will vary according to frequency, no matter how flat the on-axis response.

This is most obvious at the transitions between loudspeaker drivers. At every crossover point, the larger diaphragm lower range loudspeaker driver is likely to be beaming (dispersing more narrowly) where the smaller higher range driver will be dispersed more widely. Thus, even for a listener sitting on axis (at the apex of a triangle between the two loudspeakers, the sound energy being distributed throughout the room varies according to frequency. This is one of the reasons why in-room frequency response charts bear no resemblance to the lovely accurate plots measured in anechoic chambers.

It is a truth universally acknowledged, that a tweeter in possession of a good dispersion characteristic, is in search of a good environment. The short wavelengths of high frequencies are more prone to destructive interference from early reflections than the lower frequency wavefronts.

Your Old Scribe has returned to an all active 3 way set up, finally completing the mid-treble modules of a system your Old Scribe designed & bought most of the components for in 1993. Your Old Scribe was firmly reminded of this truth, universally acknowledged, that wider high frequency dispersion brings its own problems.

Three sets of the previous tweeters in this listening had been horns chosen for their 90° dispersion characteristic to match the 305mm Hammer bass driver (helped by a whizzer cone to 7kHz), and a fourth, the Heil Air Motion tweeter has a figure of eight dispersion pattern. The active mid-top satellites feature the splendid Focal inverted titanium dioxide dome TD120TDX tweeters now installed in 15° back tilted fiddleback sycamore baffles. The dispersion of these inverted domes is much wider than 45° and falls evenly off axis rather than an even wavefront distribution within a tightly defined 90° imaginary cone. The Focal TD120TDX May fall off significantly even by 30° off-axis (i.e. a 60° included dispersion) in the last octave 10kHz-20kHz but below 7kHz (the crossover frequency for the preceding Hammer Dynamics 12 whizzer cone equipped bass-mid driver) the <>Focal<> <>TD120TDX<> disperse right across the baffle, if somewhat attenuated.

Running frequency sweeps indicated audible warbling like kid's generic birdsong warbler pipes throughout the tweeter bandwidth (2400Hz up). With repeated trials, adjusting loudspeaker or listener position clarified certain problems. Some of the warbling changed frequency with changing position, while some remained constant. The warble changes indicate a room problem while the warble constancy implies a driver or system problem. The driver terminal voltage does not fluctuate, suggesting all these effects are downstream.

Received wisdom is to apply 50mm acoustic absorption foam to the points on walls and ceiling where a direct reflection occurs and thick rug(s) at the points when Purchasing some additional inexpensive 50mm (good to below 2kHz) foam absorption proved frustrating as the sticky pads designed not to damage paintwork seemed also designed not to support acoustic foam on the ceiling! The position dependent frequency sweep warbling was only slightly ameliorated and the unvarying warbling was completely unaffected. 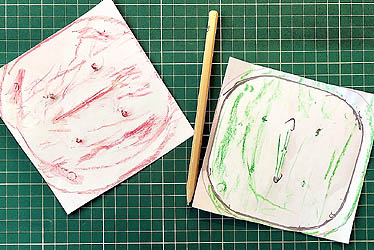 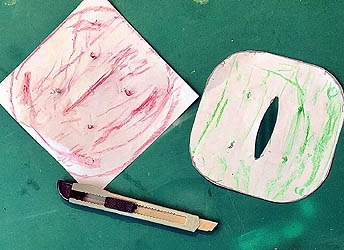 The Focal TD120TDX driver features a front mounted phase plug. This particular pair were prototypes for evaluation, particularly of the new phase plug, and that evaluation indicated in 1993 that the phase plug was of particular benefit on axis but of less effect vertically off-axis. However, as well as the aluminium phase plug, the front plate also features 4 prominent screws (holding the magnet in place) and a slight radiused baffle rebate edge less than 2mm. Several high-end OEM users (including Wilson and Russ Andrews) of the Focal TD120 family (from the early fibreglass inverted dome models, including the Kevlar, titanium and titanium dioxide models) have employed various attempts to drag the last microgram of performance from them. Felt front dispersion control devices have been employed even though Focal themselves have always used these tweeters naked.

Creating felt front sheets for the Focal TD120TDX required some imagination, some paper & wax crayons, a sharp pencil, small sharp scissors, a scalpel and some black felt. Choice of the latter could be significant. Thin compressed felt of the turntable mat variety will affect different frequencies than fluffy thicker felt.

Trying strips of thin felt vs thicker looser felt (c1.7mm vs nearly 3mm) indicated the latter worth trying first. The pictures illustrate the process of creating an accurate template. Wax crayon and brass-rubbing method offers a starting point, given that this is going to involve soft fabric and scissors, not a CNC template. 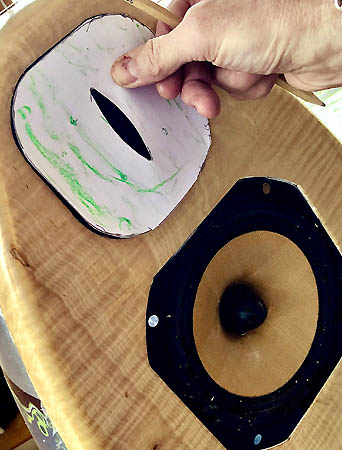 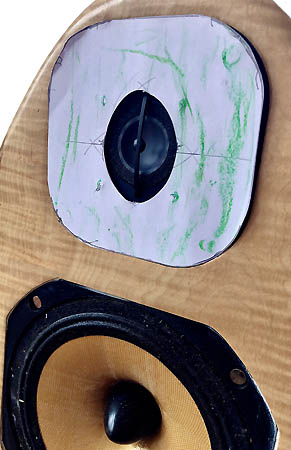 Cutting the first draft from cartridge paper begins a journey of considering how best to create an aperture that reduces the number of equal distances from the edge to the orifice window to the tweeter suspension-dome join and to the tweeter centre. Felt circles should be avoided due to the constant equal distance from the acoustic centre (Olsen & May found this in the ‘50s). An ellipse offers the most regular shape although a star shape has been chosen by some manufacturers of aftermarket tweeter waveguides.

Once the felt waveguides/wave traps are made, they can be installed with solvent-free rubber solution type adhesive. The advantage of this is two-fold: the lack of solvent minimizes damage to any adhesives or finishes elsewhere in the system and the rubber solution can harmlessly be rubbed off if changes are needed.

Running frequency sweeps demonstrated that the system warbles are now completely absent. On-axis and off-axis frequency response is much more even, and seems to be extended (before breakup) both audibly and by measurement. One hypothesis is that what looked and sounded like the ragged chaos of tweeter breakup (ALL domes break up, the difference is when & how, not if) was actually the effects of local reflections from screw heads, flange edge, rebate edge. The extra room treatment was now more effective with the positional artefacts, although the LEDR Test was still inferior to the 90° compression driver/horn options, due to their reduced room coverage eliminating some early reflections.

Ambience soundstage becomes much clearer and the scale grows when the felt is fitted. Listening to Gil Scott Heron, the deep humanity communicated in his voice now sounding less like HiFi or PA but like he's in the room. This man feels others' pain as his own, obvious from the inflections in his voice, hence his tragic need to anaesthetise recreationally.

The Stevie Wonder 12" EP ‘Hotter than July' second track Do Like You infant voices would have listeners rushing for the baby monitor. Listening to Steve Hillage's album series: L; Green; Fish Rising; and Motivation Radio before and after tweeter felt application was like hearing a better stylus profile. The Stranglers, Rattus Norvegicus, demonstrates great close ambience from the miked Leslie cabinets, and clear percussive edges to cymbals and pick noise.

"The Old Scribe has been at the felt too much recently," muse the Plebs chorus, stage left

For under 1€ (less than a quid or a buck) this is worth the risk. It can not sound any worse but it might improve the treble. If it has any positive effect at all, no matter how tiny, for this money it represents excellent value and is removable.