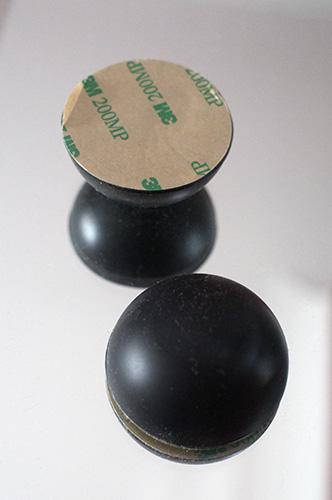 For half a century, audiophiles have been trying to mitigate the effects of vibration on music reproduction equipment. For many years this was by suspension using springs or by foam rubber and tarred felt (from building construction materials) until, first spikes and then materials with more complex deformation behaviour than Hooke's Law began to be developed. Bright Star IsoNodes came from the latter tradition and a part of a family of BrightStar vibration control products climbing to price points equivalent to prime components. Your Old Scribe has long held that vibration control has more effect than cables and that consequently, money spent on vibration control is much more cost effective than fancy bits of wire. Furthermore, the science behind vibration control often holds up better under scrutiny than the pseudoscience regurgitated by purveyors of audio cables.

The modified Assemblage SET300B weighs in at 22.5kg. When the standard Bright Star IsoNodes were tried under the this magnificent single ended triode amplifier, the specification suggested that five should be sufficient. However, the best results were obtained with seven standard IsoNodes distributed under the base at critical points. The main load is at the back where the mains and output transformers lurk, so five of the IsoNodes are positioned under them. The other two were most effective two-thirds of the way forward where the base is at its most unsupported. This combination beats the already upgraded EAR feet fitted to this amplifier in place of its original instrument feet. The already sublime midrange and sweet treble from NOS valves (tubes) and carefully selected upgraded passive components gains further clarity and the slight reduction in haze at the highest frequencies also improves timing and soundstage depth.

The Extra Large Bright Star IsoNodes, rated up to 27.2kg were tried with four under the modified Assemblage SET300B. Three positioned near the rear beneath the transformers and one about two-thirds towards the front centre. Testing the bounce, like a suspended subchassis turntable is a waste of time because IsoNodes are not springs and do not oscillate. This arrangement was as much of an improvement over the EAR feet (which had been in turn much better than the stock instrument feet) as seven standard sized IsoNodes. There was no consistent difference between seven standard sized IsoNodes and four Extra Large BrightStar IsoNodes under the SET300B.

The same comparison was made under the Canor Precision Tube Amplifier TP106 VR+ with identical results. An even greater improvement over the stock feet but very little difference between four Extra Large Bright Star IsoNodes and seven standard sized IsoNodes. With valve amplifiers, products like IsoNodes aim to achieve improved accuracy, but some listeners prefer a particular sound, even though this is colouration; for those listeners, exotic wood tuning devices like the various Yamamoto ebony products. 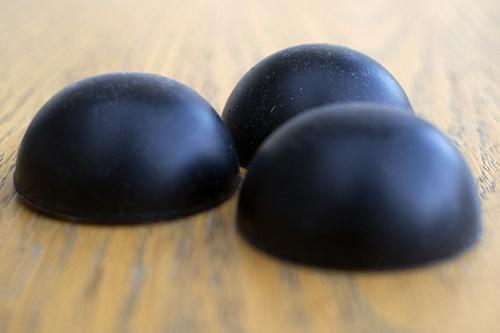 Having said that, to compare the two sizes without confounding factors, I tried both types under the modified Shanling CDT100C and the Avondale Audio AAA5 CD players. Under the Shanling, three Extra Large IsoNodes were better than five standard IsoNodes. There was greater clarity in midrange and treble, better bass definition and a larger sound-stage. Beneath the lightweight Avondale Audio AAA5, which had to be loaded with extra mass to be heavy enough for IsoNodes to work, Six distributed standard IsoNodes were much better at controlling the clingy steel casework than three Extra Large IsoNodes

In the original test series, the one place where I had less success with the standard sized IsoNodes was with suspended subchassis turntables. This time a Garrard 401 with SME3012 series I installed in a '70s plinth with a sand-filled birch-ply subchassis suspended from Pirelli webbing from an outer plinth of veneered chipboard. As 401 plinths go, it is better than most wood plinths. Inserting four Extra Large Bright Star IsoNodes in each plinth corner was not enough even though the subchassis weighs ‘only' 17.5kg. Removing the Pirelli webbing and adding an extra IsoNode below the motor improved things even further. It took careful shimming of the height of the IsoNode under the motor. With careful adjustment, this massive motor could be quieted, reducing the motor noise component of the rumble. However, too much support affected PRaT while too little had no effect. A standard IsoNode under the platter bearing made no audible difference. Whole businesses are built on selling tuning goodies, pattern parts and upgrades for these venerable turntable motor units (they have neither pick-up arm nor armboard), which date back to 'Black Knight Rumblecure' in the old HiFi Yearbooks of the early 60s. This is evidence for both the potential of these old turntables and for their commonly identified pitfalls. The Extra Large Bright Star IsoNodes can now be added to that list.

The Extra Large Bright Star IsoNodes do exactly what they promise: more of the same for bigger components. Of the purely blobby vibration control devices they remain the best I have heard.

I was interested in the IsoNodes for three reasons. I have a kit built amplifier that works really well but has a low level mechanical hum from one of the transformers. I wanted to see if the Isonodes could absorb any of the hum. Secondly I have an, admittedly seldom used, Rega Planar 3 and I was interested to see how they worked with that. Finally, I was curious about the product itself and its similarity to generic silicone "blobs" on the market for other purposes.

First up was my humming amplifier problem. To cut a long story short, the extra large IsoNodes, one under each corner, did make quite a difference. From Mark's extensive analysis, I guess the Isonodes absord some of the vibrational energy and convert it to heat rather than creating a sound. It didn't solve the problem altogether but it probably reduced the hum by 50 per cent taking it down below ambient noise levels most of the time.

Next up was the Rega. I put one of the large IsoNodes under each of its three feet and tried a quick A/B. I like Bob Marley's classic album Exodus as a test for bass. The opening track, Natural Mystic, is underpinned by a great bass guitar but it has always sounded a bit boomy on record. The first thing I noticed with the IsoNodes in place was that the bass was tighter, with a bit more detail in the sound of the bass strings. There could have been some improvement in the imaging as well but I wasn't sure. I ran through a few albums repeating the test. I enjoyed the tightening of the bass again, for example, in the famous bass guitar playing on Paul Simon's Graceland album. That album also showed an improvement in imaging and low level detail. I enjoyed an old Paul Brady album, Back to the Centre, which seemed to have a little more sparkle with the vibration control in place. I did also try the IsoNodes under my Marantz SACD/DAC and Cambridge Audio 851A integrated. Although I didn't test the combinations extensively I did think the fully supported system sounded a little better than my previous attempts using halved squash balls and the like. The complexity of changing the supports and the brevity of my aural memory preculdes me doing reliable testing of the effects on digital electronics. Thankfully Mark has the patience of a saint and has done the work for us in his analyses!

Finally, I got hold of a pack of visually identical generic sorbothane hemispheres and tried these in comparison to some of the smaller IsoNodes. I hadn't realised at the time that Mark had included similar blobs in his earlier test. Although I did't try different compliances of generic sorbothane, I found the blobs I'd bought decomposed to a flattened shape in use whereas the Isonodes held up better under the weight and retained their springiness. I checked back with the manufacturer who confirmed, unambiguousy, that his product is unique in its blend of materials.

The bottom line is that my findings supported Mark's. This seems a good product at, as these things go, a reasonable price.

We at Bright Star Audio would like to thank Mark Wheeler and Andy Norman for writing and Lucio Cadeddu for publishing the wonderful review of our IsoNode anti vibration feet. Mark had originally reviewed the IsoNodes in TNT-Audio over ten years ago and now, after his exhaustive vibration control study, we are very proud he has concluded that “They remain the best I have heard”.

Bright Star is considered one of the pioneers of vibration control for high end audio as we created our first products in 1985 and then introduced them achieving great critical acclaim. The IsoNode feet were conceived by us to provide high quality vibration control at a very affordable price. They have gone on to win many prestigious honors and awards including Product Of The Year, Accessory Of The Year, Recommended Component Of The Year and many more. The IsoNodes are a consistent favorite of reviewers and audiophiles alike with customers typically commenting “The IsoNode feet made a bigger sonic difference than my last component or accessory upgrade – at a far lower cost!”

We offer three different size IsoNode feet to accommodate any component or shelf situation. They are extremely affordable starting at only $14.99 per set of four feet with free shipping in the USA and discounted international shipping available at our web store. You can easily add extra IsoNode feet to support a component above the optimum weight rating or you can put two IsoNodes back-to-back creating an “IsoSphere” to increase the load weight capability. If height is an issue, such as with a speaker, you can use more of a smaller size IsoNode. The IsoNodes are also included as the support feet for our IsoRock anti vibration platforms. We are happy to provide recommendations or answer any questions - please contact us by email at info@brightstaraudio.com.

The IsoNode is perfectly suited to control vibration in audio, video and other electronic components. We have specifically formulated the IsoNode material for this exact purpose - it is not “borrowed” from some other industry (air conditioning, plumbing, sports, etc.) and they are made from our exclusive and proprietary high-tech polymer compound in our commissioned factory. No other products use this material or perform to level of authentic IsoNode feet.

Thanks again to Mark, Andy and Lucio at TNT-Audio.

Barry A. Kohan
President
Bright Star Audio / IsoNode
Please visit us at www.brightstaraudio.com
IsoNode® is a registered trademark of Bright Star Audio and cannot be used without our permission.