Driver Air Volume Acceleration 'Γ.a'
How to calculate and use it

In part V we contemplated the possibility to gain some insight into driver resolution from the Thiele Small parameters. Having already argued that music making is paramount and therefore the primacy of effective conversion of electricity follows in part 1, we must now contemplate what else we might derive from this figure, and further derivatives. Sales blurb offers us vague philosophical hints as we see (but not yet hear) in part 4, but there are still more facets we may expose from the literature. And remember, if manufacturers do not provide you with comprehensive specifications, do not provide them with your money.

We calculated motor acceleration in part V but the figure we derived only served to suggest how quickly the cone will shift from a standing start. It is like knowing the 0-100kmh figures for a vehicle but not knowing if it is a lightweight motorcycle or a large van. The quantity of air we can move defines the dynamics of the driver.

"Not the dreaded motoring analogy," complain plebs, at stage left, "He'll be joining those other Hi-Fi sybarites going on about fancy wristwatches next. Get on with speaker talk!"


OK, its simple. Just multiply the motor acceleration by the effective cone area of the driver.

It really is that simple. Most quality drivers fall between Γ.a=7 and Γ.a=15. Trying a selection of driver pairs where the drivers are similar in most respects except Γ.a produced consistent results. Higher Γ.a equals more dynamic contrast.

"Hang on a mo..." challenge plebs, from stage left, "That's just an expression for relative efficiency, isn't it?"


It is related to efficiency if all other things are equal, hence a tendency for more efficient speakers usually to sound more dynamic than less efficient speakers. However, there are numerous other considerations to efficiency, including various frictional components of the system (which one could model as resistors in an electrical analogy so you understand the relevance to efficiency) and compliance of spider and cone surround, not to mention non-linear behaviours of the cone area itself.


Stop calling me Shirley. The equation only holds for the frequencies that the cone reproduces pistonically. As soon as the cone begins to break up (usually designed to extend the upper frequency limit) both the acceleration Γ and the air volume acceleration Γ.a become irrelevant. It is still useful data when shopping for drivers.

I have tried drivers with Γ.a as high as 20 and they excel with dynamics. Indeed the manufacturer of one such driver advertised it as possessing "Shocking dynamics". I have tried similar sized drivers from the same manufacturer with different cone mass and magnet circuit configurations designed to meet the needs of designers specifying for very different bass alignments, and the results are consistent. Dynamics are proportional to Γ.a and typical ball-park figures are Γ.a between 9 and 15 for successful drivers of any dynamic pretensions, but that those above 15 develop macro-dynamics noticeable more agile. However, there are often other compromises, such as the large diameter ultra-light cones often associated with high Γ.a also produce too much colouration for nearfield domestic hifi. 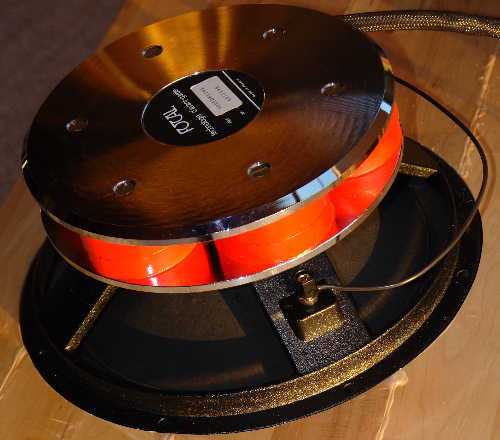 How does this help us, the home designer/constructor?


Yes, o scribe! What can we do with this information? enquire respectful plebs, stage left.
Well, experiments with multiple driver systems demonstrated to me that in a 3-way system (for example) all three drivers should be within a similar ball-park figure for Γ.a

When one driver is more than 50% higher than its neighbour the integration seems to collapse. The more dynamic driver seems to lead the timing. A tweeter with Γ.a=14 crossed with a bass-mid Γ.a=7 was very difficult to integrate such that even when phase was correct at crossover the tweeter seemed to lead the timing of the whole system. The problem could only be slightly ameliorated by adding a delay network to the crossover to create a 90° lag to the tweeter; thus even though it was technically less accurate it sounded better. It was still not good enough though and another tweeter was chosen to match that bass-mid driver.

The problem is as bad at a typical 400Hz crossover between bass driver and midrange unit in a big 3-way system. Here it is rhythm that suffers though, and spotlighting of individual instruments in dense orchestration or complex mixes. Higher bass Γ.a (e.g. Γ.a=15 in a 250mm driver) and lower midrange Γ.a (e.g. Γ.a=7 in a 110mm driver - real examples) sounded lively but confused. The opposite condition of a high Γ.a bass driver (200mm Γ.a=7) crossed over with a moderate Γ.a midrange (165mm Γ.a=20) sounded sluggish with turgid rhythm. Both test situations used the same stereo power amp (Naim NAP110) to drive from a 400Hz 4th order active crossover and all drivers were capable of flat response operation at least two octaves beyond the crossover.

We noticed how dramatic the range of driver accelerations can be in part V, but the range is far smaller for air volume acceleration. This is because the larger cone area is inevitably at the cost of greater cone mass, for a given material, so the proportional correlation tends to lead to the larger area cancelling the higher mass and vice-versa. Thus, within a manufacturers range it is usually possible to choose different sized drivers for different frequency bands having similar cone materials and similar air volume acceleration.

Just like last time, we can learn far more about a driver's potential from Thiele Small parameters than just what bass alignment to employ. We can discover how much whump we'll get for our Euro (which is not the same as how much bang for a buck - that would be efficiency per dollar or some kind of bestial practice unbecoming of these pages).

It's possible to apply numbers to one aspect of system integration, removing a whole cycle of suck it and see that would have necessitated expensive purchases and much time.

In our compromises when choosing drivers for a project we can now balance dynamics against our other priorities in a meaningful way. Being better informed has got to make us better designers.