This is a variation of a simple shunt regulator design that has been floating around on the net. It is a unity-gain (thanks to the feedback through C1) amplifier that consists of gain-element Q1 and follower Q2. In this particular instance the open-loop gain of Q1 is enhanced beyond the ordinary by the large-valued resistor R3, coupled to the intermediate 15V supply voltage found between droppers R2 and R10. This excess gain serves in reducing the closed loop output impedance of this regulator to a low 50 mOhms, right out to 1MHz. Alternative schemes are possible that give even more open-loop gain, namely using an active load for Q1. Running at these gains may necessitate some form of compensation to keep the circuit stable: indeed one of my four implementations breaks into mild (*) oscillation once in a while, unless 22pF is present between Q1's collector and ground.

As could be expected, noise is as low as that of the filtered zener follower, and it remains so entirely regardless of the presence or size of the output capacitor. The mains-related harmonics of 100Hz are also gone.

Batteries have a reputation for being perfect audio power supplies. Well, let's put that to the test! By way of quick hack several batteries were wired in the test amplifier's positive supply (pink traces in the plots). For reference the bypassed LM337 was used for the negative supply (blue traces).

The top plot is a 9V alkaline battery, used without output capacitor, and the bottom plot is same, now with a 220uF ZL cap. The results are pretty good and almost on a par with the two zener-filtered active supplies. There is a drawback: this being a non-rechargeable battery the cost of operation may be high, altough this never inhibited Japanese high-end manufacturer Final from releasing a range of phono, pre and power amps running off non-rechargeables.

But that's what we have NiCd for, not?

Not, indeed: the nickle-cadmium's output noise is considerably higher than the alkaline's, especially in the lower regions. (This without output capacitor).

For some reason I then measured the same again, and found above spectrum: different from the first one. Ah, so NiCds don't even remain stable in time.

And then I measured once again, upping the load current from 10mA to 35mA.

Finally added a 220uF cap. All of this is very suspect, so let's have a look at the recorded waveform of the battery's output voltage:

The above sample is entirely representative: there is a constant noise floor, interspersed with sudden transients and slow recovery afterwards. 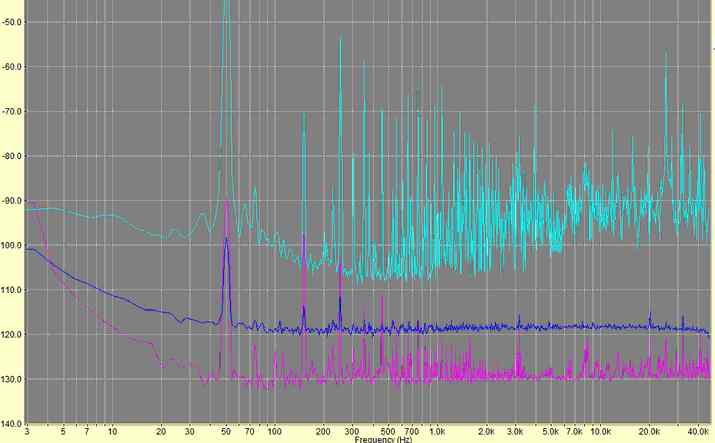 I haven't got any lead-acid accus, but above plot was kindly donated by a fellow DIYer ALW (the originals can be found here). Keep in mind that the test setup differed from mine, hence the results can not be compared to above noise measurements. The unloaded battery noise is the pink plot. It is indeed 10dB lower than the blue trace, which was made off a discrete low-noise regulator. However, increasing load current to 35 mA yields the light blue trace for the battery: at least 20dB worse than the regulator!