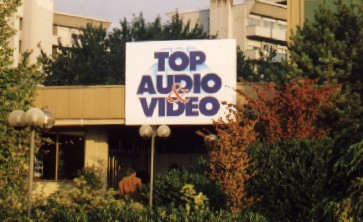 First of all, let me spend two words to explain why this reportage arrives so late (the Show was in September, now it's December :-(, late...isn't it? ).
The World Wide Web is a wonderful media, very powerful and "fast". I believe one shouldn't think "speed" is everything, at least when related to publishing informations on the WWW :-) Let me explain why.
We are an online only mag so, perhaps, we could produce a sort of "live reportage", exactly like the excellent one Steven Rochlin publishes every year. It would cost us a lot of work (and we are lazy guys) just to publish something which could be very close (and probably WORSE) than the one by Steven. It could be a bad carbon copy.
Furthermore, this year, thanks to the collaboration between APAF (the organizers of the Show) and the magazine AF Digitale, another "live coverage" of the Italian fair was available on the Net. They have spent a lot of time, money and human resources to produce kinda of "live act" from the Top Audio in Milan. An excellent work, impossible to beat or imitate, for us.

So what's left? The answer is an easy one: TIME. Yes, time to ponder, elaborate, evaluate and WRITE. Yes, do we really need another coverage with tons of good pictures with a line of comment? Sure we don't. So let us try to offer you a different point of view, a more relaxed perspective, with lots of texts and few - hopefully meaningful and interesting - selected images.

Let me tell you how my TAV 2000 reportage began. While in the airport, my bag caused more than one problem to the metal detector and the security personnel there. Yes, besides cameras, notes and CD's I had put a larger-tnan-life TNT TTS twisted mains cable plus several spikes of various forms and materials. So, as my bag crossed the metal-detector and X-ray inspection device at the airport, a guy of the security suddenly stopped me and started to ask embarassing questions such as: I've seen several strange things inside your bag, may you open it, sir?
Bang! He got me! Yes, SIR! I loudly and promptly replied (imagine Tom Cruise in a Top Gun scene... :-)
Hey, what's that? the official said, pointing his finger on the TNT-TTS cable. Uh, err....a cable, nothing else... was my reply.
I see... was the answer but then ...and what about those metallic pointed things? They seem bullets.... Oh my, this is going to be difficult, I thought. These are...ehm...s-s-s-spikes.... I whispered, then promptly added ...electronic components, you know...sir!
My lucky star might have helped here, since the guy with the gun seemed convinced and reassured. You can just imagine the faces of those who where waiting for boarding into my same flight :-0
Oh yes, I tried to reassure 'em with one of my most embarassed smiles.

In the meanwhile I had started to think about how crazy this weird hobby called HiFi may appear to common people. All those strange components, weird and huge cables, magic liquids and potions...and, first of all, all those STRANGE guys called audiophiles....YES, our small World must appear STRANGE...from the outside (OK, it often appears strange even from the inside, let me tell ya). So strange that the usual and most important HiFi Fair in Italy is becoming - year after year - more and more Video and HT oriented.
Yes, Audio-only rooms were available but ALMOST any room was displaying a TV screen (or video projector) between the loudspeakers. Even Sonus Faber (hear hear!) was demoing a full-fledged Home Theater system (the new "Home series" of the "Concerto" line).
You may imagine the comments from die-hard audiophiles: Naaa, can't believe that...there's a TV screen even into the Sonus Faber room! So...what's next? A Ferrari pick-up truck with diesel engine????

Dudes and dudettes, that's how the market goes! Home Theater in full force, the rest is history, more or less. Nothing to complain here, considering the Home Theater "trend" is bringing new life (and money and customers) to HiFi Companies, suffering from a long crisis.
If so, Viva il Cinema in casa!. But! We are a mere HiFi publication - don't forget our motto HiFi, nothing else! - so I'm sure you'll forgive us if we don't devote a SINGLE pic or comment to the AudioVideo rooms of this year 2000 edition of the milanese Top Audio & Video fair.

So, let's talk about audio only. New digital formats are all the rage today. Legions of audiophiles are ready to fight one against the other to defend their faith in the superiority of the SACD or of the DVD-Audio. Oh yes, there were several "head to head" comparison tests, here and there at the Top Audio...but we always were far when these happened ;-)
Roughly speaking, we have had enough of this BS, so we simply don't care about new digital formats, UNTIL a clear winner will pop up.

Of course we all want a better source for our HiFi (but we keep upgrading our tuntables... ;-) ) but definitely not another "perfect forever media". We have had enough of "perfection" during the years of the Compact Disc. We want something reliable and possibly not more expensive than the already notorious CD (25$/each here in Italy).
So, when the big boys from the big Companies will stop playing around and finally come to an agreement, we will be ready to test their wonderful machines and discs. Before than that, it is a simple waste of time.
Yeah, we know we tested the DVD-Video with 24/96 audio in the past but at that time it seemed that one was the format doomed to replace the CD. Now the situation is sooo damn confused that we prefer to spend our time listening to LPs and CDs. Or, dare I say it, LIVE Music, as audiophiles normally don't listen to it enough.

Vinyl? Right, vinyl. Was there vinyl at the Top Audio & Video 2000? You bet! Tons of it! And several excellent turntables to die for (Clearaudio, Vyger, Goldmund, Symphonic Line...). And people seemed very interested to hear what kind of sound a so old and imperfect media could still deliver.

Despite the fact vinyl is becoming hard to find - though several independent labels still print it - many young audiophiles are buying their first analog-playing device nowadays.
And you can be sure we at TNT-Audio will continuosly review analog stuff like turntables, arms, cartridges, phono preamps and will continue to suggest effective and fancy tweaks to improve your analog rig.
Recently, for example, we have reviewed the latest masterpiece from J. Michell, his hi-end TT Orbe. Other reviews will follow soon (a new KAB phono preamp, the Music Maker hi-end cartridge etc.)

So let me devote few comments and pictures to three outstanding turntables that were playing excellent tunes at the Italian fair. First of all the Symphonic Line hi-tech-ish turntable into the HiFi Center room. This incredible machine was playing LPs and leaving anyone astonished into the MBL system (hi-end utterly expensive jaw-dropping stuff from Germany).

Then, you may know that even we Italians, besides fast cars, nice clothes and wines, make pretty good turntables. Morsiani, for example (please read the Interview with Carlo Morsiani here on TNT-Audio), was demoing his top TT into the Sound of the Valve room, with a SET 1,5 watts amplifier driving a wall (called, guess what, The Wall) of 6 10" full-range drivers. A very strange set-up. If some of you have visited the Show you may have noticed the guy seated literally on the floor near the Morsiani turntable. That was Carlo Morsiani :-)

Then there was the new Indian Reference turntable from Vyger, a big, heavy, shiningly polished monument to vinyl playback science. The fully air-suspended turntable was giving its best thanks to Norma amplifiers and Relco Audio hybrid loudspeakers (ribbon tweeter + conventional woofer). This was an exclusive proudly Made in Italy room.

Finally, a wonderful (what else?) Goldmund Studio was playing into the ART HiFi room. IMHO, one of the sexiest turntables ever made. A squadron of Goldmund preamps and power amps was driving one of the most interesting and undoubtly revolutionary loudspeakers of the whole Show. I'm talking of the Audio Physic speakers that make use of the revolutionary Manger driver. Perhaps some of you aren't aware of what the Manger driver exactly is. Well, it is one of the most revolutionary concepts in electro-acoustics of the last, say, 50 years.
You will soon learn more about the Manger driver here on TNT-Audio but, just to excite your curiosity, I'd say it is a full-range driver that covers the frequency range between 80 (!!!!) and 33,000 Hz (!!!!!!!) with a claimed sensitivity of 90 dB/w/m.
It is not a "cone" driver, rather a three layered membrane that vibrates freely, without any kind of spring mechanism. Below 80 Hz the Manger driver needs to be coupled with a conventional woofer (sub-woofer, that is) but above that there's no crossover network, no cone break-ups, no "narrow-field" listening zone, no need for horn loading.
The Manger driver has been extensively used in recording studios (many of these located in Germany) inside Manger ZeroBoxes, another pretty new concept in cabinet design.
Also, they are available as aftermarket drivers for you die-hard DIYers! This hi-technology doesn't come cheap, though we are still far from certain outrageously high prices of traditional cone full (???) range drivers that are all the rage today.
Two versions are available: the low sensitivity one, with 84 dB and a list price of 800 Euro/$ (pair excl. VAT) and the high sensitivity model, with a neodimium magnet and 90 dB/w/m, for a list price of 1,100 Euro /$ (pair excl. VAT).

This was one of the main novelties of the Top Audio & Video 2000 and it is a pity it hasn't been cited by other HiFi magazines. Sometimes, when in a hurry, one forgets the most important things ;-)
This is a REAL revolution, not the silly SACD/DVD battle, not the 50 years old technology displayed as absolute novelty (I'm referring to SETs and full-range horn-loaded speakers).

If you want to learn more about the Manger innovative concept, please visit their Official Site and/or stay tuned with your TNT-Audio for an upcoming Interview with the designers and hopefully some interesting listening test. 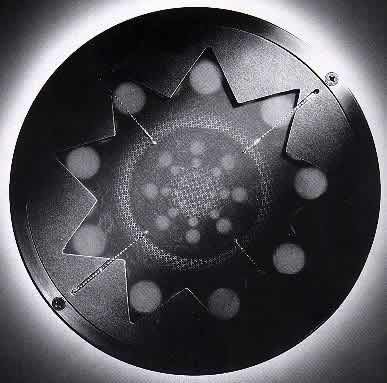 This first part of the Top Audio & Video 2000 reportage from Milan stops here but stay tuned on our URL for a second part low on fat and rich in content with pretty exciting REAL news, not hype.