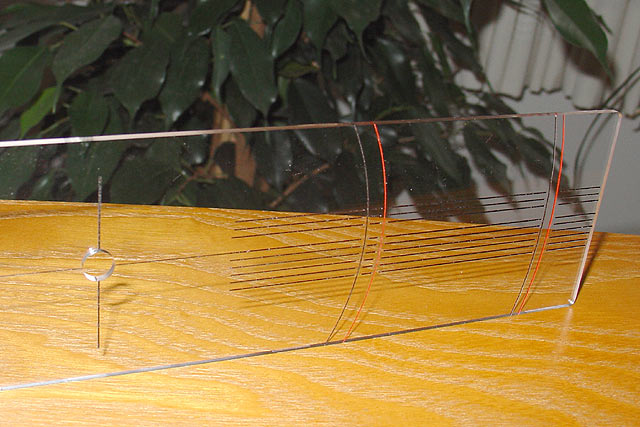 
You may remember that some while ago I got enamoured with the idea and concept behind the Schoen tonearm protractor. To re-cap, this is a standard 2-point protractor built to be used with a lead pencil taped to the (square) front of the cartridge. The alignment happens to the longish pencil, which is a lot easier than trying to see the cantilever (assuming, of course, that cartridge body, cantilever, and stylus all are square to each other). This product would have been a god-sent if not for its lacking manufacturing quality: the part was warped and the spindle hole was sufficiently off-center to make a mockery of the whole alignment procedure. I tried modifying the template for better accuracy, which was only a partial success...

But this is the 21st century, and nothing is truly impossible anymore. Enter company Schaeffer in Berlin: a mechanical workshop with a web-based front-end. Let me explain: Schaeffer are specialised in custom-made frontpanels for industrial and hobbyist applications. They offer a rather crude but workable CAD program for designing simple frontpanels. This software, Frontpanel Designer, can be downloaded (for free), is easy to learn, and it allows anyone to draft a decent-looking frontpanel, specify materials (aluminium or perspex), engravings, and colourings, and then submit it to Schaeffer for manufacturing. This can be from one piece and up, and turnaround is a couple of weeks, no more. This formula proved so successful that a subsidiary was opened in the USA, trading under the name Frontpanel Express.

Now back to our subject: what is an alignment protractor other than a flat shape with holes? Just as ... a frontpanel. Would Schaeffer's combination of software and CNC machines allow me to make a protractor with the required accuracy?

So I set out to design my own one, according to the Schoen philosophy but with null points tailored to my needs: a couple at 63.6mm and 119.5 mm (for my SME IV), and a couple at 70.8mm and 123.5mm (see the Schoen article for an explanation). I had it duly processed and after some waiting my very own protractor was here for about 70 euros total (remember: the Schoen costs 50 euro). It happened to be perfectly flat (unlike any other protractor I've ever used) and of fine precision and execution, even if the grooves for the stylus are slightly too wide (a limitation of the minimal-size cutter Schaeffer employ). Once put on a piece of white paper to aid visibility, the protractor was an absolute joy in use. I found the offset alignment of my SME to be some 0.3 mm off, the new protractor allowing me to improve with ease on the tedious and coarse eyeball-it- from-above method prescribed by SME themselves. 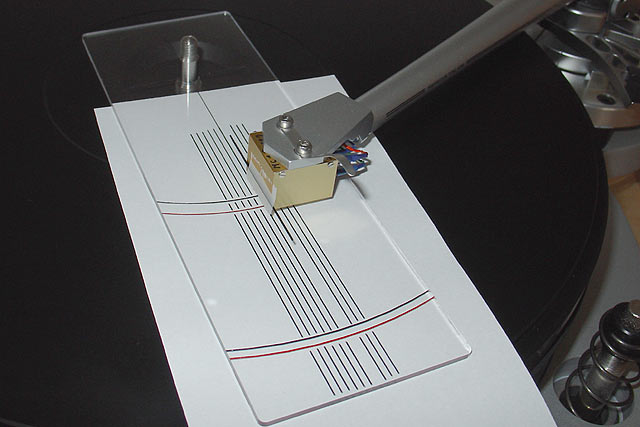 Since I'm so happy with the results I'm more than willing to share the design with you (as-is, all disclaimers apply). You can download the CAD file, read it into Frontpanel Designer, modify it if you want, and then submit it to Schaeffer. Enjoy! 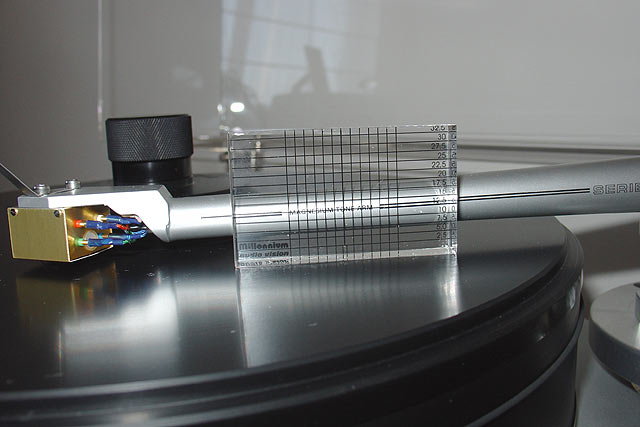 Something much in the same vein is the Millennium 'Block': a very well-made perspex piece sized 60 x 35 x 10 mm, with horizontal and vertical lines engraved on its back side. Put the Block on an LP, move the arm against it over its whole length (the block's), lower the armrest, and you read off the arm's angle relative to horizontal. Ideal for a quick and easy VTA reference. It works wonderfully with the SME with its painted-on horizontal guide lines, and it works well enough with slightly tapered arms like the Rega. It does not work well, however, with S- or J-shaped arms, as these lack a sufficiently long straight portion to push against the Block.

Likewise, (carefully!!!) moving the block against a lowered cartridge's front allows for inspection of the azimuth. In practice I find this method much easier and more accurate than any mirror-based one. So this is all in all a very useful tool for a reasonable cost. My only gripe is that I would have liked it to be 10-20 mm longer, for even better accuracy. 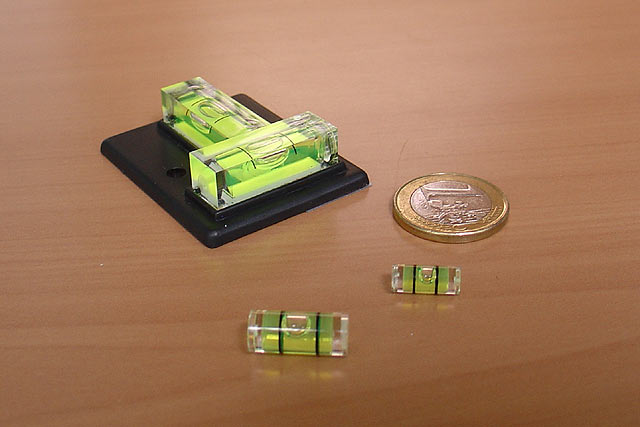 From the same manufacturer comes the 'Cross': a set of a small cross-shape 2-axis spirit level, meant for checking turntables and armboards, and two tiny levels, presumably meant for azimuth checking (put one on the headshell if you dare). All of these I found to be woefully inaccurate, the individuel spirit vials being off in one direction each time, and the plastic baseplate being just warped. These items look good at the first sight, but really aren't worth the money. Incidentally, it seems that the Cross originates from UK company Level Developments. Level Developments market a wide range of levels, right up to very advanced laser toys for engineers. Perhaps that their more upper-market offerings are better for precision turntable setup ...

You may know that I run a second GyroDec. It is an old MkII that I bought used in 1995 or so, when the launch of the Orbe flooded the market with Gyros of various ages. It served me well until I got a brand new MkV, after which it became a laboratory rat for all sorts of scary experiments. Last year I gave it a paintjob, fell in love with the new colour, ditched all of the scratched acrylic, subjected it to half of the Pedersen mods, and back in use it went. Its drive system is now a Maxon Re-Max DC motor mounted with sorbothane blocks on the subchassis itself (Pink Triangle-style, or like the Dual CS-5000 if you want). The Maxon is an expensive and fine item (though not significantly better than Michell's original motor). I use it with the '45' pulley exclusively, for less severe belt bending. The thing resides in a custom motor plate (made at, you'd guessed it, Schaeffer), dropped into a drilled-out Rega armboard. The resulting turntable sounds pretty awesome, though it is now Michell nor Pedersen. 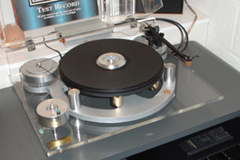 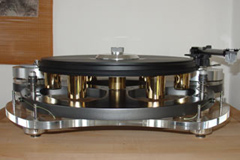 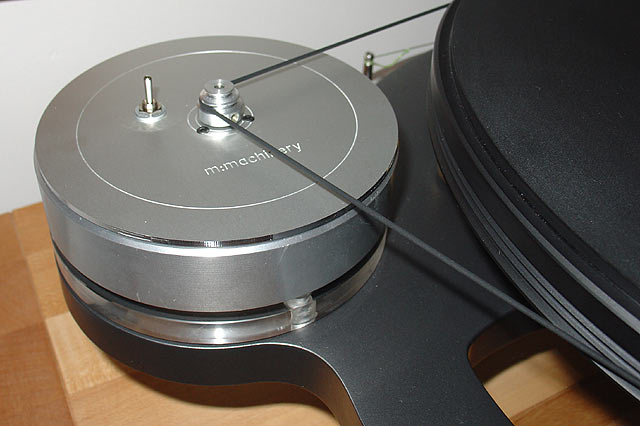 The juice is normally sourced from Michell's basic DC supply (note: used with a different motor, at a different voltage and current, at a different speed), while I am finishing my own design of supply. The Michell unit is bog-standard, comprising of a small transformer and bridge, one smoothing capacitor, and then an LM317 regulator. My own design will be an opamp-based series regulator with armature current feedback and a special frequency compensation for the belt + platter's main resonance. Its voltage reference will be very low noise, and the connection to the mains will be heavily RCRC-filtered. I have a rough prototype of said supply up and running, giving all of the functionality and perhaps half of the gains in noise performance.

Last week I was trying to measure short-term speed stability, playing one supply against the other. This failed, mostly due to the insufficient quality of the test record used (Analogue Productions, and this one is better than most current offerings on the market - a lot has been lost since the seventies' CBS, Shure, and various Japanese test records went out of print!). These measurements were done by recording (on a Tascam DV-RA1000) 1kHz and 3.15kHz mono tracks, submitting them later to off-line Fast Fourier analysis. Doing this I saw something remarkable: the more complex supply consistently measured a 2 to 3dB lower noise floor over most of the spectral band, from 300 Hz to over 10 kHz. This means that somehow the electrical noise of the supply, which is indeed wideband, translates through the motor (with its inertia) and the belt (with its filtering action, although remember that my specific motor is mounted on the subchassis) into mechanical noise of equally-wide bandwidth at the stylus tip. It wouldn't be totally unbelievable if it wasn't so clearly measured. And heard: don't most people who upgrade from, say, a wallwart to a Michell HR Never-Connected supply comment on the blacker silences and cleaner sound?