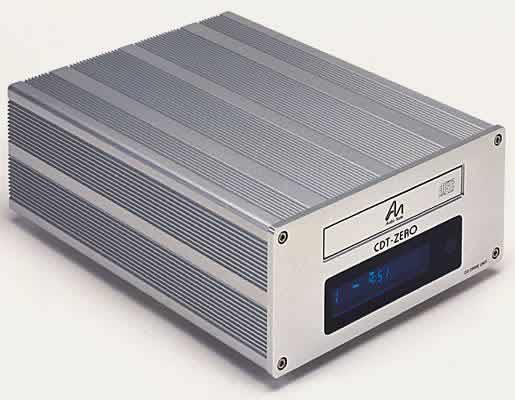 AudioNote are a famous company, but primarily they are famous for Single Ended (SE) amplifiers of awesome ability and staggering cost. I'm not sure if there's a "Guinness Book of Records" entry for the most expensive watt but if there is AN must be in the running. They also make stunning turntables and a range of speakers with the high efficiency SE amps demand.

To their credit AN also offer many of their designs as kits and Werner has already tested, and liked, their 1.1 zero oversampling DAC kit. Yes the kings of analogue make digital stuff as well, much of it very seriously high end...

In the last couple of years AN have also introduced a "budget" (for them) range of components - the Zero range - here I have two components from this series, the CDT-Zero transport and the DAC-1.1x

Ah! gone are the days when specialist British hi-fi came in tin boxes from Maplins (say he wiping a tear from his eye), now stuff has to be good and look it... In this case AN have chosen a very classy case made from a shoebox-sized, extruded aluminium box section, faced with a thick, machined aluminium plate. This sort of thing used to be reserved for big buck outfits. 20 years ago only one factory in Europe could make an alloy extrusion big enough for the Naim 250, now there are many all over the world making high class extrusions for everything from car chassis to conservatories to signposts, all eminently adaptable for electronics. The result is that the box shared by all the Zero range is extremely attractive and solid to boot...

The CDT caps its CD drawer with the same alloy and underneath is the clear display. Round the back is a phono digital out. There are no controls on the front of the machine, just an emergency "open/close" and "play" button on the back panel, everything being accessed from the remote. I'm not sure if Sony make a cheaper remote than this, but I'd be surprised if they did. The one that came with my wife's £75 Sony "ghetto blaster" being noticeably better laid out and better built to boot... All the functions and a numeric keypad are there, but they're all equal sized tiny rubber buttons. If you're going to build a machine that in some circumstances is inoperable without the remote (see below) then it ought to be a damn sight better than this especially on a £600 pound transport! For my feelings on this topic see "Remote Rant"

BUT... If you have access to the back of the machine, no racks or stacking for example, then reaching behind the transport the buttons fall easily to hand. The "play" is raised relative to the "open/close" and so paradoxically this transport is the easiest to use I've come across! I only ever use those two buttons anyway so for me it was perfect, easier even than the Caspian which is exemplary in this respect. However if you've no easy access to the rear then the combination of hopeless ergonomics and a cruddy remote may well put you off... And while I'm moaning the transport "twitters" more than most, this mechanical noise probably being more evident because of the relatively small alloy case, it's a very minor point but if your listening position has the electronics right by it it's loud enough to hear.

The DAC is in an identical box (there's a couple of valves in it... it's an AudioNote after all) save for the front which is adorned with just three LED' to show "unlock", power and "de emphasis". As I only understand what the middle one is for, I hope you'll forgive me if I now send those looking for a technical description to Werner's excellent review of the AN Kit. The two use similar circuits the main differences being as follows...

4.) The power supplies in the DAC Kit 1.1 is slightly better than in the DAC One.1x, this is a space issue more than anything

On the back panel is a switchable phono/balanced digital in and the usual phono's for the analogue output.

The pair look pretty next to each other (NOT stacked) though ideally they should be placed well apart to reduce interference.

Boy did I have problems with this... You see as usual I wired the thing up and left it on repeat for 24 hours before listening to it. Then came the surprise, a rather dull "slugged" sound with deep bass having a "swamp thing" emphasis and a general lack of life, vitality, openness. In fact it sounded rather like someone had voiced the player to sound like what people think a turntable sounds like.

OK so every so often a component just doesn't do it for me and I write a mixed review trying to point out who might like the sound (not me) but to be honest even here I'd be struggling to find the plusses. OK if you've a nasty bright amp and speakers the Zero's might make the sum listenable but...

But I was bothered by it for other reasons... First AudioNote make top turntables (watch this space...) and so know what a turntable sounds like. Secondly, and much more importantly it was the direct opposite of the sound Werner found when he reviewed the AN DAC kit. He told me it would be "airy and open". Now Werner and I have shared several components in the past, and though our opinions of a piece of kit might vary it's obvious that in each case we're hearing generally the same thing but because of personal taste and very different systems we may differ slightly in the final analysis - which is precisely why we do it...

So... I contacted AN and asked what might be wrong, especially I wanted to cadge some of their cables to remove at least one variable. They happily send of two sets of AN-v silver cables and I tried again. Better, but still basically the same sound (nice cables though - review soon...), the Roksan Caspian being an altogether more interesting listen at 75% of the price...

One thing though, AN did say the combo took time to run in so I (happily) left them on repeat for two weeks whilst I listened to some records...

And that was it! The character changed, not a little bit, but to something totally different, and God be praised very much the way Werner described the sound. With the exception of some speakers (Lowthers take years to run in) I've never heard anything that took so long to come on song and which changed so completely during that time. I could speculate that those minuature valves are the culprets as valve gear does change dramatically as it burns in (see Korato review) but I'd be guessing.

This might seem a long-winded preamble (OK it is...) but it raises a couple of interesting points. First how many dealers are going to run in their demo models that long before they launch them on an unsuspecting public, and second what magazines do this for all the components they test (especially group test...)? So for anyone reading this positive review, don't email me to moan that the thing you've bought on my say-so is junk until you've had it a loooonnnng time....

So what follows is a review of a fully run-in Zero transport/DAC , could this be a world exclusive...?

Right now I'm listening to Shery Crow's "The Globe Sessions". This is a good test record because it features female vocal that hasn't been farted about with too much, a lot of "acoustic" stuff, real drums and some truly deep bass. It's also a fine mainstream studio recording.

First the voice, immediate and in front of the plane of the speakers. "It Don't Hurt" has a lot of close C&W type harmony which is obviously Ms Crow backing herself, often with a third voice joining with an Alto part and the increasingly popular asthmatic breathing in the background (why do it?). All this was nicely layered without drawing attention to itself. The following track "Maybe That's Something" opens with soft kick drum tapping your diaphram followed by some "Beatly" - "St Pepper" swirling effects, all beautifully handled, the bass kicks being there without dominating, the rest of the drum kit set back into a nice believable acoustic.

Moving swiftly on to the Pretenders "Last of the Independents" - a cracking if mixed album - the good news continues. This can be fiercely bright on CD players - bad enough to make you wince. Here the Zero's leave the aggression (and the asthmatic breathing on "Hollywood Perfume" - why do they etc...) and edge to the music without ever going over the top. This album is one of the best mainstream albums I know for stage depth, and with the Zero's the drumkit is miles back and crisp and tight in a big acoustic. The real bass guitar twanging like a rubber band like it should. On "Money Talk" the sound takes on scale and weight with it's driving doubled bass/kickdrum allowing Ms Hynde's stunning timing to dance around it - ever tried to sing along with her? Not easy, her phrasing is so jazzy, not unlike "Lady Day" herself. The Lyrics were also very easy to follow - important when they're that good

- "you can buy a squidgy little silicone sack, but it won't feed the world like the one's that I pack!" -

By now you can tell I like this pairing. They combine a sweet extend treble with a real punch in the bass. The midrange is open and revealing, high on detail and unusually coherent.

One disc though really showed the Zero's class and that was Naim Audio's CD of Ted Saratoga's "Rebel Souls" . This is an "audiophile CD", the sort of thing you hear at shows. The music's not bad if you're in to soft modern Jazz but it showed how the Zero could produce a big soundstage with the "played in a public toilet" acoustic such discs tend to have for some reason best known to themselves... But the actual disc is interesting for another reason. On track 1 ("Four Folks") the double bass is plucked hard, as only good bass players can do, and the result is the bottom string rattling on the fretboard on occasion. When Christopher Cabasse was here some time go with his Sloops he jumped up at this point looking for a fault in the speaker - and that's the problem, it doesn't sound right on most CD players, it intrudes, breaks the magic if you like. With the Zero's it was there but it was obvious what the sound was. I'd add that the cymbal that sung in the background had size - it did the "dustbin lid" bit which CD players find so hard, better than anything else I've heard.

Separately both components seem fine value for money. The transport is one of the cheapest available but doesn't look or sound it. For much of the test I thought the DAC 1.1x cost £1000 and judged it at that price - the actual price of £699 makes it even better:-) For a total of £1250, around some of the better integrated players, it offers the flexibility of separate components.

To call this a sweet, open combination would give only half the story, it also has terrific speed as slapped bass and rimshots show. In complete contrast to it's "new" sound it doesn't sound warm and cuddly but sparkling like a fine Muscadet after a cloying sweet Bordeaux. Unusually for CD it has much (but not all) the energy of good turntable. It's also well made and attractive so if you ignore the joke ergonomics and Christmas-cracker remote it's a fine advocate for CD.