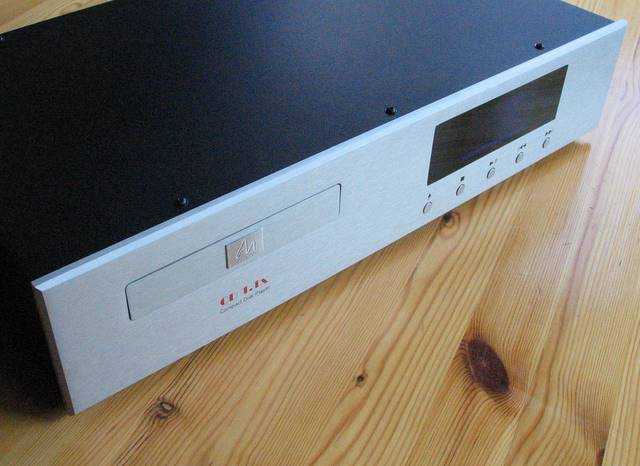 Audio Note UK are very well known for their high end audio components, and for their quite unique and strict philosophy about how good sound should be achieved. They don't use transistors, but rely on valves exclusively, for example. And they always have done so, not following any fashion or revival at any time. Audio Note UK also think that component quality is crucial to sound quality, and most of the better components they use are produced in house. There's also the strong conviction that silver is the best conductor and their, extremely expensive, top range products are almost completely wired in silver, including things like crossover inductors, audio transformers etcetera.

Another strong AN-UK conviction is that digital to analogue conversion should be done without any up- or oversampling, and even without any low-pass filtering, analogue or digital. This obviously means that all high frequency aliases of the audio signal are send to the amplifier unchanged. Not all amps will like this, and almost all CD players will filter these out. The point of up- and oversampling is to allow this filtering to be done with more gentle slopes, causing fewer problems within the audible part of the spectrum. But AN-UK think that doing away with filtering altogether is the best option, as the human ear cannot hear these aliases anyway and any attempt to remove them will deteriorate the sound. The same approach is being used by companies like 47 laboratory and Opera Audio, for example in the Opera Consonance CD120 Linear.

The AN-UK CD1.1x is the cheapest model in the current range, but fully subscribes to all the design principles mentioned above. It doesn't use oversampling or upsampling, the output of the DAC chip is not filtered, the output stage consists of a single miniature valve, the output is AC coupled by a pair of chunky Audio Note tin foil capacitors and the output connectors look like they're silver plated. The price for this basic model is also very Audio Note: at £1350 it's more expensive than many a company's top model!

So, this seems to be a real Audio Note player, and should be something special because of it. One thing that certainly isn't very special is the first impression, I do have to admit. The case work can only really be described as agricultural, if I'm honest. Although it is all put together well enough, it does make a quite basic impression. The player is small, not very heavy and very minimal with only a set of RCA outputs at the back and not even a digital output. I didn't like the look of the display very much and it isn't very clear when viewed from an angle. The remote is a very basic plastic affair. When you press 'eject' the tray comes out with a noise that makes one wonder if the machines hasn't broken. Where ever the money went in this machine, it certainly wasn't the cosmetics! 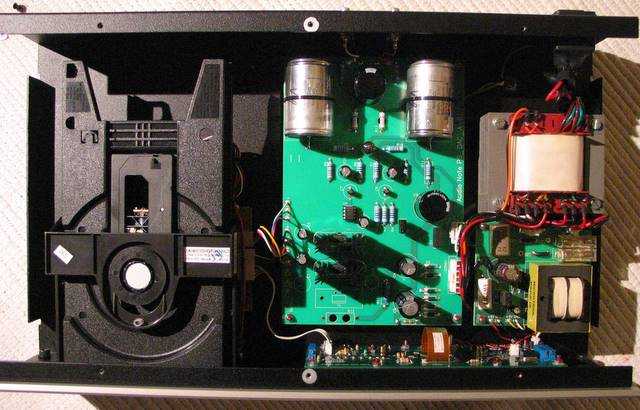 One look inside the player makes you wonder again where they've spend all that £1350, as there's not that much inside. The main PCB really has no more that 20 or 30 components on it, all very widely spaced. I have to admit that there are two rather large 'block type' transformers and that those big tin foil output capacitors look impressive. But just like the outside, it looks anything but expensive inside. Of course, all of this doesn't matter at all to me: if it sounds good I'm happy. I just mention it in case you do care about these things. Some friends did comment on the build quality and found it lacking in 'pride of ownership', given the asking price.

The single valve used is a 6111WA miniature type and is soldered in place, so cannot be replaced at all. AN claim a very long life of about 100,000 hours, which represents over 11 years of continuous use so there’s no real need for replacement, actually. There were no problems during the 2 months of the review period.

I have to start with a warning. This player will take quite long to burn in, and should be placed on a solid support. When I first installed it, unused and on one of the shelves of my old-fashioned Target rack, the player sounded quite muddled, rough and shouty. There were many good things to the sound too, but they were overshadowed by this rawness. It was only after a couple of hundred hours of use that things began to smooth out and the player started to sound a lot better. And when I put it on my big slate support, sat on 4 sorbothane feet itself, it really started to sing. All CD players do benefit from good support, but this one really, really needs it to bring out its talents. The player was used with my Django transformer preamp, my modified Electrocompaniet ECI-2 and my Dynaudio Contour 1.8 mk2 speakers.

When properly sited and run in, this player is something special indeed. I have never heard a CD player that is so vibrant, energetic and life-like as this one. It does have its preferences for certain music and recordings, it has to be said, but when it is good it is very, very good. One of its main characteristics is the impact with which music is being reproduced. Bass has real slam and the midrange is very articulated. Piano hugely benefits from this and shows great clarity and weight over its entire range and separate notes in a chord are easy to distinguish. The presentation as a whole has a lot of power and drive and is extremely engaging. The 'centre of propulsion' probably is a bit higher up the frequency range than with the Naim CD5x / Flatcap 2x player, but this player certainly has the same level of rhythm and pace. The midrange is very detailed and transparent and both bass and mid show excellent levels of texture.

Overall the Audio Note player has a personality that is a bit like a studio monitor loudspeaker, but without much bass limitations. Its strengths mostly come from the midrange and less from the frequency extremes, almost making it sound like a horn speaker from time to time. But it also is a very honest player that will show you what is going on without prettifying it. It isn't completely neutral, by the way, but it doesn't deviate from neutrality much. It is a very present player that can sound magical with good recordings, but will expose bad recordings with the same ease. It will always tell you what is on the disk without leaving much out. The only region where I had the feeling that it perhaps added something was the upper treble, which can be a little bit rough at times. It doesn’t suffer from the usual ‘digital edge’ by the way, which is a huge relief in itself, but it isn’t perfect either. I found this slight harshness to be quite bearable and actually think it is a good compromise in this case. Better show a slight flaw than trying to cover it up and make the whole sound suffer for it.

Spatial presentation is very good. The soundstage isn't overly wide and I've heard players with more depth, but the space it manages to project feels natural and correct. It is more forward than most players, but feels enveloping rather than aggressive. Instruments and voices have good, stable and well focussed locations within the whole. The stage doesn't go flat in complex parts, and individual details are well preserved with decent separation between sources. The tight and precise bottom end helps to convey the acoustic of the recording and gives the performers a strong physical presence.

The AN player was also tried in the system of a friend, where it fed an Anatek A50 integrated amp into a pair of Focal JMlab Chorus 714s speakers. It worked very well in that system too, although I needed to bring my slate and sorbothane feet before it sounded OK. My friend was slightly more critical about the top end of the player, perhaps because his speakers have metal tweeters. Combining it with aggressive sounding transistor amps or very sparkly metal tweeters seems unwise.

At the time of the review the Astin Trew AT3500 was present, and this player provided a very good comparison for the AN-UK player. The Astin Trew has a smooth and warm presentation, and given that it is about £200 cheaper than the Audio Note it did a very impressive job indeed. I used the Astin Trew with upsampling disabled, so both players were using the native 16 bit 44.1 kHz sample rate. It simply sounds more 'right' and natural to me. Proof again that Audio Note have a point with their purist 'zero-oversampling' approach.

The Astin Trew is warmer but the AN has more 'kick' down below. The Astin Trew is slightly more composed and has more tonal purity, while the AN can sometimes sound a little bit brittle in the upper treble. On the other hand, the Astin Trew can sound somewhat boring with less lively recordings while the AN is a very engaging player that always draws your attention. The Astin Trew has that magical richness in the midrange so typical for valve electronics, while the AN can sound a little bit stark in spite of also using a valve. The Audio Note has more 'bite' without becoming overly aggressive and puts the listener very close to the action, without being too forward. The Astin Trew can be a little bit too polite from time to time, but always seems to be well within its comfort zone while the AN leads a more dangerous life. Piano, again, shows off the strengths of the CD1.1x, even compared to the excellent Astin Trew: it just sounds powerful, clear and completely convincing.

Which player is the better one is more a question of taste and system context than a straight forward difference in overall quality. At times the AN sounded better, specifically with life recordings and CDs that could use a little extra sparkle. At other times the Astin Trew sounded better, especially with more complex music where it shows a bit more composure. The Astin Trew is also much kinder to lesser recordings. If one would call the sound of the Astin Trew 'comfortable' then the AN would be more 'confrontational'. The CD1.1x is a bit like drinking your coffee black: sugar and milk will make coffee easier to appreciate for most, but if you really like to taste the coffee itself you'll have to drink it black. The better the coffee, the better it will taste black and the Audio Note player certainly does have all the qualities needed to be appreciated without any additives. 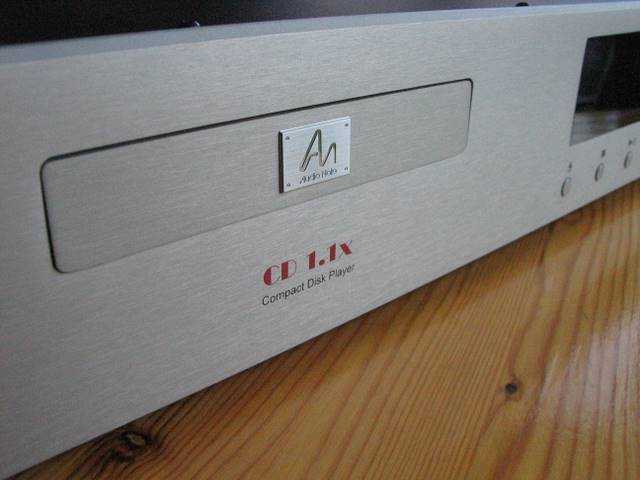 I have enjoyed my time with this player very much. It certainly is one of the better sounding machines I've had in my system. It does need a very solid support and takes forever to burn-in, so don't judge it too quickly. The ear will also need some time to adjust to the character of this CD player, as it clearly does things in a slightly different way as most other players. It does have a brutal honesty which makes some recordings sound better than others. It also has enormous talents, though, and sounds fantastically vibrant, life-like and dynamic. Bass is as good as it gets at this price and the midrange is glorious. The only small weakness is a slight rawness in the upper treble.

If you highly value the way your hifi looks or like excellent build quality then look elsewhere. If you really want a very smooth and comfortable sound there might be better options. Still, I don't hesitate to strongly recommend this player. It is something very special and if you like its personality you will fall in love with it for sure.