All time from the clock 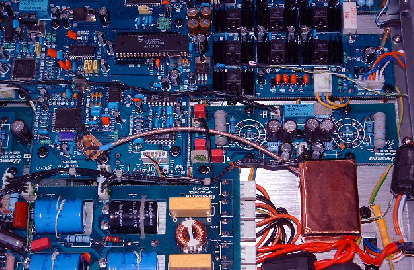 
These are tough times for stereo but this website continues to bang the drums and sound the trumpets for the formats that have already given us (sold us?) so much musical pleasure without distraction. We're also not involved in the format wars; how they sound is less important than catalogue availability. Given the entertainment industry's track record on formats the poor consumer can't expect format standardisation to happen before the world has higher speed broadband for pay-to-download high resolution music downloads (although Wanadoo's bizarre arrangements with line-providers have contributed to my being offline for over 2 months). File servers are cheaper to set up than pressing plants making early break-even points more attractive than duping discs. The format wars look likely to do for high resolution silver discs what similar industry in-fighting did for vinyl quadraphonic in the 70s and Betamax video in the 80s.

Vacuum State Electronics (VSE) are the well established commercial arm of prolific audio author and experimenter Allen Wright a New Zealander now relocated to Europe. His well researched and well written articles have interested Mark since the halcyon days of Sound Practices (order all the backnumbers & read & learn well) and Allen's website contains downloads of many of his well written treatises. The complexity of some of his upgrade packages requires the appointment of local agents in various parts of the world and in England this is Colin Yallop of Chevin Audio (not to be confused with a similarly named pro-audio company). Mark was interested in the name as Chevin is the name of a large hill overlooking his Derbyshire village, and it transpires that Colin does indeed operate from the next village. An early meeting was inevitable and Mark went round to hear his system.

Mark already knew a little about Allen Wright's famous SuperReg circuit and its application to valve HT supplies (the high voltage power supply that provides the means for voltage amplification), but Mark knew nothing of its application in cd players and solid state circuits. In particular the SuperReg gets applied to aftermarket cd clocks (from TentLabs) to reduce jitter even further than the changed clock alone may achieve. Ultra low jitter does seem to be one of the key factors in a successful musical experience from cd, having particular impact on timing and musical coherence and Les Wolstenholme's Avondale Alpha 5 cd player has already impressed Mark as having the finest PRaT (pace rhythm & timing) of any cd he's ever heard; the Avondale package also concentrating on an ultra-low jitter clock and very low-noise regulated power supplies to each circuit. Les usually confines his activities to Naim and Arcam cd players so we were interested to know if Colin could apply the VSE modifications to similar effect with David's Rotel RCD965BXdiscrete and Mark's Shanling CDT100c.

Colin had no experience of the Shanling so this was to be a double challenge. Mark swapped his Shanling for Colin's Sony SACD SCD555es modified to VSE level 4.5 and Mark settled down to hear a selection of SACDs loaned by Colin. TNT-audio want to review it mainly as a cd player as the SACD catalogue is arguably too patchy to justify it's presence in a system purely on its SACD strengths. On CD performance alone the VSE level 4.5 Sony player immediately impressed as a serious high-end contender so it's worth pursuing.

The player sits on the recommended Something Solid Dissipating feet, supplied in sets of three (hooray). By coincidence, the platform Mark usually turns to first is a prototype Something Solid made by Mark Orr 15 years ago. TNT Mark has not seen Mark Orr since that period. Mark Orr's Something Solid range are recommended by Colin and this reintroduction just illustrates what a small gene pool our hobby inhabits. 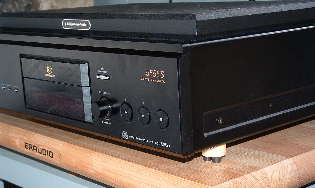 Mark tried various mains leads with the VSE level 4.5 Sony and noted only small differences between them, perhaps an indicator of the effective power supply isolation. The modified Sony's output is 11dB down compared to standard red book 2v because the VSE circuit has zero gain (and no feedback either) but this is still easily coped with by normal line inputs as well as cd inputs.

After a few days getting used to this machine Mark start to get broad idea of its strengths and limitations. Information retrieval is excellent, probably better than Mark's own reboxed Rotel RCD965BXdiscrete, better than the Shanling too, or even the Avondale. Presentation of pitch and timbre is flawless, instruments sounding natural and unforced. For a machine boasting a high-spec clock with a highly regulated power supply the modified Sony does seem a little off pace compared to the Avondale, which is in a PRaT class of its own for the flat-earth fraterity. The standard Shanling is paced way behind both but presents the most alluring soundstage of all four players.

After a few days Colin retrieves the player to install the VSE level 5 modifications newly arrived from Mr Wright. Mark installs the Avondale AAA5 in his reference system. The Avondale is ahead of the VSE level 4.5 Sony on pace, rhythm, and bass tightness and timing. The VSE Sony is substantially better in audiophile terms of soundstage (size & tangibility), vocal intelligibility and treble sweetness, although the Sony's treble timing sometimes seems a little incoherent.

Colin returns the VSE Sony with Level 5 modifications and a kimber mains leads that he finds suits the player best.

Immediately the level 5 gains are obvious. Level 5 is technically similar to Level 4.5 plus a reduction in noise of the masterclock power supply which means even less jitter. The only other difference is the 10cm analogue output cable upgraded to silver in Level 5. But the audible improvements over Level 4.5 are disproportionate.

The Something Solid feet are complex isolators with 3 wooden nipples on each wooden cylinder supplied in sets of three (hooray, 'cos four is superfluous). A BrightStar LittleRock 4 damping block is placed on top of the Sony to damp the top cover even further than the VSE internal damping treatment and a LittleRock 5 damps the clangy top plate of the Avondale, both bringing a worthwhile improvement.
Trying different interconnects, solid-core suits the VSE Sony, while multistrand suits the Avondale, both identical conductor & insulation materials from the same manufacturer.

On the SACD discs supplied the modified player resembles a typical top amateur reel-to-reel recorder (Revox B77 for example) or a very good FM radio broadcast. An experienced listener hearing this player blind in SACD mode would be more likely to guess a low colouration analogue source than typical cd replay. If cd had originally been this good there would have been no backlash and the analogue lp would not now be the software medium comfortably outselling SACD and DVDA combined.
The single layer SACD of Dave Brubek's Time Out sounded almost as dynamic as Mark's lp original but less coloured than vinyl, noticable when his son plays Take Five on his alto between each playback.

More important is the Red Book cd replay quality because the catalogue breadth means that this player is as often likely to be playing a Red Book cd as SACD, except in those rare systems where a different player is dedicated to each format. Using Mark's judging system notes to keep track of the differences over extended listening sessions he finds that each player's strengths are consistently noted, but that each tend to balance the other over a selection of discs. The Avondale still turns trumps on the traditional flat-earth virtues of Pace Rhythm and Timing (PRaT) but that the VSE Sony SCD555es makes equal gains in the traditional BBC monitor virtues of accuracy, vocal tonality, instrumental timbre, and warmth without obvious colouration. The VSE Sony excels with naturally recorded material of any genre like Chesky Jazz recordings, while the Avondale cuts through with the hard edge dynamics of material like Neil Young. If a Naim 250 is your favourite power amplifier you'll probably prefer the Avondale but if Audio Research (or even single ended triodes) light your fire you'll probably demand the VSE Sony.

Mark wants everything and owns several power amplifiers because he's incapable of these tough choices so we cannot tell you which is right for you. If you own a standard Sony player and want something better the VSE Level 5 upgrade package would make much more sense than buying a more expensive player. We cannot vouch for any of Allen Wright's other agents, but Colin Yallop at Chevin Audio has a good bench of test gear and the knowledge to use it, ensuring optimum installation of the Vacuum State Electronics modifications.

Colin's dedication to upgrading the Sony SACD range is understandable, considering how good SACD is as a medium, but format wars leave TNT-Audio writers cold. It would have been better if SACD had been the original silver disc standard, as the red book remains so obviously flawed. However, we live in the real world where SACD & DVD-A sales together do not equal vinyl so their future is very uncertain.
The Vacuum State Level5 modified Sony SCD555es is a stunning performer more like good analogue reel-to-reel than any other comparison, and if the SACD catalogue meets your needs we recommend you buy discs now, while you still can, and play them on this gem.

But, if you already have a good quality CD player that you like and which is, say, under ten years old, you should consider upgrading it. In Part 2 Mark & David submit their own very different cd players to Colin for surgery.

Colin Yallop demonstrated his skill at implementing the VSE modification package to a player Allen Wright designed the package to improve. The challenge for Colin will now be whether he can pursue a heuristic development programme from scratch on two very different red-book cd players.